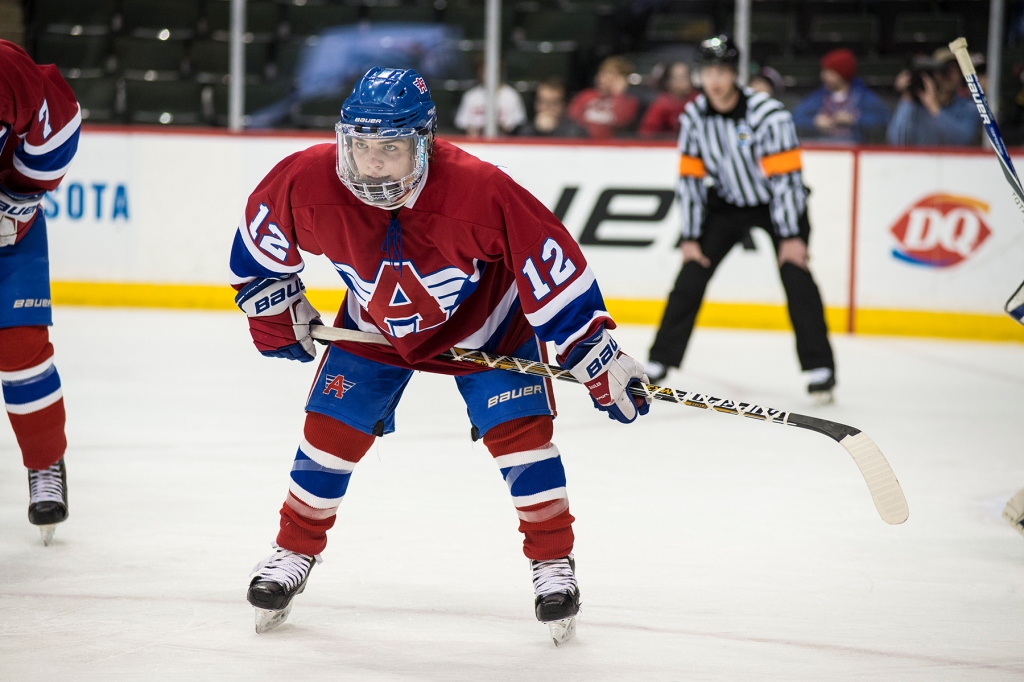 This week’s Class 1A rankings remain the same in the top three spots — No. 1 Hermantown, No. 2 Breck, and No. 3 Mahtomedi — but head to head results in the back of the top 10 created significant movement. St. Cloud Apollo and Hibbing made the biggest leaps by beating fellow top-10 residents, while Delano reentered the polls by scoring 15 goals in two games against St. Cloud Cathedral (which dropped out of the top 10) and previously unbeaten Litchfield/Dassel-Cokato.

This coming week marks the final set of games before the holiday tournaments begin in earnest. Believe it or not, most teams will be about 40 percent of the way through their regular season at that point, which makes early season hiccups look more like a trend than exceptions.

The Hawks were the only team from last week’s top-five that didn’t lose last week, which keeps them atop the rankings. Instead, Hermantown put up terrific defensive efforts against two strong Class 1A teams, allowing one goal each to Duluth Denfeld and Thief River Falls while outshooting them by a combined 91-46 margin. Cole Koepke (6-5-11) tallied two goals in each game, while Ryan Sandelin (8-4-12) recorded a goal and an assist in each. Not surprisingly, the pair lead the Hawks in scoring, ahead of defensemen Eric Gotz (1-7-8) and Wyatt Aamodt (2-5-7). Hermantown will be tested in the week ahead, traveling to Class 2A Minnetonka and New Prague, which has scuffled this winter but has back-to-back state tournament appearances.

Despite losing last week, Breck holds onto the No. 2 spot in the rankings. There’s no shame in falling in an overtime game to Class 2A top-10 ranked Wayzata on the road. The Mustangs went toe-to-toe with the Trojans and actually led for much of the game on a first period goal by Will Blake (6-10-16) before Mark Senden scored twice late to give Wayzata the victory. Breck returned to action two days later and rolled over St. Paul Academy, 6-0, with Carter Breitenfeldt (4-4-8) scoring twice and Tyler Scott (5-8-13) recording a goal and three assists. Sophomore Linden Olness (6-1-0, 1.73, .911) continues to grab hold of the starting goaltending job, stopping 39 of 41 shots in the two games.

The Zephyrs also lost a game last week, but like Breck’s loss to Wayzata, Mahtomedi’s defeat was to a highly-regarded Class 2A team in Hill-Murray, 4-2. And like Breck, Mahtomedi retained its No. 3 spot in this week’s rankings. Coach Jeff Poeschl’s team has generally played tight, low-scoring games, although the week did begin with two big victories over North St. Paul and Tartan. Andrew Kangas (2-8-10) leads the Zephyrs in points, while Luke Posner (4-5-9) is the only player with more than three goals. As expected, veteran goaltender Will Swanson (4-2-0, 1.83, .935) has been terrific in net.

Apollo made a big move up the rankings this week, rising from the No. 8 spot after edging No. 10 Sartell-St. Stephen in overtime, 4-3, and beating crosstown rival St. Cloud Cathedral, 4-1. But it wasn’t easy. The Eagles rallied from a 3-1 third-period deficit to Sartell, with Brandon Bissett (4-3-7) and Noah Bissett (2-3-5) scoring in the final 2:40 of the third to tie the game and leading scorer Gino Lucia (4-6-10) netting the winner 1:41 into overtime. Apollo also had a big third period against Cathedral, scoring four times to erase a 1-0 Crusaders’ lead after two. Trevor Vossen (2-2-4) had his first two goals of the season in the late rally. This week, Apollo hosts two teams who are perennially strong Class 1A programs (Fergus Falls and Mankato West) before traveling to Rochester Lourdes.

The Bluejackets remained unbeaten with a pair of one-goal wins in their northwestern road trip, edging East Grand Forks and Crookston by identical 3-2 scores. The game flow was quite different in each, however. EGF outshot the Bluejackets 28-14 and controlled play for stretches of the game, but Jake Bestul (3-9-12) gave Hibbing the victory by breaking a tie with 2:45 remaining. Junior defenseman Scott Perunovich (3-16-19) assisted on all three goals. At Crookston, the Bluejackets turned the tables, outshooting the Pirates 14-1 in the first period and 31-20 for the game. Perunovich picked up two more assists and Jarrett Lee (7-6-13) had two goals. Hibbing has an interesting Section 7A road game Tuesday at Greenway, which has started the season well.

Welcome back to the rankings, Delano. After beginning the season in the top 10, the Tigers dropped out after an early December loss to Buffalo in which their normally potent offense was limited to two goals. It struck back in a big way this week, as the Tigers poured 15 goals in victories over St. Cloud Cathedral and Litchfield/Dassel-Cokato. Jesse Lawman (5-8-13) had a hat trick in the Cathedral game, while Ben Meyers (10-14-24) scored twice in each game and leads the Tigers in scoring. Coach Gerrit van Bergen continues to rotate three goaltenders, as Erik Peterson (2-0-0, 2.50, .902) started against LDC and Jackson Hjelle (3-1-0, 3.36, .875) got the nod against Cathedral. Delano has a light schedule heading into the break with only a game at Hutchinson on tap.

The Spartans hang onto a top-10 ranking by a narrow margin after a tough week that ended up with two losses, 4-3 against unranked Bloomington Kennedy and 6-0 to No. 2 Breck. The Kennedy loss doesn’t undo the Spartans’ excellent results thus far, however, as they’ve already beaten Luverne and East Grand Forks. Still, momentum is not on the Spartans’ side. SPA outshot Kennedy 37-19, but couldn’t solve goaltender Jimmy Mrozek, who made 34 saves. Breck stymied the Spartans’ offense, as well, outshooting them 43-17. Coach Matt Funk’s offense must get healthy for SPA to hang onto the rankings, although games this week at Rochester John Marshall and home to Henry Sibley could help.

The Green Wave continue to hang onto a top-10 ranking, despite injuries and new pieces being integrated into the lineup. Grant Loven, one of the heroes of last year’s state title, has yet to return to the lineup. He should boost the EGF offense, which was limited to seven goals in three games last week. Power forward Tanner Tweten (7-5-12) played the hero last Friday night against Class 2A top-10 Bemidji, scoring with nine seconds remaining to give the Green Wave a tie against a top foe. Tommy Pace (4-1-5) picked up a hat trick at Kittson Central and Nick Derrick (5-3-8) had the only two goals against Hibbing. They’re two of the Green Wave who must pick up the scoring slack.

A loss at Hermantown last Saturday extended Thief River Falls’ losing streak to three games, but the Prowlers bounced back with a shutout of Section 8A rival Warroad to close last week. The three losses were all to teams ranked ahead of the Prowlers, however, in No. 1 Hermantown, No. 2 Breck and top-10 Class 2A Bemidji. Senior Ethan Johnson (12-3-15) scored again last week, and now has tallied as many goals as the rest of the Prowlers combined, 12 each. Coach Tim Bergland’s team will have to get more balanced scoring to rise further in the rankings. Thief River Falls plays at Crookston on Saturday before heading into the holiday break.

After cracking the rankings for the first time last week, Sartell-St. Stephen remains in the No. 10 spot despite splitting two games. The Sabres actually led No. 4 St. Cloud Apollo 3-1 late in the third period last Friday before letting the victory slip away. Spencer Meier (3-8-11), Alec Adelman (1-2-3) and Matthew Moran (3-7-10) scored for Sartell, but the Sabres allowed two goals in the final 2:40 of regulation and the overtime winner just 1:41 into the extra session. Senior Colin Johnson (6-4-10) made sure the loss didn’t begin a streak, however, tallying four goals in a 5-4 victory at Sauk Rapids-Rice on Saturday, including the tie-breakder with 4:12 left in the third.