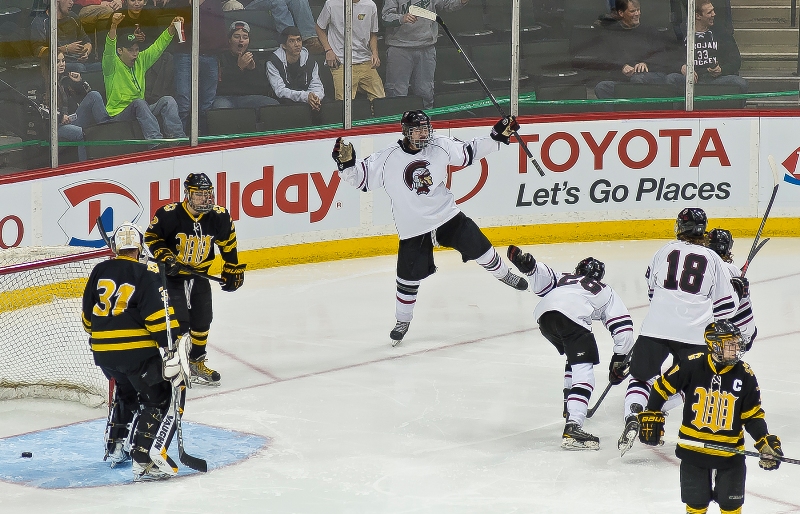 There wasn’t a lot of movement in the Minnesota Hockey Magazine’s Top Ten rankings in Class 1A this week, as most of the top teams enjoyed winning weeks. A few teams flipped places, including another notch for now No. 2-ranked Duluth Marshall and No. 5 New Prague, both of whom remain undefeated — the only two teams in the top 10 without a loss.

Duluth Marshall, unranked to begin the season, has surged behind an impressive 7-0-0 start that included a great victory over Class 2A powerhouse Grand Rapids last week. Meanwhile, New Prague already has four one-goal victories in six games this year.

They’re not the only two unbeaten teams left in Class 1A, however. Keep an eye on a few teams outside the top 10 who have yet to suffer a loss, such as Alexandria and Sartell-St. Stephen from Section 6A, Hutchinson in Section 3A, and a 7-0-0 St. Paul Como Park team that has allowed only 0.57 goals per game, albeit against a light schedule.

East Grand Forks retained its top spot in the rankings based on a dominating home victory over Crookston, a game that harkened back to last season’s “defense first” mentality. The Green Wave allowed only seven shots on goal, including one each in the final two periods, to overwhelm the Pirates. Reed Corbid (1-3-4) had a hand in all three goals (one goal, two assists) but is only eighth on the team in scoring behind University of North Dakota-bound Dixon Bowen (10-8-18), Tanner Tweten (4-9-13) and others. This week brings a tough test for the East Siders with a road game against probable Section 8AA favorite Bemidji and the game circled on every Green Wave’s calendar, a home game against Section 8A rival Warroad.

Looks like the Hilltoppers are for real. In one of its biggest tests of the early season, Duluth Marshall grabbed an early lead at Grand Rapids and held on to beat the Thunderhawks, 4-2. Derek Farrell (5-7-12) and John McKenna (6-4-10) each had two goals and senior goaltender Alex Murray (5-0-0, 1.17, .952) stopped 25 of 27 shots. Believe it or not, the two goals Murray allowed was 50 percent of his season total to that point, as he has two shutouts in five starts. Over the holidays, we could be in for a treat as the Hilltoppers host their annual tournament that will include No. 1 East Grand Forks, No. 4 Hermantown, Delano and Mankato West — along with three top Wisconsin schools.

Mahtomedi finally suffered its first loss last Saturday, losing 5-1 at Hill-Murray. It’s tough to knock the Zephyrs too far down the rankings for a loss to a top-five Class 2A power like Hill-Murray, but with Duluth Marshall continuing to win, the two teams flipped. The Pioneers managed to shut down a Zephyrs offense that had scored 28 goals in its first five games. Joe Forciea (2-5-7) gave Mahtomedi a 1-0 lead nine seconds into the second period on the power play, but the Zephyrs allowed five unanswered goals. Will Swanson (5-1-0, 2.17, .920) has played every minute in goal and is among the Class 1A leaders in goals against and save percentage. He’s allowed one or fewer goals in four of his six starts, including an 8-0 shutout of North St. Paul last Thursday.

The Hawks hang steady in the No. 4 spot in this week’s rankings, courtesy of a hard-fought 3-1 victory over Section 7A rival Duluth Denfeld and a surprising 8-2 outburst at Thief River Falls. The normally stout Prowlers defense was peppered by Hermantown’s Ryan Kero (6-9-15) and Nate Pionk (10-6-16), who combined for five goals in the game and lead the Hawks in scoring. Hermantown already has two losses, but both have come against highly-regarded Class 2A teams Wayzata and Hopkins. Coach Bruce Plante challenges his Hawks with a tough schedule of big schools, as the Hawks still play six more Class 2A teams after the new year, including Grand Rapids, White Bear Lake, and Bemidji.

All New Prague does is win. With four one-goal victories in six games, the Trojans aren’t blowing the doors off anyone, but they are winning. Last week came two more one-goal wins against Class 2A Holy Family Catholic and a tight one against Rochester Lourdes, likely the Trojans’ chief competition in the Section 1A race this winter. Ryan O’Rourke (2-2-4) broke a 1-all tie with 1:05 left in the game and senior goaltender Conner Wagner (6-0-0, 1.50, .941) made it stand up, stopping 15 of 16 shots. New Prague will certainly rise in the rankings with another unbeaten week, as Orono and Hermantown loom on the schedule.

The Warriors slipped a spot in the rankings after suffering their first two losses of the season. Neither is a back-breaker, however, as they came at the hands of the likely favorite in Section 8AA (Bemidji) and a North Dakota team that also recently upended top-ranked East Grand Forks (Grand Forks Red River). In fact, Warroad put up a better effort against the Rough Riders than their Section 8A rival, as Bobby Astrup (1-1-2) scored the only goal allowed by Red River in the two games. Now comes a chance for Kobe Roth (5-3-8), Beau Wilmer (4-4-8) and the Warriors to state their case in the section seeding with road games at Thief River Falls and East Grand Forks this week.

Breck continued its win one, lose one start to the season, falling to Mahtomedi on Tuesday night and winning big at Chanhassen on Thursday. The Mustangs have already lost three times in seven games, but all were against teams currently ranked Nos. 1 to 3 in the Class 1A poll (4-1 at East Grand Forks, 2-0 at Duluth Marshall, and 3-1 to Mahtomedi). Goal scoring has been an issue in the losses, as the Mustangs have just two goals in three games. But in their four victories, Breck has 21 goals, led by four each from Chase Ellingson (4-6-10), Tyler Scott (4-5-9) and Will Blake (4-4-8). More offensive consistency will be key for Breck to make its annual playoff run to the state tournament.

There was no hangover for Duluth Denfeld after losing to its Section 7A rival Hermantown last week, as six different goal-scorers helped the Hunters blitz St. Francis last Saturday and keep them in the No. 9 spot in the rankings. Cody Budisalovich (3-6-9) had three assists to go with his goal in that game, while Dylan Michaud (2-7-9) and Nick Thompson (4-6-10) each had a goal and two assists. Those three also lead the Hunters in scoring, while Jake DeCaro (5-0-5) tops the team in goals. Coach Kevin Smalley has one of the better goaltending duos in the state in senior Westley Cook (3-1-0, 3.25, .845) and junior River Alander (2-1-0, 1.67, .942).

As expected, Luverne returned to the southwest corner of the state and hammered a couple of Big South Conference teams by a combined 23-3 score. Junior Chaz Smedsrud (11-18-29) and freshman Jaxon Nelson (11-14-25) are among the state’s top scorers, although fellow freshman Kasyn Kruse (8-8-16) had a 10-point week. But there’s something to be said for meeting expectations. The Cardinals should continue to run roughshod through the southwest, with a few tests thrown in. The first resulted in a loss to St. Paul Academy and the next big game Cardinals’ detractors are pointing to is a Dec. 23 game against Totino-Grace, the team that beat Luverne 4-3 in double overtime in last year’s Class 1A state consolation final.