Mustangs gallop past Hermantown to claim No. 1 spot 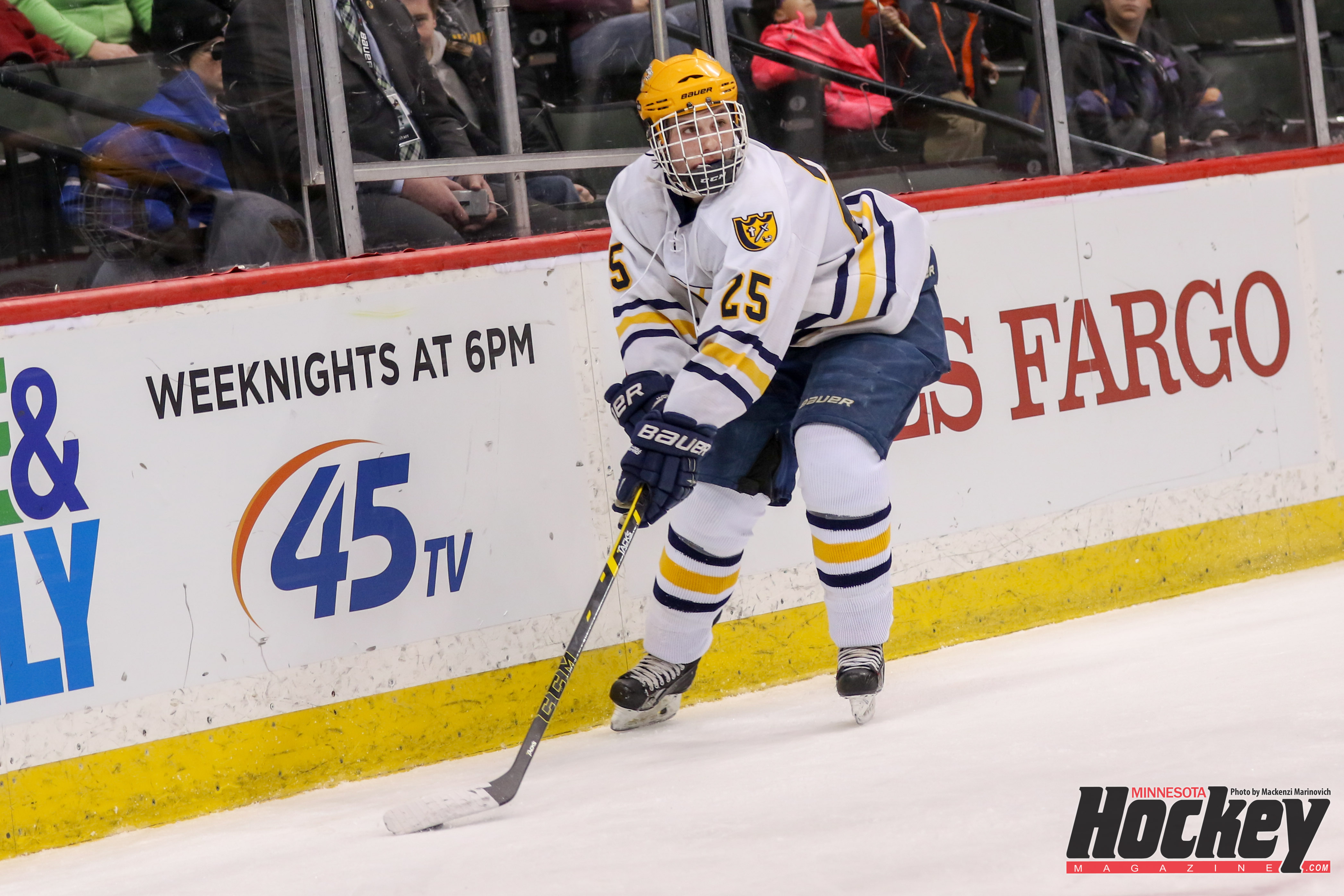 Junior defenseman Dalton Weigel’s 15 point leads the Breck defensive corps helping to lift the Mustangs to the top spot in the CrankyApe.com Clas 1A rankings for the first time this season. (MHM  File Photo / Mackenzi Marinovich)

Mustangs gallop past Hermantown to claim No. 1 spot

After a tumultuous shuffling of the bottom half of the top-10 in last week’s Class 1A rankings, this time we have movement among the top four, as all are in a different spot than last week. Breck’s big week propelled the Mustangs into the top spot ahead of No. 2 Hermantown, which lost its first game of the year in a shutout at Minnetonka. Both No. 3 St. Cloud Apollo and No. 4 Mahtomedi swept their weeks, although Apollo’s recent run caused a flip in their rankings.

Meanwhile, spots No. 5 through 10 remain intact, as other than a loss to the best team in North Dakota (Grand Forks Red River) by No. 8 East Grand Forks, all won out heading into the holidays.

Keep an eye on the holiday tournament schedule, as most of the top teams should face stiff competition. Breck and Mahtomedi face Class 2A teams in the Schwan Cup Silver Division, while St. Cloud Apollo, St. Cloud Cathedral, and No. 10 Sartell-St. Stephen all play each other in a great Granite City Classic field. Also, Hermantown and No. 6 Delano square off in the quarterfinals of the Hilltopper Holiday Classic in Duluth.

Breck isn’t just winning games, its taking care of business in impressive fashion. The Mustangs rolled through two tough Class 2A teams (Duluth Marshall and St. Michael-Albertville) and a team on the fringe of the Class 1A top-10 (St. Cloud Cathedral) by a combined 24-3 score last week. The Mustangs’ only loss was a 2-1 overtime game at Wayzata on Dec. 10. In the four games since, they have scored new fewer than six goals and allowed only three total goals. That’s dominance. Chase Ellingson (14-18-32) and Mitch Machlitt (14-9-23) each tallied a hat trick against STMA and share the team’s goal-scoring lead. Six other players already have at least 10 points, so the expected offensive strength of Breck has come to pass. Defensively, the Mustangs have been just as impressive, however, with goaltender Linden Olness (9-1-0, 1.60, .917) stepping in seamlessly for graduated Brimsek Award finalist Stephen Headrick.

Hermantown suffered its first loss of the winter last week, falling 3-0 at Minnetonka. That defeat — along with a tie to Hopkins two weeks before — was enough to push the Hawks down to the No. 2 spot this week. It’s not an indictment of Hermantown’s vulnerability as much as it is a reward for Breck’s absolute dismantling of good teams lately. The Hawks did respond to the loss as good teams should, beating the next two Class 1A teams by a combined 16-2 score. Ryan Sandelin (12-9-21) and Cole Koepke (12-9-21) each recorded hat tricks in Hermantown’s 10-0 win over Eveleth-Gilbert last Tuesday, while defenseman Wyatt Aamodt (2-11-13) contributed six assists. Not surprisingly, they are the Hawks’ top three scorers this winter. A great test comes in the Hilltopper Holiday Classic in Duluth on Tuesday, as the Hawks play No. 6 Delano in the quarterfinals.

Just as Breck jumped over Hermantown in the rankings due to impressive recent results, so did Apollo leap past Mahtomedi for the No. 3 spot. The Eagles continue to play the same strong defense that led to last year’s state tournament run, as they’re allowing only 1.75 goals per game in front of senior goaltender Nick Althaus (7-1-0, 1.75, .910). Since a season-opening 2-1 loss at Bemidji, Apollo has won seven straight games, never scoring fewer than four goals. That added offense is what makes Apollo a state title contender this winter. Gino Lucia (7-11-18), the nephew of Gophers’ coach Don Lucia, leads the Eagles in scoring, just ahead of top defenseman Tanner Breidenbach (6-11-17).

Mahtomedi will have to make hay against a pair of Class 2A teams in the first two rounds of the Schwan Cup Silver Division, but could conceivably collide with top-ranked Breck in the final round, which would be a great holiday treat for fans of Class 1A hockey. The Zephyrs had a light week, winning their only game at Henry Sibley last Friday, 5-0. Mahtomedi outshot the Warriors 54-20, yet the game was scoreless until midway through the second period. Over the final 25 minutes, however, Tim Kuivinen (5-6-11) and Andrew Kangas (5-10-15) took over, combining for all five goals and two assists. That outburst has them tied for the team lead in goals. Senior goaltender Will Swanson (5-2-0, 1.57, .942) has been as good as advertised, with two shutouts and two other games with only one goal allowed.

The last remaining unbeaten team in Class 1A, Hibbing/Chisholm passed its biggest test so far by winning at Greenway on Tuesday night, 4-2. Junior defenseman Scott Perunovich (7-23-30) had two goals and two assists, while Jake Bestul (5-13-18) scored the tie-breaking goal 4:55 into the third period for the Bluejackets. Perunovich is one of a dozen Minnesota high school players ranked by the NHL Scouting Bureau for the upcoming draft, given a “C” grade. The Bluejackets host a small two-game holiday event this coming week, including what could be a great game against Brainerd to kick it off on Monday. The Warriors are coming off a victory against Moorhead and their only loss is a forfeited game at Bloomington Jefferson (which they had won 11-9).

The usual suspects powered Delano to a 6-0 victory at Hutchinson in its only Wright County Conference game last week. Leading scorer Ben Meyers (13-12-25) picked up a hat trick and goaltender Jackson Hjelle (4-1-0, 2.57, .891) earned the shutout with 13 saves. Justin Daly (3-5-8) also added two goals and two assists as the Tigers outshot Hutch, 39-13. The Tigers should be well-rested for a big holiday tournament slate. Earlier this winter, Delano’s first crack at a top-four Class 1A team resulted in a firewagon 9-7 loss to Breck. This coming week, the Tigers take aim at No. 2 Hermantown in the quarterfinals of the Hilltopper Holiday Classic. A victory there should vault the Tigers into the top five and signify their rise as a state contender.

St. Paul Academy got back on the winning track last week, beating Rochester John Marshall and Henry Sibley to erase a two-game losing skid. Leading scorers Matt Dahlseide (9-9-18) and Jack Johnston (9-8-17) had big weeks, combining for seven goals and four assists in the two games, while sophomore goaltender Andy Beran (6-3-0, 2.73, .892) stopped a combined 33 of 36 shots. With Dahlseide and Johnston just juniors, it shows the youth of the Spartans’ team — six of SPA’s top eight scorers are juniors. The Spartans travel north for the holidays, as they take on Mankato West in the opening round of the Duluth Heritage Classic, which also includes Duluth Denfeld, St. Louis Park, Apple Valley, Owatonna, and a pair of strong Wisconsin teams.

East Grand Forks enters the holiday break coming off a 4-3 loss at interstate rival Grand Forks Red River on Tuesday night. It’s not a bad loss, as the Roughriders are unbeaten and the unanimous top-ranked team in North Dakota — and likely to win the Gambucci Cup that goes to the top Grand Forks area team each season. The Green Wave are the only top-10 team to take the holidays off, however, and won’t be back on the ice until a home game against Detroit Lakes on Jan. 2. Senior power forward Tanner Tweten (7-6-13) continues to lead the Green Wave in scoring, but could get help when Grant Loven returns. After a tough weekend in the Twin Cities in early December, senior goaltender Jarod Reak (7-4-1, 2.78, .860) has been solid, stopping 103 of the last 114 shots (.904).

The Prowlers offense erupted in a 7-3 victory at Crookston last Friday, their only game of the week. After scoring no more than three goals in seven straight games — three of them losses — Thief River Falls scored four in the first period alone against the Pirates. Michael Johnson (5-9-14) scored once in each period for the hat trick, while leading scorer Ethan Johnson (13-4-17) had two goals and an assist. Along with Lucas Magnusson (3-7-10), they are the only Prowlers with more than two goals on the year, however. Thief River Falls hosts an interesting tri-state holiday tournament this week, playing games against teams from Minnesota (Alexandria), North Dakota (Fargo North), and Wisconsin (Chippewa Falls).

The Section 6A race will get sorted out quite a bit at this coming week’s Granite City Classic, with the three top contenders — St. Cloud Apollo, St. Cloud Cathedral, and Sartell-St. Stephen — all scheduled to play each other. The Sabres have won three straight games since losing in overtime to Apollo on Dec. 11, including a pair of wins last week. Colin Johnson (8-8-16) and William McCabe (5-6-11) scored two goals each at Willmar and goaltender Matthew Partch (8-2-0, 2.49, .896) recorded an 18-save home shutout of Monticello/Annandale/Maple Lake. Sartell will have to have a good result in the Granite City to hold off a few of the teams on its heels, including Cathedral.