Balanced attack has Duluth Marshall atop the Class 1A hill 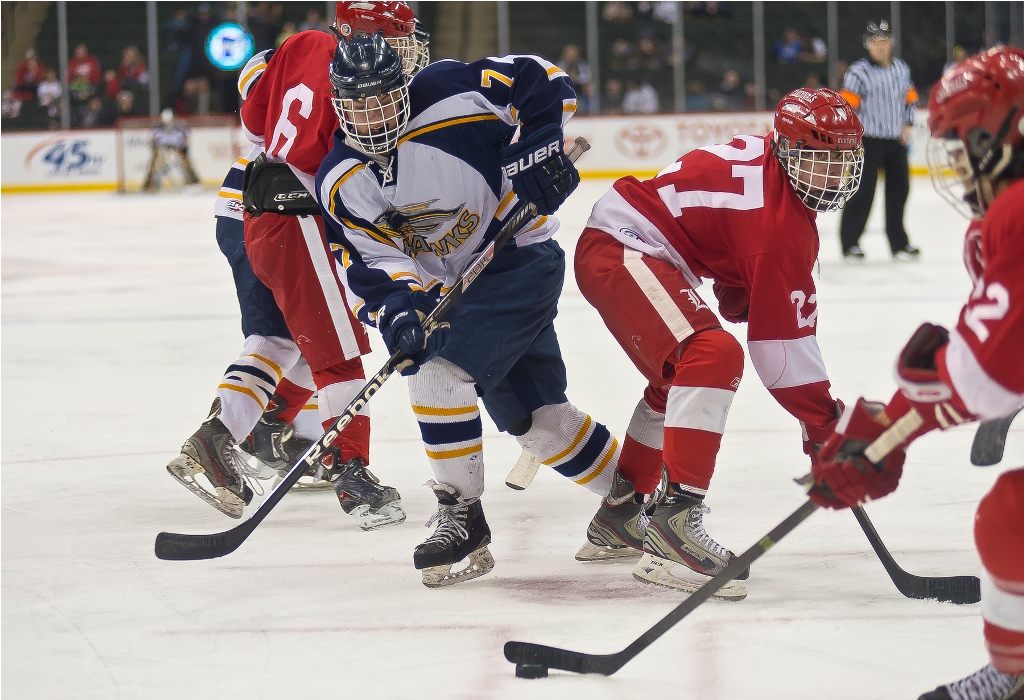 Hermantown’s Ryan Kero has helped lift his team to the No. 2 spot in this week’s MHM Class 1A rankings. (Photo / Tim Kolehmainen)

Balanced attack has Duluth Marshall atop the Class 1A hill

There’s a new team atop the Minnesota Hockey Magazine Class 1A Top 10 rankings this week, as Duluth Marshall has ascended to the No. 1 position courtesy of its perfect start, while East Grand Forks fell to No. 3 after losing its second game of the season.

Honestly, there is a razor thin margin amongst the top four teams in the poll, as none of them has lost to another Class 1A team yet this year (Hermantown’s two losses were to Class 2A teams, as was Mahtomedi’s lone loss, and East Grand Forks has lost to a Class 2A team and the top-ranked team in North Dakota).

How to sort out that mess?

Well, Duluth Marshall is the only one with a perfect record yet.

This week: vs. Benilde-St. Margaret’s (Tue)

The Hilltoppers gave up more than three goals for the first time all season in their lone game last week, but still managed to beat Rochester Lourdes, 5-4, as Jack Dodd (4-5-9) tallied a pair of third-period goals and Nathan Sepp (3-5-8) lit the lamp twice in the second period. A sign of the ‘Toppers balance? Those two are just sixth and seventh on the team in scoring behind Derek Farrell (5-9-14), John McKenna (7-5-12) and company. But Marshall’s biggest strength so far has been its defense, anchored by Jordan Fralich (2-7-9) in front of goaltender Alex Murray (6-0-0, 1.63, .930). Murray has allowed just 10 goals in his six starts and has two shutouts, while backup Cullen Mudrak (2-0-0, 1.50, .880) also has a shutout already.

This week: at Eveleth-Gilbert (Tue)

In its last three games, Hermantown has cut through three of the better Class 1A teams around, beating Duluth Denfeld, Thief River Falls and New Prague by a combined 17-4 score. That’s more like what’s expected from the Hawks, who have finished as the state runner-up the past five years. Seniors Ryan Kero (7-13-20) and Nate Pionk (10-7-17) were a two-man wrecking crew against Thief River Falls, combining for five goals and 10 points. Not surprisingly, they lead the Hawks in scoring. One of coach Bruce Plante’s biggest concerns entering the year was in goal, where both of last year’s regulars graduated. But junior Luke Olson (6-1-0, 1.94, .904) seems to have grabbed hold of the position, starting each of the last three games, stopping 60 of 64 shots.

Despite remaining unbeaten against Class 1A teams and soundly beating rival Warroad last week, the Green Wave fall from the top spot in the rankings. A 2-1 loss to Bemidji is what did in East Grand Forks, for while the Lumberjacks are a solid Class 2A team, they’re not a superpower. It was good to see the Green Wave rebound from that loss with a 6-2 romp over Warroad last Friday. The Warriors actually led 2-0 midway through the second period, but EGF scored the final six goals, two each from Dixon Bowen (12-10-22) and Tanner Tweten (6-10-16). Just as impressive, the Green Wave outshot Warroad 41-15. Bowen is the engine that drives the Green Wave this winter after the defense was key to last year’s state championship. The University of North Dakota recruit ended a short, two-game goal-scoring drought with his outburst against Warroad.

This week: vs. Roseville (Tue)

Mahtomedi sandwiched its only loss of the season (5-1 at Hill-Murray on Dec. 13) with a pair of shutouts, including last week’s 6-0 blitz of Chisago Lakes. The Zephyrs have tremendous scoring balance so far this year. Jack Heinsch (5-4-9) and Jack Becker (5-4-9) share the team lead in scoring with Joe Forciea (3-6-9), but 17 players have at least two points and 14 have tallied a goal. That kind of scoring depth makes coach Jeff Poeschl’s squad a tough match-up for any smaller program. Mahtomedi has been just as impressive defensively, as well, allowing only 1.86 goals per game — and more than one in just two games.

Who is this Warroad team? Certainly not the same high-scoring bunch that rolled through last season. Ten games into the new year and the Warriors and their opponents have just 4.4 goals per game. Combined. For both teams. Warroad hasn’t scored more than four goals yet this year and has allowed more than three just twice. It all boils down to games similar to last week’s victory, a 1-0 grinder over Thief River Falls on a second period tally by Baihly Hontvet (3-0-3). After scoring more than 90 points last year, senior Kobe Roth (5-3-8) is finding the going tougher without his two departed linemates. He hasn’t scored since a goal against Grand Rapids on Dec. 6, although he missed the loss to East Grand Forks with an ankle sprain.

After a busy early schedule that gave it three losses, Breck had only one game in an 18-day span through the middle of December. The Mustangs took care of business with a 4-1 defeat of Holy Angels, scoring three times in the third period to break open a close game. Mitch Machlitt (3-4-7), Grant Parrish (3-4-7) and Chase Ellingson (5-6-11) tallied goals for Breck in that big third period and have powered the Mustangs’ offense much of the season. Ellingson leads the team in scoring, but it’s a balanced effort with 11 players scoring at least two points so far. Senior Stephen Headrick (5-3-0, 2.00, .908) has played every minute in goal, taking over for graduated Henry Johnson. Breck gets this week off before entering the Silver Division of the Schwan Cup just before the new year. The Mustangs are matched up with Mounds View in the quarterfinals.

This week: at Chisago Lakes (Tue)

Speaking of teams with a light mid-December schedule. St. Paul Academy had just one game in a 17-day span, a 4-1 victory over Owatonna last Saturday. The Spartans’ terrific crew of underclassmen have powered the team into the top-10 rankings, as sophomores Matt Dahlseide (5-13-18) and Jack Johnston (9-2-11), freshman Dev McCabe (2-9-11), and junior Justin Jallen (4-3-7) are the leaders of a team with few seniors. That light slate of games will pick up again after the holidays, with a visit to Duluth for the Heritage Classic. A pair of matchups against both Blake and Breck are yet on the schedule, as well, so the Spartans could really make hay soon.

Duluth Denfeld showed off its muscle since losing to Hermantown on Dec. 11, winning three straight games by a combined 20-3 score (6-1 over St. Francis, 6-1 over Superior and 8-1 over International Falls). That’s enough to give the Hunters a boost in the rankings and make for what looks like a great three-team race in Section 7A with No. 1 Duluth Marshall and No. 2 Hermantown. Dylan Michaud (4-12-16), who a year ago transferred from Cloquet-Esko-Carlton, leads the Hunters in scoring, but it’s a bit surprising who paces them in goals. Hulking defenseman Nick Thompson (8-7-15), known for his big frame and long reach, is the top goal scorer through nine games.

This week: vs. Totino-Grace (Tue)

The Cardinals continued their blitzkrieg through southwestern Minnesota last week and added in a big victory over Providence Academy for good measure. The combined 39-3 score in three games bumped up Luverne’s per game scoring average to an amazing 9.4 goals. Most observers know about junior Chaz Smedsrud (18-29-47) and freshman Jaxon Nelson (18-21-39), two of the top scorers in the entire state. But another freshman has started to regularly light up the scoreboard, Kasyn Kruse (12-11-23) who is third on the team in goals and fourth in points. A big rematch with Totino-Grace looms on Tuesday night. The Eagles beat Luverne in double overtime in last year’s Class 1A state consolation final.

Alexandria is the only new team to the rankings this week, as the Cardinals remained unbeaten while New Prague dropped a pair of games — and consequently, out of the rankings. Alexandria had a big rivalry week, knocking off Central Lakes Conference foes Brainerd and Sartell-St. Stephen and then upending Section 6A favorite St. Cloud Cathedral, 3-2. Senior Ryan Marciniak (8-9-17) tallied two goals against the Crusaders and leads the team in scoring, just ahead of Zach Johnson (4-9-13), Alec Wosepka (8-3-11) and Parker Revering (4-6-10). Alexandria has been stout defensively thus far, allowing just 1.75 goals per game.