Top three hold serve as the deck is shuffled below 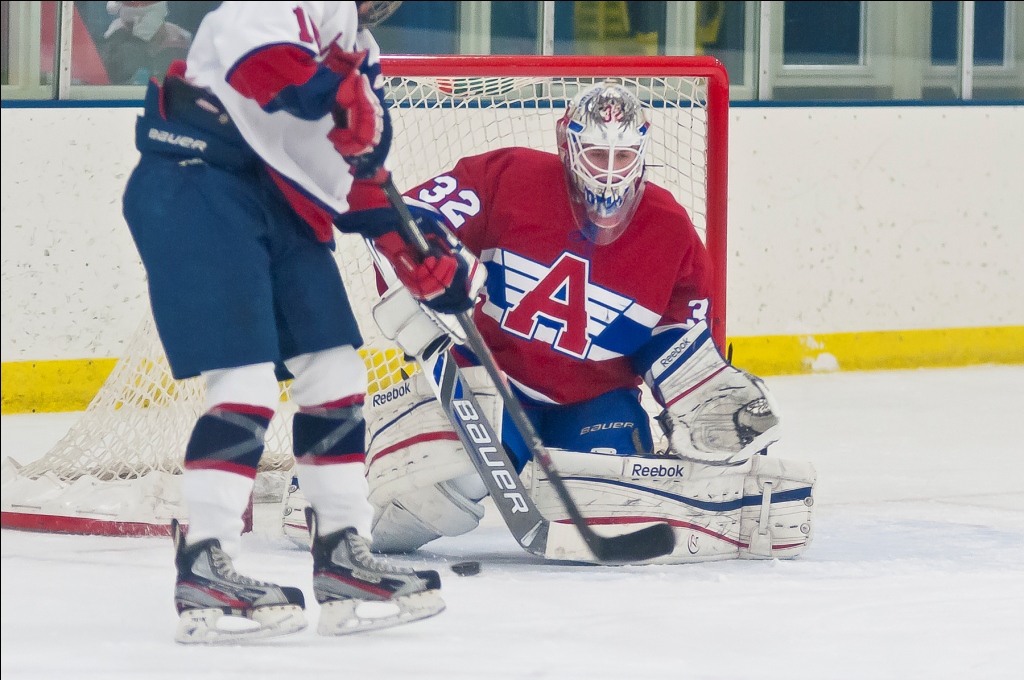 St. Cloud Apollo goaltender Nick Althaus and the Eagles jump into the top 10 this week off an impressive 12-1 run. (MHM Photo / Tim Kolehmainen)

Top three hold serve as the deck is shuffled below

As we enter the end of January, there is a distinct top tier in the Minnesota Hockey Magazine Class 1A Top 10 rankings, with No. 1 Hermantown leading a group that includes defending state champion East Grand Forks and a surging Mahtomedi program.

But behind the “big three” confusion reigns.

Previously unbeaten Alexandria had been making major strides up the rankings, but lost back-to-back games to end the week, while Duluth Marshall struggled to score goals in a trip to the northwest corner of the state. Just behind that pair, however, Breck has come on strong along with Duluth Denfeld and Delano. But was it enough to jump past teams they’d lost to earlier this season?

This week: vs. Virginia/MIB (Tue), at Cloquet-Esko-Carlton (Thu), at Rogers (Sat)

The Hawks continue to power through their schedule, winning 14 straight games since a 2-1 overtime loss to Hopkins. Hermantown is unbeaten against Class 1A teams, with only a pair of one-goal losses to Hopkins and Wayzata marring what otherwise would be a perfect season. Since the Royals’ loss, no team has come within a goal of the Hawks, and that includes Class 2A powers White Bear Lake, Bemidji and Grand Rapids and a bevy of ranked Class 1A teams such as Duluth Marshall, East Grand Forks and Duluth Denfeld. Yes, coach Bruce Plante’s team is that good this year — and deep. Ryan Kero (18-28-46) and Nate Pionk (22-19-41) lead 11 players with at least 10 points and 17 Hawks have tallied at least a goal already this year.

This week: at Crookston (Tue), vs. Kittson Central (Thu), at Warroad (Sat)

In the last two weeks, East Grand Forks has avenged two of its losses this year, beating Bemidji 4-1 on Jan. 15 and then taking down Grand Forks Red River by the same score last Thursday. Oddly, the Green Wave have played to three straight 4-1 victories. The only defeat left to avenge? A loss to Hermantown on New Year’s Eve in the finals of the Hilltopper Holiday Tournament in Duluth. That could come in the state championship game in early March, as the two seem on a collision course again. The East Siders have allowed just six goals in six games since that loss to Hermantown, all without regular goaltender Josh Weber (9-2-0, 1.79, .904), who is out with an injury. Garrett Lieberg (6-1-0, 1.61, .928) has been backstopping the Green Wave through their run.

This week: vs. Stillwater (Tue), at Hastings (Sat)

Mahtomedi scored the most impressive victory of the week among the top-10 Class 1A teams, shutting out Hill-Murray on Saturday night at home, 4-0. Timothy Kuivinen (11-9-20) scored twice and Mike Kneale (7-8-15) had a goal and an assist, while goaltender Will Swanson (17-2-1, 2.24, .913) came up big with 29 saves as the Zephyrs were actually outshot 29-14. Speaking of avenging teams, the win also balanced a 5-1 loss to the Pioneers back on Dec. 13 — one of just two losses all winter for Mahtomedi. In just over a week, Mahtomedi gets a chance to avenge its other defeat, to St. Thomas Academy. If any team can match the scoring depth of Hermantown, it could be the Zephyrs. Kuivinen and Kneale are two of 10 players with at least 15 points, led by Jack Becker (15-21-36) and Jack Heinsch (15-14-29).

This week: vs. Rogers (Tue), at St. Michael-Albertville (Thu)

This is where the rankings get messy. The Breck apologists might correctly point that no one outside the top three is as hot as the Mustangs right now, who have won six straight games by a combined 36-4 score, including four shutouts. On the season, Breck has allowed just 1.38 goals per game, with goaltender Stephen Headrick (15-6-0, 1.33, .927) playing every minute. Of Breck’s six losses, two came by a single goal against Class 2A opponents (Moorhead and Centennial), two came to teams currently ranked ahead of it (Mahtomedi and East Grand Forks), and one came to a team the Mustangs beat last week (St. Paul Academy). Only one un-avenged loss has been against a lower-ranked team, and that was way back on Nov. 29 against the team one spot lower in these rankings (Duluth Marshall). That’s enough to leap the Mustangs up into the No. 4 spot.

This week: at Cloquet-Esko-Carlton (Tue), vs. Duluth Denfeld (Thu), at Eveleth-Gilbert (Sat)

With all the hubbub around Duluth Marshall in the rankings, the Hilltoppers managed to stay at No. 5 despite splitting in their northwestern Minnesota road swing last weekend. The ‘Toppers ground through two tight defensive battles, losing 1-0 at Warroad on Friday night and winning 2-1 at Thief River Falls on Saturday. Jordan Fralich (4-13-17) broke a long scoreless string for the team with a third-period goal at TRF and Peter Lenz (6-5-11) won it with just under five minutes remaining. That win puts coach Brendan Flaherty’s team at 3-3-2 since opening the season on a 10-game winning streak, although the schedule has been tough. Scoring has been an issue, as Marshall has topped two goals just three times in those eight games, and two of those were wins against Superior (WI). A big game in the Section 7A race is coming this Thursday as the ‘Toppers host No. 6 Duluth Denfeld.

Yes, this really is three Duluth-area and Section 7A teams in the top-six in Class 1A. It should be a terrific race for the section title among these teams and a rising Hibbing/Chisholm program. But first, the seeding order must be sorted out, which makes this Thursday’s game at Duluth Marshall a big one for the Hunters. Coach Kevin Smalley’s team has won six straight since falling to Duluth East on Jan. 5, outscoring those opponents 28-9. A tough schedule looms, however, as none of the Hunters final five opponents have a losing record. Unlike Duluth Marshall, Denfeld emerged from the northwest unscathed, beating both Thief River Falls and Warroad. Cameron McClure (11-15-26) had two goals and an assist against Warroad, while Nick Thompson (11-21-32) and Cody Budisalovich (11-9-20) had a goal and an assist against the Prowlers.

This week: at Hutchinson (Tue), vs. Holy Family (Thu)

In the last five games, Delano/Rockford has beaten three teams who qualified for last year’s Class 1A state tournament (New Prague, Orono, and St. Cloud Cathedral) by a combined 16-4 score. That’s impressive, and along with an eight-game winning streak and only two losses to Minnesota-based teams (to No. 5 Breck and No. 2 East Grand Forks), the Tigers deserve this spot in the rankings — and maybe more. Delano has scored fewer than three goals in a game just twice all year, although last week’s 10-spot against Mound-Westonka is its high. Sophomore Ben Meyers (14-24-38) continues to lead the team in scoring, just ahead of Daniel Keranen (14-17-31). The Tigers play two of the other toughest Wright County teams this week (Hutchinson and Holy Family) in an attempt to stay unbeaten in the conference.

Back-to-back losses send Alexandria tumbling down the rankings a bit, although honestly any team from No. 4 Breck to the others receiving votes can lay claim to just about any position in that stretch, that’s how jumbled the rankings are past No. 3. Falling to Bemidji isn’t a bad loss for the Cardinals, but a home defeat to unranked Fergus Falls is what hurt last week, although the Otters are having a very good season and lost just 4-3 to Alexandria in their first meeting back on Dec. 9. Three times the Cardinals rallied from a one-goal deficit against Fergus Falls, but could not gain the lead. Micah Christenson (2-0-2), Zach Johnson (9-11-20), and Chris Leary (4-2-6) netted goals for Alexandria, which has a chance to get on a roll before the section playoffs, as only two of its remaining seven opponents has a winning record.

The Spartans have just three losses, but all are to teams currently ranked above them (Mahtomedi, Duluth Denfeld, and last Thursday to Breck). Otherwise, their most notable victories are against Luverne back on Dec. 6 and in early January at Breck. Still, it’s tough to argue results, and the young St. Paul Academy team has otherwise gotten those. Until last Thursday’s loss to Breck, the Spartans has allowed no more than one goal in seven straight games. It’s tough not to keep hammering home the point of how young the Spartans are. Four players have at least 27 points and all are underclassmen: sophomore Matt Dahlseide (14-23-37), freshman Dev McCabe (9-22-31), junior Justin Jallen (13-15-28), and sophomore Jack Johnston (15-12-27).

Despite losing to Alexandria last week, St. Cloud Apollo makes its first appearance in the top-10 rankings. That’s the only loss in the last 13 games for the Eagles (12-1-0), erasing the memories of a 1-2-2 start. In those 13 games, Apollo hasn’t allowed more than two goals (including the loss) and is averaging an outstanding 0.85 goals against. That’s top-10 caliber defense. Veteran goaltender Nick Althaus (12-3-2, 1.41, .922) has anchored the run and now this week gets a chance to avenge the loss that immediately preceded the streak (Fergus Falls).