Sartell-St. Stephen debuts, Mahtomedi among few on the move 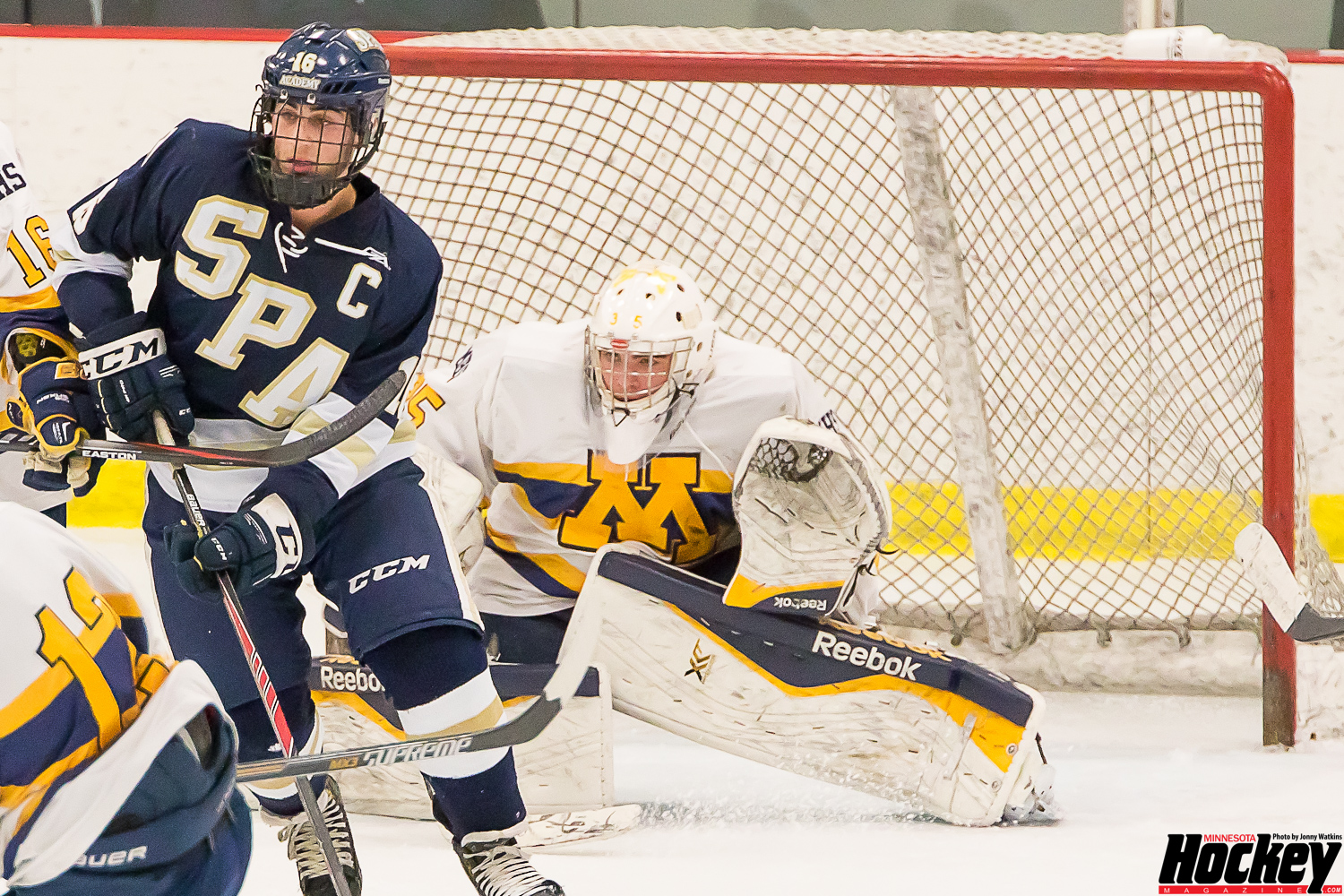 Sartell-St. Stephen debuts, Mahtomedi among few on the move

Need any more proof of the depth of Section 6A Minnesota boys’ high school hockey this winter? This week, Sartell-St. Stephen became the third different team from the St. Cloud-area based section to crack the top-10 rankings (along with St. Cloud Cathedral and St. Cloud Apollo). Add in votes received in earlier polls from Fergus Falls, St. Cloud Tech, and Alexandria and it’s clear this section will be a battle come February.

Other than the Sabres’ jump into the 10-spot, there was only slight shuffling of the teams in the rest of the spots. Hermantown and Breck continued to roll on, and although the Hawks were tied by Hopkins last Saturday, managed to hold onto the top spot. Mahtomedi climbed into the No. 3 ranking courtesy of its victory at No. 4 St. Paul Academy, while East Grand Forks lost big twice, but to teams ranked above it.

The Hawks ended their four-game opening run against Class 2A opponents with an unbeaten record, although Hopkins did escape with a 3-3 tie last Saturday. Hermantown blistered Royals’ goaltender Connor Quinn with 56 shots, but the senior stopped 53 in just his second career start. The Hawks trailed 3-1 in the game, but third-period goals by Ryan Sandelin (6-2-8) and Jesse Jacques (1-4-5) gave Hermantown the tie. Despite beginning its Class 1A slate of games, the schedule isn’t much easier with local rival Duluth Denfeld and top-10 Thief River Falls visiting in the next week.

In a busy week, Breck staked its claim to the top spot in the rankings with an impressive four-win result. The Mustangs’ offense came alive, scoring 23 goals against four difficult opponents, two who are ranked right behind Breck in the Class 1A poll — a surprising 9-1 rout of the two-time defending state champion East Grand Forks and a 4-1 victory over Thief River Falls. Junior Mitch Machlitt (5-5-10) has been consistent, scoring one goal in each of the Mustangs’ victories and is third on the team in scoring behind Chase Ellingson (8-8-16) and Will Blake (4-9-13).

After playing three low scoring games to open the season, the floodgates opened in a wild 7-6 victory over Spring Lake Park last Thursday. Mahtomedi has found a way to win, though, as all three victories are by a single goal. Senior goaltender Will Swanson (2-1-0, 2.00, .933) didn’t play in the Spring Lake Park game, but has only allowed six goals in his three starts. The Zephyrs’ key 3-2 victory at St. Paul Academy last week vaulted them above the Spartans in this week’s rankings. Luke Posner (2-1-3) scored twice in the game, including the game-winner midway through the third period.

Last Tuesday’s loss to Mahtomedi dealt the Spartans a blow in the Section 4A seeding, but they didn’t let it linger. In two subsequent games, St. Paul Academy scored seven goals in each, including a 7-3 destruction of two-time defending state champion East Grand Forks on Saturday. Jack Johnston (6-6-12) netted a hat trick against the Green Wave and leads the team in scoring over Matt Dahlseide (5-5-10) and Justin Jallen (6-4-10). Sophomore goaltender Andy Beran made 27 saves, as the Spartans were actually outshot, 30-23. Another big game looms ahead, as St. Paul Academy hosts No. 2 Breck on Saturday at the Blake School Arena in Hopkins.

Sure, the Green Wave lost big twice last week, which would seem to signal a big drop in the rankings. But a closer examination reveals that both losses were on the road to teams ranked ahead of EGF at the time (Breck and St. Paul Academy). The margins of both games — a combined 16-4 — is alarming, but there were expected hiccups as new coach Scott Koberinski broke new players into the lineup. Goaltending seems unsettled yet, but the Green Wave responded with a 7-1 victory at Crookston to close out the week, with Jarod Reak (5-2-0, 3.46, .835) stopping 18 of 19 shots and Coby Strauss (4-1-5) scoring a hat trick. This week is bookended by tough games against undefeated Hibbing/Chisholm and Bemidji, which could reveal more about the East siders.

Cathedral’s only loss this year was a one-goal defeat at East Grand Forks, which keeps it behind the Green Wave in this week’s rankings. That loss was the only game in which the Crusaders allowed more than three goals — and the only game in which they didn’t score at least four. Last week saw the Crusaders’ offensive balance emerge, as the 10 goals scored were by eight different players. Tanner Schmit (3-2-5) scored twice in a 5-2 victory at St. Cloud Tech and River Lakes transfer Connor Beltz (3-5-8) tallied twice in a 5-1 win over Rochester Lourdes. Thirteen different players have already scored at least one goal for Cathedral this winter. A big Section 6A game is ahead as crosstown rival St. Cloud Apollo visits on Saturday. The winner gets a leg up on the early section seeding.

Apollo has played fewer games than any of the other top teams in Class 1A, including a 10-day break between a season-opening loss at Bemidji, and last week’s two games. The Eagles doubled up both Willmar (6-3) and Alexandria (4-2), with senior defenseman Tanner Breidenbach (4-1-5) scoring two goals in each game. It’s no surprise he leads the team in scoring along with forward Gino Lucia (1-4-5), the leading returning point-getter from last year. The Eagles are a defensive-led team, anchored by four-year starter Nick Althaus (2-1-0, 2.33, .907) in goal. Last week’s victories against Section 6A opponents began an important five-game stretch against possible playoff opponents, which should give an early read on the seeding. This week, Apollo “travels” to Sartell-St. Stephen and St. Cloud Cathedral, both of whom are ranked in this week’s top 10.

The Bluejackets kept on buzzing last week with a road trip that featured big victories at International Falls and Roseau. Through four games, Hibbing/Chisholm has scored at least six goals in each and even allowing three goals at Roseau, has given up just five goals total. That dominant run will be tested this weekend by another road trip even further west, as the Bluejackets visit East Grand Forks and Crookston. Hibbing shares the puck well, as two of the top-10 players in the entire state in assists wear the blue and white — junior defenseman Scott Perunovich (3-11-14) and senior forward Jake Bestul (2-9-11). Freshman Ryan Ullan (4-0-0, 1.25, .946) has made a big impact in goal in his first varsity season, as well.

Senior Ethan Johnson (10-3-13) looks like a man on a mission early this year, as he’s one of the top goal-scorers in the state through three weeks and has scored in every one of the Prowlers’ six games. He’ll need help, though, as the rest of the team has combined for just nine goals. After starting the season with four straight wins, the Prowlers hit a rough patch to end last week, falling 4-1 at Breck on Saturday and 7-3 at home to Bemidji on Tuesday night. Neither loss is a bad one, as both teams are ranked highly in the polls — Breck at No. 2 in Class 1A and Bemidji at No. 7 in Class 2A. It doesn’t get any easier for TRF this week, as road games at No. 1 Hermantown and against an angry Warroad team loom.

Sartell-St. Stephen cracks into the top-10 rankings for the first time this winter, as the Sabres have won five of their first six games. Oddly, one of those losses came this week, a 5-2 defeat at Brainerd. But the Warriors are an unbeaten Class 2A team that has been scoring goals in bunches. Sartell’s other five games — all victories — have come against Class 1A teams by a combined 25-9 score. The Sabres’ next big test is Friday at home against St. Cloud Apollo, a team ranked ahead of them and a Section 6A rival. Keenan Lund (7-6-13) leads the Sabres in scoring, just ahead of crafty junior defenseman Spencer Meier (2-7-9).