Top spots sort themselves out in Duluth 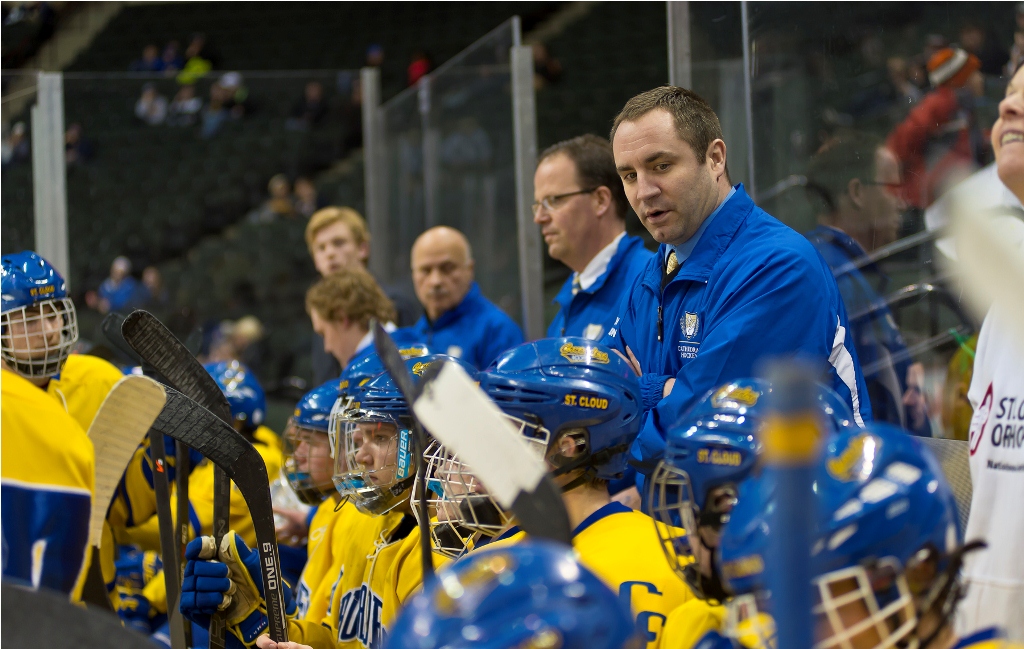 Top spots sort themselves out in Duluth

For once, the Minnesota Hockey Magazine Class 1A Top 10 rankings are a relatively easy call. Not because we’ve gotten any smarter over the past two weeks, but because the top teams all decided to play each other at the Hilltopper Holiday Classic in Duluth. It was a boffo bit of scheduling for Duluth Marshall coach Brendan Flaherty to pull off and it really gave Class 1A fans something to track.

Each of the top three teams in the pre-holiday rankings were in the tournament, along with very good clubs from Delano and Mankato West, and a handful of top Wisconsin teams.

When all was sorted out on the ice, Hermantown leapt into the top spot in this week’s rankings by beating both No. 2 Duluth Marshall and No. 3 East Grand Forks by a combined 9-2 score.

Coach Bruce Plante’s club proved its top ranking on the ice over the holidays, beating both of the teams ranked below it (No. 2 Duluth Marshall and No. 3 East Grand Forks) to earn the title at the Hilltopper Holiday Classic. And it was in resounding fashion, which has the Hawks primed for another run to the state championship game. Hermantown has been scoring goals in bunches with Ryan Kero (11-15-26) and Nate Pionk (12-11-23) leading the way. But they’ve been equally outstanding on defense, not allowing more than two goals in any game since November. Luke Olson (9-1-0, 1.55, .927) hasn’t seen many shots (just 20.5 per game), but has stopped most of them, solidifying the goaltending position, a question mark entering the winter.

This week: vs. Mahtomedi (Tue), vs. Superior (Thu)

The Hilltoppers ran into a buzzsaw in Hermantown in the semifinals of the holiday tournament, but recovered nicely in a 4-1 victory over Superior (WI) in the third-place game. Marshall continues to be a balanced team without any true superstars, unless you count top defenseman Jordan Fralich (3-11-14) or veteran goaltender Alex Murray (8-1-0, 1.97, .918). Scoring depth is a key for Flaherty’s team, as 10 players have at least seven points, led by Derek Farrell (7-11-18) and John McKenna (10-7-17). The Hilltoppers have a big week coming up, with a Tuesday night showdown against No. 4-ranked Mahtomedi looming.

The Green Wave advanced to the title game at the Hilltopper Holiday Classic to set up a state final rematch with Hermantown. But this time, the Hawks’ defense stymied EGF in a 3-0 victory. East Grand Forks did manage 23 shots against Hermantown, but couldn’t dent the twine. It’s a quality loss for the Green Wave, which keeps them from dropping in the rankings — as does a follow-up 2-1 victory over Blaine last Friday in which Jace Pesch (8-7-15) and Austin Monda (4-2-6) erased an early Bengals’ lead. The Green Wave began a six-game home stand with the victory over Blaine and should be able to rack up victories. After a shot start, leading scorer Dixon Bowen (13-15-28) didn’t record a point in the last two games.

Mahtomedi continued to take care of business over the holidays by winning three close, true road games on the Iron Range in the Perpich North-South Challenge. That’s now 11 wins in 12 games for the Zephyrs, but they’ll be severely tested with a six-game road trip that starts with games at No. 2 Duluth Marshall and unbeaten St. Thomas Academy. It’ll be a true test of Mahtomedi’s depth, which coach Jeff Poeschl has attributed to the team’s hot start. No fewer than a dozen players have at least five points and none more than the 19 put up by both Jack Becker (11-8-19) and Sam Krawczyk (7-12-19). Can that depth stand up to two of the top teams in the state?

Breck fell in the finals of the Schwan Cup Silver Division to Centennial, 1-0, but climbed a spot in the Class 1A rankings. That loss was the Mustangs’ only defeat in the past six games, a stretch in which they’ve allowed as many goals as they’ve had shutouts (three each). That defensive stinginess is something Breck can build on, particularly in a big week with No. 10 St. Paul Academy and a perennially strong Moorhead team coming to Anderson Ice Arena. Goaltender Stephen Headrick (8-4-0, 1.50, .924) has seen his numbers improve during the six-game run and has backboned the Mustangs’ defense. Leading scorer Tyler Scott (10-7-17) burst out with four goals in the win at Providence Academy.

This week: vs. Moorhead (Tue), at Willmar (Thu)

No team is climbing the rankings faster than Alexandria, which just two weeks ago was unranked. But as only one of two unbeaten teams left in Class 1A (along with 12-0-0 St. Paul Como Park), the Cardinals are no longer flying under the radar. They put together an impressive trip to Thief River Falls for the Ralph Engelstad Classic, sweeping three good northwestern Minnesota programs. Picking up a home win over Moorhead this Tuesday would go a long way to proving Alexandria truly does belong among the elite this winter. Alexandria is allowing just 1.73 goals per game, anchored by goaltender Christian Reimers (8-0-1, 1.95, .915) and a strong defense led by seniors Parker Revering (5-8-13) and Christian Canavati (3-9-12).

This week: at Prairie Centre (Tue), vs. Hermantown (Fri)

Welcome back, St. Cloud Cathedral. The Crusaders are back in the rankings for the first time since opening the season with a three-game losing streak. Since then, they’ve gone 9-1-0 in 10 games with only a 3-2 defeat to unbeaten Alexandria on Dec. 20. In winning five straight games, the Crusaders defense has turned it up a notch, allowing exactly one goal in each of those games. The latest, a 2-1 victory over Warroad, propels the Crusaders past the Warriors and into the No. 7 spot this week. Low-scoring games have been the norm for Cathedral, as Logan Neu (11-9-20) is the only player with more than six goals. But as they say, if you can’t score against ‘em, you won’t beat ‘em. A big game for the Crusaders looms on Friday, as top-ranked Hermantown comes to the MAC.

Who is this Warroad team? The Warriors appear a mirror opposite of last winter, when they scored goals in bunches. Now, they and their opponents have combined for fewer than five per game (2.47 for the Warriors, 2.2 against) and has score more than four just once all year (last week’s 5-5 tie with Grafton/Park River (ND). Coach Jay Hardwick has had to adjust to life without his entire top line from last year, as the only remaining piece (Kobe Roth) has been out with injury for the past six games. Without that offensive punch, the Warriors have remained relevant with tight defense in front of veteran goaltender Alex Burke (9-5-1, 2.15, .920). Defensemen Luke Jaycox (2-7-9) and Jade Cole (1-5-6) are great in all three zones. The biannual Warroad vs. Roseau game is coming this Thursday as a big test.

This week: at Proctor (Thu)

The rankings start to get a bit squishy at this point, as the Hunters hang in the top 10 despite losing their last two games. But neither was a bad loss, as Bemidji looks like the favorite in Section 8AA and a one-goal defeat to crosstown rival Duluth East is also a solid result. The loss to Bemidji was in the title game of the Hunters’ own Duluth Heritage Classic holiday tournament, a 4-2 game in which Cam McClure (6-10-16) and Jake DeCaro (8-4-12) scored for the Hunters and Westley Cook (5-3-0, 2.76, .877) made 19 saves. Cook has been splitting time with junior River Alander (4-2-0, 1.90, .930) in goal, while senior defenseman Nick Thompson (9-13-22) continues to lead Denfeld in goals and points.

This week: at Breck (Tue)

St. Paul Academy lost to host Duluth Denfeld at the Duluth Heritage Classic over the holidays, but rebounded to beat Owatonna in the third-place game to retain a top 10 ranking. The Spartans have lost to the only two ranked teams on their schedule (3-1 at Mahtomedi on Dec. 4 and to Denfeld), although they also have a 5-2 defeat of Luverne that keeps them ranked above the Cardinals. SPA is an extremely young team, as only one of the team’s 56 goals on the season has been scored by a senior. The four players with 20 points or more — Matt Dahlseide (10-17-27), Dev McCabe (6-17-23), Justin Jallen (9-13-22), and Jack Johnston (13-7-20) — are a sophomore, freshman, junior, and sophomore, respectively. They’ll be tested by a big Independent Metro Athletic Conference game at Breck Tuesday night.