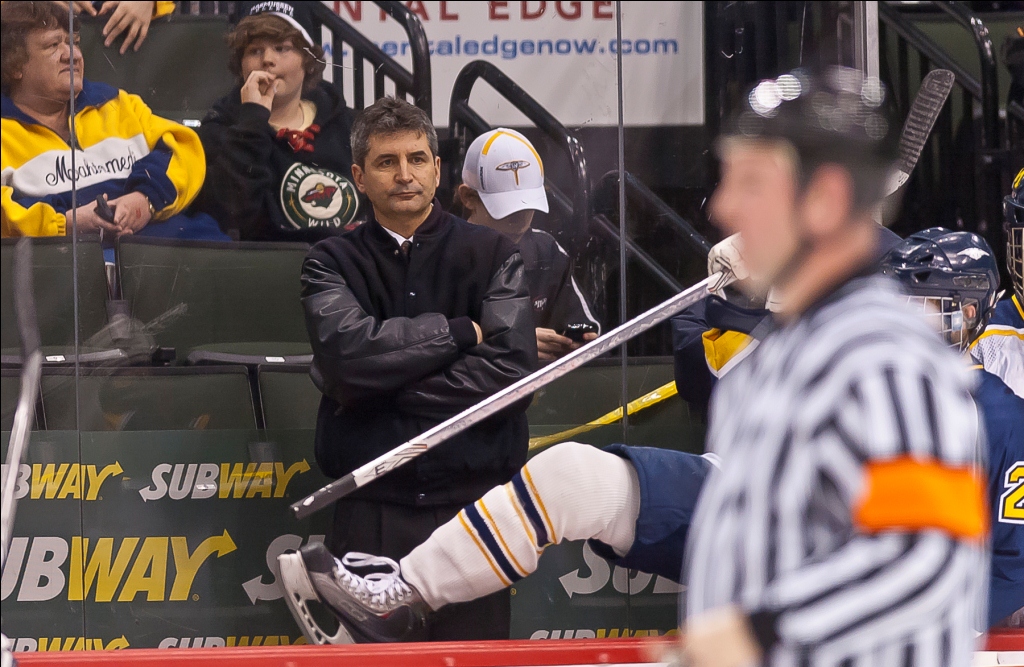 Mahtomedi coach Jeff Poeschl has the Zephyrs clicking on all cylinders as the postseason approaches. (MHM Photo / Tim Kolehmainen)

In wrapping up its regular season with a victory over Blake Tuesday night, Mahtomedi climbed into the No. 2 spot in the penultimate Minnesota Hockey Magazine Class 1A Top 10 rankings — and are right on the heels of top-ranked Hermantown, which has resided in the No. 1 spot much of the last two months.

Mahtomedi hasn’t lost since Jan. 8 at St. Thomas Academy, a result the Zephyrs avenged a week ago. In the last two weeks, they’ve also reversed their other loss of the season, beating Hill-Murray to climb to the top of the Metro East Conference standings. Since that loss to STA, the Zephyrs are 10-0-1 and have beaten two of the top Class 2A teams in the state.

With back-to-back shutouts in which it scored a combined 13 goals, Hermantown doesn’t appear to be slowing down as the playoffs approach. The Hawks ran their unbeaten streak to 19 games (18-0-1) and have been rarely challenged in that stretch, with a 3-3 tie at Cloquet-Esko-Carlton on Jan. 29 the only game in which they haven’t won by at least two goals. Junior goaltender Luke Olson (18-1-1, 1.51, .932) hasn’t allowed a goal since the third period Jan. 31 at Rogers, a scoreless stretch of 107 minutes, 16 seconds. Junior Cole Koepke (17-18-35) has also been hot lately, with 10 goals in his last nine games. The five-time Class 1A state runners-up look like they’re ready to get back to the final again this March.

Mahtomedi climbed a spot in the rankings this week, finishing off its regular season on an 11-game unbeaten streak (10-0-1) that included victories over Class 2A top-10 powers St. Thomas Academy and Hill-Murray. Along with Hermantown, the Zephyrs are the hottest team in Class 1A and a true threat to win a state title. Mahtomedi could even have a claim to the top spot, as it can be argued that its two losses are to tougher teams than Hermantown’s this season. In the 5-3 victory over the Cadets last Tuesday, Jack Becker (22-26-48) and Joe Forciea (11-19-30) each scored two first-period goals as the Zephyrs shocked STA with a 4-1 lead after one period.

East Grand Forks also closed out its regular season with a tight 2-1 victory at Thief River Falls on Tuesday, setting the Green Wave up as the top seed in the upcoming Section 8A playoffs. Trailing late in the second period, Bauer Brown’s first goal of the season tied the score, and Reed Corbid (10-16-26) scored in the third for the Green Wave victory, while Josh Weber (13-3-0, 1.49, .921) stopped 16 of 17 shots. But it was a 3-1 loss at Moorhead last week that knocked the Green Wave down a peg in the rankings. Leading scorer Dixon Bowen (21-29-50), a finalist for the Mr. Hockey award, was hurt in the first period and missed the rest of the game. His absence clearly hurt the East Siders and his health for the playoffs is key.

What will we see from Breck in the final week? The Mustangs have been off since winning 4-2 at St. Michael-Albertville 12 days ago — a long stretch of inactivity for any team this time of the year. Coach Les Larson certainly has had time in practice to fine tune his team entering the Section 2A playoffs. But first, the Mustangs must visit Class 2A power St. Thomas Academy and close out the regular season with a home game against section rival Blake, which has been coming on after a tough start. Breck shut out Blake the first time they met, 2-0 on Jan. 20. It’s a common result for the Mustangs, who have allowed two or fewer goals in each of their last eight games, winning all eight.

This week: at Sauk Rapids-Rice (Thu)

Alexandria surpassed the 20-win plateau last week with three resounding victories, climbing a spot in the rankings in the process. Since dropping back-to-back games to Fergus Falls and Bemidji in late January, the Cardinals have responded with six straight wins by a combined 30-7 score. Only one regular season game remains for the likely top seed in the Section 6A playoffs, but it’s against a Sauk Rapids-Rice team that gave the Cardinals trouble in the first meeting, losing 2-1 on Jan. 13 in Alexandria. The Storm actually led 1-0 in the second period before Eli Heckert (2-6-8) and Parker Revering (6-14-20) scored in the second to give Alexandria the come-from-behind win.

With back-to-back victories over programs that advanced to the Class 1A state tournament last year (New Prague and Orono), it appears as if coach Gerrit van Bergen’s team is ready for the Section 2A playoffs. The Tigers will be the likely No. 2 seed behind No. 4A Breck, but like the cliché goes, are “dangerous when cornered.” Karl Peterson (13-13-26) and Gabe Halonen (12-4-16) had two goals each in the two most recent victories and are two of seven Tigers who have scored in double-digit goals this winter, led by sophomore Ben Meyers (18-29-47). The Tigers are balanced and deep.

This week: vs. Greenway (Thu), at St. Cloud Cathedral (Sat)

A 4-1 loss at Holy Family Catholic last Saturday sends the Hilltoppers tumbling a few spots in the rankings, but it wasn’t an unexpected defeat against a quality Class 2A team. It’s part of a trend now, though, as Duluth Marshall has gone 6-5-2 since winning its first 10 games of the season. The Hilltoppers have two regular season games remaining to regain momentum, including a good test at St. Cloud Cathedral on Valentine’s Day. Marshall should receive the No. 2 seed in the Section 7A playoffs behind top-ranked Hermantown, largely because of its head-to-head 4-2 victory over No. 8A Duluth Denfeld on Jan. 29. That was a key win to stay ahead of the Hunters.

Duluth Denfeld has lost two of its last three games, but isn’t moving too far in the top-10 rankings as they were to No. 7A Duluth Marshall (4-2 on Jan. 29) and most recently, a 5-4 loss at Grand Rapids on Tuesday night. The Hunters actually led the Thunderhawks 3-2 in the second period, but had trouble slowing down Grand Rapids’ top line, which accounted for three goals and four assists. Dylan Michaud (9-19-28) scored twice for Denfeld, while junior goaltender River Alander (8-3-0, 1.56, .937) stopped 32 of 37 shots as the Hunters were outshot 37-20. The loss to Marshall likely left Denfeld as the No. 3 seed in the very tough Section 7A playoffs, behind the Hilltoppers and top-ranked Hermantown.

This week: at Holy Angels (Thu)

A loss to Blake last week was the first time this season that St. Paul Academy has fallen to a lower-ranked team. The Spartans’ three previous losses were to No. 2A Mahtomedi, No. 4A Breck, and No. 8A Duluth Denfeld. Still, it wasn’t enough to knock the Spartans out of the top-10, but it does leave some doubt that the young team might not yet be ready for prime time playoff action in Section 4A. SPA will likely get the No. 2 seed, however, behind Mahtomedi and could see the Zephyrs in the section final. The Spartans took their frustration from the loss to Blake out on Richfield Saturday night, as Will Kelly (12-5-17) had a hat trick and Cullen McCabe (8-10-18) and Dev McCabe (15-31-46) each scored twice.

The roulette wheel that has been the No. 10 spot in the rankings settled on St. Cloud Apollo this week, after previous No. 10 Fergus Falls lost to Sartell-St. Stephen last week. Ah, but the Otters had beaten Apollo head-to-head just two weeks ago. Such is the nature of this spot, which has seemingly shifted between these two programs, Luverne, St. Cloud Cathedral and others all winter. Since losing to Fergus Falls, though, Apollo has won five straight games by a combined 22-5 score, continuing their domination in the defensive zone. The Eagles allow just 1.29 goals per game and have a 93.7 percent penalty kill, largely with Nick Althaus (16-4-2, 1.37, .920) in goal.