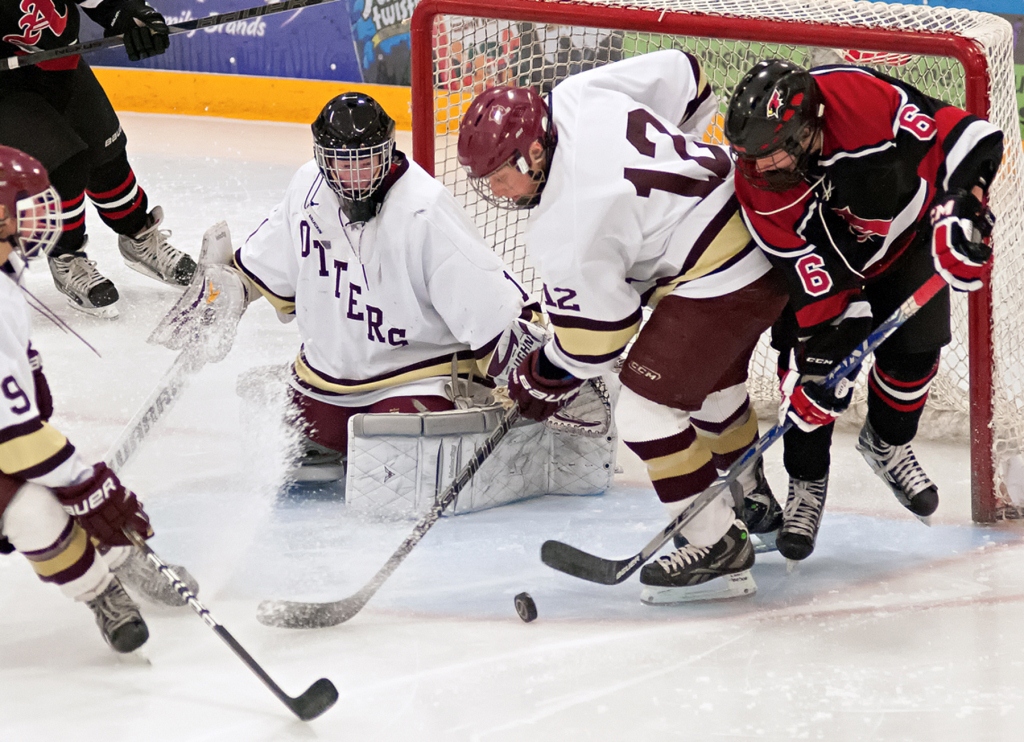 While Cloquet-Esko-Carlton tried its best to shake up the top the Minnesota Hockey Magazine Class 1A Top 10 rankings entering the first week of February, it was a fairly stable week for the poll.

The Lumberjacks took on a pair of top-five Class 1A neighbors and tied No. 1 Hermantown and beat No. 5 Duluth Marshall, but didn’t make either move. Perhaps it’s more a comment on the surging Lumberjacks than their opponents, who otherwise have been excellent much of the season. Hermantown retained its top spot, leading East Grand Forks and Mahtomedi, which also suffered a tie against Hastings last week.

There is one newcomer to the poll, as Fergus Falls makes its first appearance in the No. 10 spot after shutting out last week’s No. 10 team (St. Cloud Apollo).

This week: vs. Brainerd (Fri)

With a 3-3 tie at neighboring Cloquet-Esko-Carlton last week, the Hawks had their first hiccup since losing to Hopkins on Dec. 6. Still, Hermantown is on a 17-game unbeaten streak (16-0-1) with only one game being decided by fewer than two goals (obviously, the tie with the ‘Jacks). The Hawks responded well, though, ripping Rogers 8-2 behind two goals and two assists each from Nate Pionk (26-23-49) and Cole Koepke (16-17-33). Wyatt Aamodt (8-22-30) added four assists and goaltender Luke Olson (16-1-1, 1.68, .927) actually had two assists to add to his 19 saves. Just three games remain in the regular season, capped with a visit to Section 7A contender Hibbing/Chisholm. The Hawks should be set for the No. 1 seed, though, with two victories over No. 5 Duluth Marshall already in hand.

This week: at Moorhead (Tue), at Roseau (Fri)

East Grand Forks essentially wrapped up the top seed in the Section 8A playoffs with three wins over section rivals, including a 3-0 shutout of Warroad, sweeping the two-game season series from the Warriors. The only stumbling block remaining is a season finale at Thief River Falls, but the Green Wave won the first meeting 4-1 back on Jan. 20. Since losing to Hermantown in the final of the Hilltopper Holiday Tournament on Dec. 31, the East Siders have won nine straight games and allowed just 10 goals in that span. Top goaltender Josh Weber (11-2-0, 1.60, .917) returned last week, stopping 46 of 47 shots in the victories over Kittson Central and Warroad. It was his first game action since Jan. 2. North Dakota commit Dixon Bowen (21-29-50) had a big week with four goals and four assists in the three games.

The Zephyrs hit a stumbling block in its last game of the week, tying Hastings 4-4, a team they had defeated 7-1 just a week earlier. Let’s just call it an odd game, one in which the teams scored all eight goals in the second period. Hastings powered out to a 3-0 lead with goals in the first 2:50 of the period before Mahtomedi rallied, eventually tying it at 3-all and 4-all on a pair of goals from Joe Forciea (9-16-25). Otherwise, Mahtomedi has been rolling. The Zephyrs came into the week off a 4-0 shutout of Hill-Murray, a top-five Class 2A team, and started it with an 8-2 rout of Stillwater, which beat the Pioneers to reach the state tournament last winter. In that game, leading scorer Jack Becker (18-24-42) had a hat trick and Timothy Kuivinen (13-11-24) scored two goals and two assists.

This week: no games

After stretching its winning streak to eight games, Breck gets this week off before ending with a flurry against St. Thomas Academy and longtime rival Blake. The Mustangs appear to be riding momentum into the playoffs, as they have four shutouts in eight games and last week edged a pair of good Class 2A teams, Rogers and St. Michael-Albertville. Leading scorer Chase Ellingson (19-18-37), Will Blake (9-17-26), and Tyler Scott (16-12-28) each scored a pair of goals last week to lead the way, while Stephen Headrick (17-6-0, 1.34, .928) made 46 saves on 49 shots.

This week: vs. Virginia/MIB (Thu), at Holy Family Catholic (Sat)

In winning its final two games last week, Duluth Marshall remained in the No. 5 spot in this week’s rankings. But it should be noted that the Hilltoppers are 5-4-2 since opening the season with a 10-game winning streak. None of the four losses could be considered debilitating, though, with two against No. 1A Hermantown and close losses to Warroad and Cloquet-Esko-Carlton. Still, coach Brendan Flaherty would like to get his team rolling again before the tough Section 7A playoffs, which also includes the Hawks and No. 7A Duluth Denfeld. The ‘Toppers should get the No. 2 seed courtesy of last Thursday’s 4-2 victory over the Hunters. Leading scorer Derek Farrell (11-18-29) led the way with a goal and two assists, while goalie Alex Murray (11-4-1, 1.82, .926) made 25 saves.

This week: vs. Prairie Centre (Tue), at Sartell-St. Stephen (Fri)

With a three-win week, Alexandria jumped over a pair of teams that lost last week, settling back into the No. 6 spot in the rankings. The Cardinals recharged after dropping consecutive games the previous week — their only two losses on the season — beating three opponents by a combined 12-4 score. Only one of the Cardinals’ remaining four opponents has a winning record, but it’s another tough Section 6A team in Sartell-St. Stephen this Friday. Ryan Marciniak (12-13-25) and Alec Wosepka (17-8-25) continue to lead Alexandria in scoring, but nine players have double-digit points and the Cardinals’ defense is allowing just 1.76 goals per game.

Denfeld likely lost its chance at the No. 2 seed in the Section 7A playoffs with a 4-2 loss at No. 5A Duluth Marshall last Thursday night. Cody Budisalovich (17-10-27) and Jake DeCaro (13-12-25) scored for the Hunters, who were outshot 37-27, although they did hold a 10-5 edge in shots in the third period in an attempted rally. Senior defenseman Nick Thompson (11-27-38) assisted on both goals and continues to lead the Hunters in scoring. The schedule gets tougher in the final two weeks for Denfeld, as its remaining three opponents all have winning records, including a road trip to Class 2A Grand Rapids.

This week: vs. Providence Academy (Tue), vs. Blake (Wed), at Richfield (Sat)

St. Paul Academy recovered from its loss to Breck by winning three games last week, including a thrilling 3-2 overtime victory at St. Paul Johnson on Thursday. It was a back-and-forth game, with SPA taking a 2-0 lead in the second period on goals from Justin Jallen (16-15-31) and Tyler Seplak (5-6-11). Johnson rallied with two third-period goals before leading scorer Matt Dahlseide (17-25-42) ended it 2:01 into overtime. The Spartans likely won’t get the top seed in the Section 4A playoffs, not with No. 3A Mahtomedi leading the way, but will be a strong contender to upset the Zephyrs should they meet in the section final. And the Spartans are a young program with nowhere to go but up.

The Tigers routed Hutchinson last Tuesday to stretch their winning streak to nine games, but they fell back to earth in a 6-2 loss to Class 2A power Holy Family Catholic Thursday night. Still, Delano/Rockford should prove dangerous in the Section 2A playoffs, where they may be the No. 2 seed behind Breck. The Mustangs earned that spot with a 6-1 win over the Tigers way back on Nov. 25. Delano is a different team since then, however. Seven players have between nine and 16 goals, led by sophomore Ben Meyers (16-25-41) and senior Daniel Keranen (16-18-34). Meyers was in on both goals against the Fire, scoring the first and assisting on John Keranan (11-13-24) in the third period.

This week: at Sartell-St. Stephen (Tue), vs. Willmar (Thu)

The ever-changing No. 10 spot in the rankings goes to a newcomer this week, as Fergus Falls earns its way in on a five-game winning streak. During that span, the Otters have three shutouts, including a 2-0 blanking of previous No. 10 St. Cloud Apollo last Tuesday. Peter Johnson (15-19-34) and Zach Tarczon (26-16-42) scored 1:36 apart late in the second period to give goaltender Andrew MacFarlane (12-4-3, 2.51, .904) all the help he needed. The senior has made a habit of coming up big in big games, stopping all 37 shots against Apollo. Tarczon has been a welcome return, as the Fergus Falls native headed to Providence Academy for a year before coming back home.