Red Knights strengthen grip on top spot, Elks among those trending up 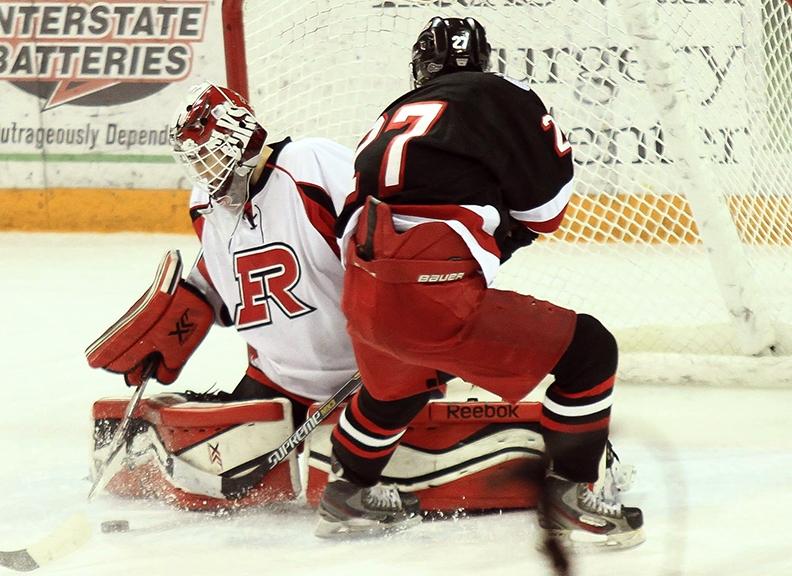 Elk River-Zimmerman goaltender Benny Myers and the Elks are moving up in this week’s CrankyApe.com Class 2A rankings. (Photo by Dave Harwig)

The top five stayed in the same spots this week with some minor shuffling among the 10th-6th ranked teams.  The biggest drop was experienced by Grand Rapids who fell from 6th to 9th this week after losing to Hermantown 5-0.  Elk River/Zimmerman moved up one spot from No. 7 to No. 6 and Minnetonka moved up from No. 8 to No. 7 this week.  Edina also moved up one slot from No. 9 to No. 8.

There are plenty of quality games this week featuring No. 2 Blaine against No. 6 Elk River, No. 3 Eden Prairie vs No. 7 Minnetonka and Wayzata, and No. 10 Bemidji facing Class 1A No. 1Hermantown.

The Red Knights have the week off before resuming play on Jan. 19 at Farmington.  Certainly, Schmitz-Maki Arena will be rocking with some of the best fans in the game.  The Red Knights’ Cade Gleekel has been outstanding in leading his team offensively (16g-22a-38pts) from the forward position with Nick Austin (7g-14a-21pts) creating offensive opportunities from the blue line and defending really well.  B-SM picked up an impressive win over St. Thomas Academy and back-to-back Metro West victories over Chanhassen and Bloomington Jefferson last week.

The Bengals have won 5 straight games including wins over Eden Prairie (5-2), White Bear Lake (5-0), Duluth East (5-2), Andover (5-1), and Maple Grove (6-2).  Luke Notermann (17g-28a-45pts) and Riley Tufte (25g-19a-44pts) have pulled away from the field in scoring with defenseman Tanner Vescio (0g-17a-17pts) leading the defensemen in points and placing third on the team.  Their game with Centennial this week always brings a great game and will be a challenge and they follow that up with Elk River which will be a great challenge.

The Eagles won back-to-back games before shellacking Cloquet-Esko-Carlton and then defeating Duluth East in a game that had a big hit and subsequent scare to Duluth East’s Nathaniel Benson.  It factored into the outcome of the game as the building took on a cerebral distracted feel as the full house at the EP Community Center had the Hounds defenseman and all of the players in their thoughts and prayers.  Reports are positive from the team that Benson will be able to get back on the ice and when it initially appeared as though it may be much worse.  Eden Prairie continues to pile up the wins and have lost their only games to the two teams ahead of them in the rankings. The Lake Conference schedule begins this week and two high end opponents await the Bengals in Wayzata and Minnetonka.

There are plenty of quality wins on the Fire ledger this year including resume victories over Lakeville North, Stillwater, St. Thomas Academy, Wayzata, Minnetonka, and Prior Lake.  Their losses have been to Edina in the first game of the season, Breck, and Wayzata.  If there is such a thing as quality losses those would be it.  Even at number four in this ranking and being as high as that in others, one gets the feeling that Holy Family Catholic is flying under the radar.  With how they have performed, the Fire are now putting together their final ten games looking to get their playoff game on and dialed in.  Will Garin (16g-14a-30pts), Ethan Mesler (9g-12-21pts), and defenseman Matt Anderson (3g-18a-21pts) are the offensive leaders on the Fire who have nine players with 10 or more points through 15 games this season.

The Ponies skated to a rare 0-0 tie with White Bear Lake and defeated Woodbury last week.  The tie did little to impact the large lead that Stillwater has in the Suburban East Conference as they are ahead of second place White Bear Lake by two points with two games in hand at this point of the season.  Stillwater is searching for their first ever conference title in school history this year with designs on bigger things to come.  Section 4AA big-dawgs White Bear Lake and Hill-Murray will be waiting in line to stop those pans for the Ponies this year.  Three conference games pave the way this week for Stillwater with the grind of the SEC in full swing.  Three players have notched over 20 points for Stillwater who are led by Noah Cates (13g-17a-30pts), Luke Manning (14g-14a-28pts), and Jackson Cates (8g-13a-21pts).

With an impressive 7-1 win over the Andover Huskies, the Elks are now 2-0 in section 7AA games and currently hold the keys to the top seed.  They opened the season with 5 straight wins and then went on to lose three straight all to quality opponents.  Since the Edina Holiday Classic, the Elks have posted a 4-1-1 record with their lone loss coming to B-SM in a 3-2 game.  Three Northwest Suburban Conference foes are scheduled this week that closes out with two tough games against Anoka and Baine.

Two more wins were recorded by the Skippers who are 7-1 in their past eight games including wins over Hermantown, Bloomington Jefferson, and Edina in that run.  The Skippers open Lake Conference play this week with two games on the road at Hopkins and Eden Prairie.  Brendan Skarda (9g-10-19pts) and Joe Molenaar (7g-11a-18pts) are the Skippers leading scorers on a team with seven players who have notched 10 points or more in their 15 games played.  Goalie Thomas Hanson is 8-4 with a 2.31gaa and .918 save percentage.

After a stretch of going on a 2-4-1, the Hornets defeated and tied Hill-Murray and earned a convincing win over White Bear Lake in their last three games.  A rare Monday game is on the schedule at Hopkins this week and then Edina closes out the week with a home game against Wayzata.  Ben Copeland (10g-11a-21pts) and Sam Walker (9g-12a-21pts) lead the Hornets offensively.  Goalie Charlie deGrood has posted a 7-5-2 recored with 3 shutouts and a .902 save percentage.  The Hornets typically tune up their game in January and are ready to go for the playoffs.

The Thunderhawks were hammered by Hermantown, a high end Class A team, and that dropped them a couple notches to the ninth slot this week as that was the only loss recorded last week among teams in the top-10.  A Drake Anderson overtime goal was enough to defeat Duluth East last week and a 9-0 win over Andover has the Thunderhawks back on the winning track.  A big game will be played on Tuesday at Cloquet with Cloquet-Esko-Carlton.  Mitchell Mattson (13g-19a-32pts) leads the Thunderhawks in goals and points.

The Lumberjacks are sweeping through Mariucci Conference play and will continue with games against Moorhead and East Grand Forks this week.  Bemidji tied East Grand Forks in December and shutout Moorhead earlier this year.  The week is capped off against Hermantown who are 12-1-1 this year.  Three players have collected over 20 points this year with Brady Tatro (11g-12a-23pts), Alex Pollock (9g-13-22pts), and Nick Leitner (7g-15a-22pts) leading the charge of nine players in double digits in points this year for the Lumberjacks through 14 games played.