Lakeville North remains on top but Edina, Benilde are on the move 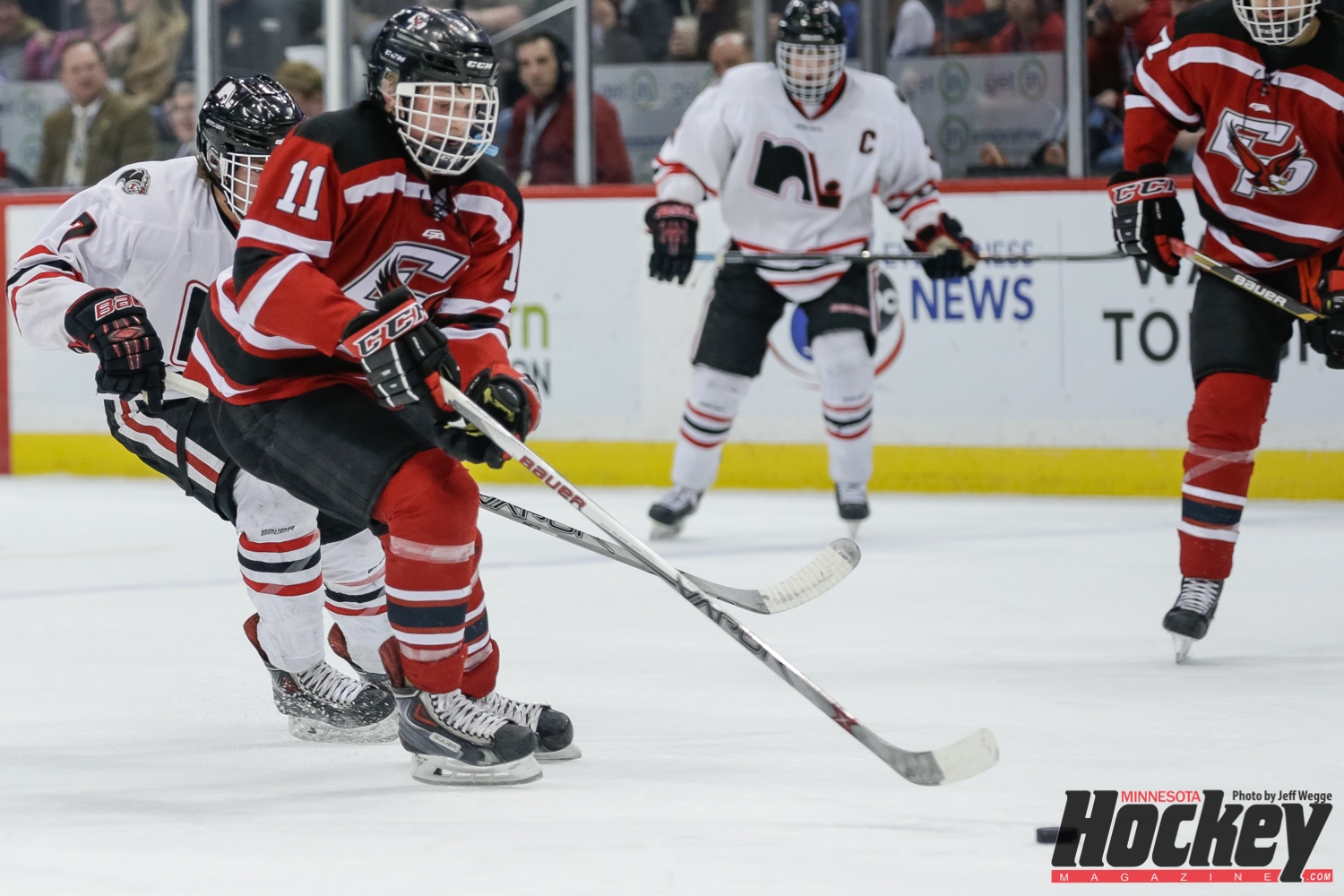 Lakeville North remains on top but Edina, Benilde are on the move

The Lakeville North Panthers hold the top spot in this week’s ranking for the third straight week and have yet to play a game.  Duluth East picked up an impressive win over Wayzata that handed the Trojans their second loss on the season. Benilde-St. Margaret’s climbed from 8 to 5 after opening the season with three straight wins including a 4-3 overtime victory in Grand Rapids.  Edina moved up two slots and hold the seventh position after hammering Farmington 7-0 and squeaking past Burnsville in overtime.  Wayzata slid out of the top ten and settles in at 11 this week after losing to Hermantown and Duluth East.  St. Thomas Academy debuts in the tenth slot this week and is 2-0 on the season.

The defending state champs will get their season underway after some teams have already played four games to open the season.  Stillwater is a solid team with state tournament aspirations that will provide the first test to the Panther season.

The Hounds opened with a 4-1 win over the Wayzata Trojans.  The Hounds entered the season with some injuries to top players and were not planning on rushing anyone back this early in the seson.  What was encouraging for the Hounds is the offensive production from underclassmen.  Freshman Brendan Baker had two goals and sophomore Ian Mageau chipped in a goal and an assist in the win.  Junior goaltender Kirk Meierhoff turned aside 24 of 25 shots he faced.  The Hounds will close out the week with a sectional game against Andover.

The Eagles delivered a statement in their first Section 2AA game of the season by doubling up Prior Lake.  The dynamic duo of Casey Mittlestadt (2g-2a-4pts) and Michael Graham (1g-2a-3pts) were joined by Cole Lawrence (2g-1a-3pts) in leading the Eagles to the win.  A pair of games are on deck this week for the Eagles, one at Farmington and one at home against Maple Grove.

The Bengals have scored 14 goals in two games with Luke Notermann (5g-3a-8pts) and Riley Tufte (2g-4a-6pts) leading the way.  They have Totino-Grace this week and head to Braemar Arena to face the No. 7 Edina Hornets in what will prove to be an intriguing early season match-up.  The Bengals are a veteran team while the young Hornets will be the stiffest test to date for the Bengals.

The Red Knights had an impressive first week of the season earning wins over St. Michael-Albertville, Marshall, and Grand Rapids, all on the road.  They continue with two more games away from the friendly confines of the St. Louis Park Rec Center this week . The Burnsville Blaze is waiting in the wings this week followed by a clash with No. 6 Hill-Murray.  That game can be viewed streaming live on MNHockeyMag.com.   Jerry Calengor (1g-5-6pts), Auggie Moore (3g-2a-5pts),  Zach Ristau (2g-3a-5pts), and Cade Gleekel (2g-3a-5pts) have provided depth in scoring for the Red Knights.

The Pioneers will play for the first time in almost two weeks against the surging No. 5 Benilde-St. Margaret’s Red Knights.  They continue with  Wayzata to close out the week. Ben Helgeson leads his team with two goals on the season.

Edina turned aside the challenge of the Farmington Tigers in impressive fashion last week.  A large contingency of fans from Farmington packed Braemar Arena creating a great environment for high school hockey.  Later in the week, after a slow start against the Burnsville Blaze, the Hornets rallied for a 4-3 overtime victory. It will be a busy week for the Hornets who travel to play new section rival Cretin-Derham Hall.  Centennial represents the first of two against Northwest Suburban teams the Hornets face this week with No. 4 Blaine set to close out the week.

The Lumberjacks are back in action with a game against Moorhead after earning a hard fought tie at Grand Rapids last week.  This year should prove difficult for teams to score on the Lumberjacks who have allowed one goal against in each for their games so far.  Scoring may be a challenge for them as well as they have notched just three goals in their first two games.

The first week was a grinder at home for the Thunderhawks.  After opening with a 1-1 tie against Bemidji, the Thunderhawks took care of business against Minnetonka.  The Benilde-St. Margaret’s Red Knights handed Grand Rapids their first loss of the season in overtime.  Three straight games away from the IRA Civic Center at Miners Memorial Building in Virginia, at Roseau and at Warroad this week will allow the Thunderhawks to grow as a team.

The Cadets delivered back-to-back home wins against Rosemount and Holy Angels this past week.  They face off against Section 3AA foe Eastview and close out the week against the Minnetonka Skippers.  Billy Jerry has picked up four points (2g-2a) in his team’s first two contests.