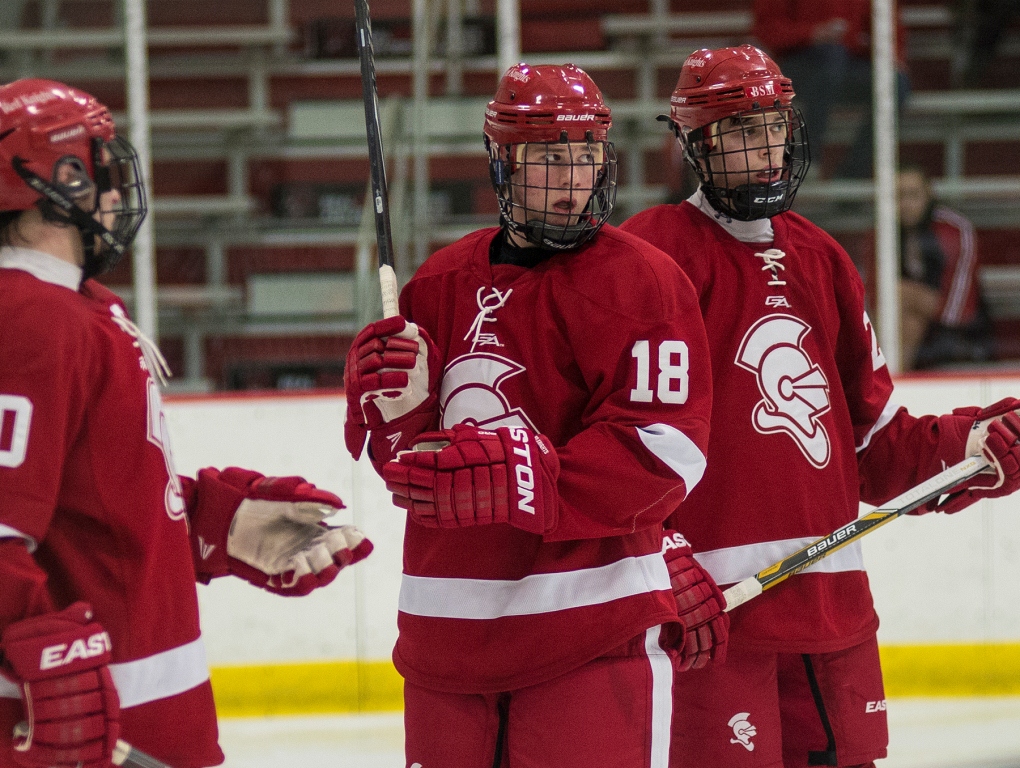 Connor Mayer (18) and Benilde-St. Margaret’s is off to an 8-0-0 start and No. 1 ranking in Class 2A this winter. Above, Mayer looks toward the Eden Prairie zone before last year’s game against the Eagles. (Photo by Tim Kolehmainen / Breakdown Sports USA)

The Eden Prairie Eagles only fall one spot after the tough loss to the Red Knights.

Moving up three slots to third this week is Stillwater who has not lost yet.  They have one top-10 win this year and it was a big one against the pre-season number one Lakeville North.  Blaine held steady at number four this week and Wayzata crept up four slots to fifth this week

The Duluth East Greyhound are in free-fall mode and tumbled out of the top ten with three straight losses last week to Cloquet-Esko-Carlton, St. Michael-Albertville, and Centennial.

The Benilde-St. Margaret’s Red Knights you have repelled all eight of their opponents this year.  They topped Woodbury last week and delivered a thrilling 6-5 overtime win over last week’s number one team Eden Prairie.  Blaine was handed their first loss of the season on Tuesday night with a Red Knight third period rally on goals by Jerry Calengor and Nick Austin.  With an impressive 4-0 record against teams that have been ranked in our top-10 this year, B-SM has been playing solid hockey from the opening face-off.  This week they cap off their four-game homestead with the Moorhead Spuds and travel to Hopkins for a Section 6AA game on Tuesday.

The Eagles swapped spots with Benilde- St. Margaret’s after B-SM won their game in overtime last week.  A win over Cretin-Derham Hall opened the week for the Eagles who are preparing for the Edina Holiday Classic that present three games in three days against high end teams in Edina, Grand Rapids, and Elk River at Braemar Arena.  All six games can be viewed on the MNHockeyMag.com.

The Ponies vaulted to the second spot in this week’s top-10 with a resume win in the opening week over Lakeville North.  They have been scoring goals in bunches averaging 5.67 per game.  While they only have one game against a top ten team it is the way in which they are defeating other teams that propels them to the third slot.  The high scoring Bloomington Jefferson Jaguars will present an interesting match-up for the Ponies and a conference game with Mounds View is scheduled of this week.

The Bengals have a challenging schedule and have earned wins over solid teams including Edina, Centennial and Elk River.  The one-two punch of Luke Notermann (8g-15a-23pts) and Riley Tufte (14g-8a-22pts) is proving to be near impossible to contain this year considering their production has come in just seven games played. Blaine saw a 3-2 lead slip away in the third period against B-SM that resulted in their first loss of the season this past Tuesday.  Two games are on deck this week with Minnetonka and Anoka waiting in the wings.

After a tough road trip that included back-to-back losses to Hermantown and Duluth East, the Trojans rebounded with four straight wins and have gotten back to their defensive ways.  In their four consecutive wins, Wayzata has allowed just 3 goals against and defeated two solid teams in Hill-Murray and Breck – a team ranked second in the Class A rankings.  The Trojans will face-off with Holy Family Catholic this week with a home game against Buffalo and a game at St. Thomas Academy before they take a break and open the Schwan Cup.

Edina will take to the ice after a long break.  They will have to hit the ground running with three tough games in three straight days against high end teams at the Edina Holiday Classic that include Grand Rapids, Elk River and rival Eden Prairie.

32 goals in five games and five straight wins have lifted the Fire to the seventh spot in this week’s top ten.  They took apart St. Thomas Academy 7-3 last week and crushed teams they were expected to beat.  Wins over Maple Grove, Lakeville South, and Minnetonka have added to their impressive start to the season.  There is only one game for Holy Family Catholic this week and it is a big test for their offensive surge against the Wayzata Trojans who have been defensively stout of late.

There is not a lot of sample size for the Panthers but enough to make it difficult to rank this team.  A 1-2 start after losses to Stillwater 6-5 and Farmington 5-3 knocked them down in the rankings.  The win over Grand Rapids actually keeps the Panthers in the top-10 this week which was a quality victory.  If the Farmington Tigers had not lost to Edina and Eden Prairie by a combined score of 12-1, they would have displaced the Panthers this week.  South Suburban games with Apple Valley and Rosemount are on deck this week.  The Panthers are the best 2-2 team in high school hockey.

The Thunderhawks won a key Section 7AA game against Cloquet-Esko-Carlton and had a tough loss in overtime to Lakeville North last week.  Their two losses this year came to teams that were ranked number one at some point this year.  The always humbling Edina Holiday Classic is next with three difficult games in a row at Braemar Arena.

The Lumberjacks are getting it done this year as expected.  They tied Grand Rapids and handled Moorhead so far this season.  Another difficult game is on their schedule this week with Brainerd and they play host to Roseau before heading to Duluth for the Holiday tournament.