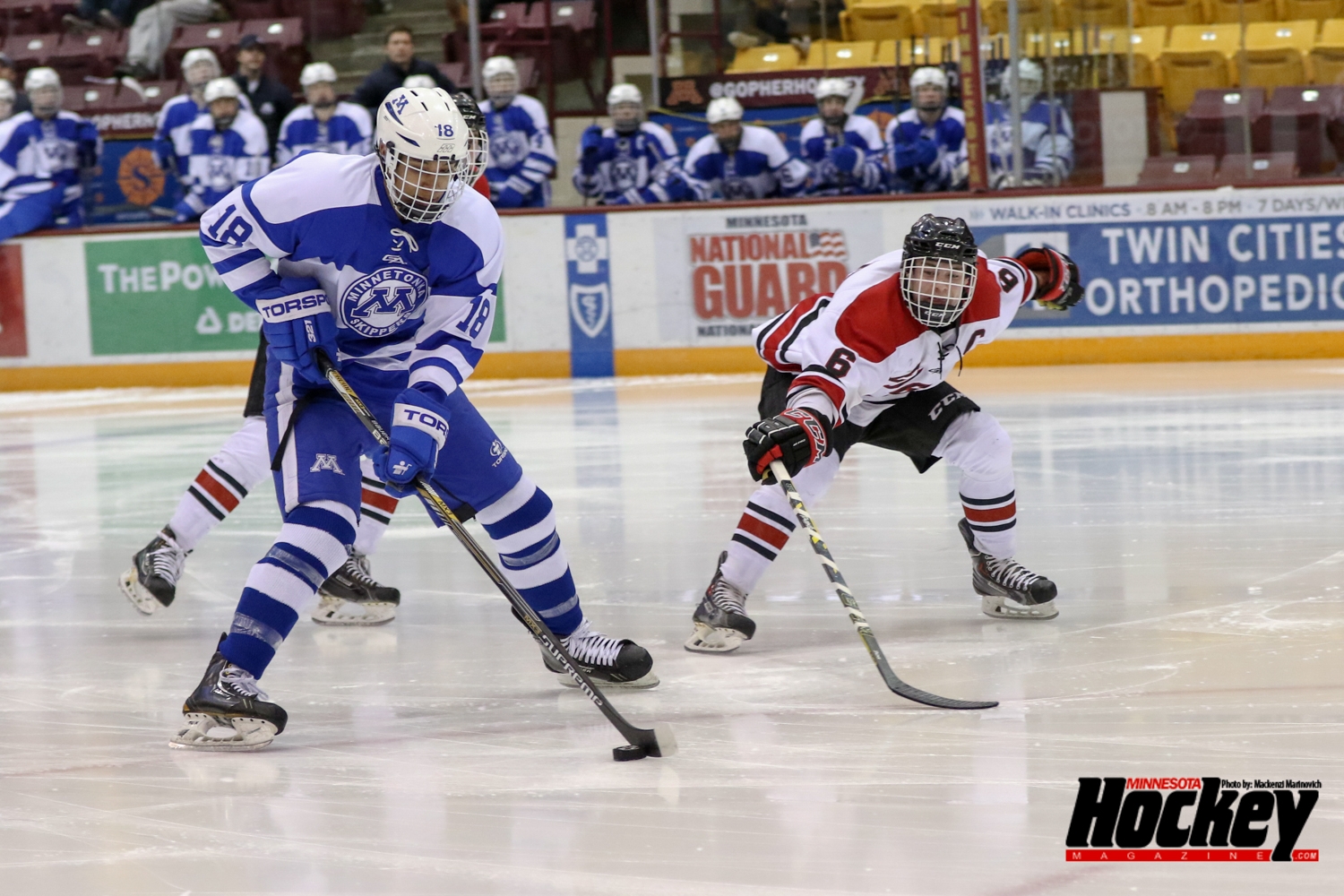 With three goals and 11 points, defenseman K’Andre Miller (shown here wearing No. 18 as a freshman having since switched to 19 as a sophomore) has contributed to Minnetonka’s rise to the upper half of the CrankApe.com boys Class 2A Top-10. MHM File Photo / Mackenzi Marinovich)

Week 10 saw no change among the top three teams with Benilde-St. Margaret’s, Holy Family Catholic, and Stillwater holding serve.  Minnetonka continued is ascent to the top of the pack as they checked in at the No. 4 spot.  Blaine is 2-2 in its last four games and fell to No. 6 this week.  Wayzata and and Centennial continued to move up this week by earning big victories.

After having a week off, the Red Knights traveled to Schmitz-Maki Ice Arena and faced a solid Farmington team.  The game was a 2-1 overtime win for the Red Knights as they needed almost the entire overtime period to get it done.  Cade Gleekel scored his 17th of the season with :24 remaining on the clock.  B-SM then went on to defeat Bloomington Jefferson 5-2 in a Metro West Conference game.  They have a non-conference game against Minnetonka which always brings plenty of energy and emotion between those two rivals on Tuesday.  Then, it is back to Metro West Conference play for the Red Knights who are tuning up for the stretch run of their schedule.

The Fire won their only game last week with a 7-1 win over Orono at the Victoria Recreation Center.  They will face a pair of Wright County teams next week as the Fire continue their assault on the rest of the conference.  Holy Family Catholic topped Delano 4-3 earlier this season and face a Litchfield/Dassel-Cokato team that is 14-4 this year.  Fire wins over Minnetonka, Lakeville North, Stillwater, St. Tomas Academy, and Prior Lake provide enough signature victories for the Fire to hold onto the number two slot this week.

The Ponies delivered an impressive win over Hill-Murray and established themselves as the team to beat in the Section 4AA.  What is more impressive is the Ponies averaged 5.6 goals scored per game over the last 5 games.  This offensively entertaining team has outscored opponents 99-35 this year.  They are behind Holy Family Catholic due to their head-to-head loss to the Fire earlier this year.  While two top-ten victories over Lakeville North and Hill-Murray are quality wins, the Ponies will close out the season with just four games against teams ranked in the CrankyApe.com Top-10 at some point this season.  Two of those games will have come against Holy Family Catholic.  Stillwater has taken care of business against teams they are expected to and are setting themselves up for what could be a memorable post season run.

One would think a loss to Wayzata would send he Skippers back in the top ten this week.  But, they do reside in the rugged Lake Conference where top teams take turns beating up on each other.  With a 4-3 overtime win and a second win against  Edina this year added to the Skipper ledger, Minnetonka lands in the fourth slot this week.  They are 6-5 against teams that have been ranked in the CrankyApe.com Top-10 this year.  The Skipper schedule calls for five of their last six games against top ten teams at one point this year making for one of the most difficult schedules this year and they have fared quite well.

The Eagles finished the week 2-0-1 after losing to Minnetonka in overtime last week.  They tied St. Thomas Academy with Michael Graham out of the lineup due to illness.  A convincing win over Boomington Jefferson and grinding 5-2 win over Hopkins teed up a big week of hockey for the Eagles this week when they take on Edina and Wayzata.  The Eagles are 8-1-1 in their last ten and continue to be on the short list of legit state title contenders this year.

A 5-2 loss to open the week didn’t help the Bengals cause as they fell out of the top five in the CrankyApe.com rankings for the first time this season.  The Bengals avenged a 6-3 loss to Anoka earlier in the season with a 4-1 win this past Saturday. Blaine continues their run through Northwest Suburban Conference teams with home games against Maple Grove and Andover this week. The one-two punch of Luke Notermann (19-32-51) and Riley Tufte (29-21-50) continue their productive season.

Three wins against quality opponents in their last three games have propelled the Trojans to the 7th slot this week.  After going on a rough 1-4-1 stretch that tossed the Trojans from the top ten, they have righted the ship by defeating Edina for the second time this year which is huge for sectional implications.  Wins over Minnetonka and Grand Rapids, two ranked opponents, are enough to keep Wayzata relevant.  They are still behind Minnetonka despite picking up the win against the Skippers as they have more ground to make up in their climb to the top five from their rough 6 game stretch.  Wayzata has a key contest with Minnetonka scheduled on Feb. 6.

The Cougars have won 7 straight and moved up to the No. 8 position this week with a 3-2 win on the road over Moorhead, a team that had won five straight.  Centennial will have a two key games this week with Elk River/Zimmerman and Brainerd/Pillager/Pierz.  What is an impressive is Centennial’s 7-1-0 in Section 4AA games including a solid win over Blaine a week ago.  With two more sectional games on the schedule, the Cougars have a chance to shore up their position in the section playoffs.

The loss to the Maple Grove Crimson has the Elks standing at 1-2 in their last 3 games.  While they are 5-2 in their last 7 games including a win over Lakeville North, the Elks have been playing well enough to maintain a spot among the top-10.  They have a tough week away from home with games scheduled against Centennial and Duluth East.  The Elks are 3-0 among Section 7AA teams so far this season and have played the fewest  games against opponents from within the section.  The Duluth East game will play large in the discussion for where teams will play out in the section seedings.

The Thunderhawks opened he week squeaking past Duluth Marshall in overtime and then lost to Wayzata before a packed house at the IRA Civic Center this past Friday.  Grand Rapids climbed right back on the horse and took down White Bear Lake 7-3 the following day to close out last week.  Just one game is on the schedule next week with Moorhead slated for Grand Rapids with three remaining on the season.  Don’t look now, but the season is just three weeks away from the final week and Grand Rapids is a team with a lot of talent that has developed over the long haul, positioning itself for a post season run in the competitive Section 7AA.