Prior Lake debuts, Panthers and Hornets with firm grasps at the top 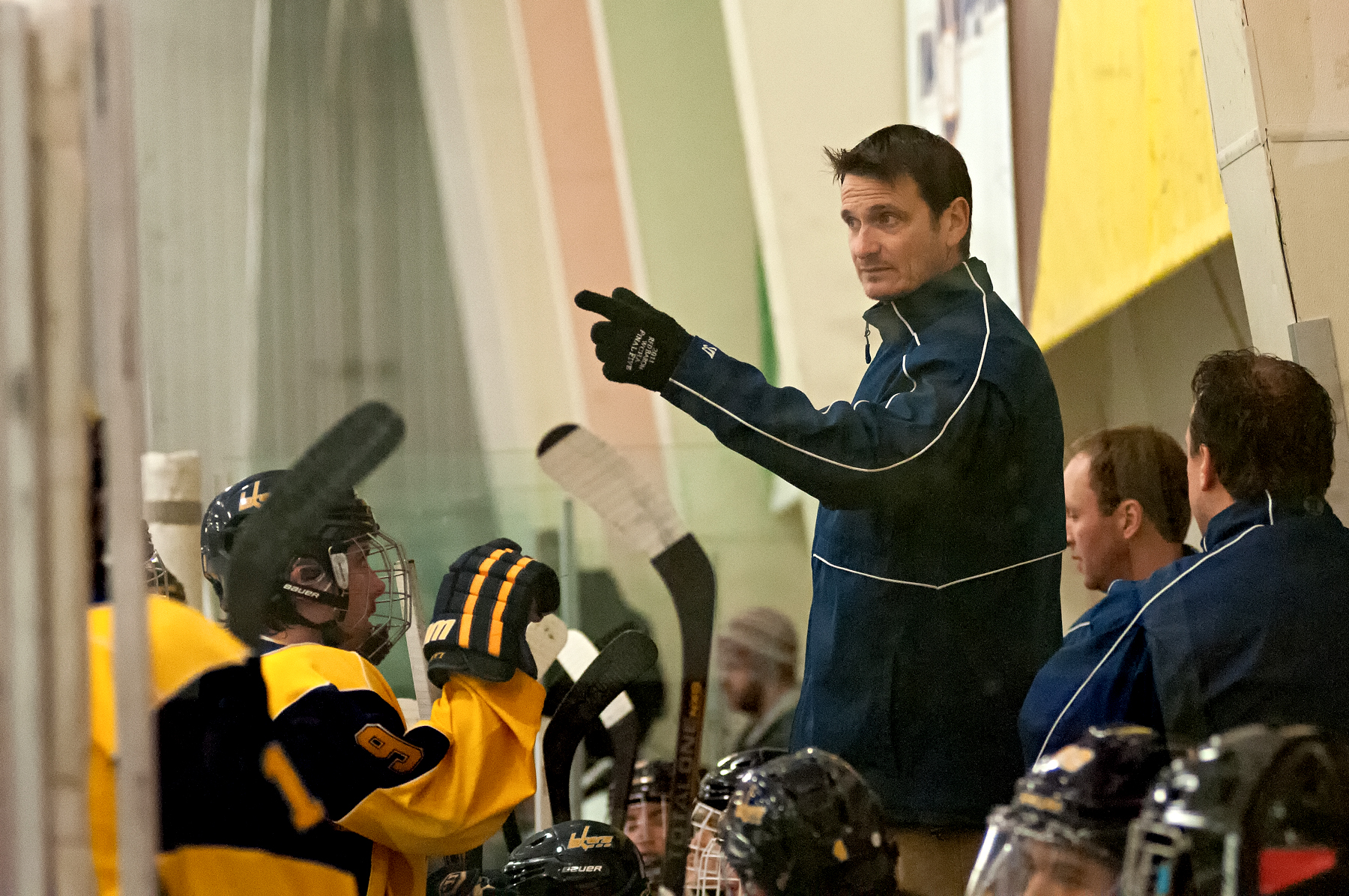 Prior Lake coach Joe Pankratz has the No. 9 Lakers dialed in for a Section 2AA run. (MHM Photo / Tim Kolehmainen)

Prior Lake debuts, Panthers and Hornets with firm grasps at the top

This week’s MHM Class 2A rankings once again find the top two teams in place. The only other team that maintained their position from last week was the Blaine Bengals. Teams have been dropping like flies in this entertaining season as the parity of high school hockey has never been better. Two teams, Lakeville North and Edina, have separated themselves from the pack but also have the potential to be tripped up on any given night. Prior Lake makes its debut in the MHM top ten this week.

The Panthers continue their stronghold at the top spot of the MNHockeyMag Class 2A top ten. It has been a perfect ride so far this year for the talented and deep edition from the South Suburban Conference. Lakeville North has two South conference games this week and one features a Rosemount team that pushed the Panthers to the limit in a 5-3 Lakeville North victory on Dec 18. Rival Lakeville South rounds out this week for the Panthers and it will be the second time the two teams meet this season. The first game resulted in a 4-1 Panther win over Lakeville South on Dec. 20.

Edina has scored goals in large numbers their last four games averaging over six per game in those wins. Consider that those opponents all have been ranked at some point this season in the MNHockeyMag rankings. Hill-Murray (6-3), Wayzata (6-3), Hopkins (8-4), and Minnetonka (6-2) all succumbed to Edina’s offensive prowess. The Hornets have only allowed four goals once this year and that was last week to Hopkins. They face off with the Edina Hornets at the EP Community Center on Thursday at 7pm with a 13 game streak without a loss (12-0-1) on the line. That game can be heard on Sports Radio 105 the Ticket.

The No. 3 slot in the MNHockeyMag.com rankings has not been kind to a lot of teams and it has seen its share of clubs make stops at it, only to lose it the following week. Despite the overtime loss on the outdoor sheet to Hill-Murray, the St. Thomas Academy Cadets have the impressive 16-win schedule with their only losses coming to rivaling Hill-Murray and Benilde-St. Margaret’s. Since the Hill-Murray loss, the Cadets responded with a 10-1 win over Totino-Grace and 9-2 wins over Simley. One can say they didn’t take too kindly to losing in responding with authority and that is a mark of a good team. The Cadets square off with Cretin-Derham Hall on Tuesday night. It will go a long way in determining who will have the No. 1 seed in the Section 3AA. The way things are shaking down in the section, it may only indicate which team will wear light and which will wear dark in the section final.

The Elks have been slotted in the fourth slot much of the season. They have had an outstanding season and all but wrapped up the Northwest Suburban North Conference title provided they take care of business down the stretch. Elk River has two home games this week. The first is with the always tough to play Centennial Cougars and they will have to safe guard against not looking ahead to their Saturday game with the Duluth East Greyhounds. A win would give the Elks a 5-0 record among Section 7AA teams and a sure fire lock on the Section 7AA top seed. One can argue, they have that top seed already locked up as well.

The Bengals are a solid 6-0-1 in their last seven games that included an impressive 5-2 win over the Benilde-St. Margaret’s Red Knights last week. They dispatched the Champlin Park Rebels 3-0, and tied Anoka 3-3 on Saturday. The tie is nothing to be ashamed of against a steady Anoka Tornado team (9-7-1) that is making a statement to be the number two seed in the Section 5AA behind Blaine. The Bengals are playing a playoff style of hockey right now and are earning wins against top teams in conference and non-conference play. They are in position to close the season out with a string of wins and have a favorable week to continue that trend.

The Raiders are 9-0-2 in their last 11 games and are on a roll finding themselves one of the top three hottest teams in hockey behind perpetually hot Lakeville North and Edina. The Raiders lead the competitive Suburban East Conference ahead of White Bear Lake, Stillwater, and Roseville. A huge statement game is on the menu this week with the St. Thomas Academy Cadets in non-conference action. Later in the week, it is the Raiders head back to conference play with Woodbury an Mounds View. Defensively, the Raiders have been stout over their 11-game stretch allowing just 16 goals against during their winning streak. A note to watch for in their game with St. Thomas Academy on Tuesday will be if the disciplined defensive structure, neutral zone play, forecheck, and goaltending can hold up against the offensively gifted Cadets who can hang onto the puck for long periods of time and receive steady goaltending.

A loss at the hands of the impressive Mahtomedi Zephyrs (4-0) cost the Pioneers four slots on the top ten. A game on Thursday with Simley should prepare the Pioneers for a sectional show down with the White Bear Lake Bears scheduled for Saturday. Always a riveting affair when White Bear Lake and Hill-Murray dance, it will take each team a long way in the battle for the top seed in the Section 4AA. All of Hill-Murray’s losses have come to teams that were or are part of the MNHockeyMag.com top ten.

After losing two straight games to Class 1A powers East Grand Forks (4-1) and Hermantown (6-1), the Lumberjacks bounced back with two wins last week. They have proven to be the elite of the Section 8AA and are fast tracking their first State Tournament berth since the late George Pelawa year of 1986. Games with Roseau and River Lakes this week are on the slate for Bemidji. Wins over those two teams will further cement their number one seed and status in the section.

The Lakers stand in second place of the South Suburban Conference and when the season started, this is a team that was believed in this space to be a potential Section 2AA finalist. They have certainly proven that they are among the top teams playing ranked opponents close with a 2-4 record. Three of their four losses to those opponents were by one goal. The offensive minded Minnetonka Skippers will travel to Dakotah Ice Center for the Lakers lone home game this week. Eastview and Shakopee round out the Laker schedule in conference play this week.

One could not ask for a bigger week than the White Bear Lake Bears have before them. Two Section 4AA foes are on deck with the 14-win Stillwater Ponies, last year’s section champion, set to play host to the Bears on Thursday. The week concludes with the annual rivalry game that features the Bears and Hill-Murray at the Vadnais Sports Center on Saturday night at 7:15pm that game can be seen on www.thehornwbl.com. Two White Bear Lake wins could propel them to the top seeding of the Section 4AA. A top spot in section seedings could be critical to advancing to the State Tournament this year. It certainly would make life a lot easier to avoid having to play both Stillwater and Hill-Murray to advance. A Friday night loss to the sizzling Hermantown Hawks, who turned aside the Bears by a score of 4-2 last week, illustrated how impressive the Class A power is. The Bears rebounded with a 5-0 shutout over the Grand Rapids Thunderhawks the following evening which had to make Tim Sager pleased with how his club responded.