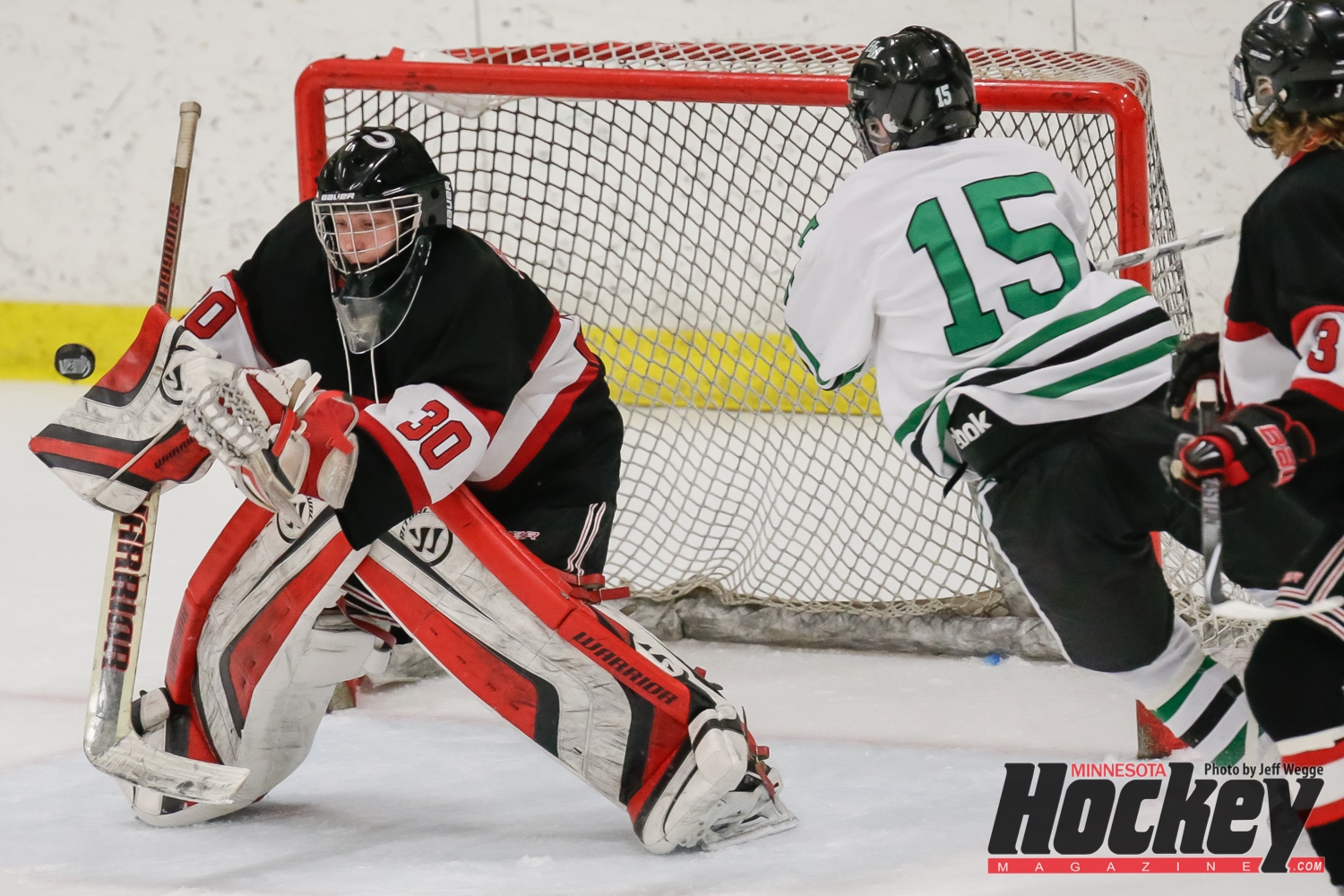 This week, Class AA features a new number one team in the Eden Prairie Eagles who seized the top spot after the Lakeville North Panthers were defeated by the Stillwater Ponies to open the season last week.  The Benilde-St. Margaret’s Red Knights vaulted past three teams and landed in the number two slot after a productive week of victories.  Meanwhile, Duluth East fell one notch to third this week.  Stillwater debuted at No. 5 with their 3-0 start and win over Lakeville North.  Watch out for Brainerd/Pillager/Pierz who is about to crack the top ten.

The Eagles earned the top spot in this week’s rankings by defeating some solid hockey teams early in the year.  Cole Lawrence (3g-9a-12pts) leads the offensive charge for his team with highly touted prospects Casey Mittelstadt (5g-4a-9pts) and Michael Graham (3g-6a-9pts) joining Lawrence atop the Eagles offensive leader board.  Wins last week included stopping Farmington and Maple Grove.  The Cretin-Derham Hall Raiders gave the Eagles some push back but were eventually worn down in a 4-0 loss at the Eden Prairie Community Center.  Up next is a clash with No. 2 Benilde-St. Margaret’s this Friday night and it can be seen streaming live on the MNHockeyMag.com.

The Red Knights opened the season with a 4-0 start on the road with impressive wins over Grand Rapids, Burnsville, and Hill-Murray.  They returned home to face the hard working Woodbury Royals and skated off with a 4-2 win on Tuesday night.  B-SM has outscored its opponents 33-9 so far this year and goals are coming from numerous sources.  One constant has been Cade Gleekel (6g-7a-13pts), who leads the way offensively for the Red Knights. Balance, depth, creativity, and puck movement have been the key to the Red Knight formula who could very well be the most entertaining team to watch in high school hockey.

Even though the Hounds have been perfect to start the season, they battled through a 2-0 win over the Apple Valley Eagles last week and a 6-5 slugfest with Section 7AA rival Andover Tuesday night.  Waiting in the wings this weekend is one of the Hounds biggest rivals, the Cloquet-Esko-Carlton Lumberjacks.  Regardless of the situation, when those two teams play it is a battle to the finish.  Duluth East fell one spot from second to third in this week’s rankings not for anything they didn’t do as the Hounds won their games, but it was more about what the Red Knights did against some high end competition the past two weeks.

26 goals in the Bengals first three outings were enough to put the Edina Hornets on notice when the two teams met this past Saturday at Braemar Arena.  The Bengals rallied from a two-goal deficit in the third period and forced overtime.  Riley Tufte scored his 8th goal of the season in overtime to lead Blaine to the victory.  Key Northwest Suburban Conference games are on deck this week for the Bengals who will be challenged by neighbor and rival Centennial and the 3-0 Elk River/Zimmerman Elks.  Luke Notermann entered the season on the MNHockeyMag.com short list of Mr. Hockey finalists and he is looking every bit the part with (7g-10a-17pts) to lead his team.

It is hard to ignore their season-opening 6-5 victory over the defending state champion Lakeville North Panthers last week.  The Ponies did not celebrate too long as they were charged with facing a solid Roseville Area Raider team two days later and the Ponies came through with a 5-2 win.  Stillwater also turned aside the challenge from the Cretin-Derham Hall Raiders in Suburban East Conference play by a score of 5-1.  They continue their run through the SEC with games this week that has resulted in a 7-1 thrashing of Hastings, East Ridge, and Park of Cottage Grove.  The Ponies have scored 23 goals in four games with TJ Sagissor (9g-3a-12pts) leading his team in goals and Luke Manning (4g-7a-11pts) is right behind in points.

The big news of last week centered around the Panthers opening season loss to the Stillwater Area Ponies.  The two teams were among the last to get their seasons started yet the game did not disappoint.  The Pony win did put the league on notice that the Panthers can be defeated and that Stillwater is to be contended with.  It was Shakopee that felt the wrath of the Panthers who lit them up for 10 goals in their 10-1 win late last week.  Farmington and Grand Rapids are on deck this week.  Both games will present solid challenges for the Panthers.

The Lumberjacks win over Thief River Falls yielded 3 goals against which are the most allowed by Bemidji this season.  A quality win over St. Cloud Apollo, which is a high-end Class 1A team, a tie with No. 8 Grand Rapids, and a stout 5-0 win over Section 8AA rival Moorhead have illustrated that the Lumberjacks will be factor throughout the season. Games with Warroad and Rogers are slated for this week.  Circle the calendar for a game on 12/19 that features a Section 8AA matchup with Dave Aus’ Brainerd/Pillager/Pierz.

After starting the season 1-1-1 including a 4-3 overtime loss to No. 2 Benilde-St. Margaret’s, the Thunderhawks have won four straight games cleaning up on Iron Range and Mariucci Conference opponents.  A successful road trip concluded with a 5-3 win at Roseau and a 5-2 win over Warroad this past weekend and the Thunderhawks continued their winning ways with a 5-0 win over CEC to open this week.  Grand Rapids averages 4.57 goals scored per game with North Dakota recruit Mitchell Mattson averaging two points- per-game 4g-10-14pts).

The pattern has been to win two, lose two, win two for the Trojans.  Their resume is impressive with wins over Edina (4-2), Hill-Murray (2-0), Maple Grove (3-2), and Andover (7-1).  There are two teams on the schedule this week that will determine if the pattern will continue and will present a test for the Trojans.  Anoka is 3-1 to start this season and the Breck School is a top rated Class A power.  Billy Duma (3g-4a-7pts), and North Dakota bound Mark Senden (0g-6a-6pts) lead the way offensively for the Wayzata.

The Hornets take the week off, and at 5-2 could make an argument that they are an eventual top five team this year, yet at this stage the two losses move them down the ladder.  Their win over Cretin-Derham Hall was a key Section 6AA victory for the Hornets.  They went on to handle Centennial and saw a two-goal third period lead dissipate against Blaine that turned into a 4-3 overtime loss for the Hornets.  One thing Edina will learn when the gauntlet of teams face-off at the Edina Holiday Classic that include Eden Prairie, Elk River, Edina, and Grand Rapids is where not only Edina but the other three teams stand.