Fire putting the heat on BSM while Skippers sail upward 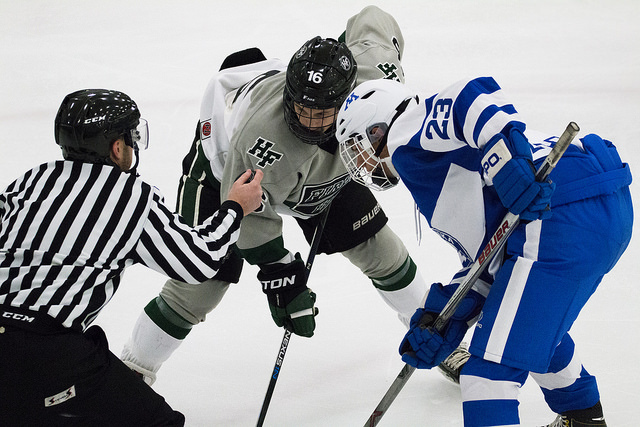 Will Garin (16) and the Holy Family Catholic Fire vault to No. 2 this week while T.J. Rogers (23) and the Minnetonka Skippers crack the top-5 in this week’s CrankyApe.com Class 2A Top-10. (Photo by Joe Esenther / The Phoenix)

Fire putting the heat on BSM while Skippers sail upward

It is anyone’s guess as to who the top ten teams really are anymore this year.  What is known is the Benilde-St. Margaret’s Red Knights have earned the top billing and continue to do so for six consecutive weeks by pulling away from the field with a 15-0-1 record.  While they were idle last week, the rest of the top ten teams took turns in winning and losing big games along the way.  Making the big move was Holy Family Catholic as they surged to the number two slot.  Not far behind is Stillwater, who like Holy Family, is feasting on its conference games.

The Minnetonka Skippers have been workmanlike in climbing the ladder earning the fifth slot this week with a hard fought overtime win over the Eden Prairie Eagles.  Wayzata defeated Edina for the second time this year and knocked the Hornets out of the top ten yet are 2-4-1 in their last seven games which keeps the Trojans from the top ten this week.  From week to week, the top ten remains a work in progress with plenty of movement and certainly offers a lot of opportunity for discussion.  Centennial and Hill-Murray are the two newest teams to enter the top ten this week. Hill-Murray’s decisive 7-1 win over Wayzata a few weeks back coupled with a four game unbeaten streak propelled them past the Trojans to the No. 10 slot this week.   All of the movement signifies what should be a dramatic section and state playoff run for all teams this year proving it will be wide open.

The Red Knights had the week off to work on their game, not that it needed much, but they will be asked to come off their break against a very good Farmington team this upcoming week that cracked the top ten in the No. 9 position.  A passionate Schmitz-Maki Arena will await the Red Knights with some of the best fans in high school hockey.  B-SM will return to Metro West Conference play when they invade the Bloomington Ice Garden and face-off with the Bloomington Jefferson Jaguars.

The Fire are winners of six straight and 11 of their last 12.  Questions surround this team more from curiosity among fans in high school hockey that have not seen the Fire play over the course of the season.  The Wright County Conference does not do them any favors with Fire being the only Class 2A team in the conference.  Their win over Stillwater combined with solid wins over Minnetonka, St. Thomas Academy, Lakeville North, and Prior Lake is enough to propel them to the second slot in the ranking this week.  They have just one game this week, against Orono, and will finish the final stages of the season with Class 2A madcaps against Hopkins, Duluth Marshall, Grand Rapids, STMA, and a re-match with Stillwater.  That stretch will say a lot about where this team stands in the elite of the Class 2A.

The Ponies moved up from the fifth spot to the third this week with three wins.  They outscored their Suburban East Conference opponents by a combined 16-5 last week continuing their offensive surge this year and are running away with the conference which would be their first conference title in school history.  They have an East Ridge team that has played solid defensive hockey and will present the Ponies with some potential goal scoring challenges.  A huge section 4AA game is on the schedule this week with Hill-Murray who is 5-0 against section opponents.  The Ponies are 4-0-1 and a win would position them for a potential top seed if they take care of business the rest of the way.

The Bengals are slotted two spots ahead of Eden Prairie as both clubs hold identical records.  Even though the Bengals were worked by Centennial last week, the win over Elk River carries a lot of credibility.  Blaine has defeated both Minnetonka and Blaine already this year and has added signature wins over Edina, and Duluth East.  Two tough games are on deck this week for the Bengals and both on the road at Hill-Murray and Anoka.

The Minnetonka Skippers have gone about their business in coach Brian Urick’s typical workmanlike fashion.  They have defeated St. Thomas Academy, Hermantown, Edina, and Eden Prairie in their march to a top five ranking this week.  They were topped by Grand Rapids by a score of 5-2 to open the season.  The play for the Skippers since the first of the year has been impressive with 9 wins in their last 10 games including 5 in a row.  The upcoming schedule is a grinder with Wayzata (twice), Edina (twice), B-SM, Hopkins, EP, and Duluth East on the calendar.  That could be the toughest final 8 games anyone has on the schedule.

The Eagles were stopped in overtime by Minnetonka in Lake Conference play this past Saturday and were chasing the game from the opening face-off having never led. Two of their three losses have been in overtime to B-SM and Minnetonka.  The other was a 5-2 loss at the hands of the Blaine Bengals.  A steady week for the Eagles should keep them on track as they are indeed one of the top teams in the state and on the short list as a title contender this year.

The Elks fell to a quality Blaine Bengal team last week for the second time this season.  All five of their losses have come to teams that have been in the top-10 this year. Blaine (2), Edina, Eden Prairie, B-SM.  They have defeated Grand Rapids and Lakeville North to hold a 2-5-1 record against those teams with the tie coming to this week’s #10 Centennial Cougar club.  Two Northwest Suburban Conference games are on tap for Elk River this week who carry a 2-0-0 Section 7AA record and the Andover game will double as a conference-section game.

It has been 4 straight wins for the Thunderhawks since they were hammered by Hermantown 5-0 a couple of weeks back.  They posted a 5-2 win over Minnetonka in the early part of the year and followed that up with a controlling 6-4 win over Edina right after that.  They are 3-5-1 against teams that have been ranked in the top-10 at some point this year including Class A power Hermantown.  That is not enough to propel the Thunderhawks to top-five status this week.  Do not count this team out as they have the talent to win the big prize in St. Paul.

The Cougars had a rough holiday run where they were 0-3-1 over a four game stretch.  Since then, they have bounced back with four straight wins over the past two weeks.  The have three games against teams that will provide a variety of games with non-conference games against White Bear Lake and Moorhead and conference foe Maple Grove.  Tyler Nyman (8-17-25) and Matthew Jennrich (8-11-19) pace the way offensively for the Cougars.

On the strength of a 3-0-1 record in the last four games, the Pioneers have landed back in the top ten. They have quality wins over Wayzata (7-1) and St. Thomas Academy (1-0).  They also tied Edina 3-3 after losing a close game 5-4.  They have a huge game with No. 4 Blaine to open the week and close out with No. 3 Stillwater in a critical Section 4AA tilt.