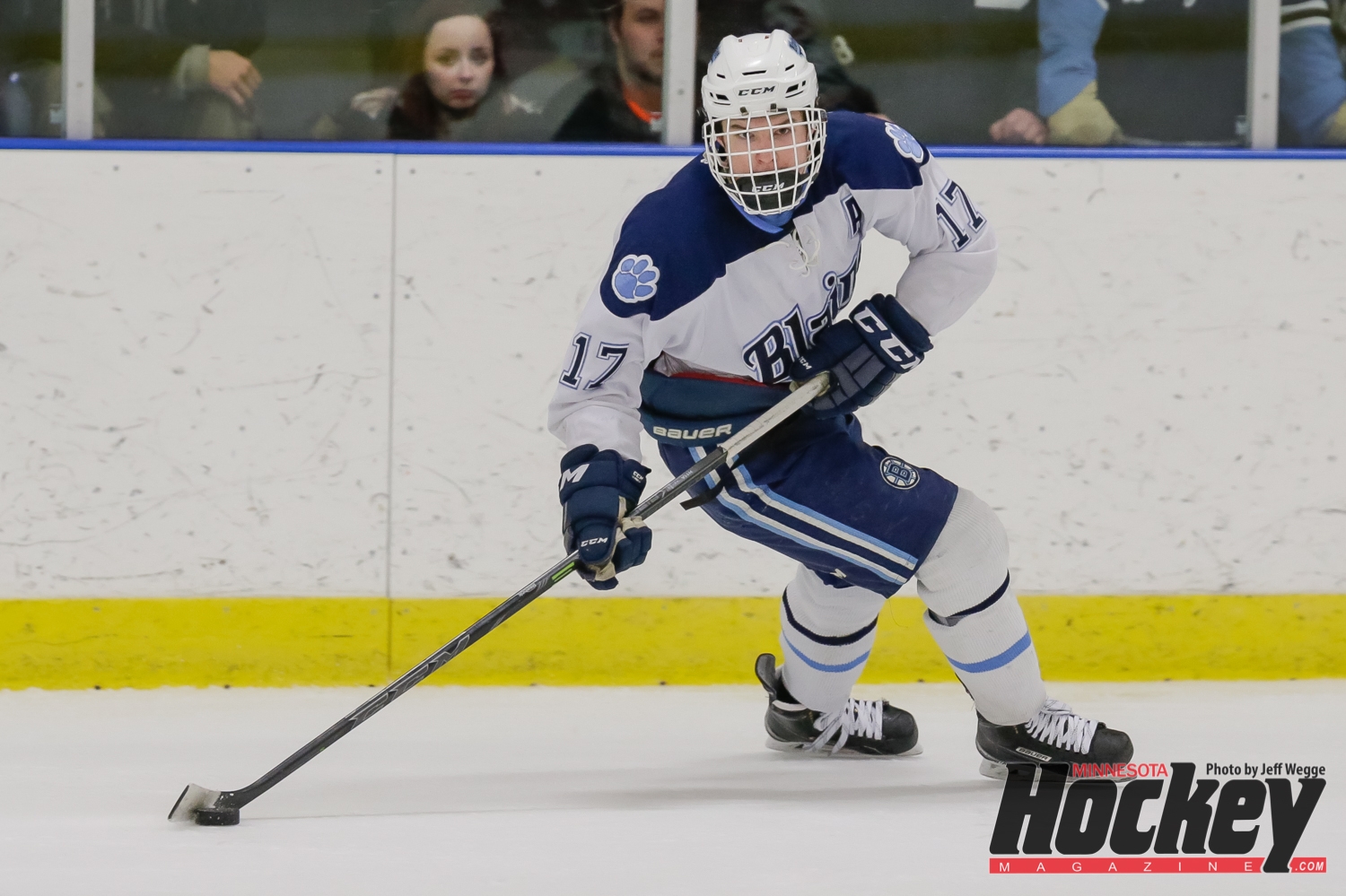 Luke Notermann and the No. 2 Blaine Bengals have their sights set on supplanting Benilde-St. Margaret’s at the top of the CrankyApe.com Class 2A rankings. (MHM Photo / Jeff Wegge)

Our weekly boys’ prep hockey Top 10s are brought to you courtesy of CrankyApe.com

Most teams are at the midway point of their schedule having played a dozen or so regular season games this year.  The Benilde-St. Margaret’s Red Knights held serve this past week and maintain the top spot in the CrankyApe.com top-10 with a 2-0-1 record at the St. Louis Park Holiday Classic.  The Blaine Bengals seized the 2nd slot this week and Eden Prairie landed in the 3rd position after capturing the Schwan Cup Gold Division title.  Elk River was the big mover this week as they went from the 12th spot to 7th after having an impressive St. Louis Park Holiday Classic.

The Red Knights battled through the Sports Authority St. Holiday Classic with a pair one-goal wins over Elk River/Zimmerman and Maple Grove in overtime.  Those came after opening the three-day event with a 4-4 tie against Lakeville North.  Three games are on deck for B-SM this week with St. Thomas Academy in non-conference action and Chanhassen and Bloomington Jefferson all waiting in the wings with Metro West Conference play.  It is a benefit for the Red Knights to play in the SLP Holiday Classic as they wind up having ten of their last eleven games played out at the friendly confines of the St. Louis Park Rec Center.  They opened the season with five away games.

The Bengals posted an impressive 5-2 win over Eden Prairie and delivered a pair of five-goal games in wins over White Bear Lake (5-0) and Duluth East (5-3) sticking with their 5.25 average per game.  Luke Notermann (12g-26a-38pts) and Riley Tufte (22g-15a-37pts) are on a 3-point-per-game pace and tearing it up this year.  Two conference games are on the schedule this week for the Bengals.

The Eagles swept the Schwan Cup Gold division with wins over Burnsville, Hill-Murray and Minnetonka.  Each of those three teams were in the most recent CrankyApe.com top-10. However, there is a fine line between the bottom half of the top-10 and the next 10 to 15 teams and that proved itself out last week as Minnetonka debuted in the top-10 this week.  Eden Prairie bounced back from their 5-2 loss to the Blaine Bengals two weeks ago.  That loss places them one notch blow Blaine in this week’s rankings.  This week takes a northern flair for the Eagles as they play host to Cloquet-Esko Carlton and Duluth East.

A three-game sweep at the Sports Authority Holiday Classic and posting 8 wins in their last 9 games is enough to propel the Fire to top-four status this week in the rankings.  Quality wins over Stillwater, Lakeville North, and Prior Lake capped off a fantastic New Year’s week for Noel Rahn’s hockey cub.  They have earned signature wins over Minnetonka and St. Thomas Academy this year.  The Fire head back to conference play this week with games at Delano and New Prague.

After losing their first game of the season to Holy Family Catholic, the Ponies came back and hammered Maple Grove (8-2) and put a solid game together against Moorhead (6-2) to round out the St. Louis Park Holiday Classic playing some very good hockey last week.  The busy week was capped off with a 4-1 Suburban East Conference win over Forest Lake.  Woobury and  White Bear Lake will travel to the St. Croix Rec Center to face-off with the Ponies this week and if they take care of business could enter the second half of the season with just one loss which is impressive.

All four of the Grand Rapids’ losses have come to teams that were ranked in the top-10 including its lone tie.  The Thunderhawks got past Brainerd in a tightly-contested 6-5 game last week and handled Forest Lake in a sectional game improving their record to 2-1.  This week will be a big week for Thunderhawks fans with three games on the menu at the IRA Civic Center.  All three games are against Section 7AA teams and will take them a long way in their seeding and positioning with three wins to a top one or two seed come playoff time.

The Elks had a solid week at the St. Louis Park Holiday Classic.  Wins over Prior Lake and Lakeville North can be considered signature wins this year and they played Benilde-St. Margaret’s tough as well.  That effort last week lifted the Elks to the 7th spot in this week’s rankings.  The Elks have one game this week when they face Andover with Section 7AA implications.

This Week:  vs Academy of Holy Angels, vs Blake School

The Skippers earned the 8th spot this week with an impressive showing at the Schwan Cup.  They opened the Gold Division with a pair of 3-2 wins over Centennial and Edina and then were stopped by Eden Prairie by a score of 4-3.  They closed out the week with a 9-4 win over Totino-Grace and are 6-1 in their last seven games with signature wins over Hermantown and Edina.

The Hornets are 4-4-1 in the last nine games and opened the Schwan Cup Gold division with a regulation tie and subsequent shoot-out win over St. Thomas Academy.  They followed that up with a loss to Minnetonka and outlasted Hill-Murray with a 5-4 win.  A non-conference 6-1 victory over White Bear Lake closed out the up and down week for Edina.  This is a team that is 2-4 against ranked teams and over the past three weeks have played well enough to stay in the top-10 yet not great enough to be in the top five.  Never count the Curt Giles led edition out in the end as they will always factor in the final say.

The Lumberjacks were stopped cold in the opening round of the Hilltopper Classic by Cloquet-Esko-Carlton in overtime. They rebounded with a pair of wins that combined or a 12-2 margin righting the ship.  The Jacks have allowed four goals against just twice this year and will continue to ride that strength throughout the year.