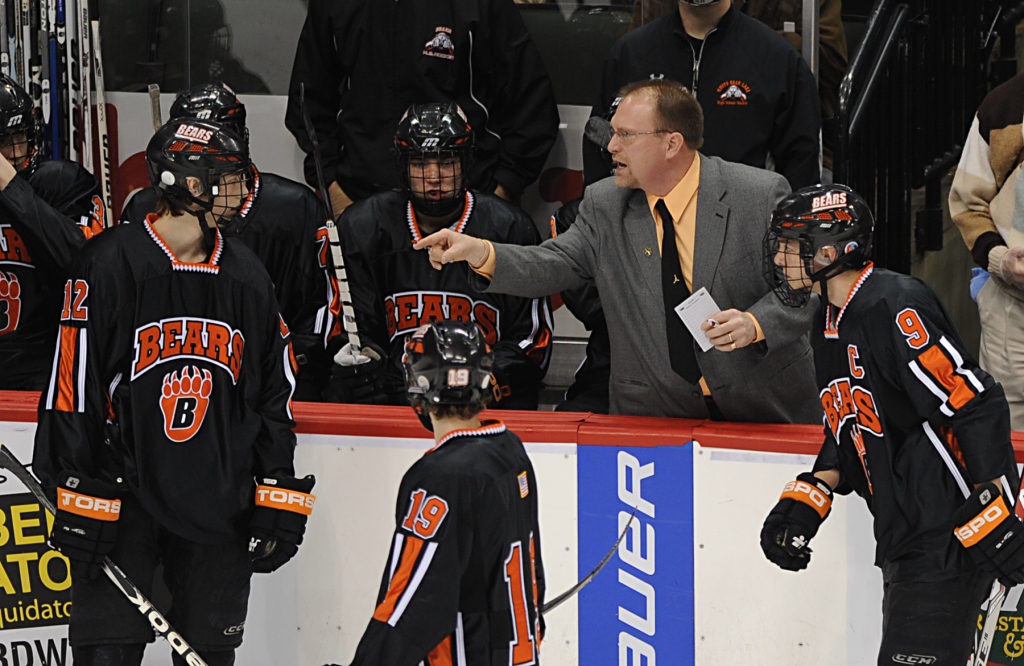 The Panthers are on cruise control as they prepare for the upcoming Section 1AA playoffs. With two games remaining on their schedule, Lakeville North is in position to enter the post season with a perfect 25-0 record, having held the top spot all but one week in the MNHockeyMag.com top ten. They have two conference games this week against Eastview (11-11-1) and Shakopee (2-19-2). This season has been nothing less than impressive for the Panthers who are preparing for a run at the state title.

Either the Lake Conference is really down this year or the Hornets are that good – or it is a combination for the two. Consider that Edina has outscored its conference opponents 39-11 and 6 of those goals against were to Hopkins. Edina ran away with the conference title and still have two games left. Edina is playing the best hockey of any team in the state and will be difficult to beat in the sections and state tournament. As usual, Edina has solidified their game in all three zones and have found their groove with a power play clicking at just under 25%. Remember, their power play was in the low single digits through the first four weeks. They are seriously eyeing their third title in a row.

All three of the Cadets losses have come since Jan. 13 and their most recent was to the Mahtomedi Zephyrs who are on the short list for a State Class A title this year. Their other losses were to Hill-Murray in overtime on Hockey Day Minnesota and Benilde-St. Margaret’s. A 17-win Breck team and 16-win Holy Family Catholic team await St. Thomas Academy this week that will play three games in four days to close out the season with a flurry. A win over Hastings would propel STA back to first place in the Metro East by a point and should Hill-Murray win their final conference game against the difficult to play against Tartan Titans, the two teams would share the conference title.

The Elks are in position for a 20-win season and have wrapped up the Northwest Suburban North Conference title going into their last game of the season with Armstrong/Cooper. The Elks had an offensive explosion in defeating three teams by a combined 29-4 all after their 1-1 tie with section rival Duluth East. The Elks are 7-4-1 against teams that have been in the MNHockeyMag.com top ten at some point this season. They split with Blaine and, given their sterling 11-1-0 conference record and title, get the nod one slot ahead of Blaine this week.

The Eagles somewhat resemble a certain professional team this market has come to know and love with its streaky play on the ice. Consider the Eagle opened the season 5-0. They followed that up with a 3-5 stretch and are now on a 5-1-0 run including three straight over formidable foes. They are playing the best hockey of the Section 6AA teams at this stage of the season and will be looking to finish the campaign out strong with games against Hopkins and Edina.

The Pioneers fell to St. Thomas Academy last Saturday and can earn a share for the Metro East title with a win over the Tartan Titans and if the Cadets defeat Hastings in their conference finale. Hill-Murray will close out their season with their annual tilt against the Moorhead Spuds who are 14-7-0 and playing their best hockey of the season right now and are 5-1-0 in their last six games. Zach Mills (19g-19a-38pts) and Marko Reifenberger (18g-14a-32pts) pace the offensive production for the Pioneers who are preparing for one of the most competitive Section 4AA brackets in recent seasons.

The Bears are 6-1 in their last seven games. During that stretch, they have played in four one goal games going 3-1 in them. The edged past Roseville (1-0) and Woodbury (2-1) in big conference wins setting up a winner-take-all game with Cretin-Derham Hall for the Suburban East title. A win by the Bears gives them an impressive 20-win season led by senior Tom Giller (18g-27a-45pts) who has had a big season for his club leads a trio of upperclassmen who are providing coach Tim Sager’s team the leadership required to go to the next level. Brady Anderson (10g-21a-31pts) and AJ Welch (14g-17a-31pts) complete the group who are poised to make a run in the Section 4AA this year.

The Fire have won 10 games in a row since a 5-3 loss to Delano in Wright County Conference play on Jan. 6. They have improved throughout the season and, given the 11-0 loss to Edina in the first game of the season, have made the long climb to the top ten of the MHM Class 2A. An argument can be made that they could be seeded as high as number two in the Section 6AA and as low as number 5. Expect them to fall in the third or fourth slot with the ability to win some games along the way. Their 4-1 win over Prior Lake coupled with the Lakers losses to Lakeville North and Farmington lifts the Fire to the ninth position this week.

The Raiders are in position to capture the Suburban East Conference and are 7-1-2 in their last 9 games. Nick Reis (12g-21a-33pts), Brett Huebner (12g-16a-28pts) lead the way offensively for the Raiders. They have two strong games on the schedule with White Bear Lake on Thursday and a game at Bloomington Jefferson on Saturday.