Battle for position heating up as season winds down 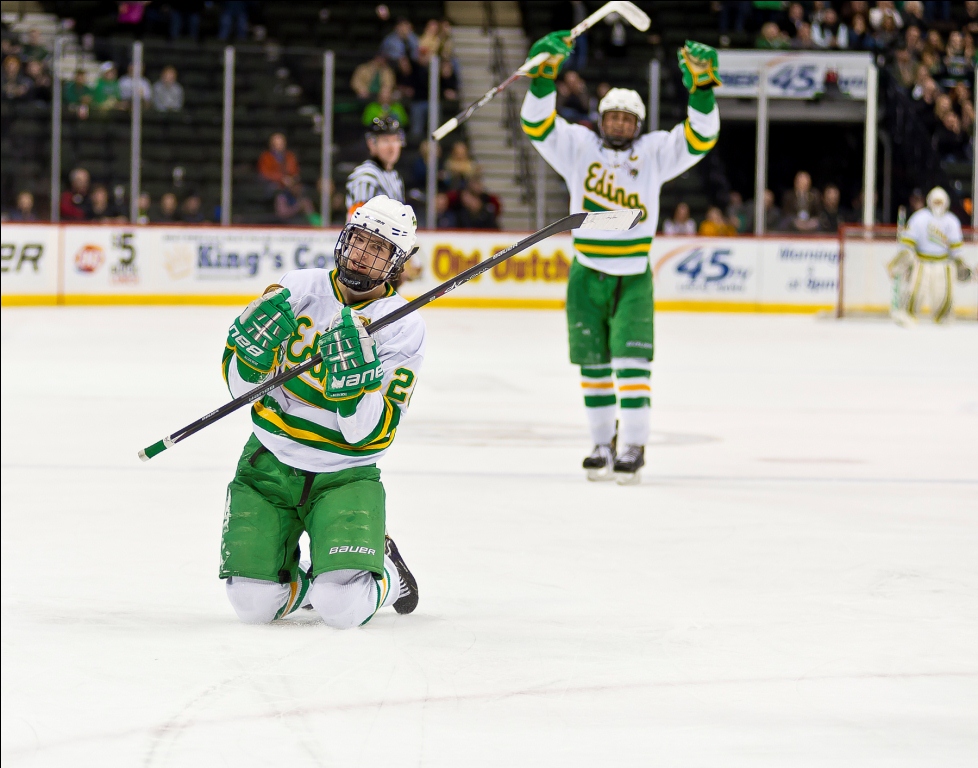 Edina’s Dylan Malmquist has been striking this pose a lot lately and the Hornets have their sites on a third straight state championship. (MHM Photo / Tim Kolehmainen)

Battle for position heating up as season winds down

Two weeks remain in the season and for the first time, the top ten is starting to take shape with teams finding consistency with some separation, at a least among the top five teams. This week, the top three teams remained unchanged with Blaine and Elk River/Zimmerman swapping the fourth and fifth slot. There are a number of high level games this week with sectional and conference implications on the line.

The Lakeville North Panthers dispatched a pair of South Suburban Conference teams by a combined 14-2 score last week. Over their last nine games, they have outscored their opponents 51-10 that includes four shutouts. The Panthers have blanked seven opponents this year and are proving that not only are they offensively talented, another area of strength is defensively and in goal. Games with Prior Lake and Eagan are on the schedule this week for the Lakeville North. Prior Lake is 14-6-1 this year and in second place 7 points behind the Panthers. A game between Prior Lake and Lakeville North earlier in the year resulted in an 11-goal affair won by the Panthers 7-4. The rematch will be played Thursday night at Dakotah Ice Center in Prior Lake and could be more of a defensive tussle as the playoffs loom.

The Hornets are in playoff form and were terrific in all four phases of the game. Offensively they are clicking averaging 6.3 goals scored per game against a slew of top ten teams. The Hornet power play is always a slow starter and at this point of the year it is churning at 25 percent, a number that should be concerning to playoff foes. Kobi Boe has been stellar in goal this year posting a stingy 1.85 goals against average with four shutouts. Two road games will be challenging for the Hornets with a date on Thursday at Wayzata on the big sheet. Following that contest is a game in the dreaded Hopkins Pavilion, a place Lake Conference teams have come to loathe and the Hopkins Royals have come to crave. The way the Hornets are playing offensively, defensively, in goal, and on special teams should prove to be difficult to beat the rest of the way for any team in any circumstance.

The Cadets did have a patch of two losses in three games but have rebounded nicely. Despite losing to Hill-Murray on Hockey Day in the elements in overtime, the body of work that consists of just two losses propels them ahead of the Pioneers who enter the week with six losses and that is too many to elevate past the Cadets. The showdown Section 3AA win over Cretin-Derham Hall was impressive and the Cadets got right back to work and finished a good team in Tartan by a score of 5-1. There is no such thing as coasting to the finish over the next two weeks when the Cadets face-off against Mahtomedi (18-2-2 and a 4-0 win over Hill-Murray), Hill Murray (15-6-0 and a loss against the Pioneers), Breck (17-6-0), and the always tough to play Holy Family Catholic Fire (12-6-2). Will the Cadets soar to the playoffs or limp in at the close of this season? The next two weeks will deliver a better picture.

The Bengals are 8-0-1 in their last nine games and have marquee wins over Hill-Murray (4-3), Eden Prairie (8-3), Elk River (6-4), and Benilde-St. Margaret’s (5-2). That is solid resume and the Bengals are finding their groove. Blaine leap-frogged the Elk River Elks for the fourth spot after earning a split with them during the season. The number of high level wins for the Bengals pits them a notch ahead of the Elks in this week’s MNHockeyMag.com top ten.

The Elk River/Zimmerman Elks were in a playoff style battle with their Section 7AA rival Duluth East last Saturday and it ended in a 1-1 tie, solving nothing and leaving the door open for a potential bone jarring section match-up if the two teams end up crossing paths this year in the playoffs. For the Elks, they have run away with the Northwest Suburban North Conference. Over the long haul, the Elks are 3-4-1 among teams that have been ranked in the top ten of the MNHockeyMag.com top ten this year. They have chewed up opponents they are expected to, yet are under .500 against teams in the top ten. A few more high-end wins would put this already terrific hockey team in the elite level of teams.

It was a huge win over the White Bear Lake Bears for the Hill-Murray Pioneers that positions them as a front runner for the top seed in the Section 4AA. With the level of talent that is teed up in the section, the higher the seed, the better. Hill-Murray has won two straight since their 4-0 loss to Mahtomedi. It set the table for a potential winner-take-all show down with St. Thomas Academy for the Metro East Conference title this week, provided the teams run the table and take care of business the final two weeks in their other games. The Pioneers are 4-5-0 against teams that have been ranked in the top ten of the MNHockeyMag.com in the Class 2A. Like Elk River, the Pioneers have been great against the teams they are expected to beat and good enough against the top teams. They are always a factor come playoff time and as well, are a couple of marquee wins away from the elite level of teams in the state.

A key Section 4AA win over Stillwater last week was followed up with a tough 2-1 section loss to the Hill-Murray Pioneers. Either way, it has been an impressive year for the Bears who are in striking distance of their 19th state tournament appearance and first since 2011. Like many in the mid-section of the top ten, the Bears are under .500 against teams that have been ranked in the top ten of the MNHockeyMag Class 2A rankings this season. None of that matters as it comes down to the Bears, Pioneers, Ponies and Roseville. Those teams better watch out for Tartan and Mounds View in their competitive section this year. The Bears could very well be standing on top when it is all said and done.

Prior Lake is on a six-game winning streak and has outscored its opponents 33-9 during that span. The Lakers have locked up the second seed in the Section 2AA which has Edina locked at the top spot. Prior Lake has long been the rising team in multiple sports over the years. Each season it is incremental to sustained success and the Lakers have taken strides on the rink to become a consistent top ten team. They have two difficult games this week with undefeated and number one ranked Lakeville North and the explosive Farmington Tigers. The Lakers are 4-3 against teams in the top ten this year but have not taken down anyone in the top five this year. They will have their chance this week on Thursday when they host Lakeville North.

While losing to the Edina Hornets 5-0, the Eagles played a solid hockey game to the final buzzer last Thursday. The Eagles rebounded with a 3-1 win over the Wayzata Trojans two days later to earn a split with them in Lake Conference action this year. A pair of games with Section 6AA implications are on deck for the Eagles this week where they look to avenge a pair of losses, the first a 2-1 loss at the hands of Benilde-St. Margaret’s and the second, a 4-2 loss to Minnetonka earlier this year. Not one team has seized control of Section 6AA and a pair of wins will help make a case for the Eagles holding down the top spot. Then again, it may not matter as all seven teams in that section have proven they can beat each other at any time this year. The Eagles have won three of four and appear to be turning the corner to the level of play they expect for a post season run.

The Lumberjacks have fired off four straight wins since their back-to-back losses to the East Grand Forks Green Wave and Hermantown Hawks. They are on pace for a 20 win season and would join just a handful of teams in the Class 2A that can stake claim to that. So far, there is just one in Lakeville North. Edina and St. Thomas Academy are on pace for 20-win seasons and the list beyond that is short.