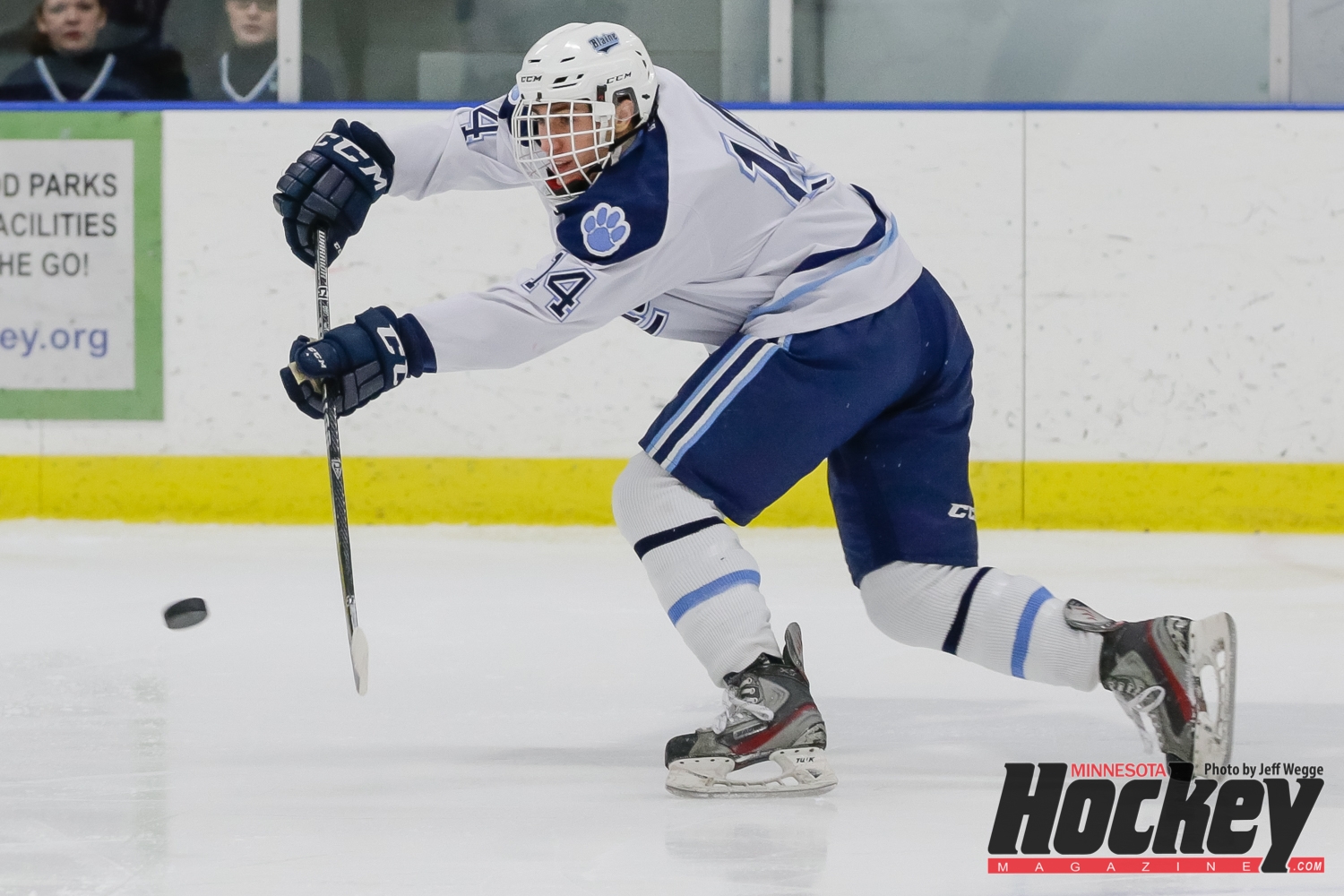 With five points (1 goal, 4 assists) in a 6-2 win over Champlin Park on Monday night, Blaine junior forward Max Bautch (shown here as a sophomore wearing No. 14 before switching to 12 this season) has 11 points (3-8–11) in his last four games helping lift the Bengals into the third spot in this week’s CrankyApe.com Boys Class 2A Top-10. (MHM File Photo / Jeff Wegge)

Week 12 of the CrankyApe.com rankings represents the last week of the regular season.  We will have one more final ranking that will come out next week and then our attention will focus on the sectional and state tournament action.  The Benilde-St. Margaret’s Red Knights still have a zero in the loss column and have not moved from the top spot for weeks.  Stillwater reclaimed the second spot after Holy Family Catholic was tripped up and that opened up a slot for Blaine to move up to No. 3.

There are a number of teams that could be considered for the 8-10 slots this week with Eden Prairie being dropped like it’s hot.  There are legitimate reasons for that yet the Eagles are 0-3-1in their last four games with the 3 losses accounting for half of their season losses.  There could be a number of upsets in sectional play and a potential state tournament field that could be peppered with some variety this year which would be great for the game.

The Red Knights defeated a motivated Eden Prairie team on the road this past week in an entertaining 5-3 game.  After jumping out to a 3-0 lead, the high flying Red Knights held off the Eagles who rallied to pull within one at 4-3 in the third period.  Mr. Hockey finalist Cade Gleekel scored a pair of goals to help lead his team to the win before a packed house.  B-SM also dispatched the Chaska Hawks 5-1 to open the week and remain unbeaten.  The win over Eden Prairie improves the Red Knights record to 7-0-1 against teams that have been in the MNHockeyMag CrankyApe.com Top-10 this season.  Two big sectional games are up next with Wayzata on deck this week and natural rival St. Louis Park each standing in the Red Knight’s way with an unbeaten regular season this year.

The Bengals have climbed back to the third slot this week by turning aside Irondale and Coon Rapids, a pair of teams they are expected to beat.  Featuring two Mr. Hockey finalists in Luke Notermann and Riey Tufte, the Bengals are going to be an issue for a number of teams come sectional time and perhaps beyond.  They have won five straight and are 8-3 against teams that have been ranked in the MNHockeyMag CrankyApe.com Top-10 this year and that is plenty of reason to have them in the elite of the rankings for their body of work by owning the most wins against the fewest losses of top teams this year.

A 10-game winning streak was snapped by the Grand Rapids Thunderhawks this past weekend as the Fire fell by a score of 5-3 in an outdoor game at Grussendorf Park in Grand Rapids on Hockey Day Minnesota.  The night before Holy Family Catholic stopped the Marshall School, Duluth with a 5-0 win at Amsoil Arena.  For the season, Holy Family is now 4-3 against teams ranked among the MNHockeyMag CrankyApe.com Top-10, placing them among a majority of the teams battling it out this year in the top-10 – proving there is incredible balance among a number of teams thus far.

The Skippers are 3-1-1 in their last four and 8-2-1 since Jan. 2.  Moreover, Minnetonka is 3-2-1 against top-10 teams in that span as well.  Wins over Eden Prairie, Edina, and Wayzata were impressive to go along with a tie against  Eden Prairie in their last six games. Their  losses to Wayzata and Benilde-St. Margaret’s are nothing to be ashamed of as  It has been a rough schedule in January for Minnetonka who have promoted their case as a top five team with big wins over the last five weeks.  Minnetonka is 6-5-1 against top-10 teams in the MNHockeyMag.com CrankyApe.com rankings to date.

Which team are the Trojans is the question.  Are they the one that was a convincing 5-1 winner over Edina?  Or, are they the team that lost in convincing fashion to Minnetonka 7-3 – all in the span of one week.  They Trojans have the most losses and fewest wins among the top seven teams this week, yet are 8-5-1 in games against teams that have been in this top-10 at some point this year, tying them with Blaine and Eden Prairie for the most wins in that category.  The belief here is that Wayzata is the team that has won the eight games and they had a six-game winning streak snapped that included wins against Edina (2), Minnetonka, Grand Rapids, and Eden Prairie.  Wayzata will look to hand the B-SM Red Knights their first loss on the season this week and will close out the regular season with a Section 6AA opponent in Hopkins.

One game is on the schedule for Grand Rapids, at Duluth Denfeld, and Trent Klatt’s edition will be preparing for the competitive Section 7AA playoffs.  If the Thunderhawks take care of business against Denfeld and win their first sectional game, this is a 20-win team and when all is said and done that will be a short list of teams this year.  Consider that the Thunderhawks are 11-2-0 since Dec. 29 when they picked up play after the Edina Holiday Classic and have a respectable 4-5-1 against  MNHockeyMag.com CrankyApe.com Top-10 teams this year, they are in the same class as a number other top-10 teams this year.  A head-to-head win by Wayzata is the difference in the Thunderhawks standing in seventh again this week.

The Panthers are 2-3-1 against top ten teams from this year in this ranking system.  They have two additional losses to Section 1AA opponent Farmington by scores of 1-0 and 5-3.  Lakeville North handed Benilde-St. Margaret’s their only tie on the season which is a feather in their cap and are 11-1-0 since Jan. 5 while cleaning house on the South Suburban with the exception being Farmington.  A test in the St. Thomas Academy Cadets opens the weekend with two conference games featuring Eastview and Prior Lake closing out the regular season campaign for the Panthers.

This Week:  vs Thief River Falls

The Lumberjacks have won nine games in a row and are just the second 20-win team this season only to B-SM.  Bemidji has posted a 1-0-1 record among the top-10 teams which fewest such games among the top-1o.  Still, they have scored an impressive 120 goals and have allowed just 46 against this year.  Their two losses have come in overtime to Cloquet-Esko-Carlton (4-3), and Moorhead (3-2).  One final game with Thief River Falls remains for the Lumberjacks.

The Eagles are 0-3-1 in their last four games and are clinging to the top-10 this week.  There is no question Eden Prairie is a top-five team but going 2-4-2 in their last eight games is tough to justify remaining among the top teams.  All of their losses are to top -10 teams in these rankings and they are 8-6-2  for the season against top-10 teams tying them with Blaine and Wayzata for the most wins in that category.  The Eagles are a good team and if they can re-focus their energy on the next 3-4 weeks of hockey can be considered a state title contender still this year.  We have said it before here, there is a reason for the tough patch for this team and  that is understandable.