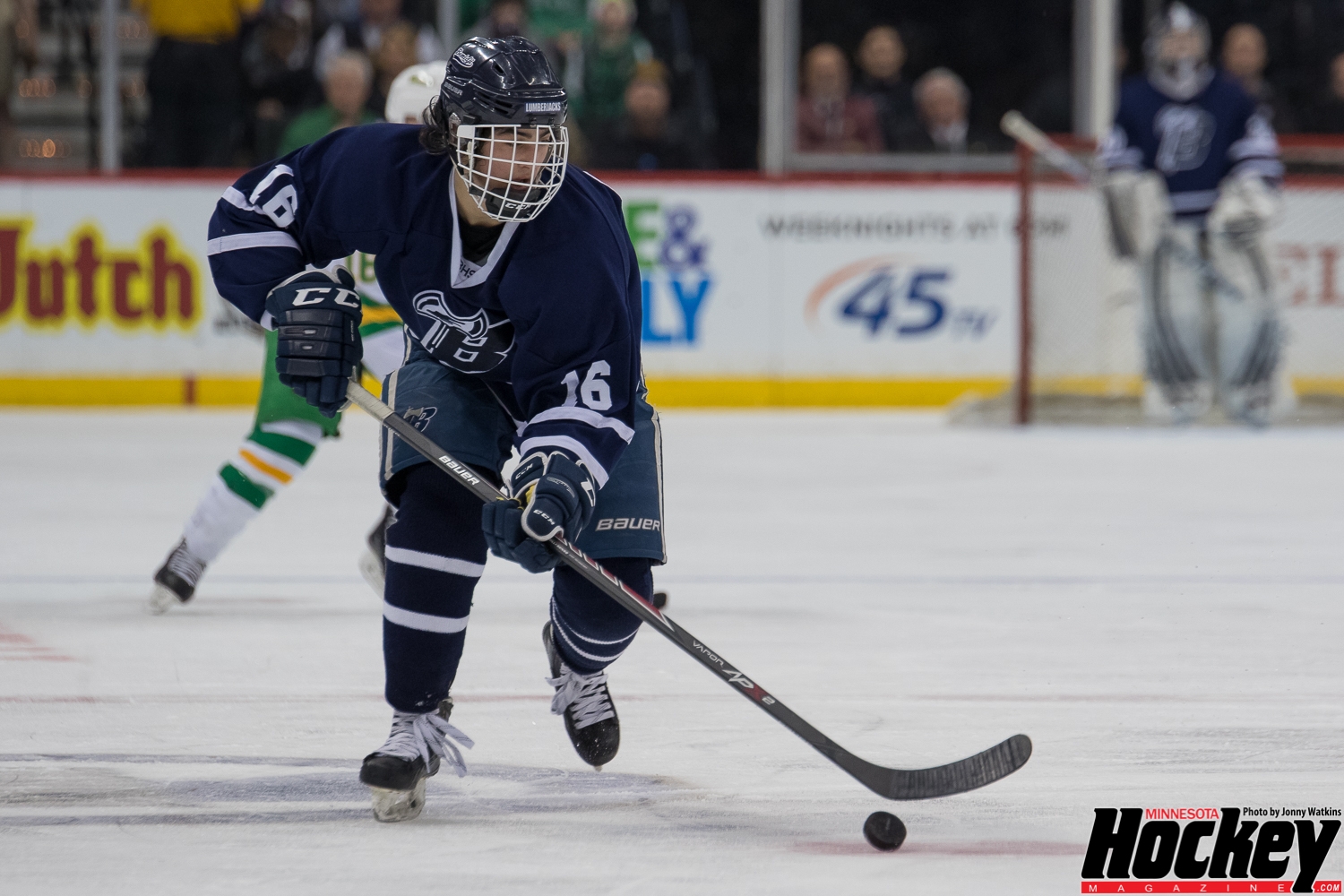 Despite sitting out the season’s first two games, Bemidji senior forward Rocky Copiskey’s 15 points are good for third on an undefeated Lumberjacks team on the rise in this week’s CrankyApe.com Class 2A rankings. (MHM File Photo / Jonathan Watkins)

There are plenty of teams that can be considered in the top ten this week.  Many have posted solid wins yet a number have been defeated as well making for a tricky evaluation process for week six.  The top three teams make it pretty easy on the decision making process with all holding serve and winning all of their games this past week.  Two losses in three games by Blaine and Edina sent them tumbling and the St. Thomas Academy Cadets are surging after a convincing 5-0 win over Wayzata  Edina falls out of the top ten for the first time in recent memory, dating back to the pre-fab five era some eight years ago.  Bemidji catapulted to the fourth slot and have yet to lose this year.

With holiday tournaments slated for the upcoming week, there is certain to be major shakeups in the top ten from week six to week seven.  Happy Holidays to all of our viewers on the MNHockeyMag.com. Thank you for logging on each week and viewing all of our original content and live streaming games.  Your support has been remarkable and appreciated by all at MinnesotaHockeyMagazine.com.

So without further ado, here is a look at this week’s top ten.

The Red Knights have darted to the top spot with a 10-0 record while averaging five goals per game.  Cade Gleekel (10-12-22) and Auggie Moore (8-12-20) pace the Knights offensively.  With quality wins over Grand Rapids (4-3 ot), Hill-Murray (5-1), Eden Prairie (6-5 ot), and Blaine (4-3), the Red Knights own one of the better groups of defensemen in the game right now with Nick Austin (4-9-12) leading the charge. Note that the Red Knights have had to work the extra session capture wins twice and own three one-goal wins as well.  Ken Pauly’s team usually gains confidence as the season wears on and that could be a great formula for the Red Knights as they head into the Sports Authority Holiday Classic at St. Louis Park next week.

It was an impressive Edina Holiday Classic for the Eagles who went 3-0 for the first time in 10 years at the three-game, round robin event.  By the time the third period rolled around in each game, the Eagles were in cruise control as they finished their opponents off.  The Eagles have a big test at Blaine this week before they participate in the Schwan Cup Gold division to open play after Christmas. It is evident the Eagles have two productive lines working right now with Casey Mittelstadt (7-13-20), Michael Graham (8-10-18), Nolan Sullivan (9-9-18) and Cole Lawrence (4-13-17) being key components.  Hunter Johannes has been an effective power forward for the Eagles who have had a great physical presence in all three zones.

The Ponies are a smooth 8-0 on the season and will see competition the likes of Maple Grove and Moorhead.  Their season opening victory over Lakeville North (6-5) is the only ranked opponent the Ponies have played this year and with a deep field at the Holiday Classic they will have a great feel as to how good they are.  Wins over Bloomington Jefferson and Mounds View last week lifted the Ponies record to 8-0 with Luke Manning (9-12-21) tearing it up offensively.  TJ Sagissor (11-7-18) leads his team in goals and Noah Cates (7-11-18) has been equally productive.  The Ponies are handling teams they should be and are outscoring their opponents 46-17 this year.

It is well known the Lumberjacks are a quality defensive team.  They allow just 1.67 goals against per game and have a penalty kill that is shut down at 96 percent.  Add to that a team that scores 4.67 goals per game and the Lumberjacks have handled teams they are expected to and went toe-to-toe with Grand Rapids in an entertaining 1-1 tie early on this year. This is a 23-win team from last year which has the potential to improve on that which says a lot.  Brady Tatro (8-10-18) paces five players that have scored in double digits.  The Hilltopper Classic is next on the schedule for the Lumberjacks.

The next three teams are interchangeable and have taken turns beating each other.  Wayzata gets the nod at five with signature wins over Edina, Hill-Murray, Breck, and Holy Family Catholic.  Their losses have been to Hermantown, Duluth East, and St. Thomas Academy.  The Trojans are playing a tough schedule as usual and had won six straight before being stopped by St. Thomas Academy.  Which way the Trojans go in the top ten next week will be determined by how they perform at the Schwan Cup Gold Division tournament this upcoming week.

The Cadets delivered their most impressive win over the season and in convincing fashion over the Wayzata Trojans by a score of 5-0.  However, losses to Minnetonka and Holy Family Catholic place them in the sixth slot.  It is the nature of the win over Wayzata that helps but the losses and tie to Eastview keep the Cadets in at six this week where they make their top ten debut.  There will be no lack of competition when it comes to the Schwan Cup for the Cadets next week and they will be tested.

It was a quiet week for the Fire and, despite a loss to Wayzata, stay put in the seventh spot.  They have an opening round game against No.3 Stillwater to open the Holiday Classic in St. Louis Park this upcoming week.  Wins over Minnetonka, and St. Thomas Academy are resume type wins that has earned them the respect of our ranking committee and they will look to build on that later in St. Louis Park.

The Bengals have lost two of three games in the past week and tumbled to the eighth slot in the week six rankings.  A one-goal loss to Benilde-St. Margaret’s was followed up by a solid win over Minnetonka.  Then, in North Suburban Conference play, the Bengals were clipped by Anoka.  That is a 17-win Anoka team from last year and a team that can beat anyone on any given night as was proven with the Bengals.  Blaine will face a quality Eden Prairie team this week with White Bear Lake waiting in the wings to close out the 2015 calendar year.

After starting the season 1-2, the Panthers are winners of three straight.  A big 4-3 overtime win against Grand Rapids have propelled the Panthers to a pair 6-0 wins against South Suburban Conference foes.  They have Lakeville South this week to go with the St. Louis Park Holiday Classic.  Their opening round opponent is top ranked Benilde-St. Margaret’s and that alone will prove to be worth the tournament billing.

We really had a tough time finding the No. 10 team in this week’s top ten.  The reason being is we are getting into the teams with 3-4 losses, yet have quality wins as well.  Grand Rapids lost two of three games at the Edina Holiday Classic but was impressive in its win over Edina.  They were equally unimpressive in their loss to Elk/River-Zimmerman who could stake claim to this spot as could Edina and the next seven teams on this list.  What is known about the Thunderhawks is they have high end forwards with solid goaltending and are developing for the long haul.  Wins over Minnetonka and Edina and a tie with Bemidji are enough to keep them in the top ten one more week.  Grand Rapids hosts its own tournament this week at the IRA Civic Center.