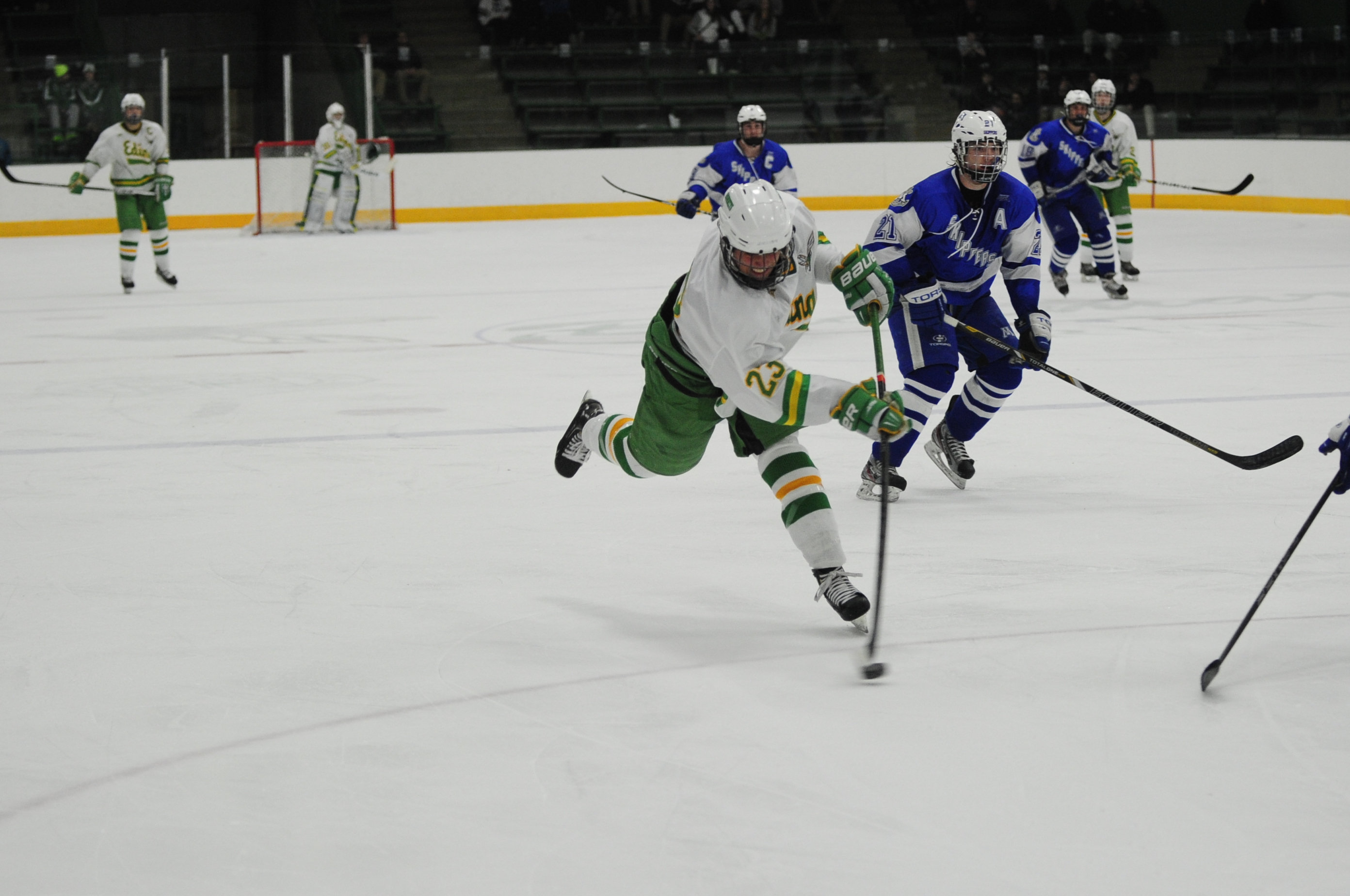 1.  Hill-Murray Pioneers (7-0-0, 4-0-0)  Granted, the Pioneers are cleaning up in the Classic Suburban Conference with four wins and that is something we have all become accustomed to.  The Pioneers shutout South St. Paul 4-0 and defeated North High School 5-3 in a close one last week.  Up next will be a trio of games that will challenge their position in the top slot this week as they open the Schwan’s Cup Gold Division play with Duluth East on Thursday at Ridder Arena.

2.  Blaine Bengals (7-1-0, 4-0-0) After the tough loss to the East Grand Forks Green Wave, the Bengals responded with a resounding two game effort that saw them out-score their opponents 21-0 as they hammered Coon Rapids 11-0 and followed that up with a 10-0 white washing over the Robbinsdale Armstrong Falcons.  The Bengals will line up with a solid group of teams at the St. Louis Park Holiday Classic this week.   Blaine opens with the Maple Grove Crimson at 2:30pm and if they win or lose will face either Eden Prairie or Lakeville North in the semi-finals.

3.  Edina Hornets (7-2-0, 0-0-0)  It was an impressive week for the Edina Hornets who were off  the week before.  Edina jumped right into the frying pan with 3 tough games and delivered three victories which did not hurt their resume.  The three quality wins were over the Grand Rapids Thunderhawks in overtime by a score of 4-3, Elk River/Zimmerman 6-3, and Eden Prairie 4-2 that lifted them to top three status this week.  The Hornets provided a well rounded effort and showed once again that they have depth which will prove to be an issue for most opponents.  Edina opens  Schwan’s Cup Gold Divison play with the #1A Breck Mustangs in the Schwan’s Cup Gold Division.

4.  Eden Prairie Eagles (7-1-0, 0-0-0) The Eagles had their 7 game winning streak snapped by the rival Edina Hornets by a score of 4-1 in the final game of the  the Edina Holiday Classic round robin this past Saturday.  The Eagles defeated Elk River/Zimmerman 3-1 and Grand Rapids 7-4 that set up the big game with neighboring Edina.  The Eagles had 17 minutes of power play time and were held off the scoreboard with the man-advantage in the Edina game that included an extended five-on-three and major penalty.  The Eagles are in the St. Louis Park Holiday Classic and have quarterfinal round action with the Lakeville North Panthers at noon.

5.  St. Thomas Academy Cadets (4-1-1, 1-1-0) The Cadets were idle last week and stay put at #5 in the MHM rankings.  They open Schwan’s Cup Gold Division play with the Burnsville Blaze on Thursday at 5:30pm from Ridder Arena.

6.  Benilde St. Margaret’s Red Knights ( 7-2-1) Scoring goals has not been an issue for the Red Knights as they can put the puck in the net.  Spencer Naas (16g-11a-27pts)  has been lights out this year and scored his 100th career goal against the Moohead Spuds on Friday that resulted in a 9-1 Red Knight victory.  BSM also defeated the Marshall School, Duluth Hilltoppers 4-3 in overtime as Naas had the hat trick and added an assist on the Even Fleming game winner.  They opened the week with a 4-4 tie against Maple Grove and have built their game from there.  An opening round game against the Bloomington Jefferson Jaguars is on deck this week at the St. Louis Park Holiday Classic.  That game can be heard live on Sports Radio 105 The Ticket.

7.  Bunrsville Blaze (6-3-0, 5-1-0) After losing 2 of their first 3 games to start the season,  the Blaze have been on fire.  (Sorry, had to do it).  They have won five straight that includes a pair of shutouts.  Last week Bunrsville handled Apple Valley (8-0) and had and even more impressive 6-2 win over the highly regarded Prior Lake Lakers.  They catapult to the #6 slot.  The Blaze have the #5 St. Thomas Academy Cadets to open the Schwan’s Cup.  Their next three games at the Cup will determine whether they are in the mix or move back down.

8. Bloomington Jefferson Jaguars (6-2-0, 2-1-0)  The Jags responded to adversity quite well last week.  After winning four straight to open the season, they lost two in a row and have rebounded  with a pair of wins over the highly regarded Eastview Lightning (4-1) and followed that up with a 6-1 win over the Apple Valley Eagles.  The Jags head to the St. Louis Park Holiday Classic and will take on the #6 BSM Red Knights in the quarterfinals of that tournament.  Like most teams in that deep pool of competition, plenty will be learned about the Jaguars and where they stand.

9.  Grand Rapids Thunderhawks (6-3-0, 2-0-0)  The Thunderhawks have not been lighting the world on fire and are steadily working their way out of the top ten.  They stay in this prestigious group on the MHM rankings on the strength of their win over the Elk River Elks at the Edina Holiday Classic by a score of 3-2.  Grand Rapids opened the three game set at Edina with a 4-3 overtime loss at the hands of the Edina Hornets.  They followed that up with a 7-4 defeat to the Elk River Elks.  John Rothstein’s Thunderhawks host three games at the IRA Civic Center this week as they open play with Mahtomedia.  St. Francis and Brainerd follow to close out the weekend series.

10.  Elk River Zimmerman Elks (5-3-0, 3-0-0)  The Edina Holiday Classic can be a humbling series of games and the results were not in favor for the Elks.   While they played very well, the result did not benefit them in the win column.   Elk River was topped by the Eden Prairie Eagles (3-1) in the opening game and then defeated by Edina Hornets (6-3), and then lost the big section 7AA match-up with Grand Rapids (3-2).   A non-conference affair with Forest Lake is on the schedule this week on Saturday as they refrain from any tournament type play.