Defending champs move up a notch 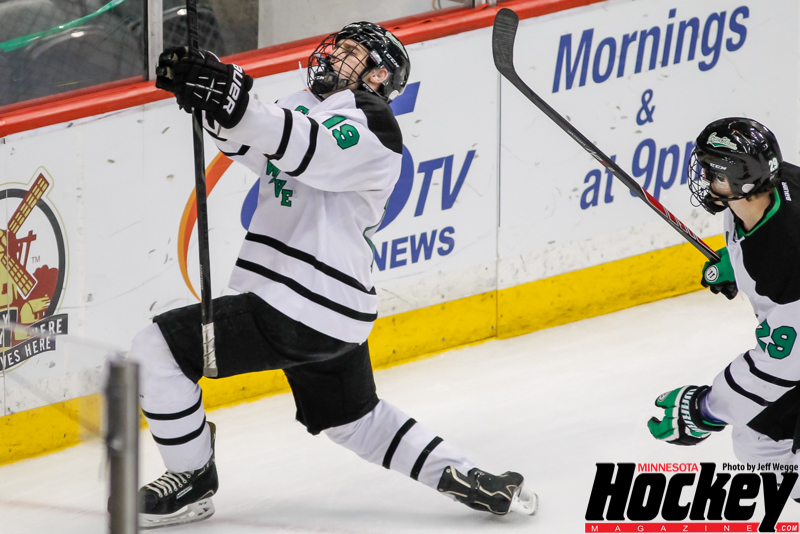 Defending champs move up a notch

When the season began, most observers had a distinct top-three in the Class 1A rankings (defending champion East Grand Forks, five-time runner-up Hermantown, and private school power Breck). Behind that trio is where the rankings diverged, sometimes massively so.

So what to make of an early-season shutout of Breck by Duluth Marshall? A Hermantown loss? With just a week in the books, the rankings are already in turmoil with some teams making big moves up or down.

It’s one of the fun things about ranking teams this early in the season, as there isn’t a huge body of work to base the rankings. We know historically what programs tend to succeed and we know what teams returned from last year’s efforts. But the missing link is how the new players blend in and how the returning players improve.

With that said, it’s tough to overlook what East Grand Forks has done in its bid to repeat as Class 1A champions.

The Green Wave are likely to be a different team than last year. They lost four top defensemen from a stingy defensive team that won the Class 1A state championship. But that doesn’t mean they can’t hoist the trophy again this winter. Because with their top four scorers and goaltender Josh Weber (2-0-0, 2.50, .828) returning, East Grand Forks again looks like the team to beat. Senior Dixon Bowen (8-3-11) is making his case to be included in the Mr. Hockey discussion with a big start to the year. The University of North Dakota commit has scored at least two goals in each of the first three games, including a four-goal outburst at Totino-Grace. Defensively, Nathan Peabody (0-4-4) and Trevor Selk (0-2-2) will log the majority of minutes on the blue line and are capable of replacing last year’s talent.

One loss to a Class 2A top-five team (Wayzata) is enough to knock Hermantown from the top spot in the rankings? Well, it was a tenuous hold over East Grand Forks and with the Green Wave rolling, the flip was inevitable. The Hawks did respond to their one-goal loss to Wayzata with a 4-3 overtime victory over Roseville, another Class 2A program. There’s no shame in a pair of one-goal games to terrific big-school programs for Hermantown. Nate Pionk (3-2-5) continues his growth as a player and leads the Hawks in scoring, while defenseman Eric Gotz (2-1-3) netted the game-winner in overtime against Roseville. One of the questions for coach Bruce Plante was in goal and he’s given the first nod to Luke Olson (1-1-0, 3.46, .821).

Mahtomedi was expected to take a big step up into the favorite’s role in Section 4A and the Zephyrs did nothing to dispel that notion in a 7-5 season-opening victory over Cretin-Derham Hall, one of the favorites in Section 4AA. Mahtomedi shocked the Raiders by opening up a 6-2 lead late in the second period before holding off Cretin’s late charge. Zephyrs power forward Jack Becker (3-0-3) led the way with a hat trick, while Will Swanson (1-0-0, 5.00, .848) stopped 28 of 33 shots in goal. The victory over a Class 2A power was enough to jump the Zephyrs past Breck in the rankings and into the No. 3 position, although they’ll have to tighten up defensively.

New Prague ended last year with a victory over St. Cloud Cathedral (5-2 in the Class 1A state third-place game) and began this winter the same way, beating the Crusaders 6-2 on Nov. 21. The more things change the more they stay the same? Not exactly, as this is a different Trojans team, but one that appears equally as talented. Alex Gregor (2-5-7), Ben Witt (2-3-5), and Zach Davis (3-2-5) have come out on fire offensively and goaltender Conner Wagner (2-0-0, 2.00, .920) is a veteran leader who is capable of standing on his head any given night — and often does. A big game this Thursday against last year’s chief competition in Section 1A (Mankato West) should determine whether New Prague goes on a big winning streak to open the year.

How’s that for a jump in the rankings? Perhaps Duluth Marshall was underrated in the preseason poll, sitting just outside the top-10. After beating Roseville in overtime and shutting out perennial power Breck in the first two games, the Hilltoppers have shown they shouldn’t be taken lightly. Coach Brendan Flaherty graduated his top scorers and lost two others to transfer, but appears to have a stout defensive unit in front of goaltender Alex Murray (2-0-0, 1.40, .951). Allowing just three goals in two games to top teams, signifies the ‘Toppers as contenders in Section 7A. Rugged and hard-hitting defenseman Jordan Fralich (0-3-3) leads the team in scoring with Peter Lenz (1-2-3) and Lane Krenzen (2-1-3).

And the walls came tumbling down? Not exactly, although Breck coach Les Larson can’t be happy with his team’s 2-0 shutout loss at Duluth Marshall last Saturday. But the Mustangs took care of business in the more important game of the opening week, defeating Section 2A rival Delano, 6-1 behind six individual goal scorers and a three-assist effort from junior Chase Ellingson (0-3-3). Grant Parrish (1-2-3) also had three points in the victory to tie Ellingson for the team lead after two games. Breck can forget about the loss to Marshall with a big schedule this week that includes a trip to the northwest corner of the state to face top-ranked East Grand Forks and Thief River Falls. New goaltender Stephen Headrick (1-1-0, 1.50, .932) will have to continue his excellent early-season play taking over for graduated Henry Johnson.

This isn’t the same Warroad team as last year, not with the departure of two-thirds of the record-setting line of Kobe Roth (2-1-3), Jared Bethune, and Kyle Sylvester, each of whom tallied more than 90 points last year. Roth is still around and scored twice in a season-opening win over Mound-Westonka, but the Warriors only scored three goals each in their first two games. The offense may not be as explosive as last year, but Warroad should be very good defensively with veteran goalie Alex Burke (2-0-0, 1.00, .946) supported by highly-regarded defensemen such as Luke Jaycox (1-1-2) and Jade Cole (0-2-2). They’ll have to be, as it looks like the days of 7-6 shootouts may be over for now.

Luverne is a team that picked up offensively where it left off last year, pouring in 18 goals in winning its first two games. As expected, the offensive fireworks were led by junior Chaz Smedsrud (5-9-14) and freshman Jaxon Nelson (6-5-11), who is ranked by some outlets as the top 2000-born player in the nation. Smedsrud followed up last year’s 89-point campaign with back-to-back seven point games to start this season (3-4-7 at Waseca and 2-5-7 against the Bulldogs). The offensive show should continue this week, although a road trip to St. Paul Academy on Saturday should help settle a few rankings debates. Connor Crabtree (2-0-0, 2.00, .897) backed up Kendall Meyer last year, but has the job to himself in goal this winter.

Two home losses to start the season have the Crusaders in danger of tumbling out of the rankings. The fact that both came at the hands of teams ranked higher (No. 1 East Grand Forks and No. 4 New Prague) is something for coach Eric Johnson and crew to hang their hats on, but it may not be enough. Now the Crusaders head to No. 3 Mahtomedi this Tuesday in danger of going 0-3-0. Logan Neu (1-3-4) leads the team in scoring, but only four players have a point and no one has more than one goal. Expect Cathedral to turn it around soon, but it looks like a rough start.

Want to play the association game? St. Paul Academy beat St. Cloud Tech by five goals last week, the same Tech team that upset Roseau, which was beaten by Blaine — a team hovering on the edge of the Class 2A rankings. So does that mean the Spartans are a top-10 team regardless of class? Maybe not, but they could be soon. We’ll get a great feel for the Spartans’ true power this week, as they play two teams ranked ahead of them in the Class 1A poll (at No. 3 Mahtomedi and against No. 8 Luverne). Matt Dahlseide (5-8-13), Jack Johnston (7-3-10) and Dev McCabe (1-9-10) have been huge to open the season.