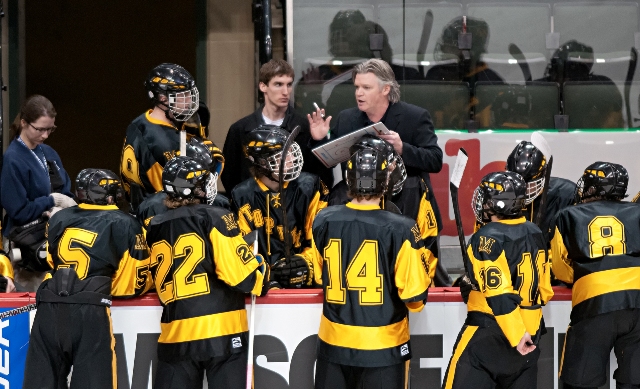 Duluth Marshall coach Brendan Flaherty has the Hilltoppers up to the third spot in this week’s Minnesota Hockey Magazine rankings. (Photo / Tim Kolehmainen)

It was another big week of shifting around in Minnesota Hockey Magazine’s Class 1A top 10 rankings, as the top teams haven’t been afraid to schedule one another. Mahtomedi, Duluth Marshall and Warroad continued their unbeaten streaks and rose up in the rankings, while Hermantown and Breck suffered losses that knocked them down a few pegs.

Although East Grand Forks also lost (to North Dakota power Grand Forks Red River) it wasn’t enough to take the Green Wave out of the top spot. Virtually everyone else saw some movement, however, as we approach holiday tournament season.

This week: vs. Crookston (Tue)

What to make of last week’s 5-0 shutout loss to Grand Forks Red River (ND)? It’s tough to say, until we get more clarification on just how good one of North Dakota’s top programs is in comparison. What we do know is that East Grand Forks bounced back nicely with a 4-1 defeat of Breck, which is considered one of the top teams in Class 1A. Dixon Bowen (10-8-18) continued his hot play with a goal and an assist in the game and is tied for third in the state in scoring (behind Luverne’s Chaz Smedsrud with 23 points). The North Dakota commit powers the potent Green Wave offense and is a true leader.

This week: at Breck (Tue), at Chanhassen (Thu)

Mahtomedi followed up its impressive victory over Cretin-Derham Hall in the opener with a pair of thumpings of strong Class 1A teams, beating St. Cloud Cathedral and St. Paul Academy by a combined 10-2 score. The Zephyrs are as deep as any team in Class 1A, with scoring prowess balanced across the top three lines. Ten different players have already netted a goal, led by three each from Jack Becker (3-1-4) and Jack Heinsch (3-0-3). The Zephyrs rose a spot this week with Hemantown’s loss to Hopkins and have a big game coming up Tuesday at Breck.

This week: at Grand Rapids (Fri), at International Falls (Sat)

The Hilltoppers continued their climb up the Class 1A rankings, rising another two spots to No. 3 after a perfect week that included home victories against two teams knocking on the top-10 (Blake and Orono) by a combined 9-1 score. The ‘Toppers and goaltender Alex Murray (4-0-0, 0.96, .959) have been a nightmare to create offense against, as they’ve already posted two shutouts and a total of seven goals allowed in five games. Marshall has played all five of its games at home, though. It’ll be less comfortable traveling up to the far edges of the Iron Range (and beyond) twice this week.

It’s tough to knock Hermantown too much for two losses in the first five games. The Hawks twice have fallen to good Class 2A teams by a single-goal (4-3 at Wayzata on Nov. 28 and 2-1 in overtime to Hopkins last Saturday), but they did outshoot Hopkins by a wide 56-27 margin. Until being stymied by Josh Kuehmichel and the Royals, scoring goals hadn’t been a problem for coach Bruce Plante’s team — and won’t be much of the season. Hermantown will put the puck in the net, led by veterans Ryan Kero (3-8-11) and Nate Pionk (7-4-11).

The Warriors are another team that continues to just win — and consequently rises in the rankings. Warroad posted another three victories last week, highlighted by a 3-2 win at previously unbeaten Grand Rapids last Saturday. Kobe Roth (5-3-8) lost his two record-setting linemates from last year, but Beau Wilmer (4-2-6) has made a nice impact early. The Warriors won’t be the same high-scoring bunch as last year, but a strong defense in front of goaltender Alex Burke (5-0-0, 1.00, .953) will keep Warroad winning plenty of games.

New Prague put an exclamation point on the early Section 1A race with a 6-0 shutout of Mankato West last Thursday. Veteran goaltender Conner Wagner (4-0-0, 1.50, .935) stopped all 28 shots he faced and leading scorer Alex Gregor (6-5-11) tallied two goals as the Trojans romped in the rematch of last year’s section championship game. Next comes a game against the Trojans’ other main rival in Section 1A, Rochester Lourdes, on Thursday in New Prague. The Trojans dropped two spots in the rankings, but due to no fault of their own.

This week: at Mahtomedi (Tue), at Chanhassen (Thu)

Honestly, Breck is likely better than the No. 7 ranking in Class 1A, but a pair of losses to East Grand Forks and Duluth Marshall in which the Mustangs scored a combined total of one goal makes it hard to put them much higher. That said, don’t be surprised to see Breck rise back up, particularly if coach Les Larson’s team can knock off Mahtomedi this Tuesday night. Breck scored 13 goals in two victories, but has just three goals in its other three games, led by Chase Ellingson (3-4-7), Will Blake (3-3-6), Tyler Scott (2-4-6) and Austin Heidemann (3-1-4).

This week: no games

The Spartans split a pair of games in a big statement week for the program, losing to Mahtomedi (3-1) and handing Luverne its first regular-season loss since the 2012-13 season (5-2). It was a nice effort for coach Bill Owens’ team, which is young and rising fast. Sophomores Matt Dahlseide (5-12-17) and Jack Johnston (8-2-10) continued their blistering scoring pace, each scoring a goal last week, while sophomore Will Kelly (2-1-3) tallied his first two goals of the season against Luverne. Yes, that’s three sophomores — and don’t forget about high-scoring freshman Dev McCabe (2-8-10).

Welcome to the only new team in the top 10 rankings this week, as Duluth Denfeld has won three straight games since a season-opening loss at Bloomington Jefferson. The Hunters opened some eyes with a 3-1 home win over Eagan last Saturday, impressive even though the Wildcats are quite young after graduating most of their team coming off a state tournament berth in Class 2A. The Hunters are a rugged bunch, as evidenced by their leading scorers Dylan Michaud (1-4-5), Nick Thompson (2-2-4) and Cameron McClure (0-2-2), all of whom are strong and can throw their weight around.

The Cardinals hang onto the top 10 by their fingernails after losing one of their key Class 1A battles last week, 5-2 at St. Paul Academy on Saturday. Over the last few years, Luverne has had to answer questions about its schedule strength and losing to one of the few top-20 caliber programs on their schedule this winter could start the chirping again. With junior Chaz Smedsrud (10-13-23) and freshman Jaxon Nelson (8-10-18) among the top scorers in their respective classes, Luverne will score against the other southwestern programs, but the next “big” game will come Dec. 23 when Totino-Grace travels to Luverne.