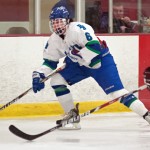 Just over a week into the season, and there has already been a shake up in the Class 1A rankings. Not at the top, where the top four positions remain the same, but in the back of the rankings, where Delano/Rockford and Blake leaped into the fray with impressive early results. Delano/Rockford’s only loss on the season is to No. 2 Breck, while Blake fell only to the Tigers in the season-opener and just completed a tough road trip to the northwest with a pair of victories.
But it will be difficult to break through against No. 1 East Grand Forks — which has yet to allow a goal in two games — No. 2 Breck and No. 3 Hermantown, the four-time state runners up.

1. East Grand Forks (2-0-0)
Last week: vs. Park Rapids (5-0 W), vs. Totino-Grace (4-0 W)
This week: vs. Grand Forks Central (12/3), at Grand Forks Red River (12/7)
As expected, defense led the way for the Green Wave in the opening week of the season. In a pair of games, East Grand Forks posted shutouts in each, outscoring Park Rapids and Totino-Grace by a combined 9-0. With all six returning defenseman from last year’s state tournament team, the Green Wave are proving to be very difficult to solve in their own zone. Park Rapids managed just five shots on Garrett Lieberg and Totino-Grace had just 12 shots on Josh Weber. Both goaltenders saw limited time last year and are dueling to take over the main job from graduated Tanner Lindstrom. Grant Loven had a goal in each game, as seven other players tallied one goal in a balanced attack.

2. Breck (2-0-1)
Last week: at Mahtomedi (6-1 W), at Delano (7-4 W), at Holy Family (2-2 T)
This week: at Providence Academy (12/3), vs. Thief River Falls (12/7)
Breck coach Les Larson always challenges his teams with tough schedules and it was no different in the opening week of the season this winter. The Mustangs responded with two wins over top-10 caliber Class 1A teams and a tie against high-powered Holy Family Catholic. As expected, senior goaltender Henry Johnson played all three games — and played well — stopping 90 of 97 shots, including a big 38-save effort against Holy Family. The Mustangs lost several key veterans to graduation, but Chase Ellingson and Michael Orke have come out of the gate on fire and been joined by sophomore Will Blake, who had two-goal games against both Mahtomedi and Delano. The trio already had 10 goals in three games.

3. Hermantown (1-1-0)
Last week: vs. Wayzata (1-6 L), vs. Princeton (6-2 W)
This week: at Hopkins (12/6), at Orono (12/7)
Hermantown recovered from a season-opening humbling against Class 2A power Wayzata by racing past a strong Princeton program, 6-2.  Six different Hawks scored against the Tigers, led by Ryan Kero’s three-point night (one goal, two assists). Hermantown must get that kind of balance this season with the younger players stepping up to the varsity level for coach Bruce Plante. Jace Thomas got the start in goal against Princeton, making 26 saves, but is nominally the backup behind returning All-Stater Adam Smith. The Hawks are still meshing as the newcomers — and Hibbing transfer Eric Gotz — get acclimated to the program, but Hermantown is an annual contender for a good reason: talent and great coaching.

4. Warroad (2-0-0)
Last week: at Mound-Westonka (8-0 W), at Detroit Lakes (5-1 W)
This week: vs. Lake of the Woods (12/3), vs. Virginia (12/6), vs. Grand Rapids (12/7)
One factor argued against a high ranking for Warroad is the top-heavy nature of the Warriors’ attack. True, but when that top line is humming, the Warriors are going to be very difficult to beat. The top trio of Kobe Roth, Jared Bethune and Kyle Sylvester combined for 10 goals and 26 points in a pair of big victories to open the year. Bethune used his rugged physical skills to notch a hat trick in each game. But perhaps the true key to Warroad’s season will come in its own zone, where strong defensemen such as Nick Jaycox, Luke Jaycox and tough-as-nails Blayke Nelson will be supporing new goaltender Alex Burke. Burke has been solid so far, stopping 35-of-36 shots in two games.

5. Delano/Rockford (2-1-0)
Last week: vs. Blake (4-0 W), at Providence Academy (5-0 W), vs. Breck (4-7 L)
This week: at Chanhassen (12/5)
The Tigers were unranked in the preseason poll, but impressed in an opening week that saw them shut out Blake and Providence Academy and lose a high-scoring game to No. 2 ranked Breck. Tyler Rizzardi made 53 saves to win his first two starts in goal — both in shutouts — as the Tigers played tough defensively. Then came a contrasting style, as the game against Breck devolved into firewagon hockey with a combined 11 goals scored. Which style is Delano going to play? That’s to be seen. Justin Oja, Grant Prinsen and Adam Eskola each have two goals scored through three games.

6. Blake (2-1-0)
Last week: at Delano (0-4 L) at Thief River Falls (3-1 W), at Crookston (9-2 W) This week: at Totino-Grace (12/5), vs. Duluth Marshall (12/7)
After a tough shutout loss at Delano to open the season, Blake rebounded with an impressive northwestern trip with big wins at Thief River Falls and Crookston. Those results jumped the Bears way up in the rankings after they had been unranked in the preseason. It could be that the young Bears have learned how to win after they struggled through a tough winter last year. Many of the key Bears’ forwards, such as Cade Gleekel, Coleman Dressen, Mark Lyman and Johnny Ferguson, returned this year with a chip on their shoulder. Just a sophomore, Gleekel leads the team with three goals and five points.

7. Mankato West (0-0-0)
Last week: none
This week: vs. Mankato East (12/3), vs. Austin (12/5), vs. Winona (12/7)
Nothing new for Mankato West, which hangs onto the No. 7 spot and has yet to play a game. The Scarlets are one of the last teams in the state to play, as they open Tuesday against crosstown rival Mankato East. The early schedule isn’t particularly challenging, but with a veteran team for coach Curtis Doell, West should come out flying. As in the Scarlets’ last trip to state (2008), this year’s team is high-scoring and potent up front, anchored by 38-goal scorer Derek Frentz.

8. Totino-Grace (1-1-0)
Last week: at East Grand Forks (0-4 L), at Thief River Falls (3-1 W)
This week: vs. Blake (12/5), at Holy Angels (12/7)
It was a good news/bad news trip to the northwest corner of the state for Totino-Grace. The Eagles managed to earn a split, beating Thief River Falls but losing to top-ranked East Grand Forks on each team’s home ice. That’s the good news. The bad news is that the Eagles sputtered on offense, scoring just three goals in the two games. After getting just 12 shots at East Grand Forks, the Eagles did pump 28 on the Thief River Falls goal, netting three in the second period. Kai Barber is the only player with more than one point. With graduation and transfers robbing the Eagles of much of its goal-scoring from last winter, it could be a season-long effort to develop more scorers for coach Mark Loahr.

9. Thief River Falls (1-2-0)
Last week: vs. Roseau (3-0 W), vs. Blake (1-3 L), vs. Totino-Grace (1-3 L)
This week: at Tartan (12/6), at Breck (12/7)
The Prowlers looked like world-beaters after they shut out powerful Roseau on opening night, but spiraled downwards against a couple of Twin Cities private schools over the weekend, falling by identical 3-1 scores to Blake and Totino-Grace. Both schools jumped Thief River Falls in the rankings and put the Prowlers in danger of falling out of the top-10. The schedule doesn’t get any easier for coach Tim Bergland and crew, as a trip to the Twin Cities this weekend sees games against Class 2A Tartan and second-ranked Breck. The Prowlers must find scoring outside of Isak Bergland, who has three of the team’s five goals. Tanner Holmes is a great comfort in goal, as he’s stopped 86 of 92 shots in playing every minute so far.

10. St. Cloud Cathedral (2-0-0)
Last week: vs. Duluth Denfeld (3-2 W), at Fergus Falls (3-1 W)
This week: at New Prague (12/3), vs. Rochester Lourdes (12/7)
So much for starting out slowly with a young and inexperienced team. Despite a lineup peppered with varsity newcomers, coach Eric Johnson and the Crusaders battled past a pair of Class 1A teams in tight games. Perhaps not surprisingly, it was the few returning veterans who led the way, as Will Hammer had four assists and Matt Fritz and Dan Bailey combined for five points. Zach Fritz has also been strong in goal in his first two games, making 30 saves on 33 shots. As Cathedral’s youngsters gain experience, the results could be even more impressive. This week the Crusaders get a couple of other young Class 1A teams on the schedule in New Prague and Rochester Lourdes.