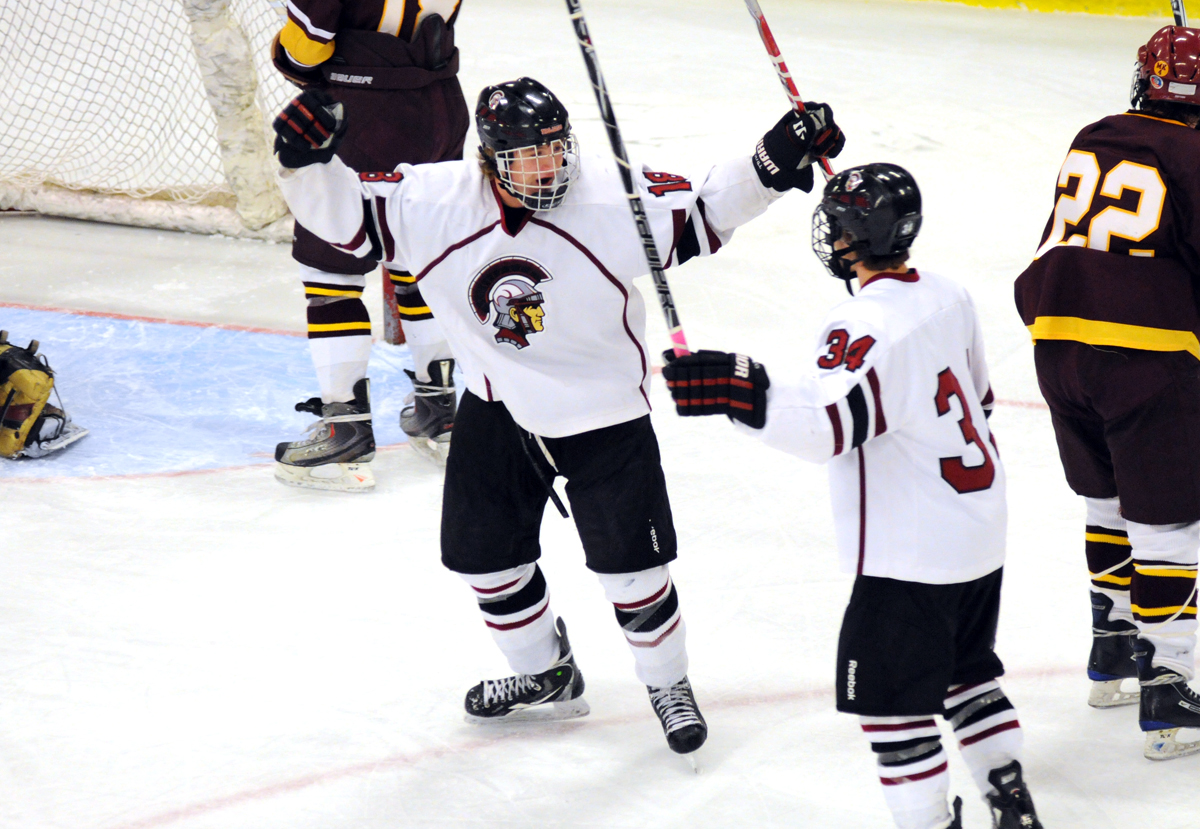 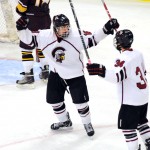 The deeper we go into the high school hockey season, the more stable the top 10 in Class 1A has become. As they have much of the winter, the top four remained frozen in those spots, led by top-ranked Breck. The Mustangs were idle last week, but the three squads immediately behind (East Grand Forks, Hermantown and Warroad) went a combined 5-0-0 in relatively easy fashion.

Coming out of the holiday season, the biggest gift was received by New Prague, which moved all the way up to the No. 5 spot after defeating Section 1A rival Mankato West.

Breck remained atop the rankings while idle last week. The Mustangs will be happy to get back to a busy week of three games after nothing but practices under coach Les Larson since the holidays. As if Breck needed much fine-tuning. The last three Class 1A opponents on its schedule (East Grand Forks, Thief River Falls and Rochester Lourdes) have lost by a combined 27-0 score.  Breck’s only two losses came over the holidays against Class 2A powers Edina and Duluth East. It will be tough to knock off the Mustangs, as they are disciplined and tough under Larson — as is usually the case. Senior Henry Johnson (7-2-1, 2.25, .914) is strong in goal and gives the team plenty of confidence.

At just 1.38 goals per game against, East Grand Forks remains one of the stingiest Class 1A teams. That form held last week in a single game against St. Cloud Cathedral, as the Green Wave held the top-10 ranked Crusaders to just 13 shots on goal and a single goal. The defensive corps is experienced and talented from top to bottom, something no other Class 1A team can boast. It starts with the all-around game of Colton Poolman, the fleet skating of Tye Ausmus, the ruggedness of Eddie Eades and on down the line. There are no weak spots in the Green Wave’s defensive zone. If coach Tyler Palmiscno gets offensive contributions from his forwards, East Grand Forks will be tough to beat.

Hermantown picked up a couple of big victories for section seeding, easily defeating chief rival Duluth Marshall and perennial contender International Falls by a combined 16-2 score. The Hawks are new to Section 7A, but they have stamped themselves as the early favorite. Marshall is the defending section champion. Nate Pionk (11-13-24) and Ryan Kero (11-12-23) continue to lead the way offensively, although senior Scott Wasbotten (8-11-19) had seven points in the two victories last week and is coming on. Hermantown coach Bruce Plante and his Hawks could easily find themselves in a fifth straight Class 1A state championship game at season’s end.

The best line in Class 1A — and potentially the entire state — continues to roll along for Warroad. Juniors Jared Bethune (21-32-53) and Kobe Roth (24-28-52) and senior Kyle Sylvester (18-30-48) are the top three scorers in the state entering the week. Yes, among ALL players. They’ve led the Warriors on an eight-game unbeaten streak (7-0-1) and will be counted to continue that prowess. Because beyond the big three, there isn’t much scoring going on in Warroad. They’ve combined for 63 of the team’s 82 goals this season. So far that top-heavy nature hasn’t hurt the Warriors, but it could. The biannual Roseau-Warroad rivalry kicks off this week, a game that doesn’t matter in the section seeding anymore, but features plenty of bragging rights.

The Trojans made the biggest jump in the rankings this week after defeating the previously fifth-ranked Mankato West Scarlets, 2-1. Last week, New Prague was hovering on the edge of the rankings in the No. 9 spot. Now, it’s settled in quite nicely behind the big four — and in the driver’s seat in the Section 1A seeding race for now. Trailing 1-0 midway through the second period against West, Austin Kilian (11-7-18) tied the score and Casey Busch (4-7-11) netted the game winner with just 30 seconds remaining. The Trojans won’t put up big goal totals (Kilian is the only player with more than eight), but they are a tight-checking and tough team.

West dropped a spot in the rankings after losing its only game of the week to Section 1A rival New Prague, 2-1 on a goal with 30 seconds remaining. The Scarlets’ vaunted offense fell short against the Trojans, but on average scores 6.15 goals per game. A dozen players have at least three goals already, paced by Derek Frentz (13-21-34) and Nick Campbell (12-13-25). But there are questions about the power of West’s schedule, which could hurt them in the rankings. This week, coach Curtis Doell leads his team against a gauntlet of Rochester programs: Lourdes on Tuesday, Mayo on Thursday and Century on Saturday.

No doubts exist about the Hilltoppers’ schedule, although they’ve been up-and-down while trying to get everyone back from injuries. The five losses are all forgivable, as they’ve come against the likes of St. Thomas Academy, Benilde-St. Margaret’s, Hermantown, Superior (WI) and a bit of a head-scratcher to St. Cloud Apollo way back in November. A 6-2 loss to Hermantown last week leaves little doubt that the Hawks are the current favorite in Section 7A, but Marshall won’t give up the crown easily. Luke Pavelich (11-8-19) leads the young team in scoring.

All they do is win. And yet the Cardinals still are looking for respect in most state rankings. We’ve bumped them up one more spot to No. 8 on the heels of another two close victories last week, beating rival Marshall in a shutout and then edging Dodge County by a single goal. Not impressive necessarily, but still wins to keep Luverne is the only undefeated team in the state. It likely will be tough to compare Luverne to the other ranked teams the rest of the way, as they get into the meat of their weaker conference schedule. Freshman Chaz Smedsrud (21-26-47) and eighth-grader Jaxon Nelson (18-21-39) continue to pace the offense, but Luverne is at least two lines deep.

Orono was also idle last week, which could be the reason for a one-spot drop in the rankings. Out of sight, out of mind? That shouldn’t be the case for the Spartans, who posted two shutouts in their previous two games and have a good one-goal loss to Hermantown already on their resume. Orono doesn’t have the offensive firepower of some of the other top teams — Jacob Flemmer (8-5-13) leads the Spartans in both goals and points — but they are tight defensively. Goaltender Jonathan Flakne (7-3-0, 1.20, .944) also has some of the best numbers on the state and will be recognized should he keep up his pace.

Back to back losses up north to East Grand Forks and Warroad nearly knocked the Crusaders from the rankings. But then again, Cathedral was not favored in either one, so a pair of tight losses certainly is respectable. Coach Eric Johnson continues to have his young team play it close to the vest, scoring just 3.46 goals per game but allowing only 1.92. Veteran Will Hammer (7-14-21) leads the team in points, while Brady Johnston (7-2-9) is the top goal scorer. As the young Crusaders figure out the varsity game — and if they aren’t intimidated by the January schedule — they could be very dangerous come playoff time.