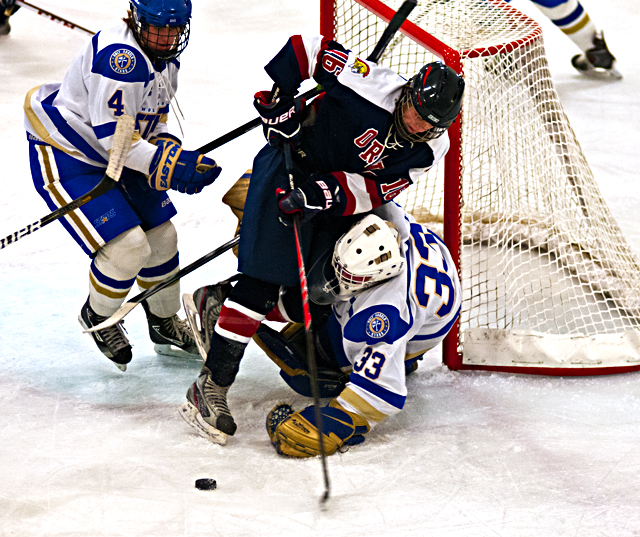 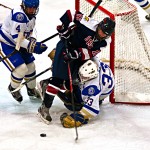 Well, did we get any more clarity to the Class 1A rankings after results from the holiday tournaments? The answer is yes — and no. We certainly did learn a few interesting things, though.

Now, on to the rankings.

Despite losing twice last week, Breck showed well against the best in Class 2A at the Schwan Cup Gold. The Mustangs fell to the top-ranked team (Edina) and also lost by one goal to a perennial power (Duluth East). But they defeated newly-minted Class 2A St. Thomas Academy in what last year would have been a battle for the top spot in these rankings. It was enough to prove the Mustangs are the team to beat in Class 1A. Perhaps the most surprising factor this year for Breck and coach Les Larson is depth. It was expected that Chase Ellingson (6-17-23), Michael Orke (10-12-22), Henry Johnson (7-2-1, 2.25, .910) and the other returning veterans would be leaders, but it wasn’t known how the newcomers would step in. As it turns out, Breck can go three lines deep with quality players — something most Class 1A teams (and many in Class 2A) can’t do.

The Green Wave usually play in the Stadstad Classic in Grand Forks over the holidays against the best in North Dakota, but this year decided to head east and play some of Wisconsin’s best in the Duluth Marshall Hilltopper Holiday Classic — but with very similar results. As they have been all year, the Green Wave was very difficult to score against. In three games, they allowed just four goals, although one was a 2-0 loss to No. 1 ranked Notre Dame Academy (WI). On the season, East Grand Forks is allowing only 1.42 goals per game, but offense has been an issue at times, including the loss to Notre Dame. Grant Loven (6-8-14), Reed Corbid (5-8-13) and Tanner Tweten (7-3-10) lead the team in scoring and are the only players with more than three goals or 10 points.

For the second straight season, Hermantown fell to Eagan in the finals of the St. Paul Premier tournament over the holidays. And in both years, the Hawks actually led late in the second period before losing. Still, it was an impressive weekend for coach Bruce Plante’s team, which absolutely routed Red Wing and South St. Paul to reach the final. Nate Pionk (10-9-19) and Ryan Kero (6-12-18) lead the Hawks in scoring, but 10 players have at least three goals in a balanced lineup. Hermantown has a big week for Section 7A seeding ahead, facing defending section champion Duluth Marshall followed by a trip to Frostbite Falls.

Warroad easily claimed the championship at its own Hockeytown Holiday Classic last week, winning three games by a combined 21-2 score. And as it has done all season, the Warriors’ top line of Kyle Sylvester (15-26-41), Kobe Roth (19-24-43) and Jared Bethune (19-24-43) powered the way offensively with 17 goals. But Warroad may be a bit too top heavy. Beyond those three — who have combined for 53 of the team’s 71 goals — there isn’t much scoring punch. The next two leading scorers are actually defensemen: Luke Jaycox (3-9-12) and Blayke Nelson (2-8-10). Still, having three of the leading scorers in the state is a nice problem for coach Jay Hardwick to have.

Perhaps the best field of Class 1A teams at a holiday tournament this past weekend was at Duluth Marshall’s Hilltopper Classic, with four Wisconsin teams matching up against Minnesota’s No. 2 (East Grand Forks), No. 5 (Mankato West), No. 6 (Duluth Marshall) and highly-regarded Delano. No Minnesota team advanced further than Mankato West, however. The Scarlets ripped through into the final against Notre Dame Academy before finally losing their first game of the year, although it was a 3-2 overtime decision. West proved to its doubters that it could play with anyone. The Scarlets are three lines deep and have a great balance between top forwards such as Derek Frentz (13-21-34), a strong defensive corps anchored by Tyler Jutting (4-9-13) and two strong goaltenders in Conor Wollenzien (6-0-0, 1.00, .941) and Jake Spiess (5-1-0, 1.64, .895).

We’re not knocking Duluth Marshall much for going 1-1-1 in its own tournament (the tie against Appleton United was decided on a shootout in favor of the visitor, knocking the Hilltoppers into the consolation bracket, but officially goes in the books as a tie). Coach Brendan Flaherty has had more than his share of injuries to deal with, but there is plenty of talent on this team. And it’s young talent. Leading scorer Luke Pavelich (10-6-16) is a senior, but the next six top scorers will all be back next winter, including super sophomore Luke Dow (3-8-11). Add in junior goaltender Alex Murray (5-4-0, 2.67, .903) and it’s a group that is sure to gain experience (and health) and be even better as the calendar flips.

Orono jumps into the top 10 this week on the basis of its strong showing in the Schwan Cup Bronze tournament over the holidays. The Spartans fell to Class 2A Rogers in the quarterfinals, but bounced back to shut out two other big-school teams in Holy Angels and Chanhassen by a combined 8-0 score. The loss to Rogers is the only one in the last two weeks for Orono, which has won six of seven and already has four shutouts this year. Part of that effort goes to the defensive corps and strong defensive play by the forwards for first-year coach Kasey Yoder. And it also goes on the shoulders of goaltender Jonathon Flakne (6-3-0, 1.34, .944) who has one of the best save percentages in the state. Jacob Flemmer (8-5-13) leads the Spartans in goals and points.

The champions of the Schwan Cup Open division, Luverne keeps moving up in the rankings as it continues to win. The Cardinals are now the last man standing on the season as the lone unbeaten team in the state after Mankato West and Hill-Murray both lost over the holidays. Luverne actually suffered its first non-victory (a 1-1 tie with St. Michael-Albertville in the Open quarterfinals), but advanced with a shootout win. The Cardinals are averaging 6.7 goals per game and only allowing 1.0. Their schedule gets knocked as weak, but they’ve taken care of business. Freshman Chaz Smedsrud (20-24-44) leads the team in scoring, but Luverne features two top-scoring lines, one with underclassmen and one with seniors. Slick Toby Sengvongxay (7-14-21) anchors the defensive corps, while veteran Kendall Meyer (8-0-1, 1.38, .952) is calm and collected in goal.

The Trojans opened a lot of eyes at the South St. Paul Premier tournament by going 2-1-0. It was the loss that was the most impressive, though, as they led into the third period against Eagan before losing 2-1. Seth Kriha (4-16-20) leads New Prague in points, while Austin Kilian (10-7-17) is the top goal scorer. Both are veterans who have been through the battles before and won’t be bowed by any opponent. Their leadership will be big this week, as New Prague travels to Mankato West on Saturday in what could be a preview of the Section 1A championship game. The winner gets a big leg up on seeding.

After opening the season with a surprising eight straight victories, St. Cloud Cathedral crashed back to earth a bit with a pair of one-goal losses to Section 6A foes at the Granite City Classic. Coach Eric Johnson has a young and inexperienced team that perhaps overachieved in early to mid-December. The Granite City Classic result reminded them that the road to a Section 6A title won’t be easy. It’s up to veterans such as Will Hammer (7-14-21) and Dan Bailey (4-14-18) to lead the young Crusaders forward from here. But they will have their hands full. Cathedral treks northwest to take on No. 2 East Grand Forks and No. 4 Warroad this weekend and also has games coming up against No. 1 Breck and No. 3 Hermantown — and that’s just in the next 14 days.