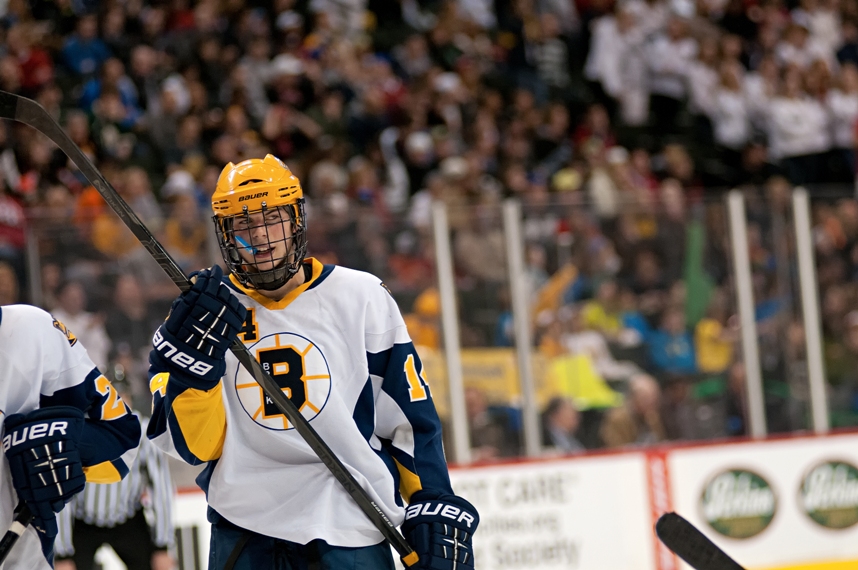 One of the most fun things about ranking teams (especially early in the season) is the amount of debate that can happen.  With so few games under their belts, teams can look like world-beaters one night and be sluggish and unimpressive the next. Not to mention that with few head-to-head meetings, sometimes there is little direct evidence for ranking one above another.

For every argument, there is a counter argument that is just as valid.

Fun? Did I mention it can also be frustrating?

So it is atop the Class 1A rankings this week. One night after beating the top team in Class 2A (Blaine) in impressive fashion, East Grand Forks was shot down by Breck — and so relinquishes its top spot to the Mustangs this week. 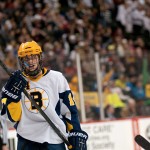 Featured Image:
Breck’s David Husband checks out the view from the top of this week’s Class A rankings.
(Photo/Tim Kolehmainen)

The Mustangs leap into the top spot courtesy of a big 6-0 victory over visiting East Grand Forks last Saturday. The Green Wave had been unbeaten and barely scored upon, but Breck found a way to amass six goals in the game — a very impressive feat for coach Les Larson’s club. Scoring goals hasn’t been a problem for the Mustangs, as they average 5.14 per game so far this year and tallied seven in a tight win over Holy Angels earlier in the week. Want scoring depth? David Husband (4-0-4) had a hat trick against EGF but is only tied for ninth on the team in scoring. Chase Ellingson (5-11-16), Michael Orke (8-8-16) and Will Blake (6-5-11) lead the offensive powerhouse.

Give the Green Wave a bit of a break. After allowing a total of just three goals in six straight victories to open the season, East Grand Forks finally threw up a stinker in falling 6-0 at Breck. But it was the second day of a back-to-back road trip to the Twin Cities and just hours after the Green Wave had beaten the No. 1 team in Class 2A (Blaine) on its home rink. Tired legs? Probably. Despite the result against Breck, coach Tyler Palmiscno’s crew remains formidable. We’ve talked plenty about its defense, anchored by Colton Poolman (2-2-4), Taylor Brierley (2-1-3), Eddie Eades (1-1-2) and Tye Ausmus (1-0-1). But lets talk offense, too. Big Tanner Tweten (5-0-5) leads the team in goal-scoring, while Grant Loven (3-4-7) is tops in points. They’ll be needed, as a huge home game against Warroad is on tap for this Friday night.

The Hawks had just one game last week, but certainly made it count, racking up seven goals against visiting Thief River Falls — a program normally known for its defensive play. Nate Pionk (4-6-10) and Ryan Kero (4-9-13) each had two goals and combined for 10 points in the game. Not surprisingly, they also lead the team in scoring on the season. But like the other top teams in Class 1A, it’s the depth of the program that has Hermantown and coach Bruce Plante near the top of the rankings again. Seven Hawks have at least two goals on the year and 14 have scored a point through five games.

You have to believe that even St. Cloud Cathedral coach Eric Johnson is surprised by the Crusaders’ fast start. In preseason scrimmages in Moorhead, Johnson admitted to having a young and inexperienced team this year, but one that he hoped would jell as the year went along. Turns out, it didn’t take long at all. The Crusaders ripped off three more wins last week, including an impressive 3-2 victory at previously unbeaten Alexandria on Saturday. Cathedral isn’t scoring a ton of goals outside of top scorers — and returning veterans — Will Hammer (5-7-12) and Matt Fritz (6-4-10), although Logan Neu (4-1-5) did score twice against Alexandria. But the Crusaders are getting it done on defense, allowing just 1.7 goals per game. Zach Fritz (7-0-0, 1.58, .932) has stepped into the goaltending role without missing a beat.

Warroad continues to get the job done against Class 1A competition, but has lost twice against the deeper teams at the Class 2A level on its schedule (Grand Rapids and Bemidji). That’s to be expected as the Warriors and coach Jay Hardwick rely heavily on their top line of Kyle Sylvester (9-17-26), Jared Bethune (11-14-25) and Kobe Roth (10-14-24). That trio has combined for 30 of the team’s 43 goals on the season. Developing scoring depth is key to a deep playoff run for the Warriors. They’ll certainly get a taste of that postseason action this week by hosting Thief River Falls on Tuesday and traveling to East Grand Forks on Friday. Those are the two chief rivals for Warroad, year-in and year-out.

At this point, there doesn’t appear to be a lot of competition for the Scarlets down south, as they continue to romp through the early part of their schedule. Mankato West rolled past three more opponents last week to remain unbeaten. In six games, the Scarlets have outscored their opposition by a massive 47-4 margin. Needless to say, there are plenty of big numbers being put up by West’s top players. Derek Frentz (9-13-22) led the team in scoring last year and is well on his way to doing so again, but there are four other Scarlets in double-figure scoring already: Nick Campbell (8-9-17), Max Mettler (5-9-14), Galt Goettl (3-10-13) and Christian Klemme (2-9-11). Another week with three winnable games is on the horizon for coach Curtis Doell and company. It could be a while before West is knocked from the ranks of the unbeaten.

Despite losing to St. Cloud Cathedral on Saturday, the Cardinals weren’t penalized in the rankings. It’s hard to knock a team that actually outshot its opponent (38-34) and forced overtime before falling to another unbeaten team. The Cardinals will get a chance to show more this week, as they visit Moorhead on Tuesday night. An interesting side note on that game: back when it was still in Class 2A, Alexandria was the last team other than Moorhead or Roseau to win the Section 8AA title (way back in 1996) . Ryan Marciniak (5-3-8), Brady Bast (4-4-8) and Matt Resch (4-2-6) have done the majority of the goal-scoring so far, while the well-traveled Sam Goetsch (5-1-0, 1.77, .908) has been a savior in goal.

Welcome back to the rankings, Duluth Marshall. You never should have left. Injuries have slowed the Hilltoppers through the first few weeks of the season, but when healthy this team is a possible contender for a state title. Since losing to St. Cloud Apollo, the ‘Toppers have ripped past traditional Class 1A powers Blake and International Falls and then upset Grand Rapids by scoring the final three goals of the game, two from Lane Eliason (2-1-3).  Luke Pavelich (7-3-10) leads the team in scoring, while Alex Murray (4-2-0, 2.67, .902) has been solid in goal. As coach Brendan Flaherty gets his team back to full strength, expect it to rise even higher in these rankings. A big test awaits on Saturday with a trip to Benilde-St. Margaret’s.

In one of the more surprising results of the week, the Tigers lost to unranked St. Louis Park, 2-0 on Tuesday night. The Orioles seemed to be a program on the ropes after former coach Shjon Podein stepped down and several players transferred in recent years. But as hockey fans know, sometimes a goalie can make all the difference. Conor Klaers stopped all 39 shots Delano fired at him for that win, one of a number of impressive ones he had last week. The Orioles nearly leapfrogged into this spot, but the belief is that Delano remains the strong all-around team, which the Tigers proved two days later by downing Totino-Grace behind two goals from Justin Oja (4-4-8) and a three-point night from Ben Meyers (2-6-8). Delano has an awfully tenuous hold on a ranking, though.

It’s a jumbled mess at the bottom of the rankings between teams with great records located in non-traditional hockey areas of the state (see Luverne, Chisago Lakes and Willmar) and traditionally-strong teams with not-so-great records (see Totino-Grace, Blake and Mahtomedi). Let’s give a bit of love to the newbies in the 10-spot, as Luverne cracks the rankings with a perfect 7-0-0 start. The Cardinals have been romping through the competition in the southwest corner of the state, outscoring seven opponents by a combined 57-7 margin. Many observers tabbed the Cardinals’ game against Minnehaha Academy as a possible indicator of their true strength. Luverne passed with a 5-3 victory, keyed by two goals from Jaxon Nelson (12-10-22) and three-point nights for Andrew Verhey (3-9-12) and Chaz Smedsrud (13-13-26). Saturday’s game against Achiever Academy could also be a test for Luverne.