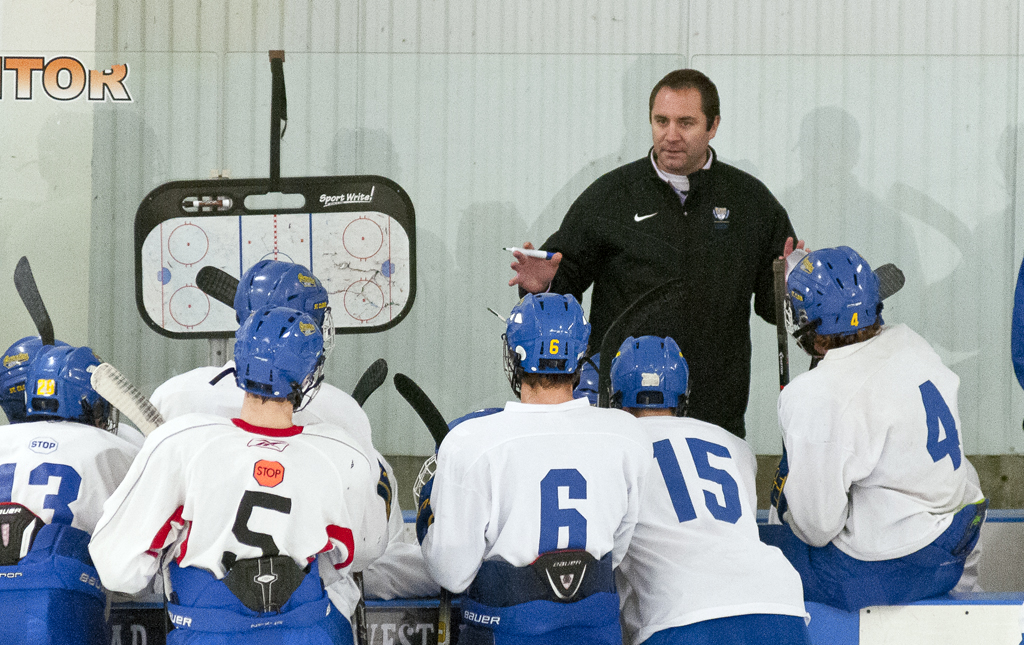 The final 2013-14 MHM Class 1A top 10 rankings see a bit of shifting between the programs, but no new teams managed to crack high school hockey’s version of the G10. East Grand Forks retained its top ranking again, but western suburban private school power Breck has surged into the No. 2 spot.

Ending the season on a 14-game winning streak, East Grand Forks earned the top seed in the tough Section 8A playoffs — and the top ranking in our final Class 1A poll of the season. The Green Wave continued their withering defensive efforts, allowing a single goal to rival Thief River Falls. Only two teams all season have scored more than two goals against East Grand Forks (Breck in a 6-0 victory on Dec. 14 and Roseau in an 8-3 loss on Jan. 14). They’ve posted seven shutouts and another 11 games in which they’ve allowed just one goal. If the cliché holds that defense wins championships, the title is certainly going to go through East Grand Forks this winter.

Breck claimed the No. 1 seed in the upcoming Section 2A quarterfinals and hopes to continue its run of state tournament berths. The only Minnesota-based team to defeat East Grand Forks this year, Breck has won eight straight since a mid-season struggle. In a nine-game span from Dec. 26 through Jan. 21, the Mustangs went 4-5-0. But their offense has responded in the final month of the regular season, paced by Michael Orke (23-25-48) and Chase Ellingson (20-28-48). Breck also has the comfort of playing in front of playoff-tested goaltender Henry Johnson (15-5-1, 2.06, .915).

Warroad claimed the No. 2 seed in the Section 8A playoffs but is a dangerous team, even though the Warriors lost and tied top-ranked and top-seeded East Grand Forks in their two meetings. A potential rematch in the section final could set up as the state’s best defense against its top line in Warroad’s Kyle Sylvester (36-47-83), Kobe Roth (40-45-85) and Jared Bethune (31-53-84). No other top line has the firepower of the Warriors’ unit, but is there enough depth to make a deep playoff run and get to the X? Warroad’s next top three scorers are all defensemen: Luke Jaycox (3-20-23), Nick Jaycox (7-13-20) and Blayke Nelson (5-11-16). Only three other skaters have more than a single goal.

Hermantown, shifted back with its neighbors in the northeast in Section 7A, captured the top seed for the playoffs. But the Hawks aren’t flying high entering the playoffs, as they finished 2-1-2 in their last five games, including a tie with potential section foe Duluth Denfeld on Feb. 3. Hermantown, the four-time state Class 1A runner-up, does have the benefit of plenty of playoff experience as well as a balanced and deep lineup. Ryan Kero (18-23-41) leads six players with double-digit goals and an even dozen with double-figure points.

Despite losing only two games all season, Mankato West was dropped to the No. 2 seed in the Section 1A playoffs due to a 2-1 loss to New Prague, the top seed. Since that loss on Jan. 4, the Scarlets have won 12 straight games, allowing more than two goals just once (a 6-3 win over Rochester Mayo on Feb. 8) and with three shutouts. West draws plenty of notice for its offense, anchored by Derek Frentz (22-45-67) and Nick Campbell (21-29-50), but its defensively where the Scarlets have been equally impressive — and where they’ll make hay in the playoffs. Goaltenders Conor Wollenzien (14-1-0, 1.13, .930) and Jake Spiess (9-1-0, 1.49, .903) have combined for eight shutouts on the year.

The Cardinals capped the only unbeaten season in the state with a victory at Providence Academy. They also earned the No. 1 seed in the Section 3A playoffs and should be considered a heavy favorite to reach their first-ever state tournament. Luverne is the top scoring team in the state and the stingiest defensive team. What more could detractors want? Perhaps a tougher schedule? But more importantly, a first state tournament berth. Led by freshman Chaz Smedsrud (35-45-80), the Cardinals hope this is the year they make that breakthrough.

The two-time defending Section 7A champions were awarded the No. 2 seed this winter, as they slipped behind Hermantown, which came over from Section 5A after four straight state runner-up finishes. That No. 2 seed is no knock on Marshall and its’ talent, but the Hilltoppers did lose to both Hermantown and fourth-seeded Duluth Denfeld during the regular season. Senior leading scorer Luke Pavelich (20-18-38) has been on fire recently, posting six goals in his last three games. Junior goaltender Alex Murray (15-7-0, 2.18, .906) has also been key, allowing only two goals in his last four starts.

New Prague earned the top seed in the upcoming Section 1A playoffs, courtesy of a 2-1 regular season victory over second-seeded Mankato West. The Trojans are seeking their first-ever state tournament bid, something that has died at the hands of powerful Rochester Lourdes the past five years. But Lourdes was rebuilding this year, setting up what looks like a showdown between New Prague and West in the final. It could be a doozy, as New Prague has played a host of close games — three times, three single-goal losses, and six one-goal victories. That’s nearly half of the games coming down to the bitter end. Senior Augie Isaacson (23-29-52) is completing his final season with a flourish, scoring seven goals in his last six games.

This week: Section 6A quarterfinals vs. Little Falls (2/18)

In its first season in Section 6A, St. Cloud Cathedral captured the top seed in the upcoming playoffs, despite a 1-1-1 record in the final week. But it can be argued that no one in the section played a tougher schedule than the Crusaders. Their seven losses included ones to teams ranked No. 1, 2, 3, 4 and 7 in the final Class 1A poll. But for other Section 6A teams looking for hope, there was a pair of one-goal losses to section rivals Sauk Rapids-Rice and Sartell-St. Stephen at midseason. Should Cathedral beat Little Falls in the Nos. 1-8 seeding game, they’d face the winner between those teams in the semifinals. Cathedral hasn’t had much scoring balance, although sophomore Logan Neu (16-15-31) has goals in eight of his last 10 games.

Totino-Grace surged into the top seed in the Section 4A playoffs, which is missing a familiar face after three-time Class 1A state champion St. Thomas Academy left the section for Class 2A. The Eagles won’t miss the Cadets, nor will the other teams in 4A such as second-seeded Mahtomedi. While the Eagles are the favorite, they did lost to Mahtomedi way back on Dec. 10, 4-3. But that was before Nick Tandeski (15-14-29) and Kai Barber (15-11-26) began to carry the offense.  Barber hasn’t scored since a hat trick against Benilde on Feb. 4 (five games), while Tandeski has just two in that span.