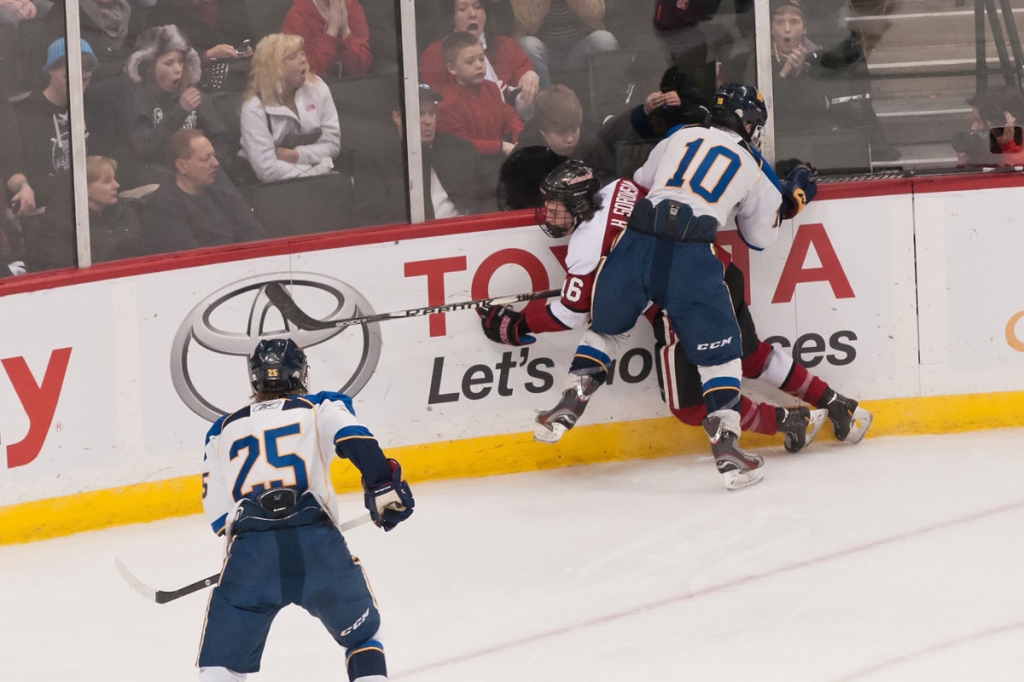 The various Holiday Tournaments proved that this year will continue to provide a number of surprises.  Wayzata was the big gaining team by winning the Sports Authority St. Louis Park Holiday Classic and vaulting back into the top ten.  The Edina Hornets step up to the top spot in the Class AA rankings.  Eden Prairie had a tough week and were knocked out of the top ten.  Lakeville North was impressive in all phases of the game and make their debut in the top ten this week.  There are 10-15 teams that can all make cases for being in the top ten and that sets up what will be an unpredictable second half to the season with the playoffs appearing to be more interesting than ever.

1.  Edina Hornets (10-2-0, 0-0-0)  The Hornets put together two quality weeks of wins to catapult to the top spot unseeding Hill-Murray in the MHM Class AA rankings.  The culmination of their last 6 wins in a row over those two weeks was the 4-2 victory at the Schwan’s Cup Gold Division final Saturday night.  The Hornets rallied from three goals down in the third period against Burnsville to capture a 4-3 overtime semifinal win to earn that right.  Edina opened the tournament with a 4-1 win over the #1 ranked Class A Breck Mustangs. This week they have three games that include a face-off with the 7-1-1 Cretin-Derham Hall Raiders,  a re-match with the Burnsville Blaze from the Burnsville Civic Center and that game can be heard on Sports Radio 105 the Ticket and seen right here on MinnesotaHockeyMag.com, and a stiff test with the White Bear Lake Bears.

2.  Hill-Murray Pioneers (9-1-0, 4-0-0) The Pioneers won 9 straight games before falling to the Edina Hornets in the Schwan’s Cup Gold Division final game by a score of 4-2.  That loss moved them down one slot to #2 this week.  The Pioneers have been scoring goals at an efficient clip and this week was no different leading up to the Edina game.  They opened the tournament with a quarterfinal round win over Duluth East 6-3.  They also topped Minnetonka 5-3 to set up their game with Edina.  The Pioneers are off all week until Saturday when they face the Lakeville North Panthers who have cracked the MHM top ten with a terrific run at the St. Louis Park Holiday Classic.

3.  Wayzata Trojans (9-3-0, 0-0-0)  In a season that is seeing teams jump in and out of the top ten and returning again, the Wayzata Trojans are the epitome of this trend.  After opening the seasonk in the top ten, they faded with three losses, all before December 7th.  Since then, they have won five straight games including three at the St. Louis Park Holiday Classic.  They opened with a 3-2 win over the Moorhead Spuds and followed that up with a 6-1 win over the Bloomington Jefferson Jaguars.  The biggest test was with last week’s #3 Blaine Bengals and the Trojans passed with flying colors in earning a 4-0 win.  It was a win that featured a steady performance in all areas of the game.  They have two big Section 6AA games this week as they play host to the Benilde-St. Margaret’s Red Knights on Thursday and then travel to Victoria to battle the Holy Family Catholic Fire on Saturday.

4.  Blaine Bengals (8-2-1, 6-0-0) The Blaine Bengals had an interesting week at the St. Louis Park Holiday Classic as the hammered the Maple Grove Crimson 9-3 in a quarterfinal game that doubled as a Northwest Suburban Conference game. They ran into a stiff challenge from the Lakeville North Panthers that ended in a 3-3 tie with the Bengals prevailing in the shootout.  Up next was the championship game with the Wayzata Trojans and that resulted in a 4-0 loss moving the Bengals down a notch to #4 this week.  They are still an incredibly deep team that puts pucks in the net and has the ability to light it up on any given night.  This week on deck for the Bengals is a conference game with the Andover Huskies on Saturday afternoon.

5.  Benilde-St. Margaret’s Red Knights (9-2-2) Since losing two straight games a few weeks back, the Red Knights are 5-0-2 since.  Their week consisted of a 3-3 tie with Bloomington Jefferson that resulted in a shootout loss at the St. Louis Park Holiday Classic.  The Red Knights finished with back-to-back wins that included repelling the Moorhead Spuds 4-2 and handling the Eden Prairie Eagles 5-2.  One game is on the docket for the Red Knights this week and that is a Thursday night affair with the Wayzata Trojans.

6.  Lakeville North Panthers (8-3-1, 7-1-0) After starting the season 2-3, the Panthers have found their groove and are on a 6-0-1 run in their last 7 games.  This past week it was a successful St. Louis Park Holiday Classic that featured a 7-0 shellacking of last week’s #4 Eden Prairie Eagles, a 3-3 tie with the #3 Blaine Bengals, and a 5-1 win over the #8 Bloomington Jefferson Jaguars to take third place in the tournament.  The unbeaten string will be on the line as they have a huge test with the #2 Hill-Murray Pioneers this Saturday.

7.  Burnsville Blaze (8-3-0, 5-1-0)  The Blaze started the season 1-2 and are 7-1 since.  Their only conference loss was to #6 Lakeville North and wins this week in the Schwan’s Cup Gold Division against St. Thomas Academy by a score of 3-2 and Minnetonka 3-0 delivered a third place finish.  They were 17 minutes away fro the championship game and a rematch with the Hill-Murray Pioneers yet saw it slip away against Edina.  The Edina Hornets rallied for three goals in the third period and won in overtime to stop the Blaze winning streak at seven games.  This week, two tough games are on the schedule, the first with the #1 Edina Hornets in a re-match from last Saturday’s championship game.  That game can be heard live on Sports Radio 105 The Ticket and also seen streaming simulcast on MinnesotaHockeyMag.com  The Bloomington Jefferson Jaguars close out the Blaze week on Saturday.

8. Grand Rapids (9-3-0, 1-0-0)  The Thunderhawks played three games in a row this past weekend at home and won all three.  They opened play with a 5-4 win over Mahtomedi, followed that up with a 7-2 trouncing of St. Francis and topped Brainerd by a score of 3-1.  They are on a 4 game winning streak and face off with Cloquet-Esko-Carlton and have the scrappy Hopkins Royals on Saturday.

9.  St. Thomas Academy (5-3-1, 1-1-0) The Cadets staved off banishment to the Silver Division of the Schwan’s Cup with a win over Prior Lake in the 7th place game of the Schwan’s Cup Gold Division.  One goal losses to #7 Burnsville (3-2) and #1A Breck (5-4) could have gone either way yet a 2-3-0 run over the last five games puts them on the edge of the top ten.  They have a chance to improve their standing with games against Totino Grace and Mahtomedi this week.

10.  Eastview Lightning (8-2-0, 3-2-0) The Lightning put together three straight wins at the Schwan Cup Silver Division as they defeated Andover (4-1), Roseville (2-1), and Centennial (2-1) to run their winning streak to four games.  The Lightning are a deep team that had a dicey run two weeks back but have worked they way through it.  This is a team  that can beat anybody in high school hockey.  The Lightning face-off with the Bloomington Kennedy Eagles who are playing some solid hockey to date in their only game this week.