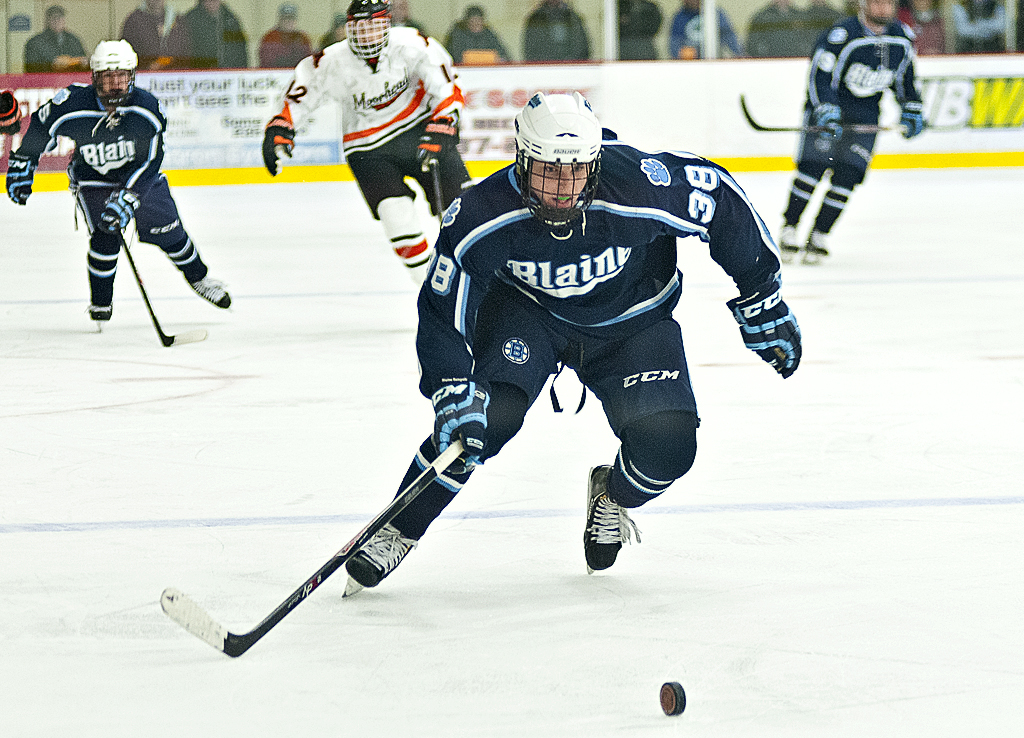 Outlook: The Lakeville North Panthers have been the talk of high school hockey in recent weeks as they went on a 19 game unbeaten streak (18-0-1) that spanned more than two months.  The streak was snapped in Lakeville North’s last game of the regular season to Prior Lake.  As expected, all indications point to the Panthers as the heavy favorite for the Section 1AA title.  The Farmington Tigers produced a 21 win season by feasting on Missota Conference foes and were rewarded with the number two seed. The Tigers are in the midst of a 16-0-1 run over their last 17 games, yet did not play any ranked AA teams this season.  Getting past the defending Section 1AA Champion Panthers will be difficult with other tournament tested teams in the pool.  Never count out Lakeville South who has plenty of offensive talent and Rochester Mayo who put together a 16 win season.  MNHockeyMag Predicts:  Lakeville North over Lakeville South.

Outlook:  The Edina Hornets have been Section 2AA Champions for the last seven seasons.  As the number one seed, and one of four teams with 20 or more wins on the regular season in Class AA hockey, the title runs through the Edina Hornets again.  A split in the regular season games between Burnsville and Edina could produce an entertaining final that would double as the “rubber” match between Edina and Burnsville.  Burnsville as been tied or led Edina 96:16 out of the 101:42 of play between the two teams this year.  Upset minded Bloomington Jefferson split with the Blaze in a thrilling overtime win that was sparked by Johnny Panvica’s hat-trick.  When healthy, Jefferson can play with anyone, and they currently are healthy and that includes Panvica who was coming off an MCL sprain.   Prior Lake earned a 1-0 resume win against Lakeville North late in the season illustrating that they can play with anyone and win on any given day The Lakers can also lose to anyone on any given day.  It will be difficult to unseat Edina who are always suited for the big sheet of Mariucci Arena.   MNHockeyMag predicts:  Edina over Burnsville

Outlook:  With ten teams, the Section 3AA is the largest section in Class AA boys hockey.  The section is wide open and paced by the Cretin-Derham Hall Raiders who were 10-0 against section foes this season and finished second to White Bear Lake in the Suburban East conference.  Eastview’s Zach Driscoll is among the best goaltenders in the state and is tournament tested.  As a team, the Lightning have given up just 47 goals and  trail Edina (46), Eagan (45) and Wayzata (32) in total goals against for the Class AA.   Eastview has depth and balance offensively with ten players collecting double digits in points.  St. Thomas Academy can put the puck in the net and their 138 goals are the most among Class AA teams.  That will make for some intriguing match-ups in the section.  Eagan is a legitimate section title contender and have earned impressive wins this season.  Any of the top four teams have a chance to advance to the State Tournament.  MNHockeyMag predicts:  Eastview over Cretin-Derham Hall.

Outlook:  The history is deep between Hill-Murray and White Bear Lake.  One team or the other has represented their section every year since 1982 except for one, and that was in 2004.  The Pioneers have enjoyed another productive season as they earned the share of the Classic Suburban title with St. Thomas Academy.  The two teams offered a potential preview to a section final that featured Hill-Murray defeating White Bear Lake in an intense 5-4 overtime win a few weeks back.  The White Bear Lake Bears captured the Suburban East conference championship in another tense battle with Cretin-Derham Hall on their last day of the regular season.  The Stillwater Ponies are a team that can beat anyone on a given day and could be a thorn in the Bears side if they meet.  The Bears and Ponies played to a 6-5 White Bear Lake overtime win a few weeks back. The Poinies closed out the season 3-1-1 in their last five games.  The Roseville Area Raiders are a potential bracket buster and carry an impressive 14 win season to the playoffs.  MNHockeyMag Predicts:  White Bear Lake over Hill-Murray

Outlook:  The Blaine Bengals have 15 seniors on their roster and score at a high rate.  Blaine’s 137 goals ties them for second among Class AA teams with Hill-Murray and the Bengals are just one goal off St. Thomas Academy’s 138.  There was considerable internal and external expectations on the Bengals this year and they have done a solid job managing that.   Their 3-4-1 record against MinnesotaHockeyMag top ten teams this year is a cause for concern should they qualify for the State Tournament.  The Maple Grove Crimson are 2-2-1 in their last five games including a 5-1 loss to the Bengals that closed out the season. Finding that consistency will be key to advancing for Maple Grove.  Centennial, Anoka, Champlin Park, Osseo, and Coon Rapids all play in the Northwest Suburban conference and there will not be many secrets come playoff time.  The wild card resides in the Rogers Royals who are making their Class AA debut this season in the Section 5AA.  With an impressive 18-6-1 record this year, the Royals are not to be overlooked although their strength of schedule is not as difficult as most of the 5AA field.  MNHockeyMag Predicts:  Blaine over Maple Grove

Outlook:  The Wayzata Trojans have separated themselves from the rest of the 6AA field.  Eden Prairie rallied themselves to the 2nd seed and therefore avoid a potential second round match-up with the Trojans.  Eden Prairie poses a legitimate threat with a pair of DI commits and Mr. Hockey finalists in Luke Snuggerud and Steven Spinner.  The Holy Family Catholic Fire are formidable and could be the team that represents the section 6AA if it is not the Wayzata Trojans.  19 wins is nothing to sneeze at and the Fire played the Trojans to an overtime loss.  Benilde-St. Margaret’s (BSM) has two D1 recruits in their own right with Johnny Austin and Spencer Naas.  BSM face the upset minded Hopkins Royals who have been playing solid hockey the last two weeks of the season.  The Trojans are in the best position to win the Section 6AA title as they have the balance and depth in all aspects of the game.  With just 32 goals against this year, that is the low for all Class AA teams this year, the Trojans are solid on the big sheet.  Their home rink is Olympic size and Wayzata posted a 10-1-1 recored at home that will bode well for a potential section final at Mariucci Arena which of course is a big sheet.  MNHockeyMag Predicts:  Wayzata over Holy Family Catholic.

Outlook:  The top five teams combine for an (85-34-5) record and is wide open like many of the other sections.  The teams have taken turns beating each other and it looks to not matter where they are seeded this season.  St. Francis defeated Cambridge-Isanti in the play in game to earn the first round match-up with Duluth East.  At various stages of the year, it appeared as though Elk River was fast-tracking to the top spot.  Then the Grand Rapids Thunderhawks caught fire and were in solid position.  The steady surge from the Andover Huskies has propelled them to the third seed and could end up playing in the section final.  The 7AA is peppered with high level players as Grand Rapids  has a Mr. Hockey finalist in Avery Peterson who is also a draft choice of the Minnesota Wild.  They also have a Brimsek finalist in Hunter Shepard in goal who can win games on his own.  The Hounds have a Mr. Hockey finalist of their own in Phil Beaulieu who quarterbacks a power play that clicks at 42%.  Goaltending is key in Elk River as Mac Berglove is another Brimsek finalist and his team can put the puck in the net on the offensive side of things.  Tyler Tomberlin is lights out and has had a Mr. Hockey like year (26g-39a-65pts)  for Andover.  There isn’t a team that remains in the final eight of the 7AA that can’t win any game at any time and this section and much like the 3AA is wide open.  MNHockeyMag Predicts:  Duluth East over Andover

Outlook:   Either the Roseau Rams and Moorhead Spuds have punched their ticket to St. Paul every year since 1996 and this year does not seem to be any different.  The Rams  have delivered the best season of any the teams in the section.  Zach Yon is a Mr. Hockey finalist for the Rams is part of the big three that include Alex Strand and Cole Bjugson. for the Rams.  Most of the teams have taken turns beating each other in Section 8AA play.  Roseau is unbeaten (6-0-1) in sectional play and Brainerd owns the most wins (7-3-1) while Moorhead is an impressive 5-2-1 in the section.  Buffalo owns the second best record  overall but are just 1-4-0 in 8AA games this year.  River Lakes won their play in game and will face off with Roseau in the quarterfinal round.  MNHockeyMag Predicts:  Roseau over Brainerd/Pillager/Pierz.