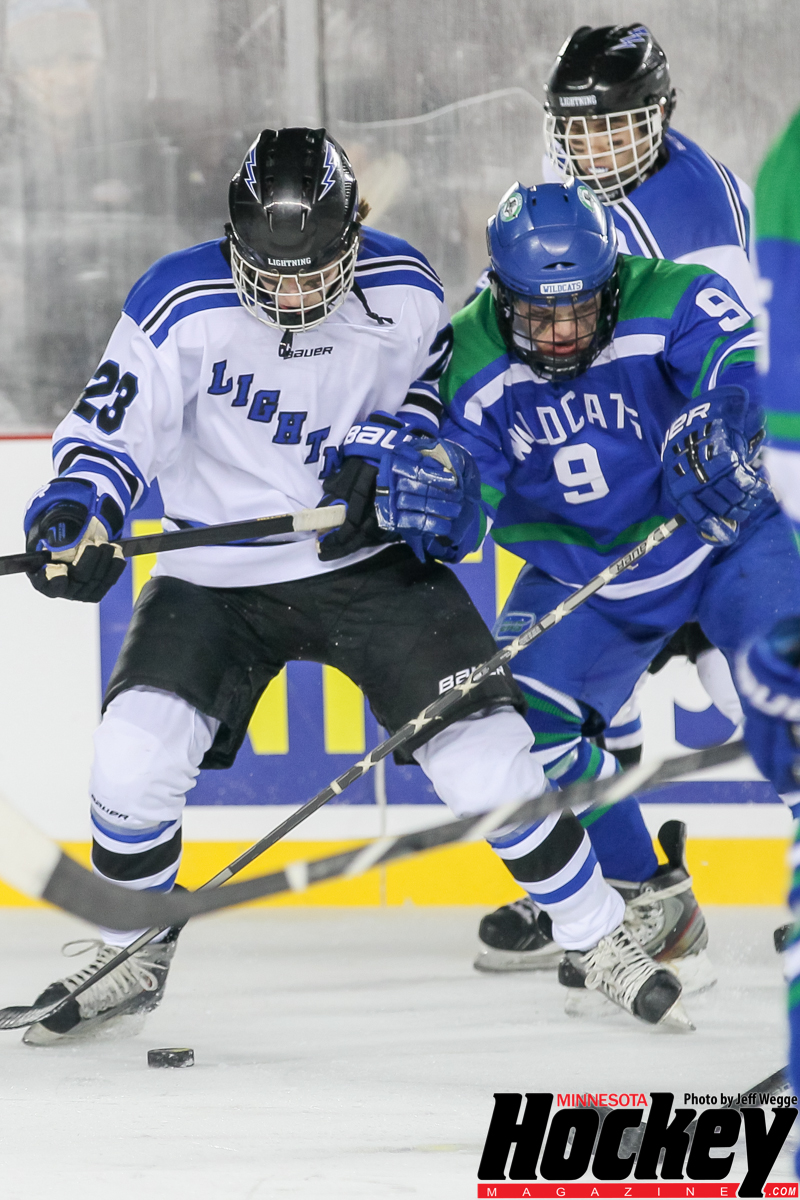 Welcome to another wild week and the continued juggling of the top ten.  This week, Hill-Murray reclaimed their top spot in the MHM Class AA rankings with back-to-back wins over Wayzata and Edina.  The Lakeville North Panthers are stalking the Pioneers for the top spot.  We say good bye to the Benilde-St. Margaret’s Red Knights, Grand Rapids Thunderhawks, and St. Thomas Academy Cadets this week.  A welcome back is in store for the Elk River Elks and Duluth East Greyhounds.  For the first time this year,  the Cretin-Derham Hall Raiders make their top ten debut.  Don’t get to used to where these teams stand as there will continue to be movement to the final week of the season.

The Pioneers vault to the top spot of the MHM  Class AA rankings for the second time this season and for good reason.  They ended an impressive 7 game winning streak of the Wayzata Trojans and in doing so, ended a two-game skid of their own.  More impressively, they routed the Edina Hornets 6-1 avenging a pair of 4-2 losses that date back to the Schwan’s Cup Gold Division final and the State Class AA State Final.  The Pioneers were 3-8 with the man advantage against the Hornets.  Mitch Slattery had (1g-3a-4pts) while Zach Mills (2g-1a-3pts) and Joey Anderson (2g).  While the Pioneers lost to Lakeville North, quality wins over Burnsville (5-3), BSM (7-3), STA (3-2), and Duluth East (6-3), to go along with Edina and Wayzata,  earns Hill-Murray the right for the top spot this week.  They continue their home-stand with a key face-off with Section 4AA rival White Bear Lake this Thursday at Aldrich Arena.

It was a tough decision to keep the Panthers out of the top spot for this week as they may be the hottest team in High School Hockey.  They have not lost since December 7th and are 10-0-1 including winners of 5 straight.  What is holding them back is they have a tie with Blaine, which at the time was a top 5 team and not enough to challenge number of quality wins that Hill-Murray has.   Other key wins include Burnsville (5-2), Eden Prairie (7-0), Hill-Murray (3-0), and Eagan (4-2).  Both Eden Prairie and Eagan have not been ranked in recent weeks. The head to head with Hill-Murray is impressive yet, I can hear the MHM Nation ripping this move and it is rippable.  It was just too productive of a week or the Pioneers with a pair of big time wins to not put Hill-Murray the top spot.  To this moment, this author is having a tough time leaving the Panthers at number two, but feel as though this tough decision stands for the week.  The Panthers have a defining game agains the Burnsville Blaze on Saturday.

The Trojans were in the top spot last week but fell two notches to #3 after losing to the Hill-Murray Pioneers by as score of 3-2 last Thursday.  That loss stopped a seven game winning streak for the Wayzata.  They played well enough to win however, the steady improvement of the Pioneer game stopped the Trojans on a Josh French goal with :28 left in the third period.  Eight Trojan games have been decided by one goal this year and Wayzata is 5-3 in those games.  Two marquee match-ups are on the schedule for the Trojans this week as Lake Conference play begins.  The Eden Prairie game can be heard live on Sports Radio 105 the Ticket Thursday night and the Hornets will be buzzing around the Plymouth Ice Center on Saturday.

The Blaze stand-pat at #4 this week in the MHM rankings with a 3-0 win over the Bloomington Jefferson Jaguars.  They continue to see their goals against drop and sport a 9-1-0 record in their last ten games including wins in their last three affairs.  Up next is a game with the Lakeville South Panthers and chance to make a statement against them on Saturday.  The Panthers captured game one between the two teams by a score of 5-2 earlier in the season  back on November 30th.

The Hornets were thumped by the Hill-Murray Pioneers on Saturday which was the only game on the schedule for Edina.  They are in the midst of three weeks where they play one game a week on Saturday’s while the team focuses on its game and conditioning.  It is not abnormal for the Hornets to drop a few games at his time of the season and last Saturday was not an exception.  They did lose the special teams battle 3-0 against the Pioneers as the Hornets were (0-6) and the Pioneers were (3-8) with the power play.  At the end of the day, losing the special teams battle on a nightly basis will make a run to a championship more difficult for the defending champs.  The Hornets face Wayzata on the big sheet in Plymouth which always makes for an entertaining contest.

They are back in the MHM top ten and have stormed back to prominence with authority.  The Elks had an impressive week that opened with a 6-4 win over the Blaine Bengals.  They defeated Osseo and are the only undefeated team in the Northwest Suburban Conference at 6-0-0.  After three straight losses in the Edina Holiday Classic, the Elks bounced back with four straight wins of their own.  They own quality wins over Edina (3-1), Duluth East (3-2), and Blaine (6-4).  Their losses are to three quality opponents as Eden Prairie (3-1), Edina (6-3), and Grand Rapids (3-2).  It is a big week for the Elks as they play host to Hockey Day Minnesota and Stillwater will be their opponent.  It will be important to not look past the Centennial Cougars or Champlin Park Rebels this week for the Elks.

11-2-0 is an impressive record and the Lightning are tied for the fewest losses of the teams in the top ten.  They do not have a huge number of quality top ten wins but the 4-3 win to open the season over Lakeville North is legitimate.  The Lightning  have clearly taken care of business and are proving that the South Suburban Conference could very well be the most difficult  conference this season.  A pair of one goal games were added to their resume including a 3-2 victory over the Eagan Wildcats  who if not for 6 losses, would be a top ten type team. The Wildcats have won 7 straight and are proving to be on pace for the top seed in the Section 3AA.

To illustrate how this season has gone, one need look no further than the Blaine Bengals.  They have had two stints in the top spot of the MHM and are sliding down the rankings quickly.  Blaine is a quality team, but this season is proving unpredictable and on any night, teams are being beat.  Such is the point illustrated by the Elk River Elks who are a top contender for a section 7AA title and nothing to be ashamed  in losing to for the Bengals.  Blaine 1-2-1 in their last four games and do not have any quality wins over top ten ranked opponents this year.  To date, their record is 0-3-1 with one of those losses coming to the then top ranked East Grand Forks Green Wave by a score of 3-1.  Other losses to top ten AA teams include Wayzata (6-0), and Elk River (6-4).  Their tie was against Lakeville North (3-3), which is a quality top ten team in at number two is their only resume building win of top ten teams.  Another tough game is on the schedule as the Bengals who will look to pick up a quality win over the always tough to play Duluth East Greyhounds in Duluth.

The Hounds have been quietly impressive this year.  It is fair to say they have somewhat flown under the radar and now is the time they be recognized for a solid body of work thus far.  Their formula is effective every year and that includes a low goals against average and sizzling power play.  The Hounds average just 1.79 goals against and have a power play that works at 31% so far this year.  With a huge Section 7AA win over Grand Rapids by a score of 5-0, the Hounds have earned six straight wins since losing to Hill-Murray 6-3 in the Schwan Cup.  Quality wins include Wayzata (3-2), Breck (2-1),  Eden Prairie (3-1), and Grand Rapids (5-0).  They have a huge test with the Blaine Bengals this week and round it out with a test at Maple Grove on Saturday.  Also on the schedule is Apple Valley this Thursday.

Winners of four straight, the Raiders are proving in the first half of the season they are legitimate Section 3AA contenders and currently are the leaders of the Suburban East conference.  The win over White Bear Lake (3-1) at the TCF Bank Stadium was a resume builder and enough to propel Raiders to the top ten for this week as one of the hotter teams in the State.  They will look to keep pace in the Conference this week with a pair of games, first against Forest Lake and then against Hastings.