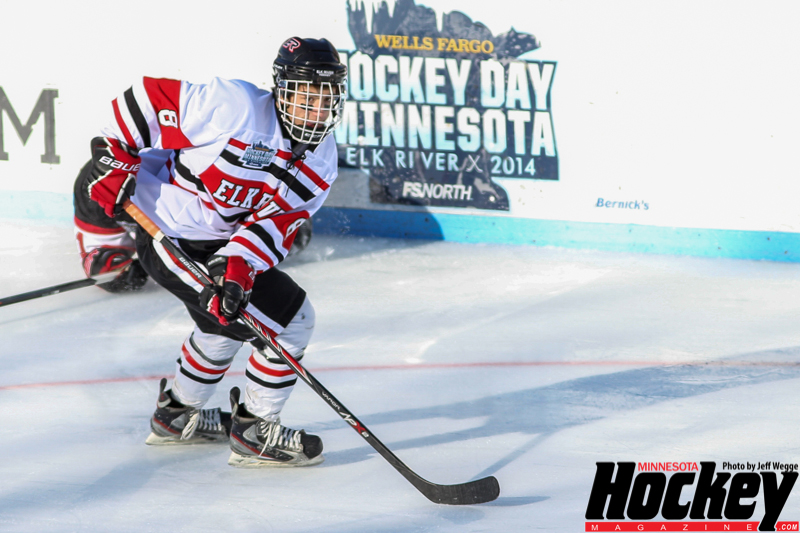 Surprisingly, there was not a lot of change in the top five of the top ten this week.  The MHM Class AA rankings welcomes in the Holy Family Catholic Fire the first time this year.

The Pioneers whitewashed Classic Suburban conference foe Tartan by a score of 9-2 and needed overtime to sneak past chief rival White Bear Lake by a score of 5-4.  It was a Josh French goal at 9:15 of the third period to tie the game at four and Joey Anderson put away the game winning tally 54 seconds into the overtime session.  After losing back-to-back games to Edina and Lakeville North the Pioneers have responded with five straight wins including impressive wins over Edina and Wayzata.  It’s time for the hockey world to keep their eye on French who is a senior and the real deal and scores huge goals for his team.  He has picked up (6a-4a-10pts) in his last five games and is on a four game goal streak.  He also has three game winning goals to his credit this year as well.

The Panthers took care of business by defeating the Bloomington Kennedy Eagles and then looked ahead to the big show down with the Burnsville Blaze, a team they had beaten in week one of the season by a score of 5-2.  This most recent game was a 5-4 thriller that required a Jack Poehling goal with :52 left in regulate.  Ian Klotz closed the deal with the winner at 3:02 in overtime for the Panthers.  A notable aspect regarding  the Panthers is the balance they have offensively which proved to be too much against the Blaze.  Six players now have 20 points or more led by Jack Poehling’s (18g-19a-37pts).  Ten players have earned double digits in points this year as well.   A tough game with Eastview is on deck this week and will challenge their spot in the conference and rankings.

The Trojans opened the Lake Conference schedule with a well-played 1-0 win over the Eden Prairie Eagles as Jack Sorenson delivered the game’s lone goal late in the third period.  They had a Hornet team after the EP grinder which would test their mettle.  When Wayzata and Edina play, whether on the big sheet or at Braemar, they seem to bring the best out in each other.  Three second period goals changed things for the Trojans as they erased a 1-0 first period Edina lead.  The Hornets scrapped back with a third period goal to force overtime and the eventual tie.  The Trojans continue their play in the Lake Conference with a game against Minnetonka and then host Prior Lake in non-conference action.

Let’s be honest earning a tie in one game, the only of a team’s week,  should not warrant moving up one spot in a top notch top ten like the MHM rankings.  However, the Burnsville Blaze lost, and while  it was to the #2 Lakeville North, it was still a loss and put Edina in position to move up.  The tie against the #3 Trojans propels the Hornets over the Blaze this week.  They have split with the Blaze and are 8-3-1 against teams that are ranked in the MHM top ten and that includes long-time #1 Breck in the Class A.  The fact that 12 of their games have been against difficult competition and fighting through it impressively says a lot about this team.  They are always a team to take seriously and will be a factor in the end as always.  They will look to take care of business against Hopkins and Minnetonka in Lake Conference play this week.

While they are known to play in some close games, this team is still equipped, in the opinion of the MHM Rankings Committee, to be major contenders for the Section 7AA title despite their loss to Grand Rapids at the Edina Holiday Classic.  They are in the midst of the seven game winning streak that includes a 4-1 win over Stillwater as they successfully hosted an impressive Hockey Day Minnesota event.   The Elks haven’t lost in nearly a month since the Grand Rapids loss at the Classic on December 21st.

The Blaze earned a split with the Lakeville teams this week in beating Lakeville South 5-2 and losing a heart breaker to Lakeville North 5-4 in overtime. The loss to Lakeville North stopped a run of four straight games and a period where they won 10 of 11 games.  All five of their losses have come to ranked teams in the top ten of the MHM at some point this season.  The Blaze 5-4 record against top ten teams puts them below Edina in the rankings, who has a better record in such games to go along with their split (Edina and Bville) in two games this year.

A huge win was delivered by the Bengals and it was on the road.  It was a much needed victory as the Bengals were stumbling with a 1-2-1 record going into actoin last week.  The Bengals are now 2-3-1 against teams ranked at some point in the Class AA or Class A MHM rankings.  Their week is a mix of non-conference an conference play leading off with Minnetonka followed by a pair of  NWSC games featuring Robbinsdale Armstrong and Osseo.  Blaine will look to keep pace in the conference with the Elk River Elks.

The Fire make their debut at #8 in the MHM rankings this week and for good reason. At this point, they should be the #2 seed of the Section 6AA.  Their only loss in sectional games was to Wayzata and that was in overtime.  They average 5.36 goals per game and just 2.14 against.  Noel Rahn’s team has won four straight and 9 of their last 10.  They are 1-1-1 against teams that have been ranked in the Class AA of the MHM and have the tie against Breck who has been #1 Class A for much of the year. They will be challenged  this week by the offensive game of the Roseau Rams and the Delano Tigers are a tough team to play against.

The loss to the Prior Lake Lakers is a tough one, but at 8-7-1 the Lakers have been hit and miss this year.  Due to that , it isn’t enough to toss the Lightning from the top ten as a 13 win season to this point is impressive.  They responded to the loss big over Hastings and Rochester John Marshall.  They are 2-2 against top ten teams this year.

It was an underwhelming week for the Hounds yet they hold on to the final spot of the top ten by their finger nails.  A 1-1-1 week that included a loss to Blaine and a scare overtime win over Apple Valley.    The Hounds have one Section 7AA game against Forest lake this week.  They are 4-3 against the top rated teams in the MHM polls this year and subsequently fall in the number ten spot.