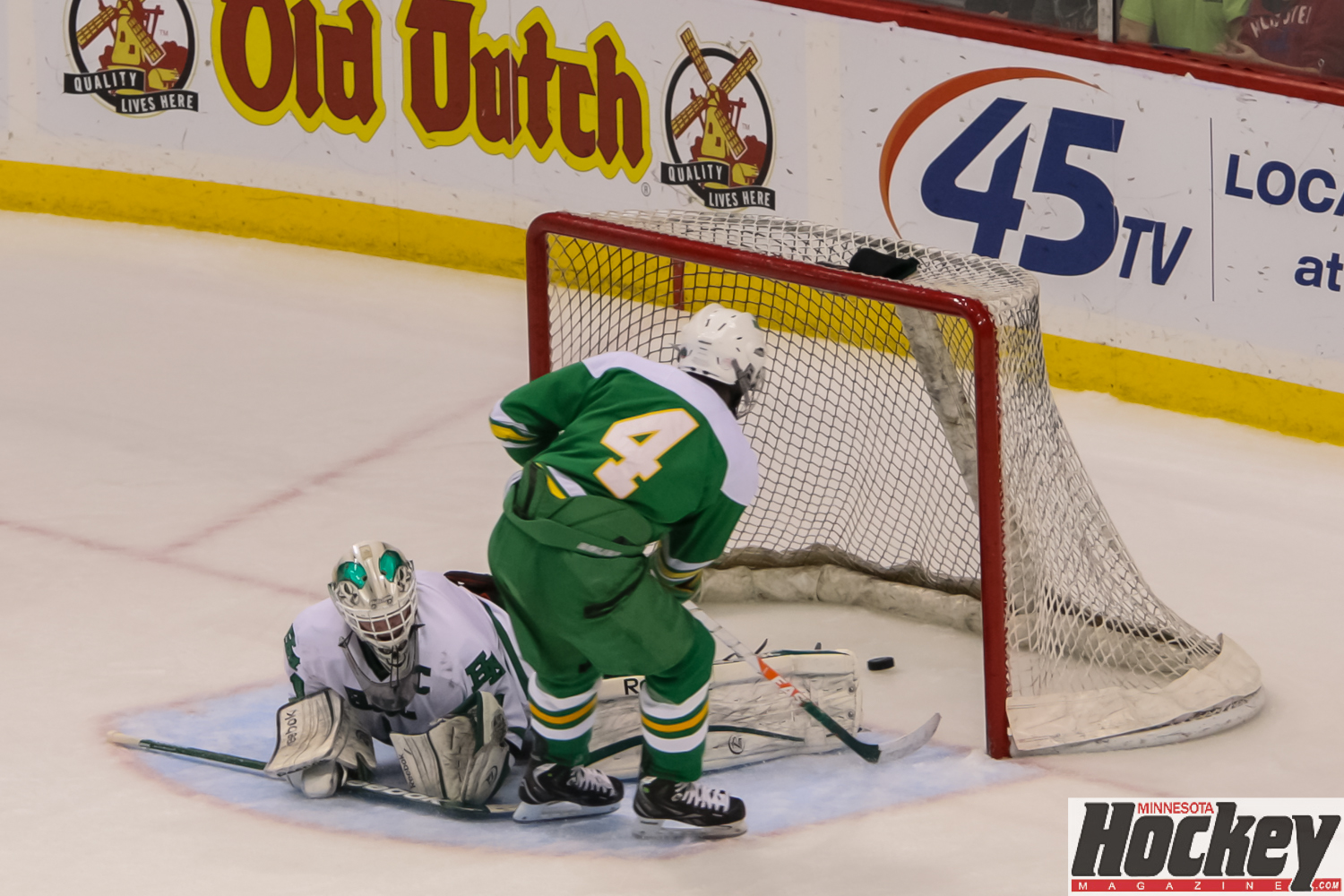 This week’s Class AA top ten has a new team at the top spot and welcomes in two more teams to the mix as things continue to shake up.

The hottest hockey team has been rewarded with the top ranking in the MinnesotaHockeyMag top ten this week. Ignored mostly by the media for most of the season, the Panthers are finally garnering attention beyond the MNHockkeyMag. The Panthers are winners of 9 straight and are 14-0-1 in their last 15 games and that includes wins over teams that have resided in the top ten that include Eden Prairie (7-0), Hill-Murray (3-0), Bunrsville (5-4 ot), and Eastview (3-0) this past week. Three of those wins are shutouts and that speaks volumes. They are in control of the South Suburban Conference title and are expected to be the prohibitive favorite in the Section 1AA that plays out in a few weeks. Many things can happen. This team continues its structured defensive stye and creative offensive ways. With six shutouts and averaging just 1.95 goals against, they have great offensive numbers averaging just under 5 goals a game. A healthy Bloomington Jefferson team will provide a test for the Panthers this week and they have the rivalry game with the Lakeville South Cougars on Saturday. If history has anything to do with it, once a team lands in the top spot of the rankings, it quickly falls from grace this season. For the Panthers, they will work to maintain that top spot another week and change that trend.

The Hornets kept pace in the Lake Conference this week in downing a pair of teams they were expected to beat. Both the Hopkins Royals and Minnetonka Skippers presented different checking schemes on the Hornets who fought through them to pick up back-to-back wins. Edina is like the Energizer Bunny who indeed keeps going and going. This team is always hard to play against and one gets the feeling they are turning the corner to becoming a legitimate State Title contender once again. At this stage, the Hornets took care of business this past week and with the strength of a win and tie against Wayzata and a split with Hill-Murray are slotted ahead of both teams in this week’s rankings at number two. The Hornets are 9-3-1 against top teams that have been ranked in the top ten of the MHM AA polls this year and that includes Breck who have been at or near the top of the A rankings this year. The overall body of work places the Hornets in the second position this week.

The Pioneers were defeated by the St. Thomas Academy Cadets by a score of 4-2 that opened up a potential tie for the Classic Suburban Conference. The teams have split their two games this year. The Cadets then went on to get lit up by Breck that will keep them out of the top ten for those of you wondering. The Pinneers only fall one slot as they have defeated the Trojans and split with the Hornets this season. The Pioneers are 6-3-0 against top ten teams so far this season and in lieu of Edina’s impressive 9 wins against top ranked teams, the Pioneers stand at number three which was a decision that includes a split with the Hornets. A rivalry game with South St. Paul is on the schedule this week and the high scoring Oliver’s and North High School invade Aldrich Arena.

The Trojans and Hornets boast identical records through 19 games this season and share the top spot of the Lake Conference. Wayzata is a defensive juggernaut allowing under a goal an a half against at 1.42 per game. Their penalty kill is stifling at 92% and they play the game as disciplined as any team in hockey. Pat O’Leary’s team limits its mistakes and takes advantage of their opponents as a crisp winning formula. They are on a run of 3-0-1 since losing at Hill-Murray on January 9th. That loss places them one spot behind Hill-Murray coupled with their 0-1-1 record against #2 Edina. Two more Lake Conference games are on the docket for the Trojans and both are also Section 6AA opponents. As they work to wrap up the #1 seed in the 6AA, the Trojans are also working on a potential conference title as well.

This is a legitimate top five team and have been most of the season. If it weren’t for the three losses at the Edina Holiday Classic, this team is perfect this year. They have just six games against top ten ranked teams at some point in the season in the MHM rankings and are 3-3 in those games this year. With a spit against Edina and wins against teams in the bottom half of the rankings, the Elks do not have a strong enough resume yet to catapult themselves higher in the rankings. They are a Section 7AA contender and have the style of play that is suited for the post season and that is a game that starts from the blueliners and comes forward as a group of five. It is all complimented with terrific goaltending. The Elks have been perfect in the Northwest Suburban Conference and will be looking to keep it that way with two conference games this week an the offensive minded BSM Red Knights in the house on Tuesday for what should prove to be an entraining tilt.

The Blaze slithered past Eastview with an extra-attacker and overtime goal.  They coupled that with a win over the Rosemount Irish to claim second place in the South Suburban Conference standings. They tied the surging Eden Prairie Eagles and are 6-1-1 in their last eight games. A test with Eagan stands before them this week and Apple Valley rounds out the schedule for the Blaze. They have had a tough schedule this season and are 6-5-1 in 12 games against teams ranked in the top ten. A few more wins and they would be in the top three of the rankings.

It has been four straight wins for the Blaine Bengals since their 6-4 loss to Elk River. The Bengals are 1-3-1 against top ten competition and one of their three losses was to East Grand Forks who are a top Class A team. Their schedule is not peppered with as many top ten match-ups as the teams ahead of them in the top ten and coupled with their losses to those teams, they stand in the 7th slot for the second straight week. The Bengals are favorites in the Section 5AA and have the depth to do damage if they earn the berth to the State Tournament.

The Hounds continue their winning ways as they are 8-1-1 in their last ten games and are 4-3 against teams that have been ranked the top ten. Of late they have been spotty in their victories, with close games against teams that one would think they could handle. With that said, they continue to win and as usual, special teams are key to their success. A power play that connects at a scoring 39% and kill penalties at 89%. They continue their series through the Lake Conference as they take on Minnetonka this Tuesday and then host Lakeville South on Thursday.

Welcome back to the Eden Prairie Eagles. They were standing on the fringe of the Class AA MHM top ten for several weeks and have put together a solid run of games and are rewarded with the #9 ranking. The Holy Family Catholic loss to Roseau and an Eastview loss last week to Lakeville North tossed them out of the top ten for this week. The Eagles are 3-1-1 in their last five and 3-0-1 in their last four games. The Eagles were in a tough stretch where they went 2-5-1 over an eight game stretch and have gotten back on track. They are 4-5-1 against top ten teams this week and will be facing the Edina Hornets in a pivotal Lake Conference game at Breamar Arena this week.

Major deliberation preceded the number ten team and it was awarded to the White Bear Lake Bears who had been flirting with an appearance in the MHM top ten. We are certain Executive Editor Brian Halverson is jumping with joy over this pick. With that said, the teams considered on the short were Holy Family Catholic, Roseau, and Cretin-Derham Hall. The Bears had a terrific weekend with a big win on Hermantown by a score of 4-1 and then the next day, it was a steady 4-1 win over the Grand Rapids Thunderhawks. With a 2-3 record against previously ranked opponents the Bears thrust themselves in the mix with both wins coming this past weekend. Their overtime effort, a 5-4 loss to the Hill-Murray Pioneers has been well respected as well.