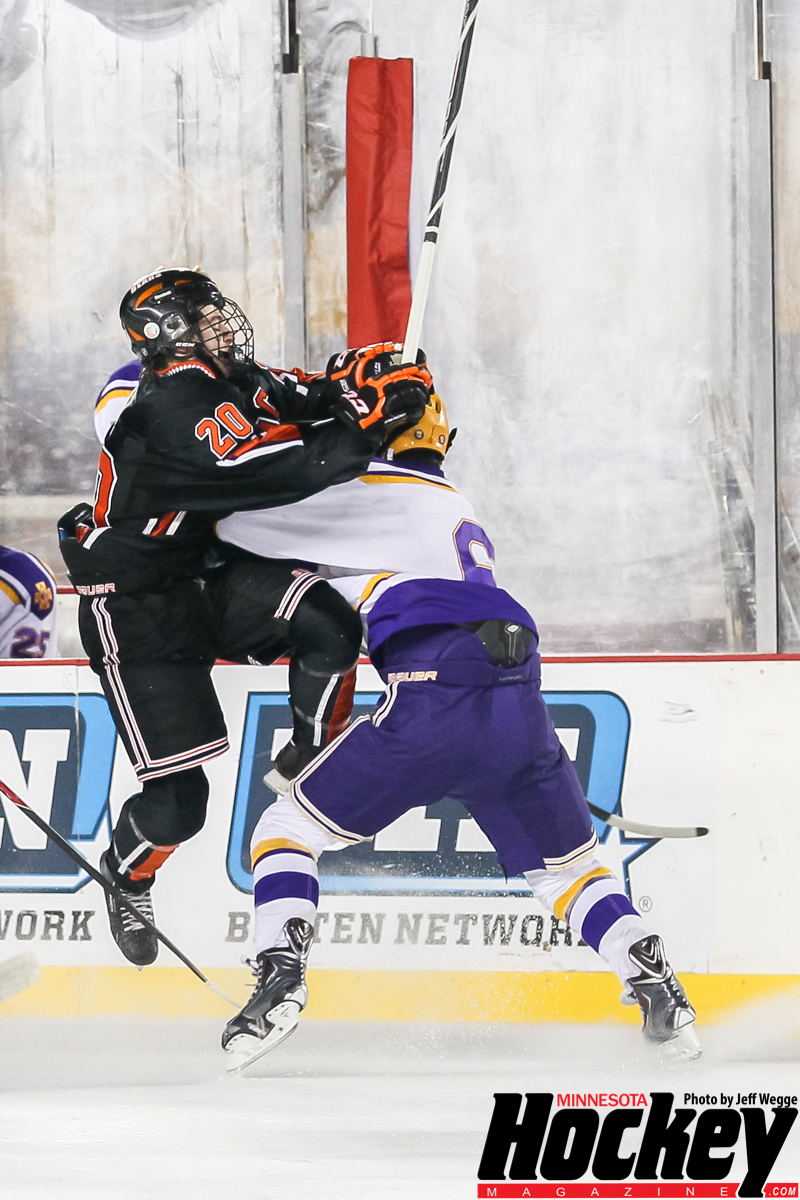 The top three teams remain unchanged in this week’s MHM Class AA top ten rankings.  It was rough week for teams in the mid-section of the top ten as Wayzata, Burnsville, Blaine, Duluth East, and  Elk River all lost.  Not much changes this week however, as most of those team’s losses were to teams ranked ahead of them.  Duluth East lost twice this past week and that knocked them from the top ten.

The Panthers continue their winning ways as they eked one out against the Duluth East Greyhounds in overtime.  They closed out the week with a 4-3 victory over the Eagan Wildcats that improved the Panther conference record to 15-1-0 and is good for the conference title.  They have one game left against Prior Lake and if North can pick up the win, they would close out the regular season with a 19-0-1 run.  Currently, the Panthers have won 13 in a row since their tie with the Blaine Bengals on December 27th.  Wins over Duluth East, Burnsville (2), Eastview, Eden Prairie, Hill-Murray, Eagan (2) and Bloomington Jefferson (2) are enough to dispel the difficulty of schedule argument that is floating around and with their last loss coming on December 7th, to St. Thomas Academy, the Panthers have earned the top spot for the third straight week.

The Hornets are in the midst of a seven game unbeaten streak (6-0-1) and have been getting it done in the Lake Conference.  A huge win over Wayzata gave the Hornets sole possession of first place with two games remaining.  They were in post season form in a well played game as they took down Hopkins 4-0.  The Hornets close it out with a pair of road games this week.  The first tilt is at the difficult to play Pagel Activity Center against the Minnetonka Skippers and  the season finale is against the Eden Prairie Eagles on Saturday at the EP Community Center.  Contributions have been felt from all three lines and that will be key to a potential State Tournament run.  This team is playing very well right now and things are coming together as the seniors are playing bigger an the underclassmen are stepping up the effort.  Edina’s goaltending has been rock solid as Andrew Rohkohl has not allowed more than one goal against in a game since their 3-3 tie with Wayzata and that is a span of six straight games.

The Pioneers have won 11 of their last 12 games.  The loss came to St. Thomas Academy on January 23rd. In that span, Hill-Murray has wins over four ranked opponents  that include Wayzata (3-2), Edina (6-1), White Bear Lake (6-5 ot), and Blaine (4-3).  It certainly helps improve their case at the number three position.  The Pinoneers do not top Edina in this ranking as they split with them and lost to Lakeville North.  Edina’s conference schedule and strength of schedule is the deciding factor between the two and three slot.  Hill-Murray closes out the regular season campaign with a game at Tartan and then host the Moorhead Spuds on Saturday.  This team is indeed a State Title contender although, they will have to work to get through the Section 4AA this year especially with the surging White Bear Lake Bears and Roseville Raiders lurking.

A loss to he #2 ranked Edina Hornets does not move the Trojans down a spot in this week’s top ten.  They played a fantastic high school hockey game and a win wold have moved them up in the rankings.  The Trojans bounced back with a 6-0 win over the Minnetonka Skippers this past Saturday.  Games against Totino Grace and Hopkins round out the regular season as they prepare for the Section 6AA tournament and will likely be the top seed.  They are 7-3-1 in their last ten games and have been a steady team all year long.

It has been an interesting year for the Blaine Bengals who lost last week and actually moved ahead of the Burnsville Blaze because Burnsville suffered a loss as well.  The Bengals loss was to the #3 Hill-Murray Pioneers and the Blaze fell to  Bloomington Jefferson, a fine club in their own right but not a top five team at this point,  3-2 in overtime. The Bengals have quietly carved through the Northwest Suburban Conference and only have four losses on their ledger, all to top ten teams and yes, that includes East Grand Forks the top team in Class A.  A busy week that featured four games in six days.  Blaine picked up a big win over Elk River/Zimmerman that solidified the Bengals hold on first place in the conference race. The Bengals are 9-1-0 in their last ten with their most recent loss at the hands of the Hill-Murray Pioneers last week.  The face the surging Andover Huskies and the tough to play Maple Grove Crimson this week.

An overtime loss to the once ranked Bloomington Jefferson Jaguars stunned the Blaze and dashed any hope of catching the Lakeville North Panthers for the South Suburban Conference title.  The Blaze are 7-2-1 in their last ten and have been consistent defensively all year long, especially in their last ten games where they have posted 2.30 goals against average.  The Blaze are 6-6-1 in games against top ten opponents with a split against Edina, loss to Wayzata, loss to Hill-Murray and a pair of losses to Lakeville North that keeps the Blaze beneath those teams as they have a 1-5 record against the top four teams this year.  A gritty and underrated Bloomington Kennedy team (11-10-0, 3-5-0) are on the schedule this week and they finish up the regular season against the Lakeville South Cougars.

It has been a steady rise for the Bears this year and they land at #7 this week up a notch from #8 as the Duluth East Greyhounds fall out of the top ten with a pair of losses.  For the Bears it has been a seven game winning streak as they have been cleaning up in the Suburban East Conference.  The first two wins to kick off the streak were against the highly regarded Hermantown Hawks (4-1) and the Grand Rapids Thunderhawks in back-to-back efforts that started the ball rolling.  During that seven game streak the Bears have out-scored their opponents 40-12.  Jake Wallin has been lights out and he has amassed (9g-13a-22pts) during that seven game streak.  He can present a major problem with the Section 4AA as he now has (38g-31a-69pts) to lead his club and all Class AA scorers.  The Bears have a tough game at Forest Lake on Tuesday and a win clinches the SEC title for the Bears.  A loss sets up a major showdown for the conference title with the Cretin-Derham Hall Raiders on Thursday.  That game can be seen on the MNHockeyMag.com streaming simulcast with Sports Radio 105 The Ticket.

Despite a loss to #5 Blaine, the Elks move up.   A number of teams lost ahead of them as well.  A three game week is on tap for the Elks with the Northwest Suburban Conference Schedule closing in a fury.  The Elks are 2-3-0 in their last five.  At one point Elk River reeled off eight straight wins and have hit the rough patch of late.  They have three winnable games this week and could finish with an 18 win campaign which is very impressive.  Their record against top ten teams is 3-4-0 this season.

The Lightning are 6-3-1 in their last ten games including a 3-2 win over Lakeville South and a 1-1 tie with Rosemount.  The Lighting have teetered in and out of the top ten and they land back this week at #9.  They have two difficult games this week with Eagan and Prior Lake to close out the season.  They are an impressive 7-0-1 in Section 3AA games and 9-5-1 in the South Suburban Conference and are in third place behind #6 Burnsville and #1 Lakeville North.

The Raiders maintain the tenth spot despite a loss to the Roseville Raiders by a score of 4-1.   Cretin-Derham Hall owns a 2-2 record against ranked teams this season and have two more tough games to complete their schedule.  They are 6-3-1 in their last ten games including 4-1-1 in their last six affairs.  On the schedule this week is a  non-conference affair with the Red Knights on Tuesday and that game can be seen live on the MNHockeyMag.com.  The Raiders also battle White Bear Lake in a huge Suburban East Conference game on Thursday.  With a White Bear Lake loss to Forest Lake, the game would be a winner take all for the conference title.   It can be seen streaming live on the MNHockeyMag.com and heard simulcast on Sports Radio 105 The Ticket.  The Raiders are an impressive 10-0 in Section 3AA play.