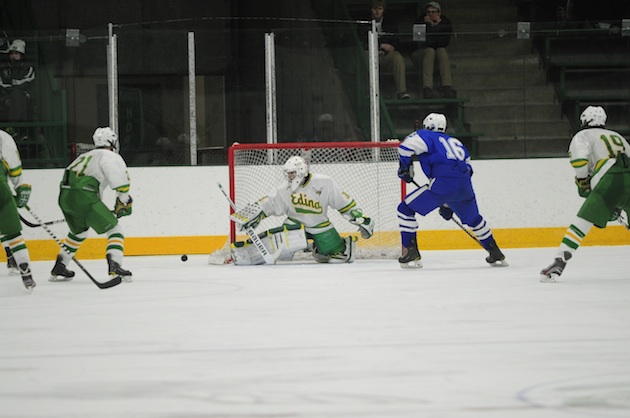 The 2013-14 MHM final top ten rankings feature a new team at the top spot as the Edina Hornets reclaimed number one.  Forest Lake claimed the 10th spot in the rankings this week with little change in the rest of the top ten.  Be sure to check back with our Minnesota Hockey Magazine sectional preview that will post later in the week.

The Hornets earned the #1 seed in the Section 2AA and are playing some terrific two-way hockey.  Edina is in State Tournament form, as they always are this time of the year.  This group posted another 20 win season against just four losses.  Consider Edina’s run through the Lake Conference that was near perfect (7-0-1) as a statement to where they are at this point of the season.  Mr. Hockey candidate Tyler Nanne is playing a “next level” brand hockey that would be expected of his candidacy.   Miguel Fidler will end up with a solid post-secondary hockey playing options as he is the best player on the ice most nights.   Edina’s 46 goals against are second fewest in Class AA hockey setting Edina up for what could be a deep run into March.  The Hornets were a sizzling 13-3-1 against teams that were ranked in the top ten of the MHM at some point this season further stating they take on all comers and have been impressive and why they are number one to close out the regular season.

The Panthers closed the season with a tough 1-0 loss to the Prior Lake Lakers.  They will have to wait 11 days to avenge that loss when they open the Section 1AA playoffs this Thursday against the Dodge County Wildcats.  As the number one seed, the Panthers are the favorites to advance to the State Tournament however, Farmington or Lakeville South will be difficult obstacles for the Panthers.  Congratulations are in store for the Poehling brothers, Jack, Nick, and Ryan for committing to St. Cloud State this past week.  The Panthers are a deep team and it is fair to say the Poehling trio are the heart and soul of the Panthers.  Defensively, the team allowed just 48 goals against this season that tied them for fifth among Class AA teams this season.  The Panthers won the South Suburban Conference title this year and were ranked in the top spot of the MHM rankings three weeks in a row before falling to the second slot this week.  The Panthers were 8-2-1 against teams ranked in the MHM top ten at some point this season.

Like the Edina Hornets, the Pioneers are a team that is always there in the end and here they are again.  Each year, Bill Lechner’s teams graduate a number of talented seniors and the wonder of the hockey world is how in the world are the Pioneers going to duplicate last season’s effort.  That question is answered each year and his team is poised to make a steady run.  Mr. Hockey finalist Mitch Slattery has a balanced group of underclassmen that will provide difficulties for the Section 4AA.  The Pioneers shared the conference title this year with St. Thomas Academy and were an impressive 8-3-0 against teams that have been ranked at some point in the MHM top ten this year.

The Trojans have stepped out to the front of the pack in the Section 6AA and earned the top seed.  They are in good position to make their second straight State Tournament bid and lost just once in their last ten games (8-1-1) .  Wayzata enters the playoffs on a three game winning streak that includes outscoring their opponents 19-1.  They have been ridiculous defensively leading the Class AA teams in goals against with just 32 against in 25 games.  The next closest team is Eagan with 45.  Goaltending and special teams are what is needed to be successful at a championship level.  The Trojans have been solid against top ten teams posting a 7-5-1 record.  That is the fewest wins among the teams ahead of them and the most losses which slates them in the fourth position.

The Blaine Bengals surged their way to another Northwest Suburban Conference Championship and a top seed in the Section 5AA.   They also boast a Mr. Hockey finalist in Tyler Cline and have a veteran crew up front and on the blue line.  Their 137 goals in 25 games is impressive and is tied for second with Hill-Murray among Class AA teams.  Their 58 goals against is stingy and often overlooked.  They should line up to be a force in the playoffs and considered a State Title contender with 15 seniors on the roster.  The Bengals own a 3-4-1 record against MHM top ten teams this season, a number that needs to be placed higher.

The Blaze have been a great story this season and are on the short list of Section 2AA title contenders this season.  A 3-2 overtime loss to Bloomington Jefferson a week ago stopped their momentum at least for the moment.  The Blaze bounced back with a nice wins over a tough Bloomington Kennedy team and Lakeville South to finish the season strong.  They were 6-5-1 against teams ranked in the top ten of the MHM this season.  The Blaze have the talent and patience positionally to go deep in the playoffs and succeed in the section playoffs.

Winners of the Suburban East Conference title, The White Bear Lake Bears have the Class AA’s leading goal scorer in Jake Wahlin (39g-31a-70pts) and are on a (8-1-0) run over their last 9 games recovering from a 3 game losing skid in the middle of January.  With 113 goals for and just 64 against, the Bears bring a nice mix to the table and can not be ruled out for a section title.  They posted a 3-4-1 record against teams that have been ranked in MHM top ten rankings this season including a heart-breaking 5-4 overtime loss to the Hill-Murray Pioneers.

The Elks stumbled for a bit after they had a roster shake up and have righted the ship to the tune of winning four straight and solved a minor goal scoring issue by outscoring their opponents 19-4 in those four game.  They have a Brimsek Award finalist in goal with Mac Berglove and a deep defensive corps that defends in their own zone well.  With 108 goals for and only 58 given up, the Elks are a big time Section 7AA contender.  They are 4-4 against MHM top ten teams this season including a 3-2 win over top seeded Duluth East on December 10th.  Much has changed over that time and with what can be argued the deepest section in the state, the 7AA title is up for grabs this year.

Talk about cardiac kids, the Hounds have played in 5 overtime games this season posting a 3-1-1 record in those contests.  They have a 6-2 record against Section 7AA teams this year and are 5-4-0 against top ten MHM teams.  The Hounds have a game changing power play and teams can not put them on it as the Hounds execute at 42% efficiency if they plan on being successful.   29 of their 89 goals have been scored on the power play and they are very tight defensively allowing just 50 goals agains this season.  Duluth East kills off 90% of the penalties whistled agains them this year which is impressive as well.

A hearty welcome to the Forest Lake Rangers for earning a spot in this week’s MHM top ten.  They close it out in style as this marks the final regular season rankings.  A win over White Bear Lake in the final week helped propel the Rangers in the top ten for the first time this season.  They posted a 4-3 record in Section 7AA games and are four game winning streak heading into the post season with their game against the Grand Rapids Thunderhawks.  The Rangers posted a 2-3-2 record against MHM Top Ten teams this season.