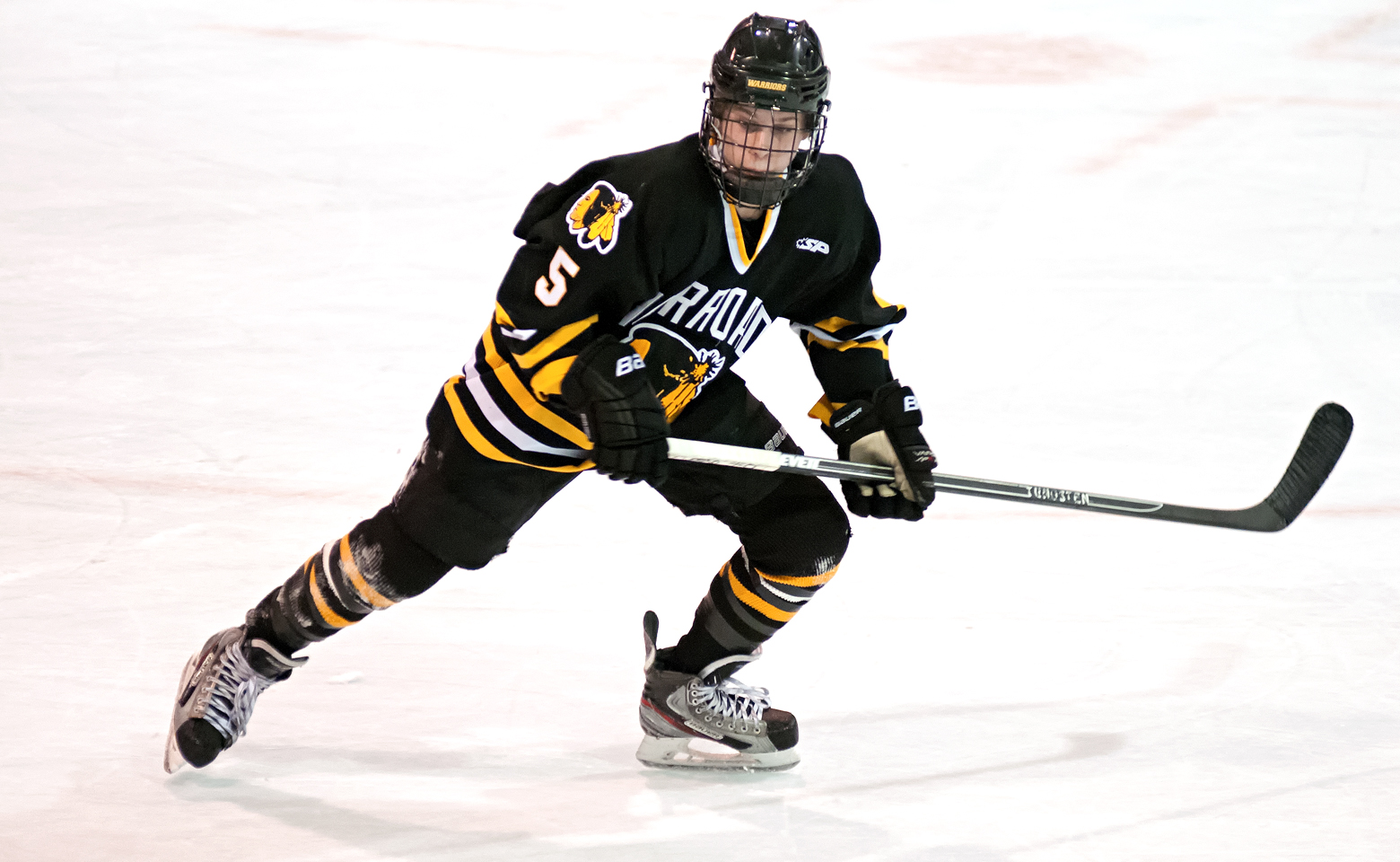 For the most part, the rich got richer in Class 1A last week.

It was a big stretch of victories for the top 10 teams, as the programs combined to go 15-2-0 in 17 games (those that weren’t postponed due to the arctic blast early last week, of course). One of those losses, however, was handed to our No. 1 team, Breck, in a 4-3 overtime decision at Class 2A Moorhead. So was that enough to knock the Mustangs from the top spot?

Comparing results, losses and other factors, coach Les Larson’s club hangs onto the top spot by the narrowest of margins.

One of the few losses suffered by our top 10 teams last week was by Breck, which fell in a 4-3 overtime game at Moorhead Saturday night. But looking at the body of the Mustangs’ work helps them retain the top spot in the rankings. All three of their losses have come to perennially strong Class 2A programs (4-1 to Edina, 2-1 to Duluth East and 4-3 at Moorhead), whereas they are a perfect 7-0-0 against Class 1A teams, outscoring them by a combined 46-9. That said, Breck is just 2-3-0 in its last five games and edged St. Paul Academy by a single goal in its other game last week — the same team Duluth Marshall beat 9-1 later in the week. It’s up to the top scorers such as Michael Orke (11-13-24), Chase Ellingson (6-18-24) and Mark Sharp (10-8-18) to power the offense after a slow week.

East Grand Forks is another team that is being pressured for its No. 2 ranking by the two teams immediately below it. The Green Wave are winning and doing it with a dominant defensive effort. They’ve allowed more than two goals just once this year, already have 10 games in which they’ve allowed one or none, and average only 1.36 allowed per game. It’s a tribute to the fine veteran defensive corps led by Colton Poolman (2-7-9), Eddie Eades (2-2-4), Taylor Brierley (2-5-7) and Tye Ausmus (2-1-3). But the East Siders just aren’t getting much offense, either. They average 3.14 goals per game and no one has more than Tanner Tweten’s eight goals. A game this Tuesday night at Roseau will be an interesting measuring stick, as rival Warroad just beat the Rams 6-4.

Since losing to Eagan in the South St. Paul Premier Tournament final over the holidays, the Hawks have been on a roll. Three straight victories by a combined 22-2 score over three perennially strong programs (Duluth Marshall, International Falls and St. Cloud Cathedral) have shown that Hermantown may deserve to jump into the top spot in the rankings. Like top-ranked Breck, the Hawks only losses have been to Class 2A powers (6-1 to Wayzata and 4-1 to Eagan). Scott Wasbotten (10-11-21) has also gotten hot, with four goals and five assists in the three blowout victories. Another thing to keep an eye on is the goaltending battle, senior Jace Thomas (6-0-0, 1.12, .953) got the nod in all three victories over All-State Adam Smith (5-2-0, 2.79, .875) and he’s responded well. 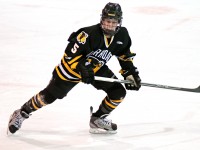 Featured Image:
In a pair of victories last week, Warroad’s Kobe Roth scored a combined seven goals and leads the entire state in both goal-scoring and points.
(Photo by Tim Kolehmainen)

It was a good week to be a Warroad fan. It was a better week to be Kobe Roth (31-30-61). After giving his verbal commitment to Minnesota-Duluth along with teammate Jared Bethune (24-35-59), the shifty junior rocked the northwest with seven goals in two victories over Roseau and Crookston last week. He started with four goals against Roseau, scoring at least once in each period, then had a hat trick against Crookston, as did Bethune. Meanwhile, all linemate Kyle Sylvester (20-35-55) did was pick up a goal and six assists in the two games. Fire wagon hockey reigns supreme with that top Warroad line, which features the top three point-getters in the entire state.

We said last week that New Prague wasn’t going to blow any teams out, but that the tough Trojans just know how to grind out victories this year. They proved it again last week, beating both opponents by a single goal. That’s actually four straight one-goal wins for New Prague, which is 6-2-2 in games decided by one goal or fewer. Augie Isaacson (11-15-26) scored twice in the win over Holy Angels, including the game-winner with just under four minutes remaining and had one of the team’s two goals against Chaska. He’s tied for the team lead in goals with Austin Kilian (11-8-19) and in points with Seth Kriha (5-21-26).

West continued its unbeaten run through the Big 9 Conference last week, but it wasn’t easy as both Rochester Mayo and Century slowed down the Scarlets’ potent offense. In beating Mayo 2-1, West needed a goal from leading scorer Derek Frentz (15-23-38) with 27 seconds left to earn the win, despite outshooting the Spartans 35-17. They also outshot Century 46-15 but held a slim lead until Frentz again scored late in the third period to stretch it out comfortably. But as good teams do when snakebitten, coach Curtis Doell’s squad tightened up defensively. Jake Spiess (7-1-0, 1.36, .902) stopped 16 of 17 shots against Mayo and Conor Wollenzien (6-1-0, 1.29, .936) made 14 saves on 15 shots against Century.

Duluth Marshall avenged a loss in its holiday tournament to Superior (WI), beating the Spartans 4-2 to open last week, then posted an impressive 9-1 rout of St. Paul Academy, which had just played a one-goal game with top-ranked Breck. The Hilltoppers hope the transitive property works in their favor, as they travel to Breck this Thursday. Against Superior, Lane Krenzen (4-6-10), Jack Dodd (6-9-15) and Peter Lenz (6-4-10) scored to erase a 2-1 deficit as Marshall outshot the Spartans, 33-21. That scoring punch continued against SPA, as Lenz scored twice more and Luke Dow (6-12-18) had two goals and two assists. That kind of scoring balance is key, as the ‘Toppers have a strong overall lineup led by Luke Pavelich (12-11-23), but no true superstars.

All right, it’s fair to admit that Luverne doesn’t have as strong a schedule as the teams above it in the rankings. That said, there’s something to be said for passing every test along the way. The Cardinals remained the lone unbeaten team in the state last week, including winning 4-0 against Willmar, a game many pointed at as a possible stumbling block for Luverne. But Logan Norman (14-27-41) scored twice and Kendall Meyer (11-0-1, 1.27, .954) stopped all 31 shots for the shutout as the Cardinals kept on rolling. While the offense of youngsters Chaz Smedsrud (23-30-53) and Jaxon Nelson (20-22-42) and seniors Norman and Gunnar Olson (16-17-33) gets most of the attention, Meyer has been outstanding in goal as a calm veteran presence.

Orono hit the road last week and managed a pair of victories to keep pace with the rest of the top 10. Joey Luedtke (5-10-15) more than doubled his goal total on the season with three in the two victories. Getting offensive contributions from both top lines is key for the Spartans, as Jake Flemmer (9-7-16) leads the team in both goals and points. Goaltender Jonathon Flakne (9-3-0, 1.25, .941) continued to stymie opponents, as he made 13 saves on 14 shots against Kennedy and 27 of 25 against the Dragons. Much like New Prague, Orono doesn’t jump out at you with big point totals, but the Spartans know how to win.

That’s three straight losses and five in six games for St. Cloud Cathedral after being shut out at Hermantown last Friday. So whey are the Crusaders still ranked in the top 10? Look at the competition. The last three games have been on the road against the No. 2 (East Grand Forks), No. 4 (Warroad) and No. 3 (Hermantown) teams in Class 1A. The losing streak very well might hit four Tuesday night, as Cathedral travels to No. 1 Breck. The recent win-loss record doesn’t show it, but Cathedral is a good team hitting a very tough stretch of its schedule. Getting its offense going is key to a resurgence, as in those three losses, Cathedral has just one total goal — from Brady Johnston (7-2-9).