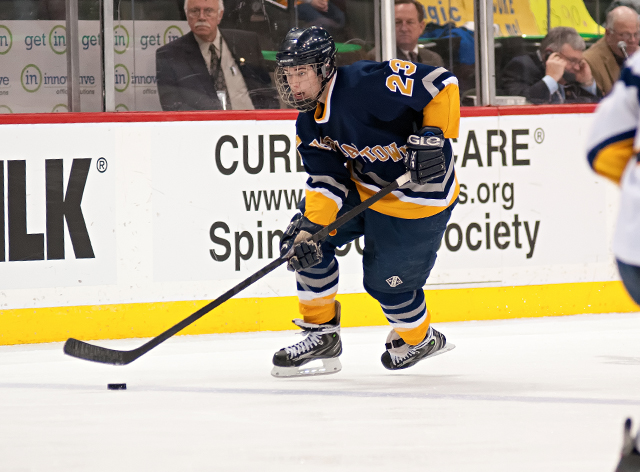 In more ways than one, Duluth Marshall threw a significant monkey wrench into this week’s Class 1A rankings. The Hilltoppers did something no other Class 1A team had been able to do this year — beat previously No. 1-ranked Breck — but then dropped their next game to Roseville. It was Marshall’s sixth loss on the year, albeit several of them came when the team was not at full strength.

The big questions to come out of the week revolved around the Hilltoppers. How high to rank them? And how far to knock Breck?

The four-time Class 1A runners up jump over two teams to get to the top of the rankings for the first time this season. Hermantown won its only game of the week, beating a tough Class 2A team (Bemidji) by a 6-2 margin with six different goal scorers and 24 saves from goaltender Adam Smith (5-2-0, 3.09, .882). That’s the Hawks’ depth on display and a big reason they vault to the front. Coach Bruce Plante’s team has only lost to a pair of Class 2A powers (6-1 to Wayzata on opening night and 4-1 to Eagan in the final of the South St. Paul Premier tournament) and have beaten all nine Class 1A teams they’ve faced by a combined 64-14 score. Ten different players have scored at least three goals, led by Nate Pionk (13-15-28) and 15 have at least five points, paced by Ryan Kero (12-16-28) and Pionk.

Class 1A’s best defensive team certainly had a strong case to move up into the No. 1 slot, but remained at No. 2 for now. The Green Wave actually allowed a handful of goals against Class 2A Roseau, but still easily beat the Rams by a larger margin than rival Warroad (8-3 vs. 6-4). It was just the second time the Green Wave have allowed more than two goals all season, as they average just 1.38 goals against. Junior Josh Weber (9-1-1, 1.48. ,907) seems to have taken hold of the starting job in goal, as he’s started the past six games. Coach Tyler Palmiscno is happy to have Dixon Bowen (6-2-8) back from injury, as well, as he’s scored five goals in the last three games. If the Green Wave’s offense begins to surge, they’ll be tough to beat.

Due to more weather cancellations, Warroad had just one game last week but it was a big victory, 4-3 over Class 2A Moorhead. The top line of Kobe Roth (32-31-63), Jared Bethune (24-39-63) and Kyle Sylvester (22-36-58) again led the charge as it has all season, scoring three times and adding nine total points. Roth scored the game-winner from Bethune and Sylvester midway through the third period and goaltender Adam Burke (14-2-1, 1.75, .911) had 29 saves to make the lead stand up. Hard-hitting defenseman Blayke Nelson (3-11-14) got into the fun, as well, scoring a goal and adding two assists. The Warriors have a big trip to Duluth coming this weekend.

The Mustangs’ recent trend of losing one, winning one finally caught up to them in the rankings this week with a 3-2 defeat to Duluth Marshall. Over its past eight games, Breck is 4-4-0 and has neither a winning nor losing streak greater than one game. With the other “big three” winning convincingly last week, coach Les Larson’s club falls all the way to No. 4 in the rankings, just ahead of the team it lost to. Sandwiched on either side of the loss to Marshall, though, were big wins over St. Cloud Cathedral and Minneapolis by a combined 16-3 score, showing Breck’s power. Mark Sharp (13-11-24) had three goals and three assists in the two games and leads the team in goals. Breck has a big week coming up with games against Class 1A rivals Totino-Grace and Blake and a showdown with former rival St. Thomas Academy.

So, the question is whether Duluth Marshall is the potential state championship contender that just beat Breck or the middling team that has lost to St. Cloud Apollo and struggled over the holidays in its own tournament. The answer? Both. The Hilltoppers are certainly a state title caliber team, but one that had been searching for consistency in the wake of injuries. Now with the team mostly healthy, coach Brendan Flaherty is looking to plug all the pieces in the right places. It’s a big week coming for the Hilltoppers, who will be tested by Hibbing/Chisholm and visits from two of the northwest’s best in Warroad and Thief River Falls. They’ll need an effort like the second period at Breck, when Lane Eliason (6-6-12), Anthony Miller (6-4-10) and leading scorer Luke Pavelich (13-12-25) all scored to stake them to a 3-0 lead.

Two more games, two more victories for a surging New Prague team last week. The Trojans have now won eight straight games since a 2-1 loss to Eagan in the semifinals of the South St. Paul Premier tournament. But last week, coach Chris Lonke’s team powered up its offense. The 10-spot against Red Wing on Tuesday was the team’s highest output of the season and its 16 goals was the most over a two-game span. Most encouraging, the goals came from multiple sources. Lucas Binger (7-4-11), Alex Gregor (13-11-24) and Augie Isaacson (14-20-34) scored two goals each against Northfield and Gregor and Seth Kriha (7-24-31) followed with a pair of goals against the Wingers. In all, eight different Trojans scored in the two games.

Northfield had a week to forget, as the Raiders fell big to both No. 6 New Prague and in an 8-2 loss at No. 7 Mankato West last Saturday. The Scarlets finally got their offense on track as Nick Campbell (15-15-30), Zach Erickson (5-2-7) and Max Mettler (9-20-29) each had two goals while leading scorer Derek Frentz (15-26-41) added three assists. It was the first time since the holidays that the Scarlets had exploded for a big offensive night. In the previous four games, they’d had just nine goals and went 2-2-0.

Ouch. Luverne returned to Southwest Conference play last week and drilled Redwood Valley, 16-0. The “youngster line” with eighth-grader Jaxon Nelson (24-23-47) and freshman Chaz Smedsrud (27-33-60) came up big as both players scored four goals each, while crafty defenseman Toby Sengvongxay (10-19-29) and senior Gunnar Olson (18-18-36) had two each. Luverne has built a powerhouse in the southwest corner of the state that seems a step above its conference this winter. We may see similar scores in the coming weeks until the playoffs begin.

Despite a loss to Class 2A Holy Family Catholic to start last week, Orono retains its No. 9 spot in the rankings. The Spartans responded to that loss — their first since a 5-3 loss to Rogers on Dec. 26 — with a pair of impressive one-goal victories over Delano (3-2) and Class 2A Hopkins (5-4). Joey Luedtke (7-15-22) scored with 20 seconds left to give Orono the tight win over Section 2A rival Delano, then Sam Challgren (5-12-17) scored twice against Hopkins and Luedtke had four points. Orono isn’t a high-scoring team, but the Spartans play tight defense in front of goaltender Jonathon Flakne (11-4-0, 1.94, .917).

Alexandria returns to the rankings this week with a nice 2-0-1 showing, beating St. Cloud Apollo and River Lakes and tying a tough Class 2A Brainerd team. Defense led the way, as the Cardinals allowed just four goals in the three games and are averaging just 2.06 goals per game. Senior goaltender Sam Goetsch (10-3-2, 2.06, .912) has been stellar, stopping 67 of 71 shots in the three games, while Ryan Marciniak (9-6-15) scored twice to improve his team-leading totals.