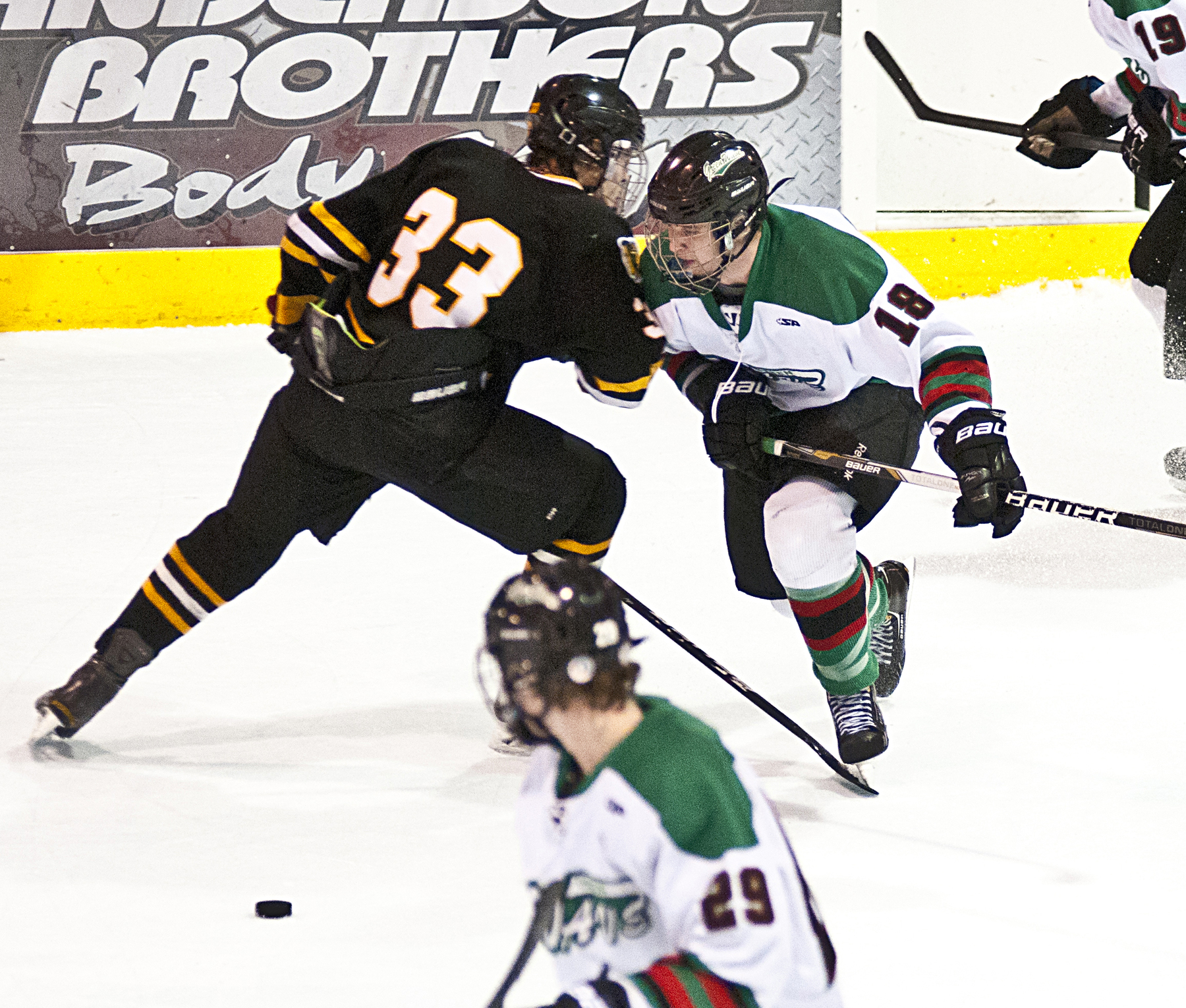 So, do you prefer your top teams with a touch of defense or a dash of offense? That’s the question that has to be answered when sorting out the Class 1A rankings as we enter the final week of January. Of course, the best teams offer a smorgasbord of both qualities and as such, are high in the rankings again this week.

For the third consecutive week, we have a new No. 1 team atop the rankings. Two weeks ago, Breck occupied that spot until being beaten by Duluth Marshall. Last week, Hermantown took over the No. 1 ranking but lost to White Bear Lake.

So who gets moved to the head of the class?

We’re going with the touch of defense atop the rankings this week. Only Luverne has a lower goals against average than East Grand Forks, which has stymied opponents at just 1.32 goals per game. But the Green Wave aren’t just keeping teams off the scoreboard, they’re keeping them from even getting shots toward the net. Opponents are averaging just 14.3 shots on goal per game and East Grand Forks has allowed more than 20 shots on goal in only three games all year and more than two goals just twice. Josh Weber (12-1-1, 1.37, .914) has been solid since taking over the full time goaltending position, but he has plenty of defensive help from the entire Green Wave team. Grant Loven (8-17-25) leads the East Siders in scoring, just ahead of Reed Corbid (10-14-24). Dixon Bowen (8-4-12) has also been streaking since returning to the lineup from injury.

And here’s your offensive treat up in Warroad. The Warriors have the most potent line in the state in juniors Kobe Roth (36-39-75) and Jared Bethune (29-45-74) and senior Kyle Sylvester (28-43-71). They’re the top three scorers in the state in either class and have carried the Warriors offense all season. Roth is diminutive, but as crafty and slick as any player in the state. He’s tough to track on the ice, let alone get a clean shot at him. Bethune is bigger and more of a power forward who also has great hands, as is Sylvester, who also plays with an edge to his game. Both Roth and Bethune recently gave their verbals to the University of Minnesota-Duluth. Lost in all that offense, though, has been a terrific defense anchored by Luke Jaycox (3-15-18), Nick Jaycox (6-10-16) and Blayke Nelson (5-11-16). Warroad only allows 1.75 goals per game, as well. A huge game looms this Saturday as the Warriors host No. 1 East Grand Forks.

It seems harsh to push Hermantown out of the top spot and down to the No. 3 ranking after a loss to Class 2A White Bear Lake. In fact, the Hawks’ only three losses have come to Class 2A teams, as they’re 11-0-0 against Class 1A teams and outscoring them 79-18. The Hawks play one team from each class this week, starting with a road game at rival Cloquet. But most interesting is Saturday’s home game against Totino-Grace, which has proven to be a giant-killer in recent weeks. The Eagles nearly cracked the top 10 this week and will provide Hermantown a great Class 1A test. The four-time defending Class 1A runners-up have four double-digit goal scorers in Ryan Kero (14-20-34), Nate Pionk (13-16-29), Scott Wasbotten (12-16-28) and Cole Koepke (13-7-20), showing their great balance. In all, nine players have at least 16 points and another five have between seven and nine points. Koepke, a sophomore, has surged recently, scoring six goals in his last four games.

What to do about Duluth Marshall? The Hilltoppers clearly are a strong team and one deserving of a top-five ranking in Class 1A. They’re deep, talented and seemingly have no weak spots on the roster.  In recent weeks, the ‘Toppers have defeated previously No. 1-ranked Breck and shut down highly-regarded Totino-Grace, Thief River Falls and St. Paul Academy. But they also have seven losses on the season and are just 2-2-0 in their last four games. Could it be the lack of a true go-to superstar on the roster? Someone who can take over a game singlehandedly when needed? Luke Pavelich (14-15-29) leads the team in scoring and has eight power play goals, while sophomore Luke Dow (6-17-23) has inherited a playmaker’s role. But as of yet, there is no Judd Peterson-type player jumping to the forefront. It could still happen, though, as Marshall is very young. Many top players are sophomores and juniors, such as Cam McClure (10-7-17), Derek Farrell (5-13-18), Jack Dodd (7-10-17), Jordan Fralich (5-12-17), Peter Lenz (6-6-12), Lane Krenzen (4-8-12) and goaltender Alex Murray (11-6-0, 2.53, .898).

Speaking of teams that have made the rankings more difficult in recent weeks, that certainly includes Breck. Just two weeks ago, the Mustangs were romping through all comers in Class 1A and seemingly looking indestructible. Sure, they’d lost to Class 2A powers such as Edina, Duluth East and Moorhead, but those were forgivable losses by a total of five goals. But in the last two weeks, Breck has also proven vulnerable to good Class 1A teams, losing 3-2 to Duluth Marshall and 3-1 to Totino-Grace. Perhaps Les Larson’s team has turned the corner again after tripping up Class 2A St. Thomas Academy (the three-time champions in Class 1A) in its last game, 6-3 last Saturday. Michael Orke (16-17-33) notched a hat trick in that game, including two short-handed goals, while Henry Johnson (11-5-1, 2.37, .910) stood on his head with 35 saves. They’re two of the veteran leaders for the Mustangs who will carry the team forward. The schedule isn’t difficult the rest of the way, so Breck should enter the playoffs on a roll and regain confidence.

The Trojans finally saw their 10-game unbeaten streak (9-0-1) end last Saturday in a 7-3 home loss to Hermantown. It was that stretch that vaulted New Prague into the top 10 and has kept it there despite the four-goal loss. That game was the first in more than a month that coach Chris Lonke’s team had allowed more than three goals. That defensive style is key to New Prague going forward, particularly with tough games against Farmington and always-dangerous Rochester Lourdes in early February. New Prague is still in the driver’s seat to gain the top seed in Section 1A, but Mankato West looms. Augie Isaacson (16-20-36), Seth Kriha (7-28-35), Alex Gregor (14-13-27) and Austin Kilian (15-9-24) power the Trojans’ offense, while Conner Wagner (13-3-3, 2.36, .901) has played nearly every minute in goal.

Next to Luverne, Mankato West has the most potent offense in the state in terms of statistics, as the Scarlets are averaging 6.28 goals per game. They padded that total last week with a 15-1 rout of crosstown rival Mankato East. They’re also the third-tightest defensive unit, allowing just 1.33 goals per game, and a perfect 12-0-0 in the Big 9 Conference. So what’s holding them in the No. 7 spot in the rankings behind New Prague? The Scarlet’s only loss to a Minnesota team, a 2-1 defeat at home to New Prague back on Jan. 4. Other than that one-goal loss and a one-goal defeat to Wisconsin powerhouse Notre Dame Academy on Dec. 28, Mankato West has been perfect. Derek Frentz (18-30-48) continues to lead the Scarlets in scoring, but he’s had plenty of help from Nick Campbell (16-21-37), Max Mettler (11-22-33), Cole Filler (12-13-25) and Galt Goettl (10-14-24).

The Cardinals posted another 10 goals in their one game this past week, surging past Morris/Benson Area. Luverne has three unique statistics in its favor to this point in the season: it’s the only unbeaten team left in the state (18-0-1); it’s the highest-scoring team in the state (7.26 goals per game on average); and it’s also the stingiest defensive team in the state (just 1.16 goals per game against on average). So why aren’t the Cardinals moving up from the No. 8 spot in the rankings? As in college football’s BCS system, it’s all about the schedule. Luverne is tucked in the Southwest Conference and in Section 3A, which have traditionally not been a hotbed of hockey. The Cardinals have taken care of business in that circuit, and also had an impressive showing in the Schwan Cup over the holidays, beating Spring Lake Park and Bloomington Kennedy and edging Class 2A St. Michael-Albertville in a shootout (the game counts as a tie). But outside of that, there are no other top-20 caliber teams on the schedule. That isn’t Luverne’s fault and we certainly like the Cardinals more than most ranking systems. The Cardinals are at least two lines deep and have talented defensemen and a veteran goalie in Kendall Meyer (12-0-1, 1.20, .956). It will be interesting to see the results if Luverne gets through to the state tournament.

The Spartans continue to win and continue to hang onto a top 10 ranking despite a push from some of the teams below them, such as Alexandria and Totino-Grace. Orono took care of business with a pair of relatively easy Wright County Conference wins last week, scoring five goals in each against Mound-Westonka and Hutchinson. Will Dittrich (3-1-4) had a big week, tallying the first three goals of his season, as did David McCuskey (7-6-13) with two goals and three assists combined. Getting contributions from the second and third lines is key to Orono’s success when it reaches the Section 2A playoffs — with Breck looming as the clear favorite. Another big game arrives this week with a visit to Delano, which should also be a top contender in the section.

St. Cloud Cathedral returns to the top 10 rankings this week courtesy of a 5-4 victory against Totino-Grace last Saturday. Call that game a “play-in” for the final spot in the rankings, as Totino was certainly under consideration as well for its recent work. Leading scorer Will Hammer (16-17-33) scored four goals in that victory and is a major player on a young and inexperienced Crusaders’ team. The Crusaders got knocked out of the top 10 two weeks ago courtesy of a stretch in which it went 1-6-0 in seven games. But the final four of those defeats were on the road to teams ranked in the top five in Class 1A (East Grand Forks, Warroad, Hermantown and Breck). It’s tough to knock Eric Johnson’s team too much for that losing skid.