The final week of the regular season brings a bit of
clarity to the Class 1A boys’ rankings. 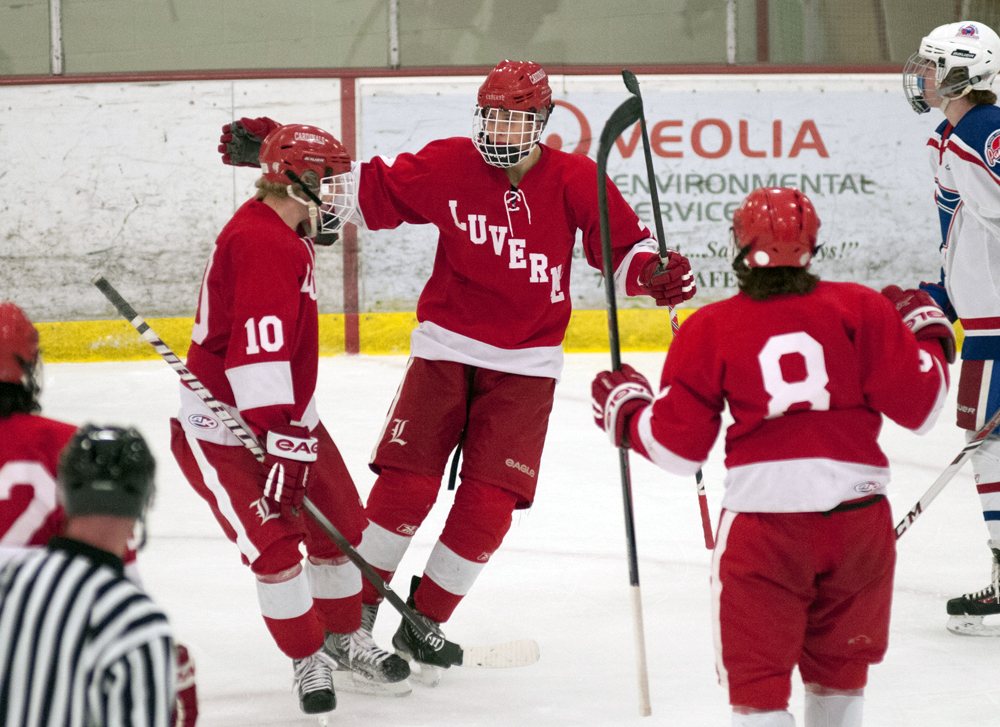 The final week of the regular season spreads out before the top Class 1A boys’ hockey teams and with it, brings a bit of clarity to the rankings. That’s in spite of a few losses spread among the top-10 teams. How much should Warroad be knocked for a loss at rival Thief River Falls? The same for Hermantown with a loss to Grand Rapids and tie at Duluth Denfeld? Would Virginia/Mt. Iron-Buhl hang onto the No. 10 ranking despite losing to Duluth Marshall?

The answers are below.

The top spot in the rankings again goes to East Grand Forks, which has proven to be consistent and dependable. The Green Wave beat a pair of Class 2A teams last week by decent margins to stretch their winning streak to 13 games and in doing so, actually lowered their goals against average to 1.15 per game — the second-best in the state. Only twice all year has East Grand Forks allowed more than two goals in a game and it has seven shutouts. The Green Wave don’t even allow many shots to reach goaltender Josh Weber (17-1-1, 1.22, .920). He’s facing an average of just 14.3 shots per game. Offensively, East Grand Forks has been buoyed by the return of Dixon Bowen (13-11-24) from an injury that forced him to miss 10 games. The junior is averaging almost a goal and two points per game, including eight combined points in his last three games. East Grand Forks will wrap up the top seed in Section 8A with a victory over Thief River Falls this week — and likely have done so even with a loss.

The four-time Class 1A state runners-up weren’t on top of their game last week, but the Hawks retain their No. 2 spot in the rankings. Hermantown tied Duluth Denfeld Monday night and then lost to Class 2A Grand Rapids Wednesday night before righting the ship over Brainerd. The Denfeld tie signaled that the Section 7A race may not be as cut-and-dried as it once seemed., although Bruce Plante’s club remains the favorite. Few Class 1A teams have the depth of talent the Hawks have, with six players in double-digit goals and another six with at least 10 points overall. Sophomore Cole Koepke (17-10-27) leads the team in goals, while Ryan Kero (16-23-39) is tops in points and has seven power play goals. Hermantown’s power play clicks at a 37.0 percent rate, a formidable weapon for a deep playoff run. But will a goaltender emerge as key to that run? Last year it was Adam Smith (9-3-0, 2.71, .894), but he’s split time with Jace Thomas (9-1-1, 1.67, .923) much of the season.

Is the grinding workload for Warroad’s top line starting to wear it down? All year long, the trio of senior Kyle Sylvester (34-44-78) and juniors Jared Bethune (30-52-82) and Kobe Roth (36-42-78) have carried the Warriors offensively. They’re the top three scorers in the state and clearly the engine that makes the Warriors’ machine go. Their combined 100 goals is nearly 76 percent of the team’s total of 132. Equally effective on the power play (11 goals) as on the penalty kill (nine goals), that line is dangerous in all three zones. But because of all those factors, they’ve also logged a ton of minutes. In the last three games, Warroad has gone just 1-2-0 and scored a total of five goals — three by Sylvester. Will the playoffs recharge their offense? One detail that goes overlooked is that Warroad has been very good defensively. Alex Burke (19-4-1, 2.02, .910) has played nearly every minute in goal and defensemen Luke Jaycox (3-17-20), Nick Jaycox (7-10-17) and Blayke Nelson (5-11-16) are strong.

Watch out for Breck. Coach Les Larson has his team hitting on all cylinders as the playoffs approach. Since an upset loss to Totino-Grace on Jan. 21, the Mustangs have run off six consecutive victories by a combined 36-8 score — and that’s including an impressive 6-3 win over Class 2A St. Thomas Academy in which Michael Orke (19-22-41) exploded for a hat trick and Henry Johnson (13-5-1, 2.23, .911) stood on his head with 35 saves on 38 shots. Those are two of the key senior leaders for the Mustangs, who before St. Thomas Academy’s state title three-peat, was the big bully on the Class 1A block with championships in 2009 and 2010. The Mustangs are the clear favorite in Section 2A to make their sixth straight state tournament appearance, although there are a cluster of good teams chasing them, including this Saturday’s opponent, Blake.

West has won 10 straight games since a two-game losing streak at the turn of the year — and the Scarlets have rarely even been challenged. They’re outscoring the opposition by 5.0 goals per game (6.3 versus 1.3), the second-largest margin in the state. During the 10-game winning streak, they’ve allowed more than two goals just once (their most recent 6-3 victory over Class 2A Rochester Mayo) and have scored eight or more four times. Junior Conor Wollenzien (14-1-0, 1.13, .925) has started eight of those 10 games in goal and appears to have taken on a full-time role after splitting with Jake Spiess (7-1-0, 1.61, .898) for the first two months of the season. Derek Frentz (22-38-60) leads a potent Scarlets’ offense that has nine players with at least eight goals and a dozen with at least 12 points.

And here’s the team with the largest goal differential in the state, as the Cardinals score a state-best 7.38 goals per game and allow only 1.12 goals per game, also the best in the state. They’re also the only unbeaten team (23-0-1) heading into their regular season finale at Providence Academy on Valentine’s night. Luverne has accomplished everything set in front of it save one — qualifying for the program’s first-ever state tournament. That’s the only goal the Cardinals have after being upset in last year’s Section 3A tournament. Sophomore Chaz Smedsrud (32-44-76) has a nose for the net, already recording a five-goal game (Dec. 14 against Morris/Benson Area) and two four-goal outbursts. He’s part of the “Kiddie Corps” line with eighth-grader Jaxon Nelson (26-33-59), who opened his first varsity campaign with six multi-goal efforts in his first nine games.

Here come the Crusaders. St. Cloud Cathedral coach Eric Johnson has a young team loaded with sophomores, but he challenged them with an intense January schedule that included the top four ranked teams in Class 1A (East Grand Forks, Hermantown, Warroad and Breck) all on the road. Perhaps not unexpectedly, the Crusaders lost all four while only scoring two goals. But since that dip, Cathedral has won seven straight to regain the favorite’s role in Section 6A. Senior Will Hammer (20-22-42) certainly has done his part, carrying the offense over those seven contests with 13 goals and 21 points — scoring at least two points in every one. He’ll need help, and a season-ending tilt at No. 8 Duluth Marshall should provide insight as to whether Cathedral is ready to make a big playoff push.

It’s tough to know what to make of Duluth Marshall this year. The Hilltoppers have talent and it’s shown in some impressive results, such as one-goal victories over Totino-Grace and Breck and a win over Class 2A Grand Rapids. But they’ve also stumbled against some of the better Class 1A teams since the turn of the year, losing 6-2 to Hermantown, 5-2 to Warroad and 3-2 to Section 7A rival Duluth Denfeld. In the past seven games, the ‘Toppers are 4-3-0. They did win a big section seeding contest at Virginia/Mt. Iron-Buhl last Thursday, 5-0 behind a hat trick from leading scorer Luke Pavelich (17-18-35) and a 23-save shutout from junior goaltender Alex Murray (13-7-0, 2.35, .903). Perhaps that result signaled Marshall’s readiness for a deep playoff run.

The Trojans responded to their first losing streak of the year by winning three straight games to hang in the top 10 rankings, although the games were unusual. New Prague posted a total of 19 goals in the three games, a much-higher output than their 4.37 goals per game average. And even including a 4-0 shutout of Rochester Lourdes last Saturday, their defense has allowed 20 goals in the last five games. Coach Chris Lonke’s team built its resume earlier this year on low-scoring, tight-checking victories, so the sudden outburst of goals is odd. Sophomore Alex Gregor (18-19-37) has scored in four straight games and is second to Augie Isaacson (20-28-48) in goals and third behind Isaacson and Seth Kriha (11-31-42) in points.

It has become impossible to ignore what Totino-Grace has done in recent weeks, as the Eagles surge into the top-10 rankings for the first time since early December.  Since losing to Duluth Marshall on Jan. 4, the Eagles are 8-2-0 (losing only to St. Cloud Cathedral and Hermantown) and have beaten both Breck and Class 2A power Benilde-St. Margaret’s. After struggling to score earlier this year, the Eagles have broken out in recent games behind Nick Tandeski (14-12-26) and Kai Barber (15-10-25). Coach Mark Loahr also won his 500th career game in the 3-1 victory over Breck on Jan. 21.