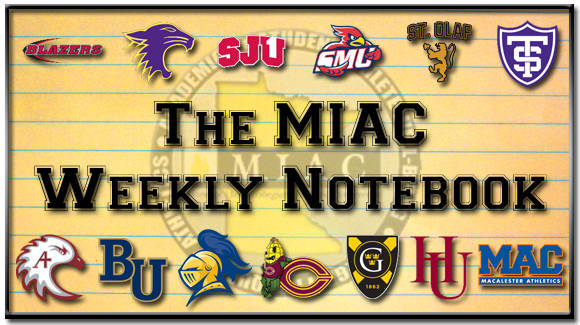 CONCORDIA | MIAC Member Page| Athletics home page | A shutout, a sweep, and a lead in the MIAC A pair of goals in each of the second and third periods led to a 4-0 win for Concordia over No.14-ranked St. John’s and the first sweep of the Johnnies since 2000. The Cobbers received goals from three freshmen and a senior in their ninth overall win of the season. First-year players Dalton Mills,Jon Grebosky and Zach Doerring all continued their outstanding play in their first collegiate seasons while Andrew Deters showed why he is the team’s leading scorer. The win is the third straight for the Cobbers. CC is now 9-5-3 on the year which is the most overall wins for any conference team. The win also moves the Cobbers into first place in the league standings. Concordia is 4-2-2 in the MIAC and has 15 league points.

GUSTAVUS | MIAC Member Page| Athletics home page | Gusties capture Golden Shovel A team made up of former Gustavus Adolphus College women’s hockey players captured the coveted Golden Shovel in the Women’s Division of the 2015 Labatt Blue U.S. Pond Hockey Championships held Jan. 15-18 on Lake Nokomis in Minneapolis. The team “Consistently Cuatro” made up of Gusties Sara Yungner ’11, Mollie Carroll ’12, Gina DeNucci ’12, Grace Olson ’12, Allie Schwab ’12, Jenna Christensen ’13, Kelsey Kennedy ’13, and Meagan Wanecke ’13 earned earn a berth in the Women’s Division Championship after recording 12 points in pool play with an unblemished record of 4-0-0. On the Mountain Khakis rink Sunday afternoon, Consistently Cuatro faced off against Shenanigans – a team that also entered the championship game with a record of 4-0-0 following pool play. With clear skies over Lake Nokomis and temperatures dancing around an ideal 35 degrees, the flannel-clad Gusties skated to an 11-7 victory to claim the Golden Shovel on what was the tenth anniversary of the U.S. Pond Hockey Championships.

HAMLINE | MIAC Member Page| Athletics home page | Men’s hockey remains undefeated in MIAC play Thanks to some yeoman work by goalie John Sellie-Hanson, the HU men’s pucksters remained the lone team to be unbeaten in MIAC play. Hamline improved to 3-0-3 and a tie for second place (7-4-4 overall) after a 4-2, 3-0 sweep of St. Olaf. Sellie-Hanson stopped 33 the first night. That’s a nice number but it paled in comparison to the next night when he swept aside 44 for the shutout. It is believed to be the most saves ever for a HU goalie in a shutout effort. The three MIAC wins is one more than Hamline had the past two seasons. Verleye leads women’s hockey to three-point weekend It was a weekend that Hamline senior forward Jordan Verleye… and St. Olaf … may not forget for a long while. In the opener of the two-game series, the senior’s breakaway goal in OT lifted the Pipers to a 3-2 win, their first MIAC victory of the season. The next night, Verleye had two goals and two assists in a 4-4 OT tie. In the process, she moved into eight place all-time in school history with 59 points.

SAINT CATHERINE | MIAC Member Page| Athletics home page | Wildcats tie defending MIAC Champs After St. Thomas snapped a five-game losing streak by beating St. Kate’s 4-0 Friday, the Wildcat hockey team rebounded by again flexing its power play muscles with a goal from Karly Nelson in the first period. The Tommies scored with 0.2 seconds remaining in the opening period to force at 1-1 tie. Abbi White had a career-best 35 saves in goal for the Wildcats.

SAINT JOHN’S | MIAC Member Page | Athletics home page | Young line fuels SJU to win Down five starters due to injury for a non-conference, weeknight game against Wisconsin-Stout, SJU head coach Doug Schueller turned to a number of underclassmen to step up, and step up they did in a 4-2 win. The Johnnies’ fourth line consisting of sophomores Ross Stecklein (Roseville, Minn.) and Dan Voce (Princeton, Minn.), and freshman Sam Valerius (Maple Grove, Minn.), entered the game with a combined one point in 12 varsity games, but was responsible for the team’s first goal and the game-winning tally. All three are high-school recruits that did not play junior hockey prior to enrolling at SJU.

SAINT THOMAS | MIAC Member Page| Athletics home page | Hot streak Over the last eight weeks, St. Thomas is a combined 27-0-1 in the sports of men’s basketball (10-0), women’s basketball (11-0) and men’s hockey (6-0-1), including five victories over nationally-ranked teams during that span. That includes a 15-0 record in January. The Tommies are ranked nationally in all three sports at No. 3 (men’s hoops), No. 4 (women’s hoops) and No. 12 (men’s hockey). St. Paul-Paloooza It will be a lively weekend in St. Paul. Saturday alone there’s the Winter Carnival parade, Crashed Ice competition, Garrison Keillor radio show, a Sam Smith concert, and even the Saintly City Cat Show. The MIAC will contribute to the fun as Tommie-Johnnie basketball tips off at 3 p.m. Saturday at Schoenecker Arena; Hamline and UST have interesting men’s and women’s hockey games Friday and Saturday nights (St. Paul’s Oscar Johnson Arena, suburban Mendota Heights).

LEGENDARY GUSTAVUS MEN’S TENNIS COACH STEVE WILKINSON DIES Steve Wilkinson, longtime men’s tennis coach at Gustavus Adolphus College and founder of Tennis and Life Camps, passed away on Wednesday, January 21 at the age of 73 after courageously living with cancer for nearly seven years. Wilkinson spent 39 years (1971-2009) at the helm of the Gustavus men’s tennis program. His teams compiled 929 wins overall, the most victories in the history of collegiate men’s tennis. Wilkinson’s squads won two NCAA Division III titles (1980 and 1982) as well as 35 Minnesota Intercollegiate Athletic Conference (MIAC) titles. His teams compiled an overall record of 929-278 (.769) and an MIAC mark of 334-1 (.997). In addition, his players claimed six national doubles titles, and four national singles titles. He coached 46 players to 87 ITA All-America honors, 103 players to 226 All-Conference honors, and five CoSIDA Academic All-Americans. He was named NAIA National Coach of the Year twice (1974 and 1984) and Intercollegiate Tennis Association Division III Coach of the Year three times (1982, 2001, and 2003). Full Story

The latest edition of the MIAC Weekly podcast takes to the ice, as Host Mike Gallagher welcomes first-year Hamline Head Men’s Hockey Coach Cory Laylin to talk about his team’s big improvement. Mike also takes his usual look at the top stories throughout the conference.