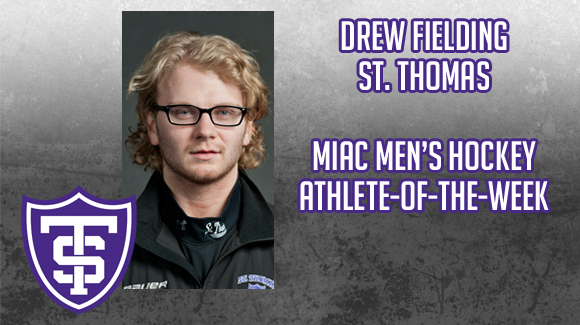 The St. Thomas men’s hockey team is off to a great start overall and in conference play following a two-game sweep of Saint Mary’s over the weekend. The Tommies allowed just one goal in a pair of wins over the Cardinals thanks to the outstanding play of goalie Drew Fielding (Burlington, Ontario/Nelson). The UST junior stopped 47 of the 48 shots he faced over the weekend and has started the season with a 4-0 record between the pipes. Fielding also added the first MIAC Men’s Hockey Athlete-of-the-Week of the 2013-14 season to his tremendous start.

Friday, Fielding allowed just one goal while making 22 saves in a 3-1 St. Thomas win to start conference play. The following night, he was even better in a 25-save shutout to help the Tommies complete the sweep with a 3-0 victory. UST killed off all six Cardinal power plays, including two majors on Saturday. Fielding is the lone goalie in Division III to start out with a 4-0 record and his .939 save percentage and 1.49 goals against average both rank in the top 20 nationally. His GAA leads the MIAC, and his save percentage ranks second in the conference.

Thanks to the sweep, St. Thomas is the only 4-0 team in the MIAC after two weekends. Only four teams started conference play, but the Tommies were the only ones to sweep, as they lead the standings with a 2-0 conference mark and six points. This weekend, UST will try to stay hot as they host UW-Stevens Point Friday at 7:30 p.m. and UW-Stout Saturday at 7 p.m. in a pair of nonconference contests.