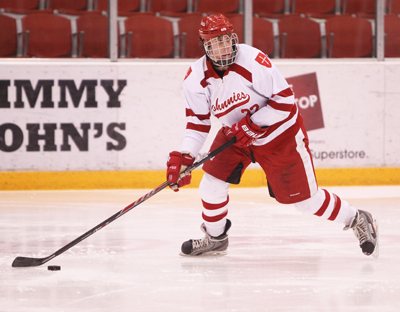 Phil Johnson and the Johnnies entered the break alone atop the MIAC standings, and ranked No. 13 in Division III. (Photo by Evan Gruenes / Saint John’s Sports Information)

By Rich Mies, Special to the MIAC (republished with permission) 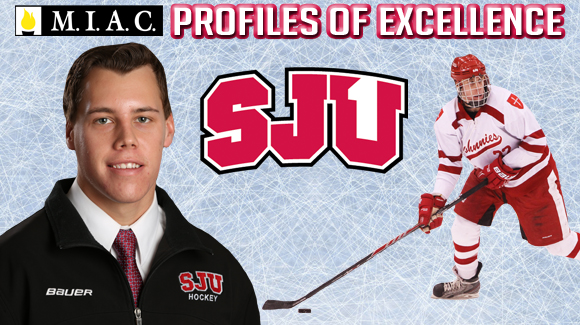 What really sets Johnson apart from the rest is that he skipped playing junior hockey, enrolled at Saint John’s directly from high school, and has been a success on the ice from his first collegiate shift.

The NCAA offers 89 varsity sport programs, of which the Minnesota Intercollegiate Athletic Conference (MIAC) sponsors 22. In only one of these sports is it considered unusual for a student-athlete to go directly from their high school classroom to collegiate life and begin competing as a first year student.

For decades, men’s ice hockey has had a special relationship with the NCAA under which potential student-athletes can opt to play in the junior development leagues from ages 16-to-20 without losing their amateur status or their college eligibility. As a result, Division I coaches steadily steer their recruits into juniors for a year or two before offering them a scholarship. This way, the potential student-athlete can play 60 or so games a season and gain valuable experience.Since the Division I coaches focus their recruiting on players in Juniors, virtually all high school players who think they might have the talent to secure a D-I scholarship opt to go that route. This forces most Division III coaches to recruit from the junior programs as well, making an 18-year-old freshman hockey player as rare as a 70-degree January day in Minnesota.

“I hadn’t talked to any D-I programs,” said Johnson. “Therefore, no one suggested that I play juniors. I guess the biggest reason I decided not to play juniors was that I knew that I was never going to make a living playing hockey, so I figured I would just go straight to college after high school and start figuring out and working on what I wanted to do the rest of my life, which happens to be accounting. Luckily it worked out perfectly because [Head Coach Doug] Schueller gave me a chance to play here, at Saint John’s, without having to go down the junior route first and I am very thankful for that.”

Johnson grew up in Duluth as part of an athletic family. “My parents went to college at North Dakota,” he said. “My dad played football there and Mom played basketball. My brother Ben played hockey in high school, too.” He added, with a smile, “my sister Emily is the non-athlete in the bunch.’

Like thousands of Minnesota youths, Johnson learned to skate at a young age and by the time he was 4-years-old he was introduced to organized youth hockey. “I learned to skate when I was about 3 and started playing in the Duluth youth program when I was 4,” he said. “I played Mites, Squirts and Peewees for two years each.”

Rather than play in Bantams as an eighth grader, Johnson opted to play for Duluth East’s junior varsity team, but joined the Bantam team as a ninth grader. “We took fourth or fifth at the state tourney that year,” he said. “In Peewees and Bantams, we played more games than we did in high school, between tourneys and scheduled games.”

He joined the Duluth East varsity as a sophomore and skated at center with the Greyhounds for three years. They reached the Class 2A state tourney each of those seasons. They played – and lost -two games in Johnson’s first trip to State and brought home the consolation bracket title his second try.

His senior year was a most memorable one. “We won the Section championship game in overtime,” Johnson said. “We won our first round game at State in two overtimes and won in the semifinals in OT. Then we played Eden Prairie in the championship game. We lost, but it took three overtimes.” 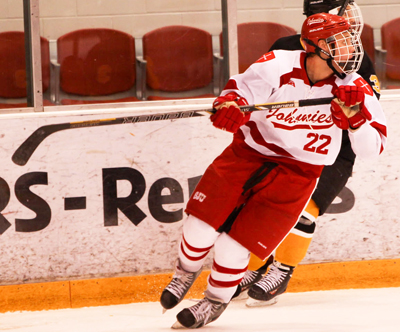 Phil Johnson has made a huge impact on the ice during his four-year hockey career at Saint John’s University.
(Photo by Sean Donohue / Saint John’s Sports Information)

It was not until shortly after the state championship game that Johnson began to hear from college hockey coaches. “[Coach Schueller] talked to me a lot, and talked me into visiting Saint John’s,” Johnson said. “I looked at St. Thomas, too. I also looked at North Dakota, but most likely would not have played hockey if I went there.”

He liked the campus at SJU and liked the location, as he did not want to be in the Cities. The conversations with the coaching staff at Saint John’s convinced him that life behind the “Pine Curtain” was a good fit for him.

“I remember watching Phil play in the state high school hockey tournament and specifically in the state championship game against Eden Prairie,” recalled Schueller “He was on a very talented Duluth East Team back then with a number of Division I players on that team. He was their third line centerman and every time that [Eden Prairie’s] Kyle Rau would step on the ice, Phil and his line would jump over the boards. Rau was going to the U of M the following year and had a successful year as a freshman there. Phil did a great job in that game of shutting down one of the best players in the country. That is when I knew that he could play for SJU and that he would be a true freshman that we could be successful with.”

Johnson has been a vital part of the Saint John’s program from the start of his freshman season, playing in all but eight games in his career. He has helped lead SJU to three consecutive appearances in the MIAC Playoffs, an MIAC regular season title, a Playoff championship and an appearance in the NCAA tourney.

“I recruited Phil to be a defensive centerman and he has grown into an all-around player,” Schueller said. “He is now a power play guy as well as a penalty killer for us. Phil’s best quality is his work ethic. He plays the game fearless and is willing to do the hard things that make him so effective.”

In Johnson’s freshman year, the Johnnies posted a 9-7 record in conference play, good enough for third place. The Johnnies lost to Gustavus 3-1 in the semifinals of the MIAC Playoffs, and finished the year 11-13-2. Johnson found the net four times (once in MIAC play) and added 10 assists for 14 points.

As a sophomore, Johnson led SJU with 12 goals, and added nine assists. The Johnnies captured their first MIAC championship since 2005 with a 9-4-3 record. They proceeded to defeat Concordia (5-1) and Gustavus (3-2) to nail down The Johnnies’ first MIAC Playoff title since 2003. SJU advanced to the NCAA tourney but lost to UW-Eau Claire in the opening round, 4-2, to finish the season 16-8-4. Johnson was named to the All- MIAC First Team, as he scored seven goals with eight assists (for 15 points) in conference play, ranking in the top 10 in the league in all three categories.

Last year, SJU took third in the league with a 10-6 record, but lost 3-2 to Gustavus on a goal in the final minute in the semifinals of the MIAC Playoffs. Their season ended with a 16-10 mark. Johnson repeated as an All-MIAC honoree after posting five goals and three assists in league play and seven goals, eight assists overall.

“I think that [Johnson’s] leadership qualities have grown with his confidence as a player,” said Schueller. “He was pretty quiet as a freshman, but when he started playing more in an impact role, he started speaking up more. He is still not a really vocal leader and is more of a ‘lead-by-example’ kind of player.

“Phil is driven on the ice as well as in the classroom. He works hard in life and is willing to do what it takes to be successful. The younger players can see that and I feel that helps them be focused and work on and off the ice.” 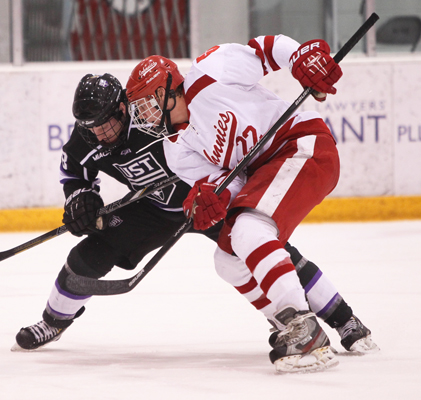 The Johnnies count on Phil Johnson (22) to produce on both ends of the ice, and the senior is a two-time All-MIAC pick. (Photo by Evan Gruenes / Saint John’s Sports Information)

Entering this season, Saint John’s was expected to contend for the MIAC crown in a three-way battle with Gustavus and defending champion St. Thomas. With the teams on extended break for the holidays, SJU currently sits atop the standings with a 4-1-1 MIAC record. They stand 6-3-3 overall and are ranked 13th in the nation in the latest United States College Hockey Online (USCHO) poll.

“The season is off to a great start,” Johnson exclaimed. “We are nationally ranked and we are currently leading the MIAC. We’ve gotten off to a great start in conference play which is huge because we only have 16 conference games and we treat each one like a playoff game. Also we’ve had some freshman step up and take on major roles on the team which has led to a lot of our success so far this season. Another big part to our start is that [goalie] Saxton [Soley] is playing great and we can count on him every night we step on the ice.”

Off the ice, Johnson is active in the Accounting and Finance club, which is open to majors in both departments at SJU and its sister school, the College of St. Benedict. “We have speakers come in to talk about career options, hold resume workshops, share interview advice and things like that,” he said.

In the summer of 2013, Johnson joined a group of students from SJU/CSB studying in Spain for nearly two months. “Three of my teammates went, too,” he reported. “We took classes there and met out foreign language requirement. We traveled across Spain, sightseeing in Madrid and Barcelona and other places.”

Johnson currently has a 3.72 grade point average and will graduate in May with his degree in Accounting. “I’m on the ‘CPA track,’” he said, meaning he will be ready to complete the CPA exam this summer. Johnson had an internship with TCF Bank in their Risk Control Division, the internal audit group within corporate headquarters.

In December, Johnson accepted a job offer from PricewaterhouseCoopers. “I took a job offer from PwC and I’m excited to start my career off their next fall,” he said. “I will be taking the CPA exam this summer and then I will be a part of the PwC audit team in the fall.”

Schueller has no doubt that Johnson will be as successful in his chosen profession as he has been on the ice. “I believe the number one attribute that Phil and a lot of athletes have that will make them successful in life is that they are competitive. I would say that Phil is very competitive and that will help him achieve any goal that is set in front of him.”