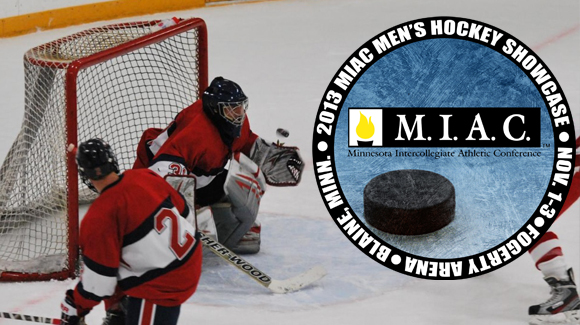 BLAINE, Minn. — Since the Minnesota Intercollegiate Athletic Conference (MIAC) is situated within the borders of “The State of Hockey,” it makes sense to drop the puck on the new season in grand fashion. For the fifth year in a row, all nine teams will take the ice for the first time at the MIAC Men’s Hockey Showcase Friday, Saturday and Sunday at Fogerty Arena in Blaine, Minn.

The 2013 Showcase will feature three games each day – two on the Fogerty south rink and one on the North rink – in a celebration of men’s hockey in the MIAC. Each team will play two games over the course of the weekend, giving conference hockey fans a smorgasbord of action to start the season.

“The MIAC Men’s Hockey Showcase is one of the best events we have each season,” said MIAC Executive Director Dan McKane. “It gives fans an excellent look at what they can expect from each team this season, it allows all our programs to come together and it really shows off the camaraderie and teamwork within the conference. It’s going to be a great weekend at Fogerty Arena.”

This year’s MIAC Showcase carries another special twist – if any games remain tied after overtime, it will be the site of the first-ever shootout in NCAA Division III. The conference coaches and administrators voted to add the shootout, along with a new points system for the standings, this season, so the Showcase works as a perfect place to test it out and give fans, players, coaches and officials a chance to get used to the exciting new tiebreaker.

The shootout will follow NCAA protocol, with three players selected from each team to try and score on the opposing goalie. If the shootout is tied after three attempts by each team, it will continue one attempt at a time until the tie is broken.

The puck drops to start the season Friday at 5 p.m., as Augsburg will face Saint Mary’s on the south rink. Gustavus will take on Bethel at 6:30 p.m. on the north rink, and Friday’s action will conclude with Hamline against Saint John’s on the south rink at 8 p.m.

The 2013 Showcase concludes Sunday starting at 1 p.m. with Concordia versus Hamline. Saint Mary’s will square off against St. Olaf at 2:30 p.m. on the north rink, and the event will conclude with St. Thomas and Gustavus going head-to-head on the south rink at 4 p.m.

Fans who can’t make it to Fogerty will be able to track all the action from afar. There will be a live webcast of all games on the south rink courtesy of the MIAC andWebcast America. Fans will also be able to view the games online on-demand following the event, and order DVDs of each broadcast. Saint Mary’s University will again handle all sports information at the showcase, and the Cardinals will provide live stats for all nine games (south rink – north rink). Fans can also track the action on the MIAC scoreboard, or on any smart phone or tablet using the MIAC app, which is a free download.

The MIAC has a home page dedicated to the event, complete with schedules and helpful links and information about each team. Throughout the Showcase, the page will be updated with scores, stats, recaps, photos and more. Saint Mary’s also has an extensive preview with great information about the event and all nine teams.