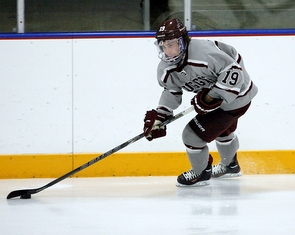 BLAINE, Minn. — The MIAC Showcase is a “tournament” where groups of three MIAC men’s teams are split into what are essentially three seperate mini-round robins taking place over a three day period. This year marked the fifth straight season the league has kicked off its season with the event.  The mini-round robins were as follows: Augsburg-Saint Mary’s-Saint Olaf, Hamline-Saint John’s-Concordia, and Saint Thomas-Gustavus-Bethel.

What we can take from it

Augsburg appears to have found depth in scoring. Their offense was impressively led by their top two lines. They outscored their opponents 9-3 and outshot them 69-41 on the weekend. Their defense was stingy in front of new starter John Bretzman, who was solid with a 1.5 GAA on the weekend. The Auggies were dominant against teams that finished near them in the standings last season. Have they taken a step to the top 5 of the MIAC? Too early to tell, but they took an important first step and should gain momentum from this weekend.

Saint Mary’s continued to march towards the box, taking 11 penalties in both games. Against Augsburg, despite allowing only one PP goal,  all the penalties really killed their momentum. Against Saint Olaf,  the impact was not as negative as Saint Olaf took 9 penalties of their own. In that game, Saint Mary’s came back by scoring two PP goals in the third. Senior Bobby Thompson is off to a scorching start with 4 points (2g, 2a) in 2 games. It was big for the Cardinals to get the split as they attempt to get out of the MIAC cellar. Both Christian Gaffy and Mitch Fernsler started in goal. Gaffy got the win and Fernsler the loss. Both played well, but Gaffy got the win. Perhaps the Cardinals stick with Gaffy and give him a chance to solidify himself as the starter.

Saint Olaf is feeling the loss of the Harris brothers. They were not a powerful offensive team with them, but without them they managed only 3 goals in 2 games. Defensively they were not horrible. Allowing 3 goals a game is not good, but it’s not awful. Both Henrik Wood and Steve Papciak saw action and faced a similar onslaught of shots. Wood and Papciak are both proven goaltenders, so they are the least of the Ole’s concerns. How they are going to score is their biggest issue. It is a long season, so perhaps they figure this out, but judging off of last season, that is doubtful.

What we can take from it:

Concordia is for real. I know it is early and that anything could happen, but they were dominant in their two games. One was against the reigning MIAC Playoff Champion St. John’s. Concordia matched up with the Johnnies, shutting them out in a 2-0 win while out-shooting them 34-29. Neamonitis, arguably one of the best netminders in the MIAC, was everything the Cobbers needed as he stopped 65 of the 66 shots he faced on the weekend. Suderman had a nice 3 point weekend and the Cobbers saw 5 different players score. Their second game was against the one-win Hamline Pipers of yesteryear. They won 6-1, but were outshot 37-21 and took 12 penalties, they will need to clean that up if they want to sustain the success of the weekend all year.

Saint John’s, the coaches’ preseason pick to win the league, is yet again going to be good. The Jonnnies got off to a bit of an underwhelming start but should be fine. They may have only scored 4 goals all weekend but they only allowed 4 as well. This team is simply too deep and talented not to be good. Concordia beat them 2-0, but one was an empty-netter and the Cobbers should be competing all year for supremacy in the MIAC with the Johnnies. They got a tough game from Hamline, but came out on top and were never behind. Newcomer Andrew Commers scored his first goal at the D3 level, and Zach Knight, Neal Smith, and John Carroll each registered one goal and two assists. Saxton Soley only got one start, the win against Hamline, but will most likely hold down the starting spot from now on.

Hamline is much improved, but the results were the same as last year. Rubbelke and Zurn yet again lead the way for the Pipers as they really gave the Johnnies a game. In that contest,  Zurn had a goal and assist and Rubbelke had two assists. Heimer was solid in net for the Pipers in that game and was put in after the first against Concordia; Karel Popper was chased from the net after allowing 4 goals on only 8 shots. Having the same coach for two years in a row appears to have led to some improvement. How much remains to be seen, but even though they are 0-2-0, they put up a great fight against the much heralded Johnnies and significantly outshot Concordia . They should easily eclipse one win this season.

What we can take from it

Saint Thomas got the sweep, but not in dominating fashion. They barely beat Bethel in a 3-2 OT win that saw them playing catch up twice before netting the winner in overtime. Then they beat Gustavus 5-3. At one point they were up 5-1, but faltered late and allowed two third period goals that made it close. If they can keep that kind of scoring up, they will be dangerous as they are a defensively sound team. Having a big game was Alex Altenbernd who had a huge four point night for the Tommies against Gustavus, with one goal and three assists. Connor McBride had a nice game when he played savior against Bethel netting the game-tying and game-winning goals. Drew Fielding was solid in both games stopping 45 of the 50 shots he faced over the weekend. A good start for a sure-to-be top team in the MIAC.

Gustavus’ biggest concerns coming in were their goaltending and defensemen. It seems they will go with John McLean for the foreseeable future as he had a better weekend than Patrick Sullivan, whom he replaced against Saint Thomas after he let up 5 goals. Defensively, they did well against Bethel but struggled against Saint Thomas. Expect that inconsistency to last for a bit as they are attempting to replace nearly all of their defensemen from last year. Returning leading scorer Adam Smyth was held scoreless for the weekend, that will probably not be the norm. No one really stood out on the offensive end for the Gusties, which is not good as that should be their strength this season. Not time to panic though, as it is very early and Gustavus is well-coached. I would be surprised if they were not in contention all season, but they certainly have things to figure out.

Bethel is better and could be a serious contender for the playoffs. They did go 0-2-0,  but they could very well have two wins instead. They lost two one-goal games, one in OT, and played with speed and intensity. The combo of Mitch Hughes and Brock Raffaele looked good and should be a threat in every game they play. In two games, Hughes had 3 goals and Raffaele had 3 assists. Senior goalie Dan Harper made a strong case to get the majority of the starts. Against Saint Thomas, he faced 46 shots and stopped 43. However, Steven Bolton also had a solid game against Gustavus when he stopped 30 of the 32 shots he faced. As good as the goalies were, Bethel will need to decrease shots allowed and increase shots taken, as they were outshot 78-39 in the two games. That is not a trait of a winning team, but they still played well against two historically good teams and that should give them confidence after a rough end to last season.

It is early, so nothing should be read into too much. It is highly unlikely that the standings will match what they are now come end of the season. However, there were no real surprises as teams performed basically as expected. The lower teams from last year all had good showings, even if their records do not show it. Overall, the level of play seemed higher, there is no way to prove that, but it seemed faster. All in all, the Showcase “showcased” that the MIAC is a conference where any team can play with any team. It should be an exciting season.