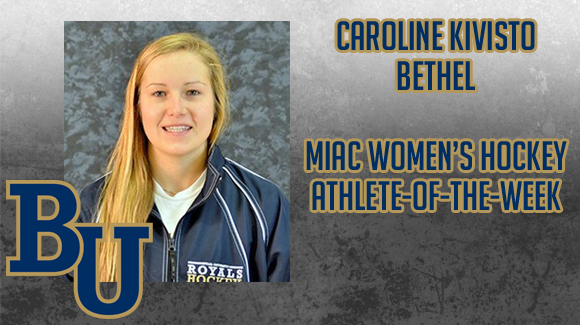 Bethel began its 2013-14 season with a big series against No. 6-ranked UW-River Falls, but the Royals showed they could hang with the nation’s best as they split the series. Bethel proved it will have a high-powered offense with eight goals in the two games, led by the scoring touch of sophomore Caroline Kivisto (Dassel, Minn./Dassel-Cokato). The forward scored four goals – two in each game – to help the Royals hang with the Falcons and pull off an upset. For her performance, Kivisto was named the MIAC Women’s Hockey Athlete-of-the-Week.

Kivisto helped Bethel stay close with UW-River Falls in the team’s first game of the young season with a pair of goals in the 5-3 loss. A day later, the Royals flipped the script with a 5-3 upset win over the Falcons, with Kivisto starring again with two more goals. Thus far, her four goals lead the MIAC and she’s tied for the league lead with four points. Kivisto was efficient over the opening weekend, as she scored her four goals against UW-RF on just six shots.

Thanks to its split, Bethel started the new campaign 1-1, and now are the first team outside the Division III Top 10 in the “Others receiving votes” section. Kivisto and her teammates had last weekend off, and they’ll open conference play when they re-take the ice Friday. Bethel hosts Augsburg in both teams’ MIAC opener at 7 p.m., and the two will conclude the series Saturday at Augsburg at 3:30 p.m.