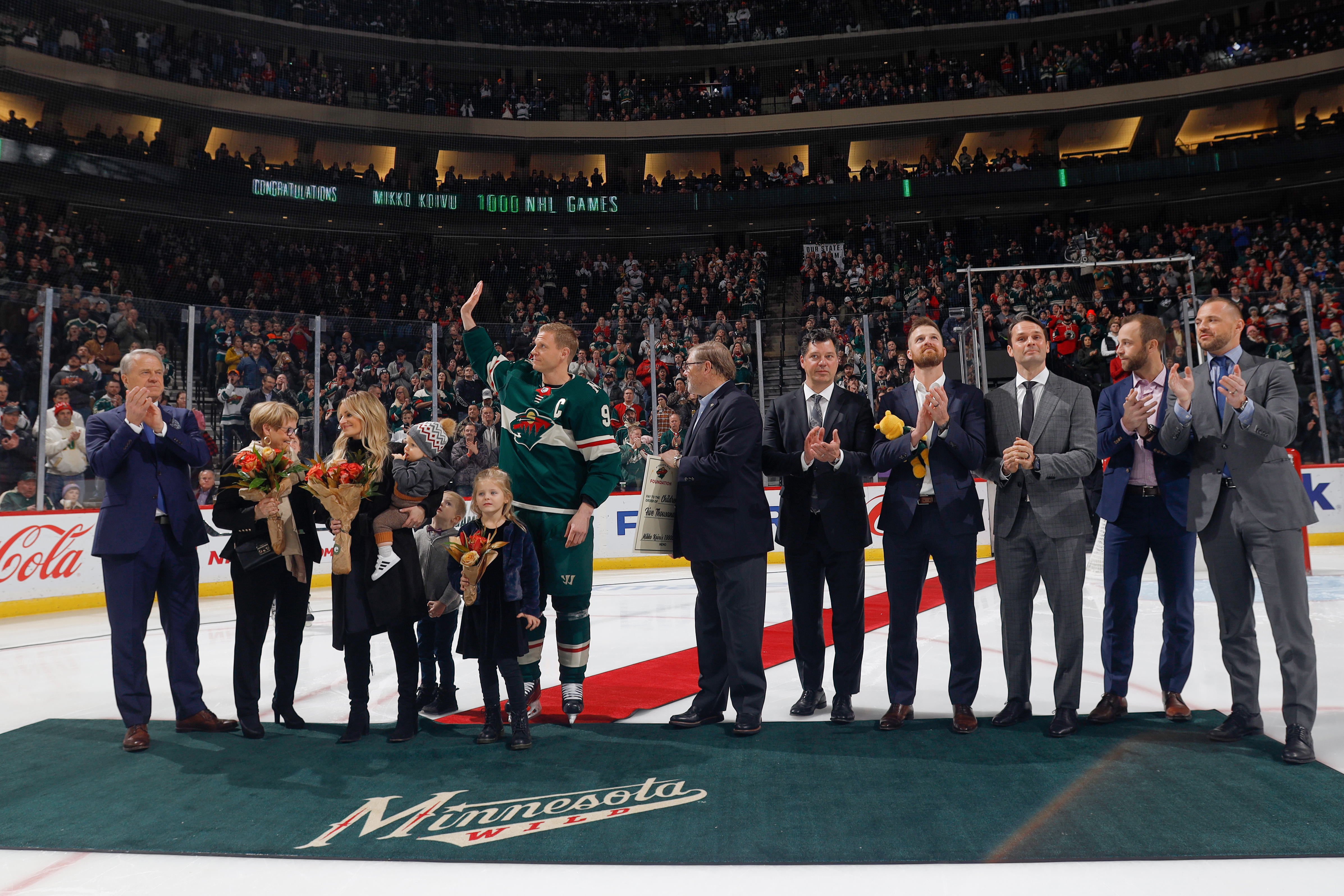 Wild captain Mikko Koivu waves to the crowd during a ceremony to recognize his 10ooth NHL game prior to Minnesota’s game versus the Anaheim Ducks on Tuesday night at Xcel Energy Center. Koivu was joined by his family and, from L to R, Wild owner Craig Leipold, GM Bill Guerin and former Wild players Kyle Brodziak, Niklas Backstrom, Nick Schultz and Marian Gaborik. (Photo courtesy of Minnesota Wild/Bruce Kluckhohn)

Bruce Boudreau was frank with the media after the game. He didn’t know what he was doing when choosing Minnesota Wild players for the team’s first shootout of the season against the Dallas Stars on Dec. 1.

After being tied 2-2 through the first three round of the shootout, Boudreau went with the captain, Mikko Koivu, who was skating in his 1,000th NHL game that afternoon in St. Paul.

“Initially, I wasn’t going to put him in because he hadn’t scored in a shootout in like two years,” Boudreau said. “And I figured he was rested because he didn’t play in overtime.

“It was his day, so all the stars were shining in the right direction.” 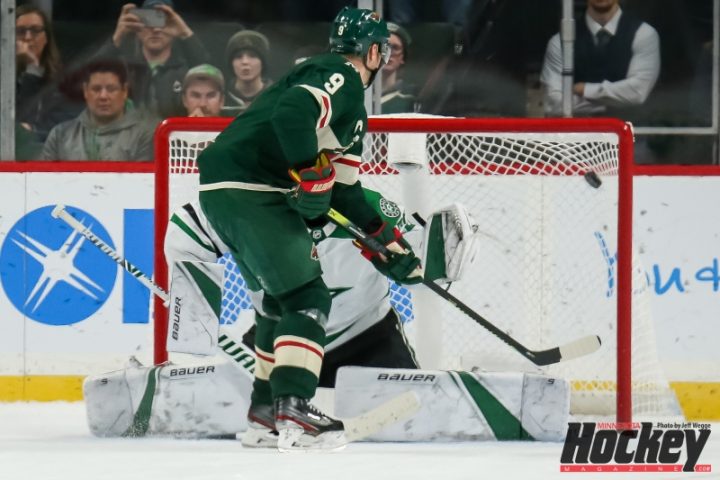 Mikko Koivu watches his shootout-winning goal hit the back of the net to lift the Wild to a 3-2 win over the Dallas Stars on Dec. 1 at Xcel Energy Center. (MHM Photo / Jeff Wegge)

The 36-year-old center became the 55th player in NHL history – out of 342 players to reach 1,000 games – to hit the milestone with the same organization. In the second period, he earned his 700th career point with the primary assist on Kevin Fiala’s power-play goal for a 1-0 lead.

Once called upon in the shootout, with his family in the arena to watch, Koivu went to his trademark backhanded move to score the game-winning goal against Dallas goaltender Ben Bishop.

The ending doesn’t get much more storybook than that.

“I think if you saw our bench after, you could see how excited the guys were for him,” said Wild forward Zach Parise. “It was the perfect ending to a special day for him.”

The scene Parise referred to was a complete mobbing of Koivu on the Wild bench once goaltender Alex Stalock stopped Corey Perry in the fourth round of the shootout to complete the Wild’s 3-2 victory over Dallas. Boudreau didn’t get in on the mob scene but said “it was pretty cool.”

“And that’s what you love about sports, is watching your team happy,” Boudreau said.

Said Koivu: “To be honest, to me that’s what hockey’s all about.”

The shootout victory was a nice touch on Koivu’s big day, but it also capped a comeback win after the Wild were down 2-1 late in the third period. The Wild, 0-4 in overtime games this season to that point, played their most complete extra session of the season before making it to the shootout.

Any extra pressure for Koivu when his name was called? Not really.

“I tried to look at it as an opportunity,” Koivu said. “Just tried to pick a move that I’m comfortable with. That’s pretty much all you can do. It’s always a challenge to go to the shootout against these goaltenders in this league.” 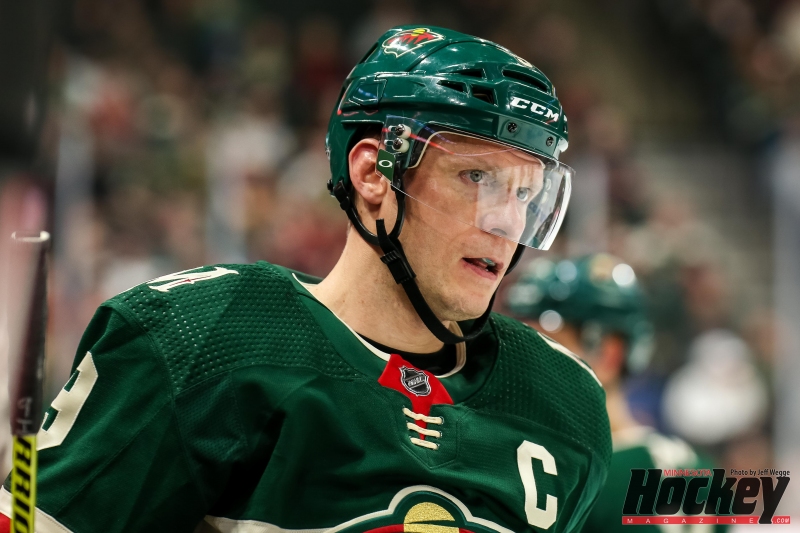 Unfortunately for Koivu, any good feelings from that game were likely dampened when he sustained a lower-body injury the following Tuesday against Florida on the road. He was placed on injured reserve Dec. 6. Despite that, he was honored prior to Tuesday’s home game against Anaheim to recognize his milestone of 1,000 games.

“That was something that I’ll never forget,” Koivu told reporters after Tuesday’s game. “They built a culture around here early on when the team first got here and when I first got here. Gabby and Schultzie, they’re the guys that really showed me the way things are done here and showed me the way how we do business around here. Then, obviously Backie coming all the way from Finland and Brodzy.

“I tried calling and talking to those guys in the last couple days and no one answers the phone. Now I understand why.”

They are all part of his storied career, which includes Koivu being named the team’s first full-time captain a decade ago.

“I think everything that I do, and I’ve done, I’ve always tried to do what I believe is right,” Koivu said. “I’m sure I do things different now than I did seven, eight years ago. But I think one thing that hasn’t changed and won’t change is I believe in work and the work ethic you’ve got to put in.” 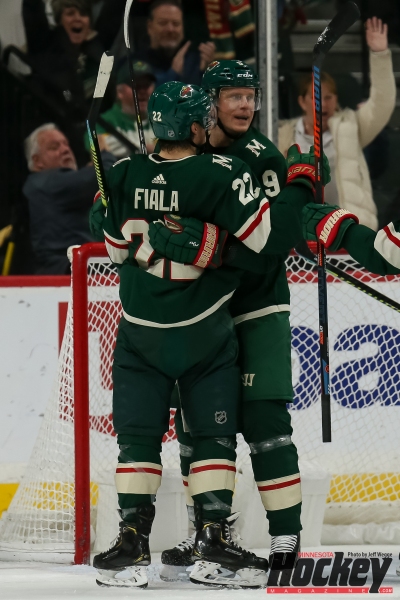 Koivu and teammate Kevin Fiala celebrate Fiala’s goal set up by the Wild captain’s 700th career assist in his 1000th game in the second period of Minnesota’s win over the Dallas Stars on Dec. 1 at Xcel Energy Center. (MHM Photo / Jeff Wegge)

He’s only the second Wild player to score 200 goals, with that mark coming Jan. 21, 2019 in Vegas. Gaborik holds the franchise record with 219 goals.

Koivu, a native of Finland, is the third player on the current Wild roster to skate in his 1,000th game. Defenseman Ryan Suter had the honor last October, and the Dallas game Dec. 1 marked No. 1,100 for him. Eric Staal hit the 1,200-games mark right after Thanksgiving. That’s more than 3,300 games between the trio.

Koivu’s milestone might have come last season had it not been for an ACL and meniscus tear in his right knee during a game in Buffalo in early February that ended his season, missing out on the final 29 games.

Of course, like many NHL players, Suter and Staal have played for multiple organizations. Koivu is someone who a player really appreciates once they’re on the same side, Staal said.

“He brings so much to the table,” Staal said. “Eats so many minutes that are important to having success as far as team play goes.”

As for the other side of the spectrum, Wild players Ryan Donato, Fiala and Luke Kunin were just 9 years old when Koivu made his NHL debut. Joel Eriksson Ek and Jordan Greenway were only 8.

Stalock recalled how cool it was as a kid to watch guys like Gaborik and then Koivu lead the way as the Wild’s “star power.”

“Obviously, he’s evolved into a leader, a father, a guy that a ton of young players have come into this locker room and looked up to,” Stalock said. “It’s a privilege for some of these guys to be able to watch a true pro like him prepare.”

The biggest thing Koivu said he’s learned, and is still learning, is dealing with the ups and downs, trying to stay even-keel every day. It goes beyond hockey and is also a good life lesson, according to Koivu.

“If you can keep that attitude and make sure that you control the things that you can, I think that’s when you can feel good about yourself,” Koivu said.

It shows. Stalock said he sees Koivu come to the rink each day with a mission and a drive to get better and strengthen his body.

Koivu is under contract through this season. Might he choose to retire, playing his entire NHL career in Minnesota? It’s a possibility.

Three banners hang from the rafters of Xcel Energy Center: The State of Hockey flag, a 2007-08 Northwest Division Champion banner in the middle and the retired No. 1 for Wild Fans to the right. Might Koivu’s No. 9 be lifted to the rafters as the first Wild player’s number to get that treatment?

It’s a possibility. And he’s built a strong case.