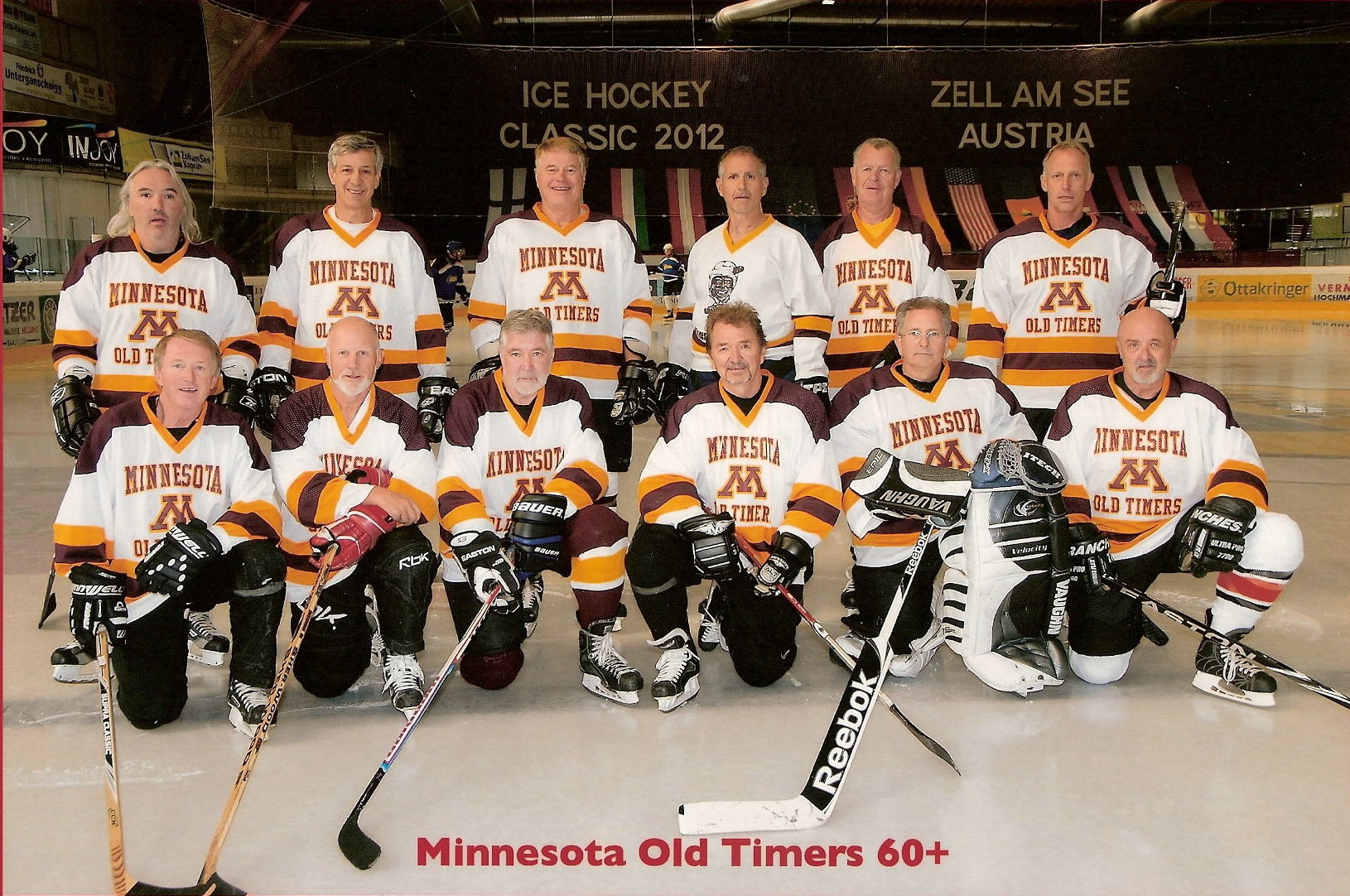 The Minnesota Old Timers 60+ hockey team, always on the move, made their 4th trip to Europe in October to play in the 2012 Austrian International Oldies Ice Hockey Classic, Oct 3-7, held every two years in Zell am See, Austria. They won the 50+ tournament in 2006, their first visit, and finished high in the final 50+ standings the last two visits in 2008 and 2010. With only five teams in this year’s newly formed 60+ division, they played a round robin and finished a perfect 4-0, winning the gold medal for the second time. More on the tournament games later.

The Town and the Tourney 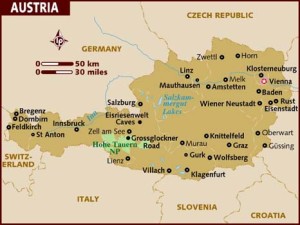 Location of Zell am See

Zell am See, located in the heart of Austria a couple of hours south of Munich, Germany, and about 100 km east of Innsbruck, is a small Vail-like resort town with a population of about 10,000. It sits next to the gorgeous alpine lake, Lake Zell, and lies in the Zell Valley, a corridor in the Kitzbuhel Alps. The town is surrounded by rugged mountains with world-class skiing and is an important tourist destination and transportation hub for the region. It hosted World Cup skiing events in 1973 and 1979, as well as an IHF World Hockey tournament in 2008. Stunning pictures of the surrounding area and the Schmitten ski area can be viewed at: Ski Zell am See – Kaprun.

A couple of little known facts about Zell am See: first, it was the site of Part Ten of the 2001 TV mini-series, “Band of Brothers”, produced by Steven Spielberg and Tom Hanks, and second, it was the original home of the real Von Trapp family that was depicted in the “Sound of Music”. They moved from Zell-am-See to Klosterneuburg, Austria, because their home, a lake hotel called “Kitzsteinhorn”, was flooded. Who knew? 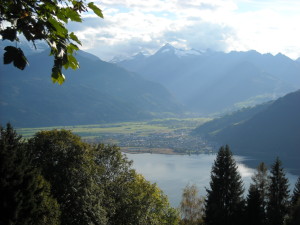 In addition to the Minnesota 60+team, there were 2 others teams from the United States; the Delta Hockey Club out of Seattle and the USA Mainiacs from the East coast, both in the 45+ division.

The Players – The Colorado Connection

Economic conditions, including the cost of airfare and Euros as well as personal scheduling conflicts, took their toll on the team’s plans to participate in the 2012 tournament. Several of the players from the Twin Cities metro area planning to go had to cancel, leaving the team significantly short of a full squad. The organizer of the trip, Kevin Milbery (there is some suggestion that his wife Martha actually did all the work) had to scramble to find enough players to field a team. Kevin is one of the Minnesota Old Timers that has been to all four tournaments. Besides Kevin, only four other players from Minnesota could commit; Larry Stordahl, Bob Dolan, Eric Blank and Bill Rossini. 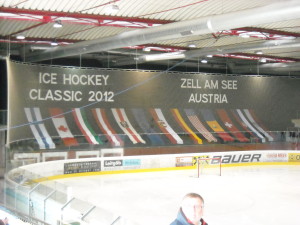 Meanwhile, out West in Colorado a team from Ft Collins and Denver called the Puck Hawgs (a story in itself below) knew about the Zell tournament and were trying to put a 60+ team together. They had the same problem and could not get enough players to commit. One of the players, Tom Davis, knew Jack Skjonsby, a player from Denver he had played with before. Jack lived in Minnesota for several years, knew about the Minnesota team and, in fact, had played with them in Zell in past tournaments and was planning to go again. They got to talking and Jack told Tom that the Minnesota team might be looking for some players. There you go! Tom asked three other Hawgs (Frank Schreiner, Mike Siler, and John Molenar) and all four jumped at the chance. The rest is history. Well, almost. The team still didn’t have a goalie! A few phone calls later and the team landed Charlie Holland out of Monument, CO, and a former goalie from International Falls, MN.

Enter the last piece of the puzzle, the “Professor”, a Canadian from Thunder Bay, Ontario. Dr. Walter Epp, an Associate Professor of History Education at Lakehead University in Thunder Bay, Ontario, joined the team while on a research trip in Europe. A friend and noted local hockey acquaintance in Thunder Bay had played for the Minnesota team in 2010. This connection and Walter’s personal account of the Europe trip that combined research and hockey can be found in a related article on this website.

The games were played against teams from Austria, Finland, Canada and Germany in that order over a four day period. While the team went 4-0, the first three games went down to the wire. The Minnesota team only scored 5 goals in those three games, but only gave up 1. Only outstanding goaltending and stingy defense allowed them to enter the final game with a record of 3-0.

Game 1 vs Austria, a combined host team from three Austrian cities and one German city. In the early going, since the team was newly formed and playing together for the first time, everyone was tentative and concentrated on defense. As the team gained confidence in the first half of the game, it became apparent the skills and styles of the players blended together nicely. Goals by Larry Stordahl and Bill Rossini, strong play from Charlie Holland in goal and from the defense pairings of Eric Blank/Tom Davis and Mike Siler/Frank Schreiner resulted in a tense 2-0 win.

Game 2 vs Finland, Euro Kiekko. Play against the much tougher and very skilled Finland team was up tempo and filled with great opportunities by both teams. Tom Davis scored early for Minnesota and Larry Stordahl broke the tie late in the game for the win. Again, Holland was sturdy in goal and team defense prevailed for the 2-1 win. Up next, the always tough Kitchener Rangers from Ontario, Canada.

Game 3 vs Kitchener. From start to finish, this game featured a wide open, up-and-down-the-ice style of play on the international size rink surface. From the opening faceoff and a Minnesota breakaway opportunity thwarted by the Kitchener goalie, it was clear this was going to be a battle on both ends of the ice. The goalies were exceptional, making many outstanding saves throughout the game. The difference came at about the half way mark when two Kitchener players collided with each other sending Larry Stordahl off on a 2 on 0 breakaway. Larrry finished the deal with a deke for a 1-0 lead. Only Charlie Holland’s hot hand in the last part of the game kept the Ranger’s off the board for a well-fought and well-deserved 1-0 win. 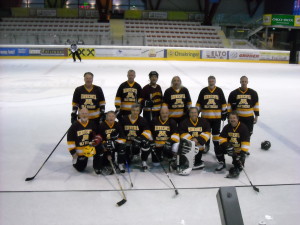 Game 4 vs Ravensburg, Germany. With a 7:00 am game time the next morning (ouch), it was no surprise that both teams were a bit sluggish out of the gate. It’s probable that some of the late evening festivities the night before in celebration of the Kitchener win contributed a bit to the slow start. Frank Schreiner started the scoring when he walked in from the point and found the top corner of the net. This held up until late in the first half when Minnesota score twice and Ravensburg once. With the score 3-1 entering the final half, the team woke up and the scoring barrage began. Eight unanswered goals finished the tired and over-matched Ravensburg team. Almost everyone got into the scoring act with several players scoring multiple goals…including, to everyone’s enjoyment, Professor Epp. Final, an 11-1 win and the gold medal with a perfect 4-0 record. 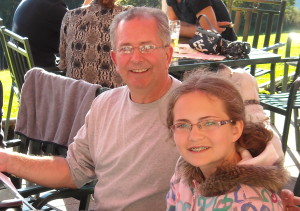 MVP, MVP. While there was no mention or official discussion about an MVP, it was the consensus of all the players that the goalie, Charlie Holland, was the overwhelming choice. His stalwart and sometimes spectacular play in the first three games clearly allowed the team to succeed and “hang on” in those tight games. He only gave up 2 goals in the entire four games. A close second was either Larry Stordahl, who at 70 years of age showed his scoring prowess by scoring the winning goal in all four games, or, the defensive play of the team. While the goaltending and scoring was most evident, overall team defense likely was the foundation for the impressive tournament finish.

As the players and their spouses/significant others had most of the final game day to relax and prepare for their post-tourney plans, it was clear that all enjoyed the social aspect of the experience as much as the competition on the ice. It’s nice to win, but most everyone talked about how nice it was to meet new friends and enjoy new places together…great hockey, even better company. The team finished up in the evening by going to the 12th century Kaprun Castle near Zell for the post tournament banquet for all the participating teams. The next day it was off to all parts of Europe; Copenhagen, Salzburg, Munich, Milan and many other cities in Austria and Italy.

You can bet many of these players will be back in 2014 for another European experience. It’s also likely that a permanent connection between Colorado and Minnesota hockey players has been established. Neither group will soon forget about the Professor either.

The Other Story: The Hawgs – Hockey and Riding Club

John Molenar related this story about the history of the Colorado Hawgs. 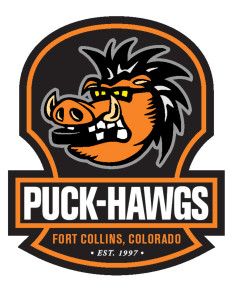 It’s Feb 1987 and Ft Collins finally opens an indoor ice rink. John and Mike Siler started playing against each other and together in Ft Collins men’s leagues and various local tournaments. Frank Schreiner moved to Ft Collins in the mid 90’s and they began playing with and against him. Frank had played in Denver with Tom Davis. In 1997 Mike officially started the “Puck Hogs” (note spelling), when he bought some yellow jerseys for the group to use in tournaments and inline hockey. Around 2000 John started talking to the boys about them getting back into riding motorcycles. John hadn’t ever been without one since he was 18 and he especially liked the Harleys. The group originally rented bikes for their rides but eventually all bought their own. In 2003 they renamed the “Puck Hogs” to “Puck Hawgs” and had one of the guys who is a graphic artist create a Harley-looking logo, coming up with the current Puck Hawgs patch.

This summer the Puck Hawgs celebrated their 15th anniversary with a party and by brewing 5 Barrels of “Perfectly Legal Lager” at Odell’s micro-brewery in Ft Collins. It turns out one of the players (Brendan) is the head brew master of Odell: Odell Brewing.

Looking for a Road Trip, Adult or Youth? Try Austria!