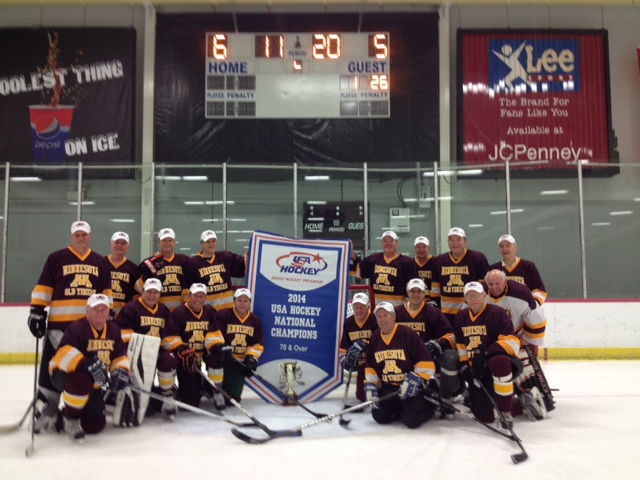 The USA Hockey Adult National Championships offer a great opportunity for adult teams (men and women) across the country to compete at both the elite (Tier I) and recreational (Tier II) levels of hockey.  The Minnesota adult teams have been participating since the tournament started several years ago and they continue to set the bar high for other teams around the country.

This year, at least 6 men’s teams from Minnesota traveled to Tampa, FL and the surrounding area and faced off in 5 different age groups on consecutive weekends.

70+.  This was the first year for this age group.  Four teams participated.  It’s remarkable that there are enough passionate and physically able players at this age that want to compete, but age does not seem to be a barrier for those that love the game and enjoy the travel.  The Minnesota Old Timers, previously champions at the 60+ and 65+ age division, moved up to the 70+ division and won the championship in a tough overtime game, 6-5, against the Florida Everblades.  They were sponsored by the Heartland Hockey Camp, located in the Brainerd Lakes vacation area of Minnesota.

65+.  It wasn’t a surprise that two perennial Minnesota champions at the 60+ and 65+ age division played for the championship game. 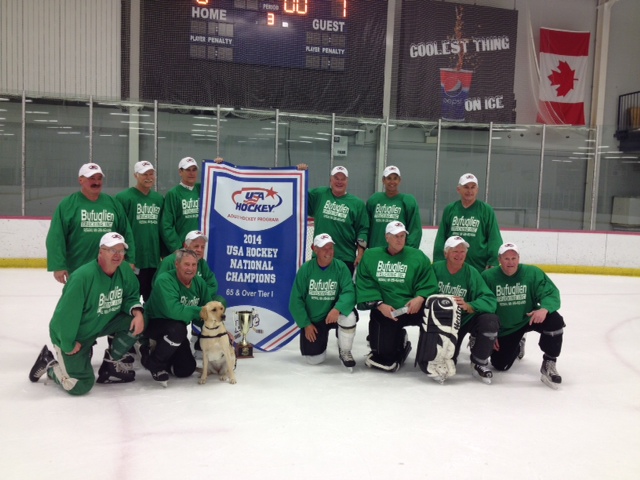 Byfuglien Trucking from Roseau, MN, winner of the last five 60+ USA National championships, moved up to 65+ this year.  Their long-time rivals from the metro area (remnants of the Minnesota Old Timers), and sponsored this year by Heartland Hockey Camp, were the only Tier I teams in the division.  With only two elite teams, USA Hockey pitted them against the recreational teams in pool play as exhibition games only.  The championship game was one game, easily won by Byfuglien Trucking, 6-0.  Bob Lund’s Byfuglien powerhouse continues to gather championship banners and the treasured white hats.

60+, Tier II.  There were no Tier I teams in this age bracket this year, but Swann’s, a team based at the Blaine SuperRink, played in the Tier II tournament.  They failed to make it to championship Sunday.

50+, Tier I.  Clearly one of the showcase age groups, the 50+ Tier I tournament featured many ex Div I, Div III and pro (as in NHL) players from around the country.  Their speed and level of skill play was more than impressive for this age group.  While the USA Hockey Adult tournaments are “no-check”, there was plenty of body contact in the up and down frenzied pace of play.  The Heartland Hockey Camp team, along with the Sun Valley Suns earned the right to play on championship Sunday after finishing 1 and 2, respectively, in pool play, and they really put on a show.  While Heartland beat Sun Valley in the earlier round, Sun Valley came from behind in the 3rd period to tie the score 1-1 with just seconds left in the game and went on to win 2-1 in overtime.

50+, Tier II.  The Minnesota No Stars, out of the Minneapolis area, played in the Tier II tournament, but failed to make it to championship Sunday.

For scores, schedules, standings and other information on the 2014 Men’s tournaments and to follow the Women’s tournament, visit the USA Adult Hockey site here.