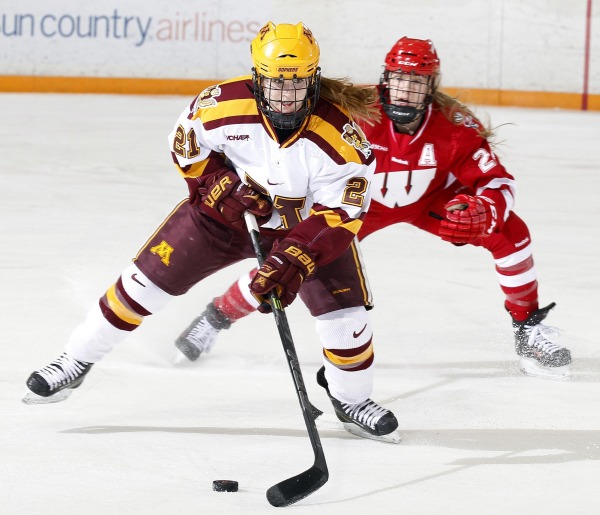 Minnesota’s Dani Cameranesi’s goal and assist helped lift the No. 2 Gophers over No. 3 Wisconsin on Saturday afternoon at Ridder Arena. (Photo / University of Minnesota Athletics)

Dani Cameranesi needed two third period goals this time to break the doors open against third ranked Wisconsin, but the result is the same. Add another win for the University of Minnesota women’s hockey team onto the streak against its border rivals to the East.

All three members of Minnesota’s top line had multiple points, overcoming an opening barrage by the Badgers to defeat the University of Wisconsin 4-1 in a game much closer than the final score indicates.

Besides Cameranesi, Hannah Brandt scored the go-ahead goal in the second period. Maryanne Menefee assisted on all three of her linemates’ goal. All came after the Badgers matched Minnesota (19-1-2, 12-1-2-0 WCHA) in effort throughout the first forty minutes and tied the score in the second period.

“I think in the first period we started off a little slow,” said Cameranesi. “In that rest after the first period we kind of came in and talked it out. We kind of decided that we needed to put a little more effort and do whatever we could to get pucks on net and hope one finds the back of the net.”

“A great win. I’m really proud of our kids and the effort they put forth tonight,” Gopher coach Brad Frost said after the game. “I thought Amanda Leveille was tremendous, really setting the tone for us on that turnover five seconds in. Made a great save there and obviously played great. Our big time players stepped up again here tonight with Cameranesi and Brandt and Menefee in particular.”

Both teams came out swinging early. #2 Minnesota and #3 Wisconsin did not need any time to feel the other out, instead bringing physicality fit for the rivalry. Long stretches of the opening period were spent going back and forth up and down the ice without a whistle.

The Badgers began the game by taking advantage of a Minnesota turnover and forced Leveille to make two or three tough saves ten seconds into the game.

“Wisconsin is a great team and we knew that,” said Leveille, who made 23 saves en route to being named the game’s first star. “It was kind of a lucky bounce that it didn’t go into the net on the first shot. That was good on our part and I think Hannah cleared it behind me.”

“We all got our nervous jitters out of the way right on that play.”

After back and forth play for most of the first period, it was a fortunate bounce late that kept the two teams from a scoreless opening twenty. With just over a minute remaining, Cara Piazza got the puck after a Wisconsin defender tripped over the referee. The Minnesota freshman dove around Badgers goaltender Ann-Renee Desbiens to make it 1-0 and celebrate with her teammates.

“You know it was a case when she ran into the referee and a mistake, but we got a power play to make it 1-1,” Wisconsin coach Mark Johnson said. “We had chances. We just have to dig down a little deeper and get a little bit more.”

Wisconsin got puck luck of its own, however. Leveille was called for delay of game when she took her helmet off to stop play with 9:29 remaining in the second in order to get her blocker. It was a move the junior admitted was “a mini brain fart.”

The end result was senior Karley Sylvester, the lone Minnesotan in the Badgers lineup, tying the game on the power play when she got the puck on her stick off a rebound and buried it for her ninth goal of the season.

Sylvester’s goal with 8:56 left in the second period marked both Wisconsin’s high point and the moment the Gophers top line took over.

Hannah Brandt skated from behind the net into the slot with a shot to re-take the lead 4:50 later. Cameranesi’s goals, one coming off a deke and move and the other from a Rachel Ramsey shot that went off a few bodies, padded the lead. Playing its third game since Sunday against a fresh opponent , Minnesota out-shot the Badgers 12-4 in the final period.

“No game has been easy in those 14,” Frost said. “Our big time players step up and we find a way to win or at least we have in the last 14 games. Any given night we know what these guys can do to us.

Minnesota and Wisconsin play again Sunday at 2:00 p.m. CT. The Badgers hold a 2 point lead in the WCHA standings (games are worth 3 on the women’s side) so a fifteenth win would put the Gophers ahead.